The Algoma Central Corporation traces it orgins to 1899 when the Algoma Central Railway Company was founded in Sault St.Marie, ON. Reorganizations and reconstitutions have resulted in the present day company that is the largest owner of Canadian flagged ships, also with significant holdings in international shipping. The company has direct ownership of 22 Canadian bulkers, 8 Canadian tankers, 7 foreign flag bulkers and participates in joint ventures with the Luxembourg Company Nova Marine Carriers SA to operate more than 40 small bulk carriers, including three Canadian flag cement carriers.

Many of the company's ships were named by fusing the prefix "Algo" with a theme related to the ship's trade such as -steel, -rail, or even -wood. Nowadays the domestic and foreign bulk fleets use the entire word "Algoma" in the ship's name, or have named the ship for a person. Algoma Tankers Co Ltd was founded in 1998 when Algoma acquired the Imperial Oil tanker fleet, and renamed the ships. Since then it has rebuilt the fleet and usually maintained the "Algo" prefix tradition.

The arrival in Halifax on Friday May 20 of the tanker Algosea from Nanticoke, ON with refined product for Imperial Oil, reminded me that it is the third Algoma ship to carry the name.

As a Great Lakes shipping company almost exclusively, they rarely had ships running as far east as the Gulf of St.Lawrence, and into ocean waters. When they acquired the bulk carrier Brooknes in 1976 it was a major departure. The ship, built in 1970 at Lithgow's East Yard in Port Glasgow Scotland was rebuilt in 1976 with a new, longer mid-body and wheelhouse by Swan Hunter Ship Repairers in North Shields. It then crossed the Atlantic to Port Colborne, ON where it was fitted with self-unloading machinery. At the end of that season it was assigned to ocean work, and so its new name, Algosea, was entirely appropriate. 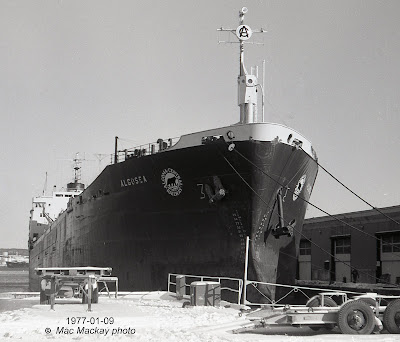 The ship was re-engined in Saint John, NB in 1981, received a new bulbous bow structure at Port Arthur in 1982 and was then renamed Saunière to operate a long term charter carrying salt from the Magdalen Islands. The ship received major hull work in 1999, 2001 and 2007 and was retired in December 2009. In June 2011 the ship was towed to Aliaga, Turkey and scrapped. 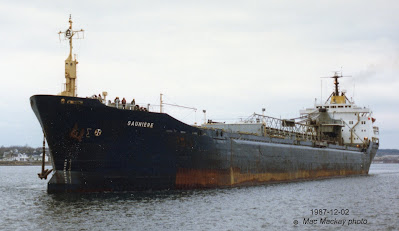 The first Algosea was better known in Halifax as Saunière. When not employed carrying salt, it often came here to load gypsum.

The second Algosea only carried the name very briefly. Built in 1983 by Port Weller Dry Dock as the Canadian Ambassador it was a Seaway size self-unloader. In 1986 it was reflagged to Vanuatu and worked internationally in the CSL pool but was owned by Marbulk, a subsidiary of Upper Lakes Shipping. Algoma bought 50% of Marbulk in 1997 and in 2000 CSL bought the remaining 50% from Upper Lakes.

In February 2000 the ship delivered a cargo of coal from Venezuela to Pier 9C in Halifax. The cargo was trucked to Brookfield, NS as fuel for the Lafarge cement plant.

After unloading, the ship went into refit at Halifax Shipyard where on April 13, 2000 it was renamed Algosea and re-registered Canadian, with Halifax as the port of registry. It operated for Algoma on the Great Lakes in the year 2000 season. 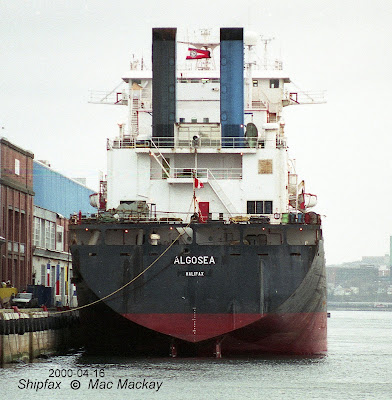 Then on December 21, 2000 while at Trois-Rivières, QC it was named Ambassaor again under Vanuatu flag, and resumed foreign trade in the CSL pool.

In late 2012 the ship was sold to Indonesian owners and in 2013 renamed Pramudita. It was under that name, while unloading coal in Banten, Java, in September 2013, that fire gutted the superstructure and conveyor system.  The hull and engine also received severe damage and it was declared a total loss. The ship was renamed Pramuda for the delivery trip to Gadani Beach where it was broken up in November 2014.

This brings us to the third and current Algosea.

Alabama Shipyard in Mobile, AB delivered the 11,290 gt, 16,775 dwt chemical tanker Aggersborg to Danish owners Dannebrog in 1998. A double hulled ship with phenolic epoxy coated tanks it went into international service under Danish flag. Algoma acquired the ship in the first quarter of 2005 and it arrived in Halifax from the Middle East on June 13, 2005. 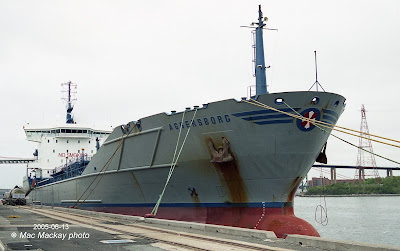 The ship underwent a "Canadianization" at Pier 9B, which included fitting it for the St.Lawrence Seaway. New fairleads were installed, and a stern anchor, but the most noticeable work was to trim back the ship's prominent bridge wings, so that they did not project beyond the ship's hull. (Bridge wings could be damaged when ships use the Seaway locks.) That paring reduced the ships gt to 11,285.

The work was completed by July and the ship sailed July 26, 2005 as the third Algosea. 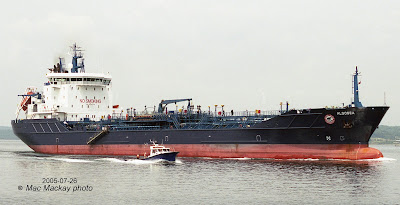 Since then the ship has been in almost constant operation for Algoma, however as it nears the 25 year mark, its days may be numbered as other ships of similar vintage are going to third world operators or the scrappers. The former Maria Desgagnés, built in 1999, sailed from Montreal on May 17 under its new named Aram Khachaturian with the destination an unnamed port in (perhaps) China. Its Lloyd's certification was suspended in March, and it was detained 25 days by Port State Control for undisclosed deficiencies while under Panamanian flag. 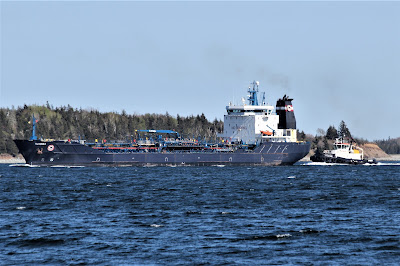 The tug Atlantic Willow catches up to the Algosea to assist in berthing at Imperial Oil, May 20, 2022.

The Algosea [iii] sailed from Halifax May 21 for Sarnia, ON.

It sister ship, built by the same shipyard as Amalienborg, also in 1998, was acquired by Algoma Tankers in 2006 and was renamed Algoma Hansa. It traded under foreign flag until 2013. It also received a similar bridge wing trim and other work in Halifax in 2013 but did not come under Canadian flag until 2014. Since then it has confined itself to the Great Lakes / St.Lawrence region.