There was very thick fog in the harbour, but as usual the camera (wiith a little photo editing) sees better than the human eye. 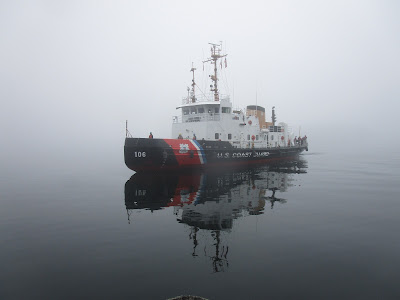 The glassy looking water made for excellent reflections, as there was not a breath of wind.

USCGC Morro Bay was built in 1980 by Tacoma Shipbuilding, and commissioned in 1981. Although named for a bay in California, it was stationed in northeastern US ports until 2014 when it was transferred to Cleveland, OH. It exited the Great Lakes through the St.Lawrence Seaway on May 16 and is likely bound for the USCG's maintenance base at Curtis Bay in Baltimore. However the almost perfect condition of its hull paint would suggest it is not due for a refit any time soon. 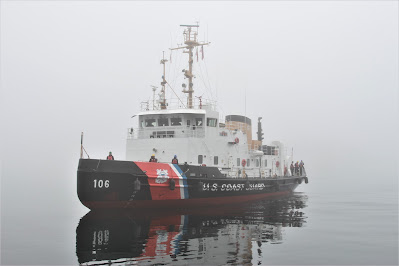