Back to Busy - amended

After yesterday's big visitor at PSA Halifax's Atlantic Hub, CMA CGM Magellan (13,880 TEU - sorry no photo) the facility was busy again today, with the Oceanex Connaigra in for Newfoundland cargo. While Oceanex Sanderling is in Amsterdam for refit the Connaigra provides RoRo service once every two weeks, as it alternates with Ocean Avalon (no RoRo) on the Montreal / St.John's and Halifax / St.John's routes. There were a lot of truck trailers waiting for the ship this time, in addition to the usual containers. [Oceanex is no longer showing a June 15 return to service of Oceanex Sanderling in its on-line schedule - it now shows July 8 as Voyage 1 from Halifax to St.John's.] 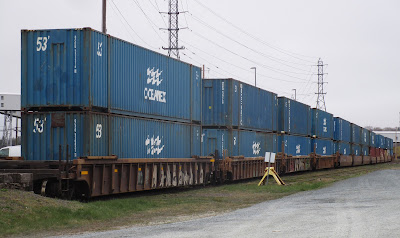 The PSA Atlantic Hub was also expecting the arrival of MSC Shanghai on an "unscheduled call", so they diverted the MSC Sao Paulo to Fairview Cove, now also under PSA management. 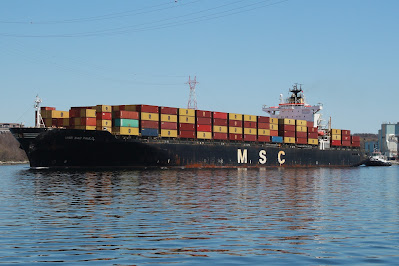 MSC Sao Paulo, built in 1998 by Hyundai, Ulsan, 53,324 gt, 63,537 dwt, has a capacity of 4688 TEU. It was built as CSAV Pyrenees and carried the name Pohang briefly in 2013 (under Laiesz ownership, the once famous "Flying P" line of square riggers) until adopting its current name. The ship serves MSC's Canada Express I service from Italy and is inbound from Gioia Tauro. After off loading some containers to reduce draft, it will head for Montreal.
Whether these drop offs and top ups will move to Fairview Cove now that both terminals are under common management has not been announced. This may be a once only.
The other expected MSC ship arrived in late afternoon, and anchored for CFIA inspection. It is expected to move alongside early this evening. 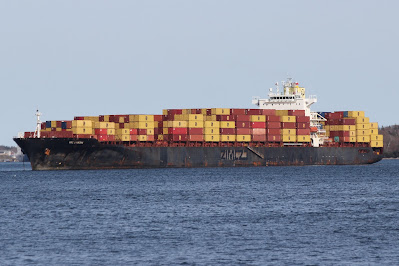 MSC Shanghai was renamed just last year after nearly twenty years as ZIM Shanghai. (The ZIM banner is still visible on the ship's side. Built by Hyundai Ulsan in 2002 it is a 53,453 gt, 66,685 dwt vessel with a capacity of 4839 TEU. It arrived from Malaga, Spain, so may be a "sweeper" or an "extra" to meet added demand. The ship was once a regular caller in Halfax as ZIM Shanghai. See what it looked like June 18, 2011, here: Shipfax 2011
Amendment:The ship is apparenelt on the new service from Turkey and Greece. 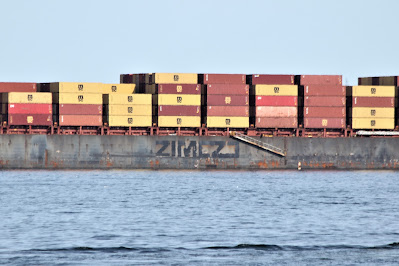 PSA was not the only busy operator today, as Autoport was going full out. Morning Lena (see yesterday's post) sailed late this morning, and its place was taken almost immediately by Supreme Ace. 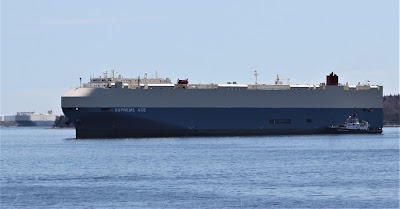 Supreme Ace took a big loop around number one anchorage to make room for Morning Lena (in the background) to clear Eastern Passage.
The ship was built in 2011 by Minami-Nippon in Shitane and is 59,022 gt, 18,384 dwt. In a reversal of the usual autocarrier routing it arrived from Davisville, RI and sailed for Emden, Germany. It took another loop through number one anchorage outbound to clear the MSC Shanghai. 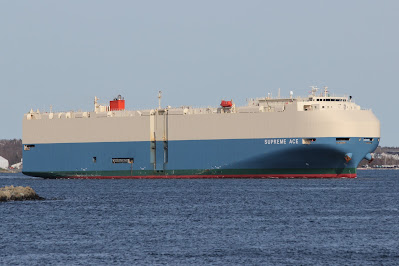 At the same time it made a neat passing arrangement with Oceanex Connaigra which was on its way to occupy the Autoport berth.

As if that were not enough business for Autoport, another ship was "lurking" offshore waiting its turn. Lake Wanaka is due tomorrow. 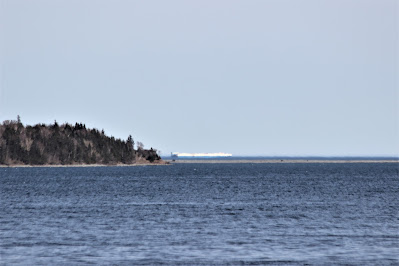 Bonus Feature
Now for a complete change of pace: Today was moving day for Sackville, Canada's Naval War Memorial. Each year,  just before the Victoria Day weekend, Sackville moves from its winter berth at HMC Dockyard to Sackville Landing where it is open to the public in the summer. No longer self-propelled, the World War II corvette relies on Dockyard tugs to make the move, which usually involves a short "tour" of the harbour around George's Island. 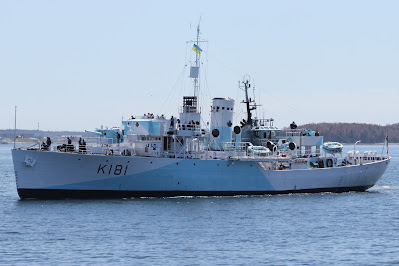 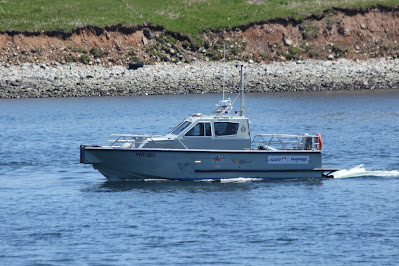 Also on the move this morning was the RCN sailing ketch HMCS Oriole. 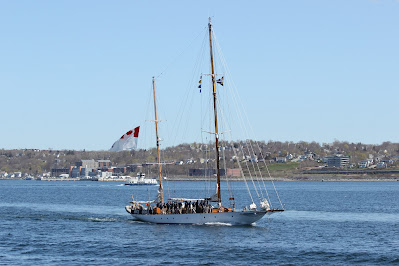 It has the honour of being the oldest vessel in commission in the RCN (and the longest serving). Built in 1921 it also saw naval service in World War II. It was transferred back to Halifax from the west coast in 2018.

Today was the first really hot day this spring, with temperatures rocketing up to the 20s C (70s F). This brought out the "yachtsmen" - the bane of harbour pilots and other mariners. 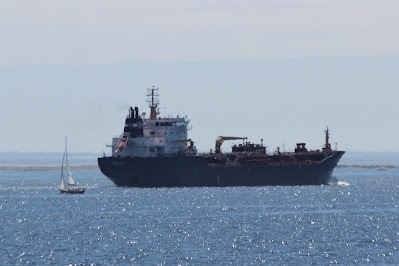 The outbound tanker Algoscotia sounded five warning blasts, twice, to warn this sailor to clear the track, but I am not sure it did any good. The sailor blithely kept his course, coming about only after the tanker had passed by.

Algoscotia had delivered a cargo from Imperial Oil's refinery in Nanticoke, ON. Nevertheless we will be paying world price for fuel at the pumps in Halifax: $190.9 / liter, but likely to go up again tomorrow.