The Bedford Institute jetty in Dartmouth was the berth for the CCGS CaptainMolly Kool when it arrived from a standby mission last evening May 29. This is  a rare visit for the St.John's based former Swedish icebreaking/supplier Vidar Viking. It was here for the first time last year May 14, 2021

Acquired with two sister ships in 2018, the 9,000 18,000 hp vessel was refitted by Chantier Davie Canada Inc in Lévis, Quebec to be a Polar Class 4 medium "interim" icebreaker and commissioned in 2019. As with all CCG vessels it is multi-tasked for Search and Rescue work. 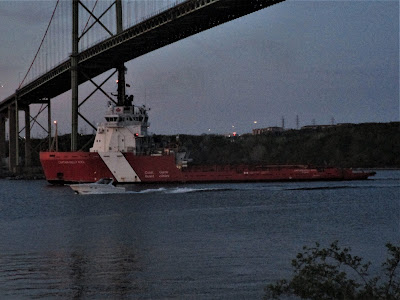 It was such a case that brought the ship to Halifax this time. The northern shrimp trawler Mersey Phoenix was holed below the water line by ice last week 90 miles off Nain, Labrador. There was ingress of water, but it was under control. Owners Mersey Seafoods directed the ship back to its base in Country Harbour, NS. CCGS Captain Molly Kool was assigned to accompany the trawler as a precaution, and so came on to Halifax. Since it was near the end of the month, it may also be doing a crew change here.

CCGS Molly Kool is based in St.John's and sister ship CCGS Jean Goodwill ex Balder Viking is based here at the Dartmouth base (and is also in port at this time.) The third vessel CCGS Vincent Massey ex Tor VIking and Tor Viking II is still at Chantier Davie and will likely emerge later this year. The conversions for CCG duty are being done in stages to allow the ships to enter service as soon as possible, with non-essentail work to be carried out in phases. The three vessels will serve until new pupose built icebreakers a can be delivered.

The factory trawler Mersey Phoenix was also in Halifax, just over a year ago, and was covered by a Shipfax post April 7, 2021