Two "Ocean" cruise ships arrived this morning, May 1, and tied up at adjacent berths.

First up was Ocean Navigator on its second visit this year. It inaugurated the 2022 cruise season on April 25. 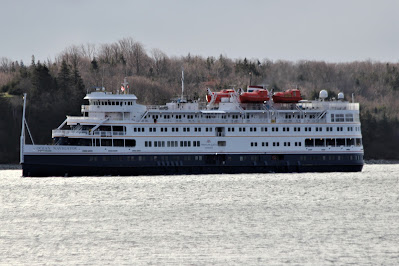 As the ship was inbound for Pier 24 I couldn't see any passengers out on deck. Despite the bright sun, perhaps the air temperature of 2 degrees C (35.6 degrees F) discouraged them somewhat.

Following soon after was the Ocean Explorer bound for Pier 23. 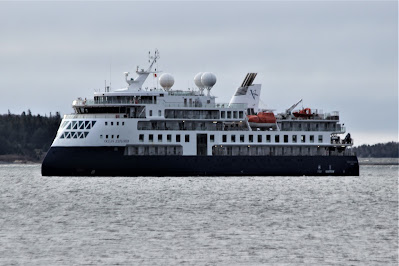 The Ocean Explorer can carry 170 passengers in eighty cabins (and only 162 beds). Unusually there are fifteen single berth cabins and some "Trilux" three bed units. Crew strenth is reported to be 70. The 8228 gt ship is also ice strengthened. Due to the tight squeeze at Pier 23, the ship took the precaution of using a tug. If the tug leaves scuff marks they will not show as much as they would on a white hull. 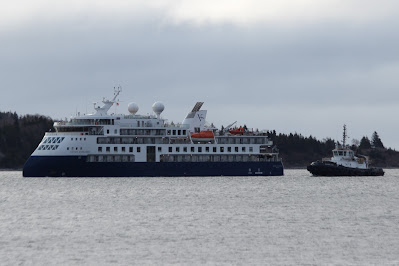 The tug Atlantic Oak comes alongside to assist in berthing at Pier 23.

The Ocean Explorer was in Nassau April 14, Freeport April 16, Palm Beach April 17, Norfolk April 21-22, and New York April 23-24. It worked its way up the New England coast to Bar Harbor April 29 and Lunenburg April 30. It then made a slow overnight passage to Halifax.