Morning Lena - gimme a break, and another Gracht

The auto carrier Morning Lena arrived this morning for a two-stop visit to Halifax. First stop is Pier 9C to offload non-auto RoRo. It then moved to Autoport to offload cars. There was a drizzly mist in the air as the ship made its way in. 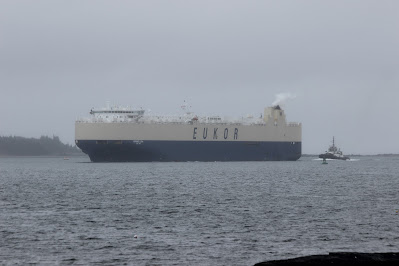 Once it reached the Narrows the air was much clearer. With 100% humidity however, the plume of water vapour from the ship's exhaust gas scrubber did not evaporate immediately. 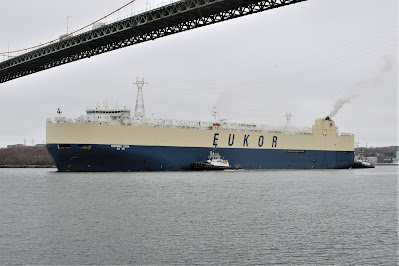 The forward tug Atlantic Bear had its line made up to an inset hull bollard, and as they passed under the MacKay bridge there was a terrific groan and the line parted with a bang. 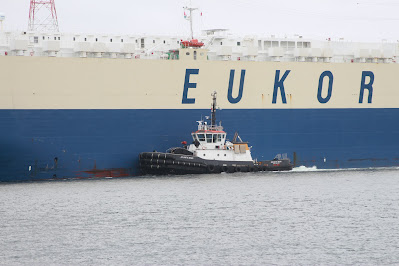 The tug was able to remain alongside to assist the ship out into Bedford Basin. From what I could see the line parted at the bight (loop), as there was no portion hanging fom the side of the ship. The tug crew rigged another line very quickly, but had not recovered the parted line which may have fetched up in the bow fender. Tugs use relatively light lines for "car boats" because they must manually loop the bight around the hull bollard. It is very hard work for one deckhand even with a "lighter" line.

The tugs assisted the ship to turn in Bedford Basin and they headed back for Pier 9C. (They must dock starboard side to the pier because of the angled stern ramp.) 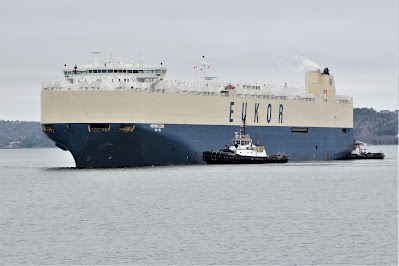 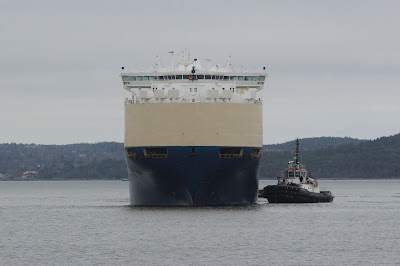 Made up with a heavier line passed around the hull bollard, Atlantic Bear is able to push and pull as needed. The parted line is still draped over the bow. 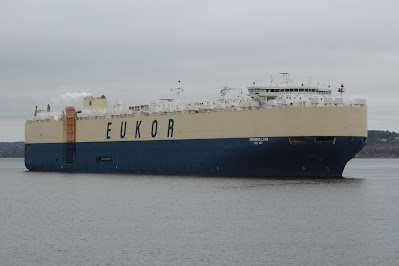 Once alongside the usual collection of miscellaneous machinery began to roll off, including the ubiquitous JCBs that seem to be part of every RoRo consignment.

Also included in the RoRo cargo were some recreational vehicles. These are also transported by ACL ships, and usually come from Germany. They are picked up in Halifax by their owners who then embark on explorations of North America.[See also companion blog Truckfax.] 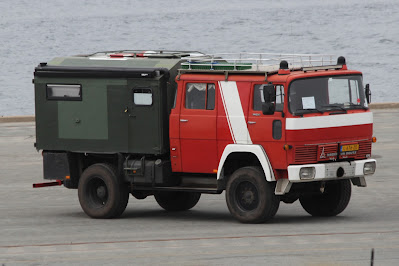 Some of the RVs are fairly brutal looking, like this Magirus-Deutz which appears to still have a red cross on its roof.

Arriving sat Pier 27 this morning was one of the Spleithoff  "S" class multi-purpose ships, the Snoekgracht. Built in 2000 by Mitsubishi, Shimonseki it is one of eleven ice classs sister ships equipped with sideloading doors and internal elevators for fork lift loading. The 16,641 gt, 21,402 dwt ships also have three cranes, one of 120 tonne, one of 90 tonne and one of 55 tonne capacity. They are thus able to carry a wide variety of bulk, breakbulk, offsize cargo and 1134 TEU containers. The tweendecks are also fitted with moveable pontoons and bulkheads and are climate controlled.

Spliethoff has developed a yacht delivery business as well and they move pleasure craft seasonally between Europe and North America, and deliver newly built boats to dealers or owners. It did not seem to be delivering any boats to Halifax this time, but did offload a grey traped heavy lift and handled some blue tarped cargo, possibly Bombardier components. 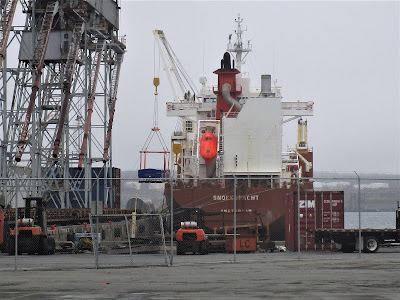 The ship has been retrofitted with an exhaust gas scrubber, enclosed in a large housing starboard side aft.

When the ship sailed for Baltimore this afternoon, it was possible to get a glimpse of some of the pleasure craft on deck. 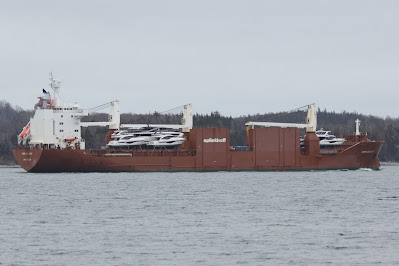 Prior to arriving in Halifax, the ship called in Sweden, Poland and England and its last port was Belfast.

(Snoekgracht - literally Pike Canal - appears to a housing development in Beuningen, Netherlands, which is built around concentric canals. The canals do not appear to be connected to navigable waterways.)