Two for MSC and one each for the rest

It was a busy day in Halifax today, Saturday, May 28, but rain and fog obscured some of the activity and made in downright unpleasant to be out.

An early morning arrival was another 15,000TEU class ship, CMA CGM Mexico, from Colombo on Ocean Alliance service run by CMA CGM, COSCO, Evergreen and OOCL. It was a pre-dawn arrival and a midnight departure, so the only view was a poor shot from the Young Avenue bridge. The ship stretches out of sight, but its bridge structure is framed by the last crane on the right. 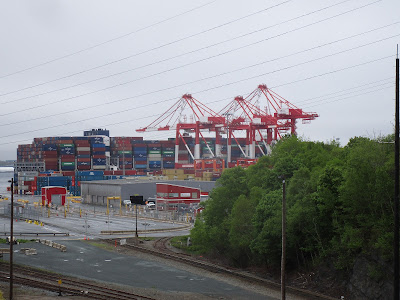 Despite its size there was still room at the southend terminal (PSA Atlantic Hub) for another ship at Pier 42, and that was the afternoon arival MSC Angela eastbound on the CANEX 2 service from Montreal to Italy and Spain. 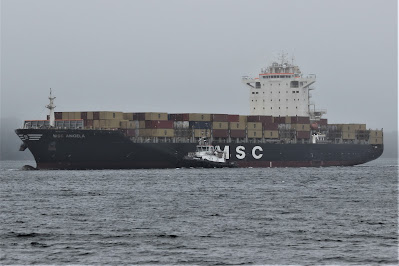 The ship dates from 2008 when it was built by Zhejiang (Yangfan) Shipbuilding Co, Ningbo. It is a 41,225 gt, 50,568 dwt vessel with a capacity of 4254 TEU, including 550 reefers. Due to draft restrictions on the St.Lawrence River, the ship is lightly loaded, but it will top up in Halifax before resuming its voyage.

MSC was also present at the other end of the harbour at Fairview Cove where MSC Mandy arrived westbound on the Canex 1 service from Italy (via Malta and Portugal). 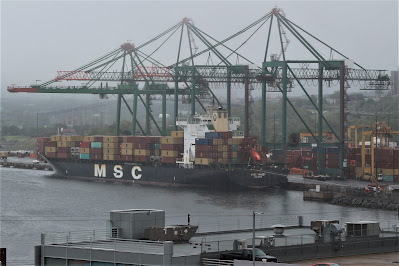 It was performing the reverse operation to its fleet mate, that is to say it was off-loading some containers to reduce draft before sailing on to Montreal. 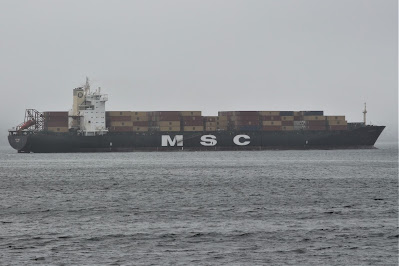 When it sailed late this afternoon, there were some large gaps in its deck load, which was no more than four tiers high.

There was also activity at Autoport, but short of a visit to that side of the harbour, the ship was barely visible. Treasure is another "classic" dating from 1999, when it was delivered by Hashihama Zosen, Tadotsu. A 58,684 gt, 21,199 dwt PCTC it is rated at up to 6100 CEU (some sources say 5718). Initially named HUAL Treasure until 2006, it then became Hoegh Treasure and in 2014, took its present name. 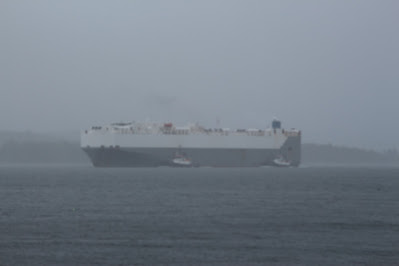 Looming through the rain and fog, the ship still betrays it previous ownership by the paint scheme. However it is now owned by Blue Arrow Navigation Ltd of Haifa and managed by ASM Maritime BV of the Netherlands. It is en route from Bremerhaven for Wallenius Wilhelmsen and will sail for US ports .

Arriving from New York and occupying an anchorage, the cement carrier NACC Providence is in port for CFIA invasive species examination. Once it has been determined to be free of LDA moth, it will likely sail for Port Daniel, QC to load for McInnes Cement. 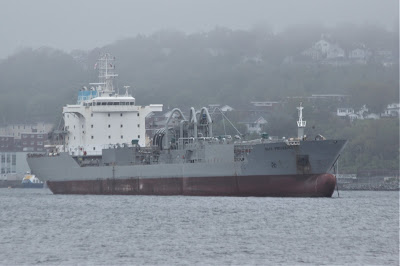 The 12,047 gt, 20,200 swt ship dates from 2006 when construction was completed by Labroy Shipbuilding and Engineering Pte Ltd in Singapore. The ship was laid down at Nahindah Mutiara Shipbuilding at Batam, Indonesia in 2005 and launched a year later, but it is unclear how much work was done there. Labroy completed the project in less than six months.It was named Glory Atlantic until February of this year.

NACC Providence is operated by Nova Algoma Cement Carriers, a joint venture between Algoma Central Corp of St.Catharines, ON and Nova, from Luxembourg. The ship is registered in Panama, and as its name implies will deliver cement to McInnes customers in the US northeast.

Meanwhile, despite the gloom and rain, Halifax Shipyard was in a festive mood for a double naming ceremony. 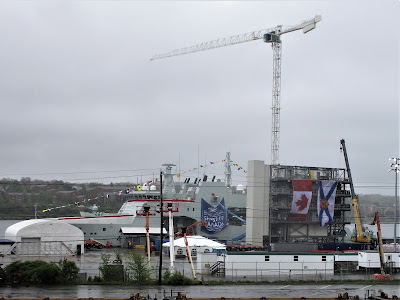 The future HMCS Max Bernays, the third Artctic Offshore Patrol Vessel, was dressed all over and various banners and bunting were on display at Pier 6 -7 in the Shipyard. A special marquee tent was also erected to keep dignitaries fresh and dry. A naval trials crew has been busy on the ship starting in January when its captain was named. So far it has been known as AOPS 3, but will now be known as Max Bernays. (The HMCS designation will not be used until it is handed over to the RCN  and commissioned.) I believe the ship will soon be sailing to its west coast base in Esquimalt before it is actually commissioned. Post acceptance trials will be held en route or after arrival in Esquimalt.

Margaret Brooke (AOPS 2), at its Pier in HMC Dockyard was similarly decked out  and will also be named officially. The ship has been in RCN hands since July 2021 and has conducted post-acceptance ice trials and warm weather trials. The badging / naming / trialing and finally commissioning is a long and complex process, particularly with the sophisticated systems in use on naval vessels. I understand the ship will be commissioned in October, on the anniversary of the loss of the Newfoundland ferry Caribou in 1942.