The ONE Majesty arrived in full daylight this morning May 5, on THE Alliance's EC5 service. (Its previous arrival February 8 was in darkness.) 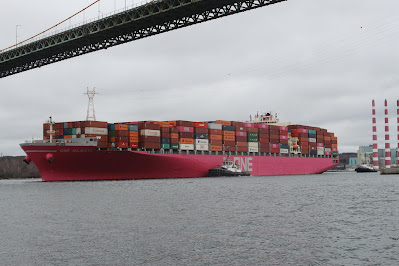 With the tug Atlantic Beaver made fast forward and Atlantic Fir aft, the ship made its way through the Narrows to Fairview Cove.

One of ten "M class" sister ships built by Mitsubishi Kobe, all of about 78,316 gt, 79,443 dwt, it has a capacity of 6724 TEU including 500 reefers. It was first named MOL Majesty but was renamed in 2021 as MOL began to fold its ships into the ONE conglomerate. Renaming was concurrent with repainting as the ships took on ONE's magenta hull colour.