The ship MSC Manya arrived at the Atlantic Hub (southend) terminal this afternoon on Voyage No. XA217. This seems to be an unscheduled extra call for the Mediterranean Shipping Company, perhaps with overflow cargo. In any event the ship's last few ports of call are not typical for MSC ships in Halifax. It was reported in Valencia April 10-11, Sines April 15, Liverpool April 19-20 and Sines again April 25-27. 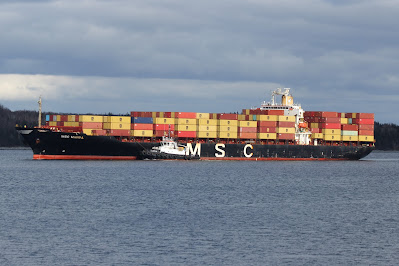 MSC Manya dates from 2003 when it was completed by Koyo Dockyard in Mihara, Japan as OOCL Melbourne. It was rnamed Taroko briefly in 2017 before taking its present name.

At 34,610 gt, 43,093 dwt it has a fairly modest capacity of 2762 TEU including 300 reefers, which is rather small for a long range carrier. However these are strange times and there is such demand for ships that there should be few surprises.