Despite having purchased scores of ships in recent months, the Mediterranean Shipping Company still has ships under charter (with non-MSC names). One such ship, named America, arrived today May 31 on the company's Indus 2 service from North India. 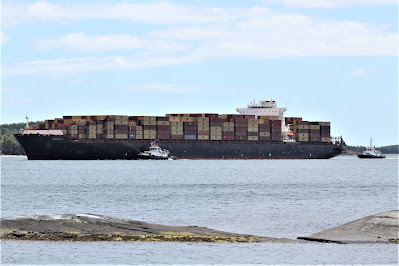 The large Cyprus based ship chartering company Danaos Corp, with a fleet of 71 ships at latest count, manages the America for Oceansprize Navigation Ltd. The ship was built in 2004 as CSCL America by Samsung, Koje, and is registered at 90,645 gt, 107,749 dwt with a capacity of 8468 TEU including 700 reefers.

The ship was renamed MSC Baltic from 2007 to 2009 then CSCL America again until 2018 when it became simply, America. 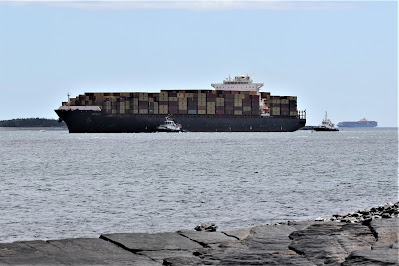 While the America was inbound, another ship was noted at anchor offshore. MOL Charisma is due tomorrow, June 1, on THE Alliance's EC5 service. It will be docking at PSA Atlantic Hub Pier 42, rather than the usual PSA Fairview Cove. Now under common management, the two terminals are relocating services to rationalize operations.