Another in the "back again" category is the Canadian owned Sedna Desgagnés which has returned from overseas trading under the Barbados flag. 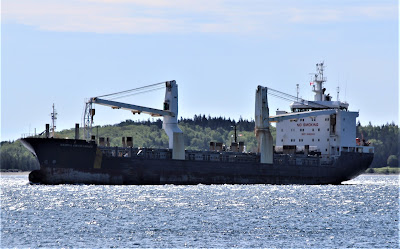 It is an annual pattern towards the end of each year, when the ship is reflagged to Barbados under a bareboat charter arrangement with BBC Chartering. When spring arrives, the ship returns to Canadian flag in preparation for northern supply work.

The ship is well equipped for that work, as it carries a pair of 180 tonne cranes, that can lift lighterage barges and tugs which are used to ferry cargo in to remote ports. 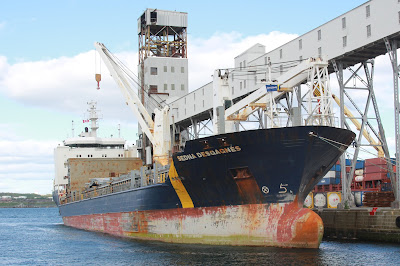 The ship was one of a series built for the German shipowner, Beluga, as the "F" class Beluga Festivity. However Beluga failed in the same year of 2009, and the ship was acquired by Transport Desgagnés, and renamed for a goddess in Inuit mythology. Builder Qingshan, Wuhan constructed the 9611 gt, 12,612 dwt multi-purpose / heavy lifter which also has a container capacity of 665 TEU.

The Sedna Desgagnés arrived this morning May 31 and tied up at Pier 25-26. Its last port was Norfolk, VA, but had recently called in Freeport, Bahamas, and Houston TX. Prior to that it had been in Brazil, France and England.