It was a return to busy days in the port today, Monday May 9. And there were three ships in port with names begining with the letter "T".

The Norwegian shipowner Wilh. Wilhelmsen is well known for giving all its ships names begining with the letter "T". However today's arrival at Autoport, the Titus, was a member of the partner company Wallenius Lines. The two companies combined their operations in 1999 and in 2017 formed Wallenius Wilhelmsen Ocean to operate a fleet or 123 or more autocarriers. Each company still owns ships, through subisidiaries and charters them to WWO. Wallenius still names its ships after operatic characters, and by coincidence their choice for this ship is the title character from Mozart's opera La Clemenza de Tito. Titus is loosely based on the Roman emperor Titus Vespasianus Augustus.

Built in 2018 by Tianjin Xingang in China, it is  a 73,358 gt, 23,889 dwt ship of the Hero class. It has a capacity of 7656 RT43 and is served by a 320 tonne capacity stern ramp.It has no side ramp. The ship was delivered in traditional Wallenius colours. It will be interesting to see if it receives WWO colours when it is drydocked next year. The current paint appears to be in good condition, so repainting may be considered an undue expense. 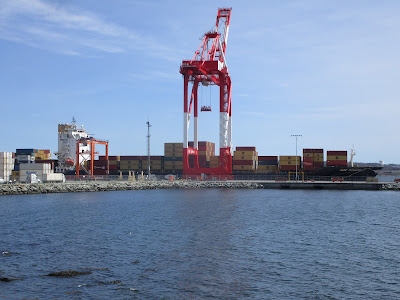 A regular caller on MSC's Canada Express 2 service, the Tamara tops up containers en route from Montreal to Italy and Spain. It will also call westbound to reduce draft for the St.Lawrence River. With a capacity of 4254 TEU including 500 reefers, it is a 41,225 gt, 50,446 dwt ship, built in 2007 by Zhejiang Yangfan Shipbuilding Co. It only required one crane to handle the loads.

Arriving at Pier 27 (now relocated from Pier 31 due to iminenent construction activity at Pier 30-31) Nirint Shipping's Trinitas is appropriately the third of today's trinity of T-ships. 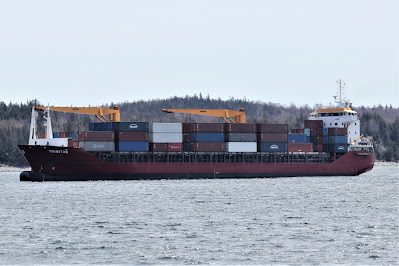 The ship is on  its regular run from Moa, Cuba for Europe and is carrying a quantity of mixed nickel sulfides to off load. It was last here March 25 of this year, when the sun was on the right side (actually the port side) for a better picture. I gave more detail on the ship in that time.

The ship's hull was built by Damean Okean, Mikolayiv, Ukraine and completed by Damen Hoogezand, Foxhol. Mykolayiv is very much in the news lately and has been under Russian attacks.