PSA Halifax's Atlantic Hub (former Halterm) was full up again today, May 3, [see yesterday's post]. With MSC Brianna at Pier 41, MSC Santhya made an early morning arrival at Pier 42. Meanwhile ZIM's Contship Leo has been anchored offshore for the last couple of days. 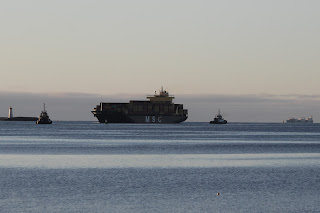 MSC Santhya is an unusual ship, partly because of its age. It was built in 1991 by Bremer Vulkan, Vegesack as Vladivostok but was quickly renamed DSR Senator. It is rare that a ship has the same name as the owner company (or vice-versa). In 1991 the East German company Deutsche Seereederei Rostock (DSR) began a cooperation with the West German company Senator Lines (itself a subsidiary of Bremer Vulkan). The two actually merged in 1994 to form DSR-Senator Lines. (Eventually Hanjin acquired 80% of the company, with F.Laiesz holding about 10%. The company was wound up in 2009, and Hanjin was declared bankrupt in 2017.)

In 2004 the ship was renamed Baykal Senator for a further charter, which lasted until 2004 when it was taken up by MSC and renamed. 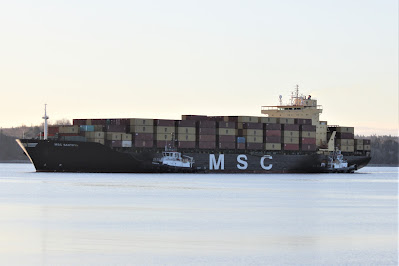 The ship serves MSC's Canada Express 1 service from Italy to Montreal. It normally stops in Sines Portugal as it last Europena stop. However it did not do so this time, sailing directly from Naples. Other MSC lines also stop in Sines, so I wonder if this is the start of a new express service from Italy. Certainly several days are shaved off by dropping Sines and calling first in Halifax before heading for Montreal. The ship would normally call in Halifax anyway to reduce draft due to St.Lawrence River restrictions, so offloading here in effect creates a true express service. The reverse would also be true when the ship calls in Halifax eastbound to "top up", allowing last minute cargo an extra day or two to get to Halifax by road or rail after the ship sails from Montreal.