With ships of various shipping lines calling eastbound and westbound in Halifax it is not unusual when two ships of the same line are here at the same time. Sometimes those ships are sister ships, and it is interesting to see two of them in port at once. So today's arrivals (May 7) of NYK Deneb and NYK Constellation in quick succession at Fairview Cove could not be called unusual. The sister ships are members of the ten ship NYK Daedalus class.

NYK Constellation completed working cargo late this afternoon, but held its berth at Fairview Cove until NYK Remus made its way to Bedford Basin. This left lots of room to pass (but I was not in suitable spot to take a photo with both ships in the frame.) 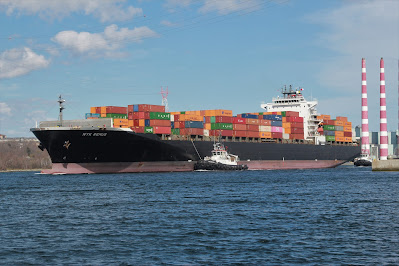 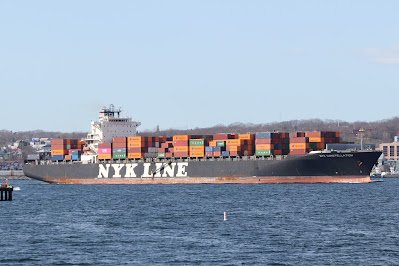 NYK Constellation outbound in the lower harbour, picking up speed.
NYK Constellation dates from 2007 when it was delivered by Hyundai Ulsan. It has the same gt of 55,534 but measures 65,919 dwt. It also has a capacity of 4922 TEU including 330 reefers,

Both ships are sailing on THE Alliance's AL5 service with NYK Remus eastbound from Vancouver, Oakland, Los Angeles, Panama and Cartagena and NYK Constellation westbound from Rotterdam, Hamburg and Antwerp for Port Everglades.

At the southend terminal, PSA's Atlantic Hub, there were to be two ships due for MSC, but they were not sister ships. First along was Seamax New Haven, reported to be on a new (but not yet announced) Turkey, Greece and Mediterranean run called Mediterranean Express (MX). Instead of docking on arrival as anticipated, the ship went to number one anchorage. This was possibly for a Canadian Food Inspection Agency inspection and clearance. 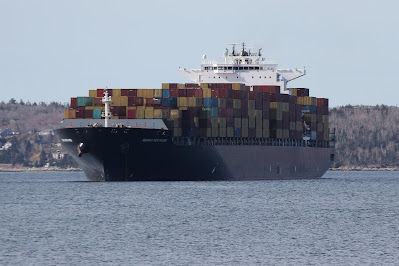 Seamax New Haven anchored in the main harbour for a few hours before going alongside.

The second MSC ship, that was intended for anchorage, instead put back to sea and will now arrive tonight. It is MSC Hong Kong, on Canada Express 2 service bound from Italy and Spain for Montreal. It is expected to reduce draft to meet St.Lawrence River restrictions by dropping some cargo here over night, then sailing early in the morning. Its departure may be too early for a photo op.