When it comes to hosting tankers at its Woodside Terminal in Dartmouth, Irving Oil gives preference to ships of its own domestic fleet. This is perfectly understandable, since domestic ships are usually in and out quite quickly as they do not discharge full cargoes. They drop off some cargo here then head for other ports such as Charlottetown or St.John's.

On Sunday May 15 the oddly named tanker Dee4 Elm arrived from Amsterdam with refined product. It went to anchor to await the arrival later in the day of Irving's own (chartered) tanker Acadian which docked on arrival. 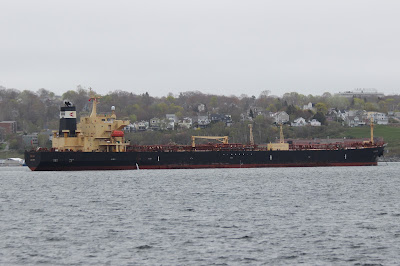 The Dee4 Elm was built in 2009 by Onomicho Zosen, in Onomichi, Japan and is a MidRange vessel of 26,900 gt, 47,401 dwt. It operated as Maersk Maya until 2018 when it was renamed Rich Wind and in 2000 took its current name. It is part of the Norient Product Pool of tankers and is managed by Synergy Maritime Private Ltd.

The ship moved in to Irving Woodside Monday evening May 16 when Acadian sailed (in fog - sorry no photo).