The Port of Halifax is accustomed to big ships. As noted here recently, the Seawall (Pier 20-22) was designed to accommodate the world's largest passenger liners when it was built in the first decades of the last century. I am sure no one then envisaged the end of the passenger liner era (thanks to jet aircraft) a half century later, nor the advent of the cruise industry. Now however that Seawall welcomes cruise ship of all sizes from moderate to monster, and the Cruise segment is one of the Port's major lines of business.

Today, May 30, the Seawall handled two moderate sized cruise ships with ease. One was the familiar Zaandam, which is in port almost weekly as it conducts seven and ten day cruises from New England to the Maritimes, Quebec and Newfoundland. Built in 2000, it carries 1432 passengers with 615 crew. It tied up at Pier 20.

Arriving at Pier 22 it was Island Princess. 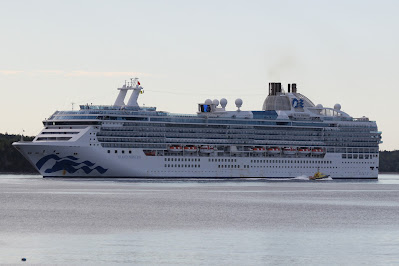 Dating from 2003 when it was delivered by Chantier de l'Atlantique, the 92,822 gt ship has a capacity of 2214 passengers and 900 crew. It is a member of the Coral class of Panamax ships.

Big ships calling in Halifax are not all passenger ships. Among the biggest are bulk carriers, such as today's arrival Berge Atlas.

It is a 90,197 gt, 180,180 dwt ship built in 2008 by Imabari Zosen in Saijo, Japan. Originally named BW Atlas it was built for the BW Group, the Singapore based successors to the large Norwegian Sigval Bergeson fleet. It was acquired and renamed in 2010 by Berge Bulk Maritime Pte Ltd, also of Singapore. ("Berge" was the first name of founder Sigval Bergeson's father.)

The ship anchored for Canadian Food Inspection Agency LDA moth examination, and once cleared headed for Sept-Iles. QC for another load of 130,000 tonnes of iron ore. The ship was also in Sept-Iles in April, and carried ore to Port Talbot, Wales and Amsterdam. Why it should require another examination is not known, since the moth is native to Asia.