No letup at Autoport

Spring is car buying season in Canada, and so the auto manufacturers are stocking up with the latest models. And as a result Autoport is busy off loading a steady stream of ships from Europe. Wallenius Wilhelmsen is the primary auto carrier line, with a regular North Atlantic service to Halifax and the US east coast. Their Toledo sailed this afternoon, May 18, after discharging RoRo cargo at Pier 9C and cars at Autoport. [see also two previous posts] 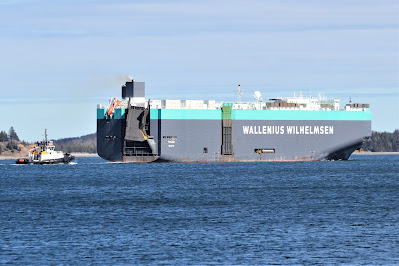 Trailing the Toledo outbound, the tug Atlantic Willow is on its way to meet the next car carrier.

When the Toledo sailed, the next inbound was taking its pilot. 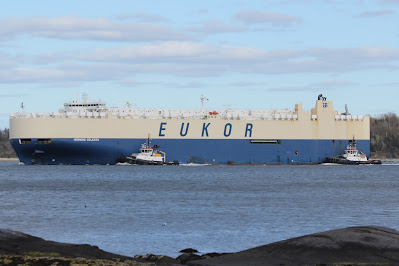 The ship is managed by Wilhelmsen Ship Management Korea Ltd. It is owned by an anonymous one ship company, Celesta Maritime Ltd, and works for Eukor, a specialist car carrier company jointly owned by various Wallenius Wilhelmsen entities, American RoRo Carriers and  European Car Carriers. its last port was Southampton, England, but before that had called in Zeebrugge and Goteborg.