PSA Halifax's southend terminal, the Atlantic Hub, was busy today, May 2, with two small ships working at Pier 42 and one medium sized ship arriving for Pier 41. 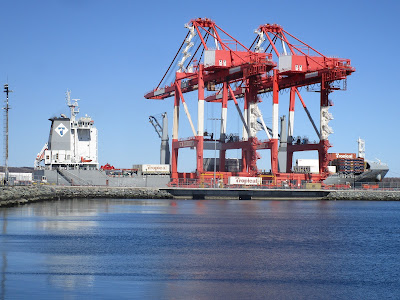 Tropic Lissette was working at Pier 42 south. Halifax is a terminal port for Tropical Shipping, so it unloads and loads a significant nimber of boxes on each trip.

With Tropical Lissette at Pier 42 south, and Eimskip's Vivienne Sheri D at Pier 42 north, there was still room at Pier 41. And it was another ship with a female name: MSC Brianna 4168 TEU. 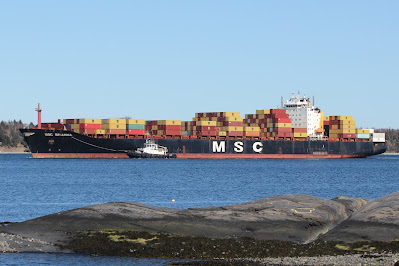 MSC Brianna arrived from Montreal to top up to deep sea draft on MSC's Canada Express 2 service to and from Italy and Spain.

There are press reports that the Mediterrean Shipping Company, MSC, will be bringing another line to Halifax. Although no official announcement has been made, the new Mediterranean Express (MX) will originate in Turkey and Greece, and after calls in Italy, Spain and Sines, Portugal, will stop in Halifax starting May 6, en route to the US. The first ship is reported to be Seamax New Haven, 8084 TEU, which was here in March on the Indus 2 service.

According to the reports I have seen, the new service will employ ships that can use either the Atlantic Hub or Fairview Cove terminal. (In other words, 9,000 TEU or less.)

MSC will also be sending an "extra loader" ship later this week. MSC Manya, 2762 TEU, is due May 5 to pick up empties and redistribute them to "needy" ports. MSC has recently passed Maersk to claim the title of world's largest container line in terms of carrying capacity.

MSC Santhya 3007 TEU is due tomorrow, May 3, on the Canada Express 1 service en route to Montreal. On this trip the ship is skipping Sines, Portugal and coming directly from Naples, making Halifax a true "express" port, rather than just a convenient place to reduce draft.

I can see MSC rationalizing its services through Halifax in a similar way as back logs now begin to plague US east coast ports too. The added perk is "two terminals - no waiting".

MSC's putty coloured boxes are the most common sights, but they also use red oxide coloured boxes too. I believe they are rentals, like this Florens Container Leasing box marked for MSC. Like other lines it also has reefer boxes that are generally white. 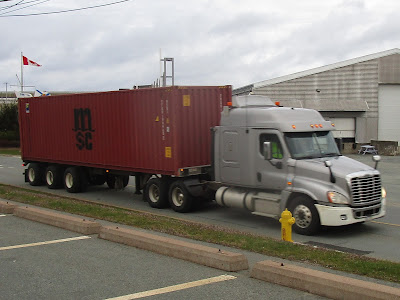