Three first timers and a regular

This morning, May 26, three ships arrived in Halifax for the first time, and two others returned for the "umpteenth" time.

The first of the regulars was the Canadian flag Nolhan Ava returning from its weekly trip to Argentia and St-Pierre. 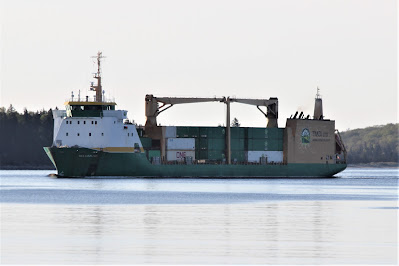 The ship carries containers and RoRo.

The next repeater was the cruise ship Zaandam, on its regular call. On its way inbound it maintained the main (eastern) channel while the first newcomer MSC Joanna slowed and took the western, deepwater, channel. Because the western channel is slightly longer, due to a dog leg, the Zaandam was able to overtake and proceed ahead to its berth. 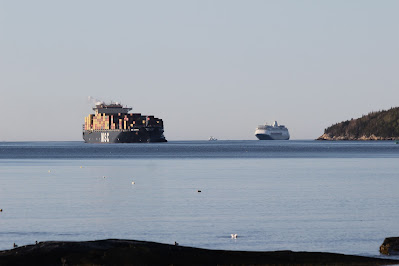 MSC Joanna was well ahead initially, but Zaandam took a shorter, faster route. 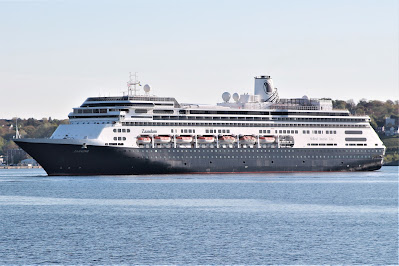 The Zaandam passed east of George's Island, and turned north of the island to come alongside Pier 22 starboard side to. 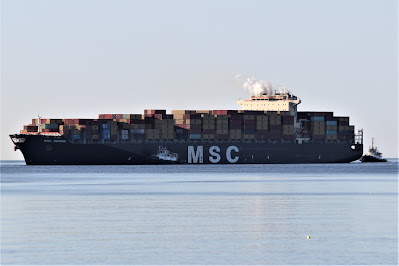 Due to its size and channel dog leg, the MSC Joanna had two tugs in attendance from well out.

Next along was the general cargo ship Pacific Dawn. Registered in the Netherlands, it was built in 2010 in Poland by the intriguingly named Partner Shipyard, in a town called Police. It is a multi-purpose type of 2981 gt, 3750 dwt, equipped with two 120 tonne capacity cranes, that can work in combination for a 240 tonne lift. 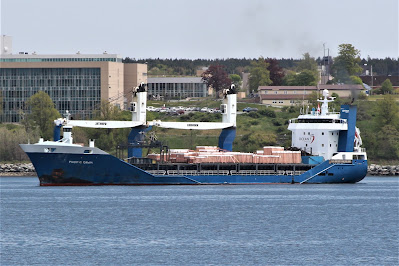 The ship is en route from Laem Chebang, Thailand to Oshawa, ON, and called in Halifax for Canadian Food Inspection Agency examination. Having been found to carry no Lymantria dispars asiatica moth larvae, the ship was cleared to sail futher into Canadian waters. It is worth noting that crated deck cargo is rare on such long journeys. The ship must have avoided bad weather successfully.

Next along was another multi-purpose type, also built in Poland. BBC Gdansk is a larger ship of 6155 gt, 7786 dwt, also fitted with a pair of 120 tonne cranes that can work in combination. It was delivered by Polnacna Shipyard in Gdansk in 2009. 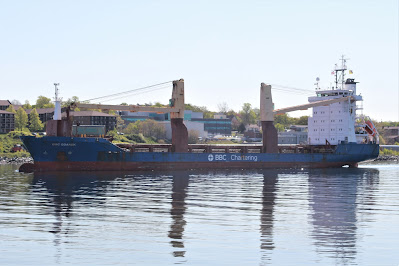 Its cargo, which consists of several lots, is all below deck, and will be off loaded at Pier 9C. Its last ports were Bremen May 1-6, Antwerp May 8-11, and Gijon, Spain, May 14. Some of the cargo may be destined for Halifax Shipyard from what I hear.