It was a very quiet day in the port with only one piloted arrival, and that was late in the day. The Tropic Hope picked up its pilot at the pilot station at 1700 hrs ADT. 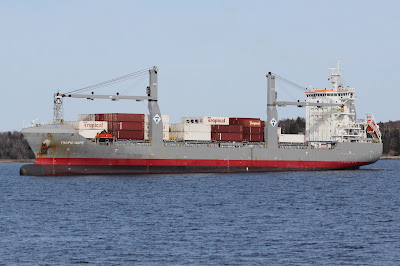 With its sister ship Tropic Lissette, Tropical Shipping operates a weekly service of out Halifax serving Florida and the Caribbean. The ships were built for the service by Guangzhou Wenchong and rate 15,215 gt, 20,313 dwt with a capacity of 1145 TEU, including 260 reefers. [An increase from early reports of 1100/200]

Tropic Hope made its first call in January 2019 and has been a regular ever since. Tropical Shipping moved its operations form Saint John to Halifax in 2017 using chartered ships until the new ships were delivered.

Tropical Lissette made its first call in September 2019. As with many ships these days they both carry women's names. Whether they are named for specific people is unknown to me, but seems likely.

Is there hope for Hope?