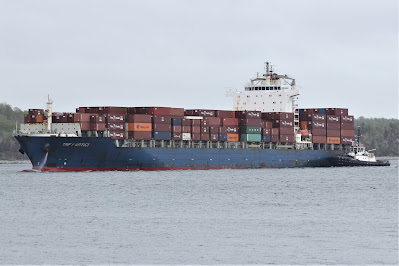 Built in 2010 by Shanghai Chengxi Shipyard it is a 35,998 gt, 41,974 dwt ship with a capacity of 3,534 TEU including 500 reefers. It carried the name Partici until 2017. As part of the Seaborn fleet it is apparently on a spot charter to ZIM, covering for other ships as it does not appear again in published schedules. ZIM uses nine ships on the ZCA service which starts in Turkey and calls in nine European ports and four North American ports: Halifax, New York, Savannah, and Norfolk. TRF Partici was previously assigned to the ZCT Turkey service (which does not call in Halifax) in 2021.

Another multi-purpose, heavy lift ship arrived for Pier 9C. BBC Destiny sails for the large BBC Chartering fleet, operated by the German company Briese Schiffahrts. It is owned by the one ship company Drago J. Shipping GmbH, part of the Jungerhans group. 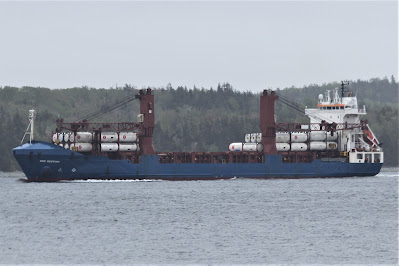 The ship arrived from Belfast, Northern Ireland with an Airbus component, which it will unload at Pier 9C. Most of these components arrive on ACL ships as RoRo cargo. Bombardier assembles Airbus aircraft and has facilities in Montreal, and Downsview, ON. Some components are built by the former Short Brothers factory in Belfast, and shipped via ACL's Liverpool port call. This particular unit may have some special characteristics that prevent the usual routing.