The Greek philosopher Aristotle (384-322 BCE) [yes I had to look it up] known as the "father of logic" [that I knew] might have appreciated the irony of a "Super-Eco" class of autocarrier. There does seem something slightly off about finding more efficient and less polluting ways to deliver cars. Instead of building them near where people live, you can ship them half way round the world in Eco friendly ships, to compete with local gas guzzlers. (As the driver of a gas guzzler myself - I hope not to sound too self-righteous here.)

Volkswagen sells its many brands of cars and trucks world wide, while at the same time establishing corporate carbon reduction goals - that is before the vehicles are handed over to owners. In chartering new Pure Car and Truck Carriers from Siem Car Carriers, VW's engine manufacturing arm MAN developed a dual fuel engine that can power the ships solely with LNG for an entire round trip from Europe to North America. It can also burn regular fuel if necessary. In LNG mode it shows substantial reductions in emissions and will help VW reach its 30% carbon reduction goal by 2025. I doubt they will be around to assist in reaching carbon neutral by 2050, but perhaps new systems will be available by then. 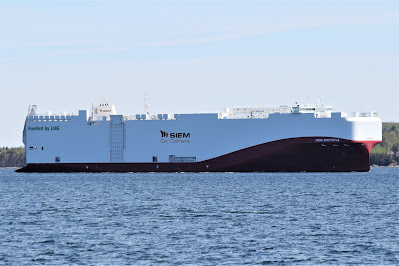 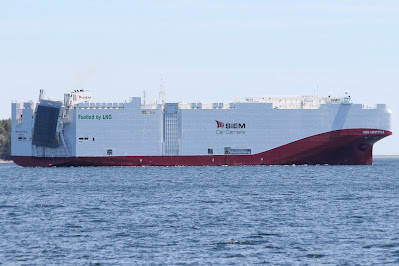 The ship's normal loading port is Emden, Germany, where it can be refueled with LNG. The ship has also refueled in Jacksonville, FL, its last US port before its terminus in Veracruz, Mexico. On leaving Halifax today the ship gave its destination as Baltimore. It also calls in Davisville, RI.