The Capesize bulk carrier Linda Hope made a brief call in Halifax today, May 23, and was soon on its way again. The ship apparently received clearance from the Canadian Food Inspection Agency (CFIA) once it was found to be free of Lymantria dispar asiatica (LDA) an invasive species of moth that could infest Canadian coniferous forests. 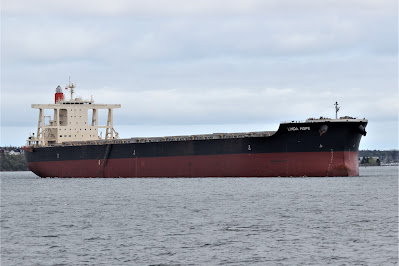 The ship is obviously in ballast, and represents quite a climb for pilots and inspectors wishing to come aboard. Its immense open bridge wings are well supported with two stanchions each.

The ship is operated by Toyo Sangyo (also known as TOSCO) of Imabari City, Japan, a company with fifty bulk carriers in the coal, ore and wood chip trades. It is interesting to follow this ship as it made its way around the world. Itaqui, Brazil, March 26-April 1; Ponta Madeira, Brazil April 1-3; Isdemir, Turkey April 26- May 3; Gibraltar West anchorage May 11.

On sailing from Halifax the ship gave Port Cartier, QC as its destination. That is a major iron loading port on the north shore of the St.Lawrence River, 60km from Sept-Iles, operated by Arcelor Mittal Mines of Canada (formerly Québec-Cartier Mining Company). The iron ore comes by rail from the company's mine in Fermont, QC and is pelletized in Port Cartier.The port also has grain storage and shipping facilities operated by Les Silos Port-Cartier, a division of Louis Dreyfus Commodities Canada Ltd.

Once it loads at Port-Cartier the ship is likely to head for Europe again, but Asia is also a possibility.