The Queen Mary bollard - what's in a name [Part One]

A substantial piece of cast iron on the north corner of the seawall at Pier 20 looks like a fairly utilitarian piece of hardware, but over time it has acquired a name. Known as the "Queen Mary bollard" it deserves more attention than the recent coat of yellow paint gives it. 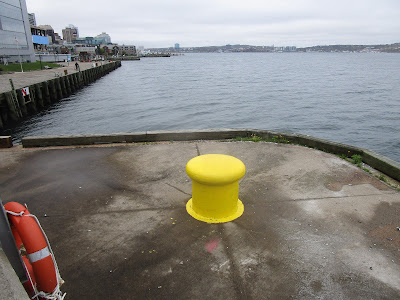 It is difficult to gauge the size of the bollard because it is now fenced off for saferty, however compared to other bollards that creep into my photos, it is much larger. A "sister" Queen Mary bollard is in place at the very south end of the seawall at the Pier 22-23 corner. It can be seen in the background in comparison to the longshoremen standing by for line handling on the arrival of the Silver Cloud on May 14. 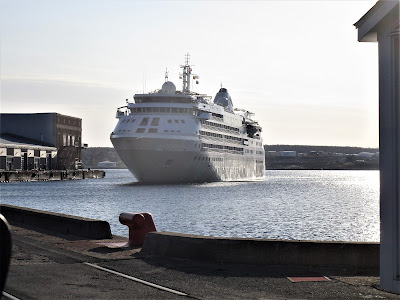 The typical bollard (like the one in the foreground in the above photo) is set into the pier face and has two "horns" that prevent ship's lines from slipping off. 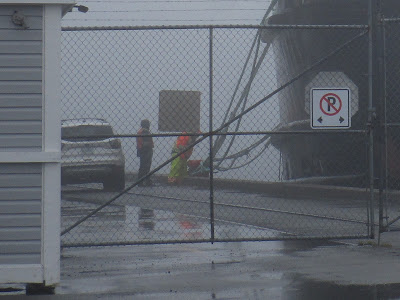 Several sets of lines may be run to the same bollard and sometimes pose quite a tangle for longhoremen to cast off when a ship sails.

The Queen Mary bollards however are essentially cylindrical with a "mushroom" top. Their main feature is not visible - it is that they are set very deep into the pier structure and are meant to withstand huge stresses from the lines of very big ships. 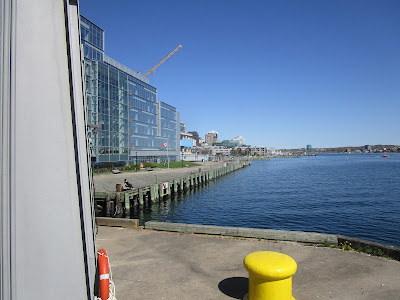 Much has changed on the waterfront since the bollard was first installed. We now have a pedestrian boardwalk, replacing numerous industrial facilites, and an office building conversion of the former power plant. 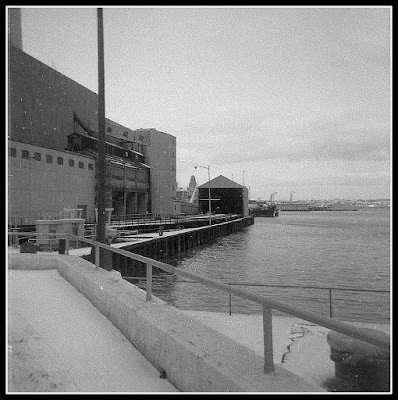 An attractve safety fence does not obstruct the view unduly - except for a camera. 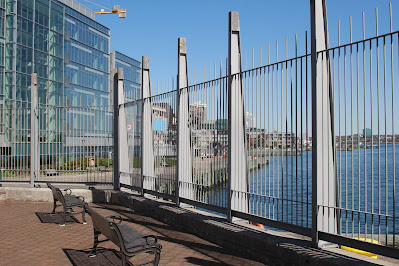 Although they have taken on the "Queen Mary" sobriquet, the big bollards likely pre-date that "Queen of the North Atlantic" by twenty-five years or so.

The (first) Queen Mary was built on the Clyde in 1936, and set an Atlantic speed record on its maiden voyage - the first ship to average more than 30 knots westbound - winning the Blue Riband. When the French ship Normandie set a new speed record, the Queen Mary promptly re-won the Blue Riband. It served as a troop ship in World War II and because of its great speed it usually sailed without naval escort. It was the world's largest passenger ship when built, at 80,774 gt, measuring 1019 ft long over all (310.7m] and 118 ft [36 m] breadth.

The Seawall (Pier 20-22) was designed in the early teens of the 20th century as part of the huge Ocean Terminals project. Construction started in 1912, continued through World War I and after the Halifax Explosion in 1917, with final completion in 1928. The development of the new port area, including the passenger and Immigration facility was intended to accomodate the largest ships of the day. Dock hardware was designed accordingly, and these large bollards were likely part of the original infrastructure.

I think the term "Queen Mary bollards" was likely given by the longshoremen as a means of denoting size. The ship Queen Mary was large and so were the bollards. The Queen Mary did call (rarely) in Halifax, as did her fleet mate, the larger Queen Elizabeth, in regular passenger service, but also as troop ships.They certainly would have used these bollards, and needed fixtures of their great size and strength.

The original Queen Mary was retired in 1967 and is preserved at Long Beach, California (although its survival is in question.) It would be interesting to know what sort of bollards it uses at its berth there.

The current holder of the name, Queen Mary 2 is a vastly larger ship at 149,215 gt, 1132 ft [345.03m] length overall x 135' [41m breadth] and usually calls in Halifax a couple of times each year during the cruise season. [2021 was the first year a Cunard passenger ship has not called in Halifax probably since since 1840 and Cunard's first steamship the Unicorn.] The Queen Mary 2 uses one of the Queen Mary bollards, but may also employ an even larger structure installed more recently at the Tall Ships Quay. 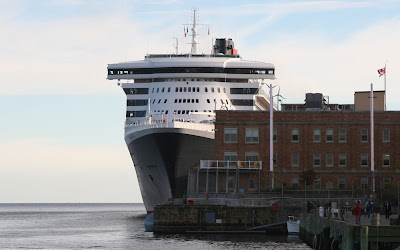 In this 2014 view, the Queen Mary 2 has cast off its lines. The "Queen Mary" bollard was painted red at that time - the same colour as all other bollards in the port, and is visible, bottom centre of the photo.