Note:Some sort of computer glitch prevented the posting of this entry on May 14. It is being published May 15, but relates to activity on May 14.

The Mediterranean Shipping Company's Indus 2 service, which also calls at Mediterranean ports, is apparently a success as the line has assigned a 9000 TEU ship, an increase from the 8200 TEU size we have seen since October. Today (May 14) marks the arrival of the MSC Maria Elena. 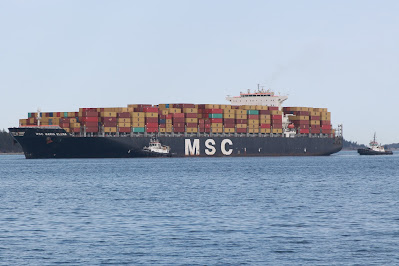 There was an odd arrival at Fairview Cove today (May 14) - a ship carrying containers,  but not sailing for a particular shipping line. Instead the ship is a multi-purpose, heavy lift type, operated the BBC Chartering. The ship is BBC Zarate built in 2007 by Taizhou Sanfu Ship Engineering Co in Taizhou, China. 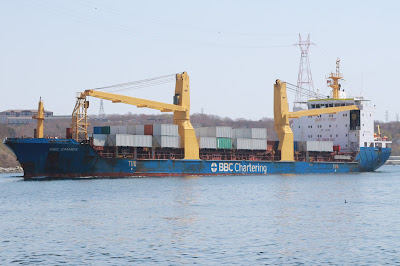 The 9620 gt, 12.834 dwt ship has a pair of 120 tonne capacity cranes that can work in tandem for a 240 tonne lift. The ship's deck cargo consisted of mostly unmarked containers. They appeared to be new, and were painted white, although they are not reefers. They carried LCCU reporting marks. .

Amendment: I misread the reporting mark. In fact it is LCGU which is used by Lotus Container GmbH of Seevetal, Germany. The company buys, sells, and leases containers. Some of the other visible containers including a  "Dong Fang" - appear to be used.. 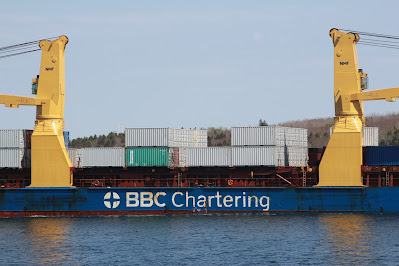 Strangely the ship did not stop for CFIA inspection, even though it was in Thailand  April 5-7. It then called in Singapore April 10, Suez April 26-27 and Algeciras May 4-5.