It was a two ship day for Autoport today (May 6), with one ship sailing and another arriving soon after. 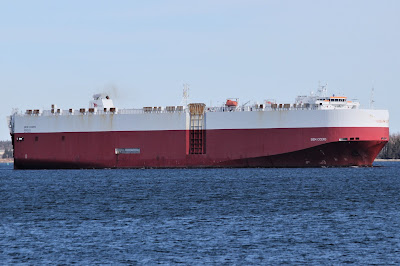 The ship has a "history" with Halifax. In March 2021 it was barred from entering port until two weeks after the last symptoms of COVID-19 had been disappeared from the crew. It idled off Halifax from March 17 to April 6 before docking. Today all was apparently well, and the ship arrived and sailed on time.

While outbound it passed the inbound Aniara, also a ship that has called here many times before. It dates from 2008 when it was delivered by Daewoo Shipbuilding + Marine Engineering Company, Okpo, South Korea. The 71,673 gt, 30,089 dwt ship has a capacity of 7,620 RT43*, and has a 320 tonne capacity stern ramp. 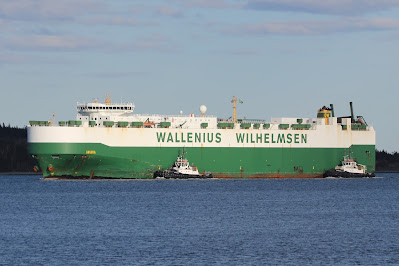 The Aniara is from the Wallenius part of Wallenius Wilhelmsen, but has not yet been repainted in the new colour scheme adopted for the merged fleet.

* RT43 or RT is the standard term used to rate capacity for car carriers. It is based on the model of the first car to be shipped on a dedicated autocarrier - the 1966 Toyota Carolla. The important characteristic was the overall lane space required to accomodate the 4m long x 1.5m wide car. Since then the term has been used by all autocarriers and should be considered relative only, as it may not represent the actual number of cars that can be carried, as some cars will be larger and some smaller.