The photo I posted yesterday of the arrival of the autocarrier Treasure did not do the ship much justice in view of the fog and rain. Today (May 29) however, conditions were pretty much ideal when it sailed for New York, which certainly justified another shot. 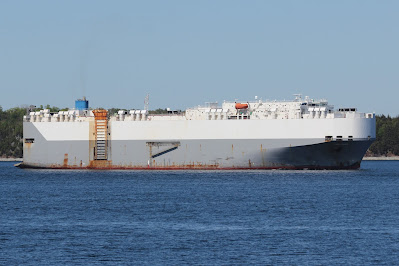 The well worn ship was built in 1999 and is now owned by the Blue Arrow Navigation Ltd and managed by ASM Maritime BV  It is operating on Wallenius-Wilhelmsen's SVC1 transatlantic service, likely as a short term charter.

It was initially named HUAL Treasure. The well known Norwegian shipowner Leif Höegh formed a joint venture with Ugland Rederi in 1970 called Höegh Ugland Auto Liners (HUAL) but in 2000, not long after this ship was delivered, Höegh bought out Ugland's 50%, but did not rename the company until 2005 when it  became simply Höegh Autoliners. The next year the ship was renamed Höegh Treasure in recognition of the change in company name.

Höegh acquired 12 autocarriers from A.P. Møller-Maersk in 2008 and, A.P. Møller Maersk became a 39% shareholder in 2008-2009. The company now operates 33 ships and is styled Höegh Autoliners ASA and is listed on the Oslo stock exchange.

The Hoegh Treasure was sold out of the fleet in 2014 and efficiently renamed with a swipe of paint. It seems to have been operating in the Mediterranean until picking up the Wallenius-Wilhelmsen route in Zeebrugge May 11-13, then the usual ports of Southampton May 13-16 and Bremerhaven May 18-19.

The grey hull with upward slant at the stern was once a familiar sight in Halifax, but Höegh Autoliners no longer call here regularly.

In the "pre-autoliner" days, Leif Höegh operated a fleet of handsome general cargo ships in a Europe/ North America / Asia and return service. Their light grey hulls were quite unique, and immediately recognizeable.

Höegh Elite was built in 1964 by Chantier Dunkerque, Bordeaux, and was sold in 1979. It lasted until 1985 under a string of far east owners.

The company made the transition into containers by awkward conversions. Many of its regular ports had no container facilities, and so the ships still carried general cargo, including heavy lifts. 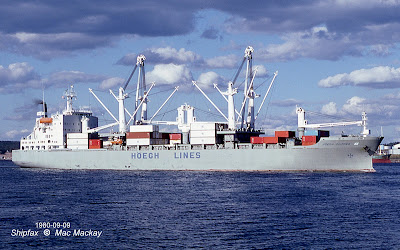 Some of their early autocarriers were also conversions, from large passenger cargo ships, such as Royal Mail Lines' 1959 Harland and Wolff built Amazon which became HUAL Akarita. By building garage decks in the holds and on deck, then moving the bridge forward they "suddenly" had an autocarrier.

The Höegh parent company eventually shifted away from general cargo, and into bulk carriers, before concentrating on auto carriers. They now also operate gas tankers.