The autocarrier Toledo arrived in Halifax Monday, May 16 and after offloading a large consignment of RoRo cargo at Pier 9C, moved this afternoon (Tuesday, May 17) to Autoport to discharge automobiles.

On arrival, the ship proceeded to Bedford Basin where it turned, then came alongside Pier 9C starboard side to. 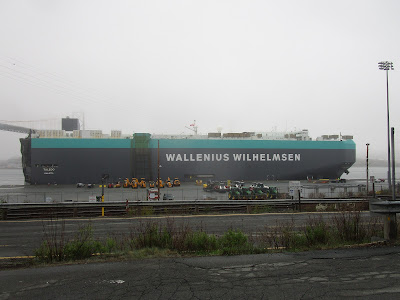 There was still some RoRo cargo left on the pier from the last ships, but there was room for lots more. By late afternoon they had filled many of the gaps.

There was the usual array of construction, forestry, mining and agricultural equipment, plus some shrink wrapped boats, which will be trucked away to destinations far inland.

Thick fog blanketed Halifax this morning, but cleared off by early afternoon when the Toledo got underway for Autoport. 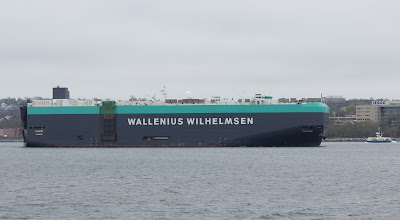 Mitsubishi Heavy Industries Ltd built the ship at the Nagasaki Shipyard and Machinery Works in 2005. It is a 61,482 gt, 21,965 dwt vessel with a capacity of 6354 cars. It has a 237 tonne capacity stern ramp and a sizeable side ramp.

The fog and rain also greeted two cruise ships as they arrived in port today. 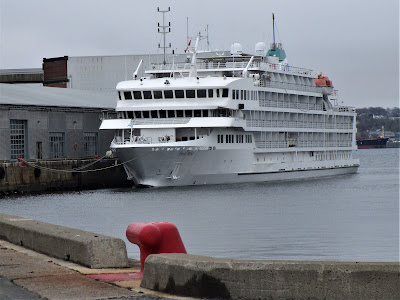 One was the familiar Pearl Mist. Launched by Halifax Shipyard in 2008, it was finally completed elsewhere and entered service in 2014. The 5109 gt ship can carry 210 passengers in 105 double rooms and has a crew of 70.

The other was somewhat larger Zaandam which will be a regular caller this year. 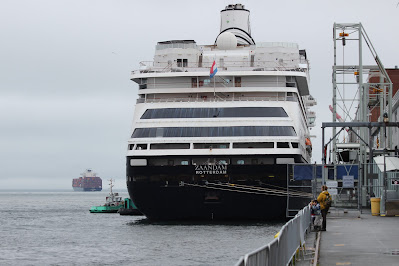 Built by Fincantieri in 2000, it is a 61,396 gt ship for 1432 passengers and 615 crew. It tied up at Pier 22 where it was tended to by Dominion Diving's tug Dominion Rumbler (that's what it says on the stern -  now registered by number only, so the name is unofficial) and a refuse barge.

That is the container ship ZIM Constanza sailing in the background. It will soon be enveloped by offshore fog.

Also sailing today, but earlier in the morning while the fog was still heavy, was the ferry Svanoy (see previous posts, April 12 and May 10). 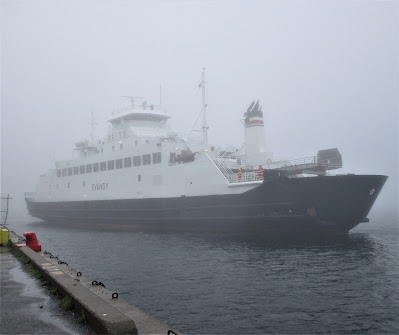 The Svanoy has been chartered for a year (with options to extend) by Quebec Province's ferry operator the La Société des traversiers du Québec (STQ). It arrived in Halifax from Norway in April and after being "Canadianized" is now registered in Canada. On sailing today it gave a destination of Pictou, suggesting it may be hauled out for survey before taking up duties in Quebec. That is not unusual as the ship's condition needs to be well documented before and after the charter.

It is expected to take up service in June, running between St-Joseph-de-la-Rive and Ile-aux-Coudres, about 60 miles downstream from Quebec City. So far there has been no suggestion that the ship will be renamed.