Up Close, and Up Ended

It is always a pleasant surprise when a big ship comes in west of George's Island. The west channel, opposite the seawall of Pier 20-22, is not usually the first choice for ships whether arriving or departing, but is available if the roomier east channel is occupied. The water is actually deeper on the west side, but it is quite narrow and for larger ships, often involves a tethered stern escort tug. 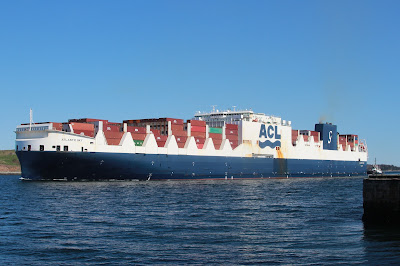 Today's (May 3) calm weather was perhaps also a factor as Atlantic Sky made its way inbound with the tug Atlantic Bear in the escort role. The pair filled a 28mm wide angle lens as it cleared the corner of Pier 20.

The tug accompanied the ship through the Narrows as required. However once in Bedford Basin, the ship was able to berth without tug assistance. I am always amazed when these huge ships handle so well. The ship's tonnages are 100,430 gt, 55,828 dwt and it measures 296 m length x 37.6m breadth.

Not long after the above photo was the arrival of the Maersk Penang on the joint CAE service operated by Maersk and CMA CGM. The ships usually call in Halifax on Saturdays en route from Montreal to Bremerhavcn, Rotterdam and Antwerp (15 days). If the schedule is disrupted due to weather or ice, the ships often skip the Halifax call and sail directly from Montreal to Bremerhaven. However there must have been sufficient cargo inducement in Halifax on this trip despite a late arrival on a Tuesday. 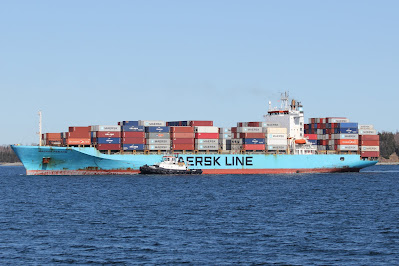 It was also notable that the ship was piled high aft with empty containers. Two major issues facing shipping lines these days are therefore summarized here: schedule reliability and equipment availability. The huge shortage of containers in Asia can only be allieviated by ships loading as many empties as possible (even though there is no revenue from carrying them). 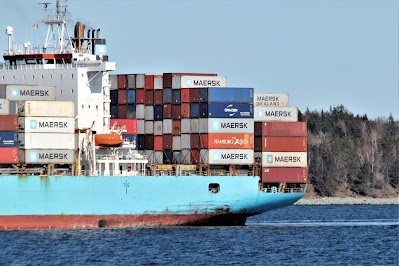 Maersk Penang has a capacity of 2890 TEU with 400 reefer plugs. A rough count would give 140 to 150 or so forty foot empties perched on the afterdeck. Many appear to be reefers, but are obviously not using the reefer plugs to power them.

No one knows how many containers there are in the world, since there is no central registry or record. Estimates vary from 17 million to 55 million. (Others say bewteen 40 million and 72 million). So called 'international' or sea-going boxes are built to a different specification from land-bound intermodal types, so are not interchangeable. Most deep sea ships cannot carry the 53 footers favoured by North American truckers and shippers and can only carry 20 foot and 40 foot "sea cans". However these do vary in height at 8 ft, 8.5 ft and 9.5 ft, which explains the variation in stack heights in the photo.