When PSA took over the lease on the Fairview Cove container terminal recently it was expected that certain rationalizations would occur. 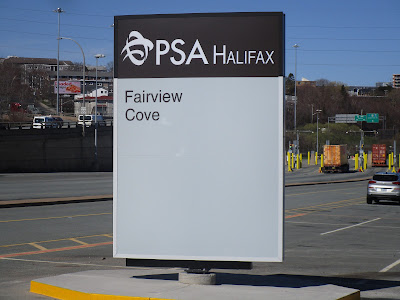 Some Lines that had been using the Fairview Cove terminal are expected to move to the PSA Halifax / South End, Atlantic Hub terminal and vice versa. There are a number of reasons for this, including faster cargo handling for large ships with more and better cranes at the South End, and reduction of truck traffic through downtown. Smaller ships could be equally well handled at Fairview, and would not be concerned with bridge clearance issues. There are virtually no restrictions at the South End, and even ships larger then the current record holder 16,000 TEU size can be accommodated.. 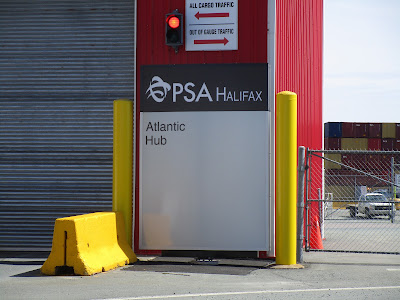 Yesterday's [see May 12 ] caller at Fairview Cove, the MSC Sao Paulo was the first of those changes. En route to Montreal, it was in port for only a short time, and offloaded a few containers to reduce draft. It could be handled just as effectively at Fairview since it did not need extra large cranes, and it was small enough to transit the Narrows with ease. These top off and decant visits by MSC are now expected to be served by Fairview.

Today, May 13,  the "other shoe" dropped as you might say, as THE Alliance's MOL Charisma on the EC5 service, docked at The Atlantic Hub / South End terminal. Both THEA services, EC 5 and AL5 have until now used Fairview Cove. (Occasional shifts were accommodated.)

MOL ships are noted for their blue hulls, and the MOL Charisma  is no exception - in fact it appears to be in pristine condition, hinting at a recent shipyard visit. 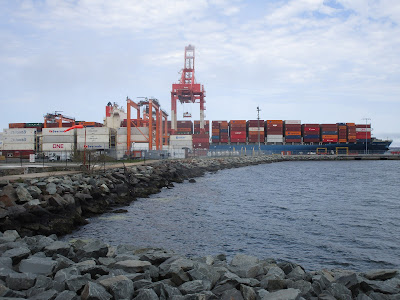 Built in 2007 by Mitsubishi Heavy Inustries, Nagasaki, it is an 86,692 gt, 90,390 dwt vessel with a capacity of 9060 TEU including 630 reefers. It would have been nearly the maximum size that could access Fairview Cove, but can be handled with ease at the Hub. (The ship did anchor until mid-afternoon, but this was likely for CFIA invasive species inspection, rather than this morning's thick fog.) Launched as MOL Charisma it was immediately renamed APL France for a charter until 2010 when it reverted to its original and present name. Now on the EC5 route, its last port was Colombo, Sri Lanka.

While the MOL Charisma was docking the NYK Meteor arrived from Antwerp on the AL5 service and headed for Fairview Cove. 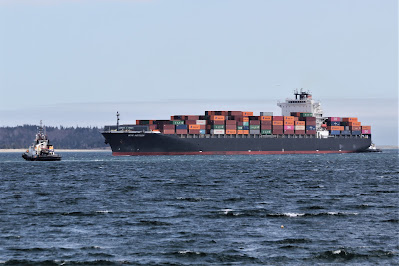 Another of the twelve ship Daedalus class, it was built in 2007 by Hyundai, Ulsan, and at 55,534 gt, 65,935 dwt, has a capacity of 4922 TEU. The benefit of two terminals under common management was immediately obvious as this ship would have had to wait at anchor had the MOL Charisma been alongside Fairview Cove.

It may also be that strict assignment to one terminal or the other will be eliminated, and ships will be handled at the first available berth. This may cause headaches for railroads, trucks and cargo planners in the terminals, as considerable advance notice of berthing is needed, particularly for exports.

Both terminals are owned by the Halifax Port Autority, a federal crown corporation, and are operated under lease by PSA. PSA owns the cargo handling equipment within the terminals, and some supplier/contractors, such as reefer maintainers, also have facilities within the terminals. 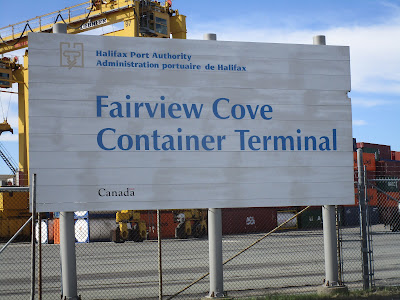 The next step in the rationalization process will be to move some of the smaller lines from the South End Hub to Fairview. Oceanex, Tropical and Maersk /CMA CGM Canada Atlantic Express are all expected to make the move at some point. Whether or not these are "permanent" remains to be seen. The South End is about to embark on another expansion of ground space and rail lines. That is a multi-year process however, during which there may be disruptions. When it is completed in five years or so the shipping "landscape" may have changed considerably.

Long range planning for the Port is underway, and several major issues will be under consideration. Rising sea levels and autonomous vehicles (including trains) are among the big elephants in the room, but there are many others including a new bridge (or two) and further port expansion, such as a third terminal (in Dartmouth). Enough parentheses already.

The advantage of crown corporations is that they can see beyond the five year lifespan of current governments. So the pressure is on this particular corporation to stay ahead.