The Mediterranean Shipping Company has 664 ships (with a capacity of 4,351,960 TEU) according to recent reports. It is therefore not surprising that some ships have similar names. One ship that has called in Halifax to and from Montreal is MSC Rochelle, but today (May 4) it was the MSC Rachele arriving on the Indus 2 service. This is its second call on that route - the first was December 12, 2021. 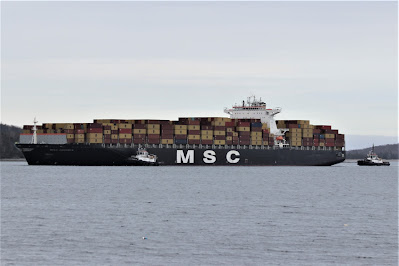 The tug Atlantic Oak has made up forward and Atlantic Bear has a stern line as the ship nears the southend terminal in a light mist.

The ship sailed from Mumbai, India April 9. It transitted the Suez Canal April 15-16 and called at Barcelona April 22, Valencia April 23-24 and Sines April 26-27. When the service started in September 2021 it was calling in Gioia Tauro, Italy and not in Spain. US ports have also changed and are now listed as Boston, Philadelphia (added lat month), and Baltimore (Norfolk and Miami were dropped). The ships then call in Freeport before returning to Gioa Tauro, Mundra and Nava Sheeva (Mumbai area).