The Container / RoRo Grande Marocco arrived at Autoport May 14 from Bremerhaven and remained alongside today, Sunday May 15 and is due to sail Monday. It is an unusual ship for Autoport, as most ships that call there are Pure Car and Truck Carriers (PCTCs). 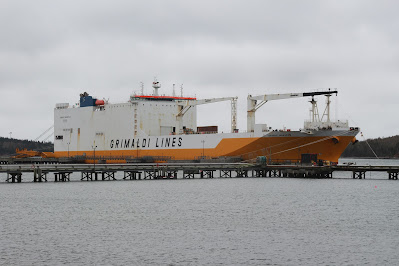 Grimaldi Lines operates about 17 PCTCs and about two dozen ConRos similar to this one, including five of this class. They generally operate in African trades where they can handle a multitude of cargo types, and carry their own cranes for cargo work. Some Grimaldi ships can also carry a limited number of passengers, although they have suspended that feature for a time. (Grimaldi also owns Atlantic Container Line and their five huge CoRos).

Built in 2010 by Hyundai Mipo, Ulsan, Grande Marocco is a 47,636 gt, 75,725 dwt ship with a container capacity of 800 TEU and a car/van capacity of 2,000 (according to Grimaldi. Other sources quote different numbers). Some cars can be carried on the open upper decks above the hold and on the superstructure. There were some front end loaders and a container in the open on the main deck. The cargo however is new German autos, carried under cover on the ship's four full length and eight part length decks. The ship has a 250 tonne capacity stern ramp, so can also handle high and heavy loads.

Since the ship did not appear on any advance schedules for the port, it may be a late substitute. There might well be a back log if the loss of the Felicity Ace in February is taken into account. (The ship sank March 1 as a result of the uncontrollable fire .)