After several days of interesting container ships, today, May 6, it is time for something completely different. 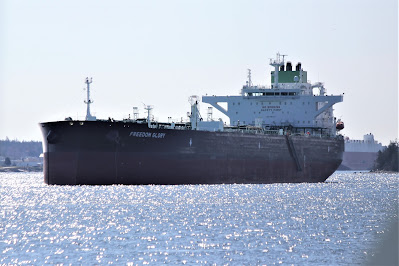 There is no facility in Halifax for crude oil tankers, so the rare ones we do see are here only for repairs or inpsection, and such is the case for the Freedom Glory. It has apparently been in Asian waters in the last six months, which is recently enough to warrant a check for invasive moth species by the Canadian Food Inspection Agency (CFIA). I can see on the internet that the ship was in Brisbane February 16 to 18, Ras Tanura March 24 to 25, Suez Canal April 6 and Le Havre April 17 to 18. Presumably it unloaded its crude oil cargo in the latter port, and made the Atlantic crossing in ballast. Its destination was Whiffen Head, NL, but was diverted here for the inspection.

Whiffen Head is the location of crude oil storage facilities for Newfoundland crude. Shuttle tankers transfer the oil from offshore facilities to storage tanks and it is then sent out, generally to US refineries, as needed.

Freedom Glory was built in 2020 by Samsung, Koje (or Geoje), South Korea and is listed at 62,416 gt, 114,122 dwt. It is considered to be an "Aframax" size ship (115,000 dwt maximum) and is capable of transiting the Panama Canal. The ship is operated by Sinokor Merchant Marine Co Ltd, a South Korean company with a fleet of 146 ships, of which 52 are tankers. The rest are container ships and drybulk. 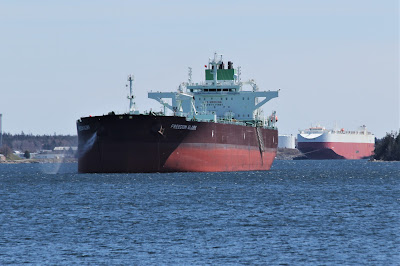 The auto carrier Siem Cicero at Autoport looms in the background as Freedom Glory prepares to weigh anchor.