Return of the Ferbec and the Algo grain ship

A regular "spring" event in the port of Halifax is the return of ships that have been flagged out for overseas work during the winter, or have arrived from the Great Lakes after the winter shutdown. Today there are ships in port for both reasons.

At noon time it was the Canada Steamship Lines bulk carrier Ferbec flying the Barbados flag. I have related the story of the ship, and a previous vessel of the same name, in some detail here  . Since arriving in Canada in 2017 the ship has avoided winter conditions by reflagging and trading in foreign waters, with an international crew. Each spring it returns, usually to Halifax, to be reflagged and "re-crewed" with a Canadian crew, before resuming its usual trade. During the past winter it worked for a time in Columbia and Brazil, but in late March it went to Tuzla, Turkey for refit. (At 20 years of age, there was likely a major survey and along list of renewals.) That long list of work may explain why the ship is nearly two months later than usual arriving back in Canada. 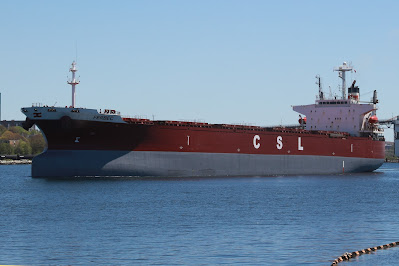 Aside from the splendid new paint job, there was also a noticeable diference. The ship's four cargo cranes (and grab buckets) have been removed and the Supramax size ship is now a gearless bulk carrier.

The ship is dedicated to operate between Havre-St-Pierre and Sorel-Tracy, QC carrying ilmenite ore for Rio Tinto Fer et Titaine (Rio Tinto Iron and Titanium) and does not require the cranes to load or unload. A high capacity crane at Tracy is used for unloading, and the ship's cranes were actually in the way, and had to be swung out each time the ship arrived in port. 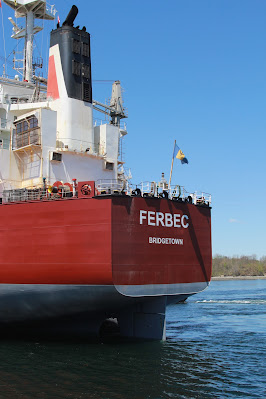 In a few days the crew will have the port of registry repainted to Sorel, the flag changed to the maple leaf, and the ship will be on its way.

The ship's name (pronounced Fair-Beck) is an amalgam of Fer (Iron) and Bec (Québec) and derives from the first owners of the operation, Québec Fer et Titaine, also known as QIT. It is now known as RTFT and the company has a website on the operation. Use this link: RTFT

Another sure sign of spring is the arrival of the first grain cargo from the Lakehead. Algoma Mariner arrived late last night May 24 and began unloading its cargo at Pier 26. 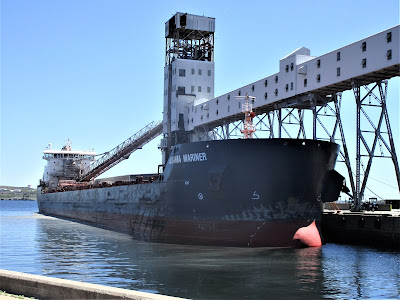 The ship sailed from Thunder Bay May 17and made its way down through the St.Lawrence Seaway May 21. A familiar sight in Halifax since it was built in China in 2011, the ship usually picks up a load of gypsum as backhaul after unloading its grain.

The ship's arrival is a little later than usual, but the local grain needs are also met by rail, as there are often rail cars at the P+H flour mill.

The ship can unload at a rate of over 5,000 tonnes per hour, but the port's grain handling machinery probably can't convey the grain that quiickly. Even so, eight hours of unloading does show a significant change in the ship's draft. 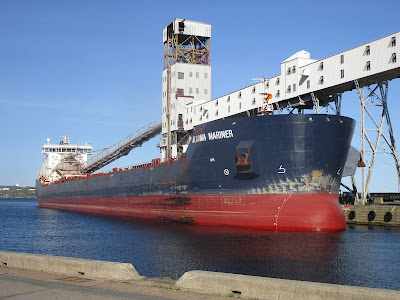