Back in November I showed photos of two little wooden coasters operated by Co-opérative de Transport Maritime et Aérien of the Magdalen Islands.  http://shipfax.blogspot.ca/2014/11/from-archives-back-by-popular-demand.html
Maid of Clare was their first vessel, bought in 1945, and Flojald II was bought in 1956.
They also operated George R. Bradford, built as a 3 masted schooner in 1895 in Essex, MA and rebuilt in 1945 in Dayspring, NS as a motor coaster. C.T.M.A. bought vessel from F.W Leslie in 1945, and sold it in 1951.
Also in 1945 they bought Lavernière and converted it from the RCN Fairmile B class motor launch Q-113, built in 1944 by of J.J.Taylor of Toronto.It became a 126 grt cargo vessel, but was lost July 29, 1949 when it collided with the Quebec North Shore Paper Co's Colabee off White Point, NS, 9 mi south of Canso. In a sinking condition and a hazard to navigation, its master ordered it fired before abandoning it.

In 1946, C.T.M.A.ordered a pair of coasters built by by Chantier Maritime St-Laurent in St-Laurent, Ile d'Orléans. They generally operated in the Gulf and River to Montreal, carrying fish and general cargo, and often came to Halifax in winter. Havre Aubert and Havre aux Maisons were twins, of 197 grt. Measuring 109 ft loa, they were a rather sleek 24.4 ft wide and 9.4 ft. deep. Powered by 320 bhp Fairbanks Morse engines, they had short after decks and pointed sterns. They also carried distinctive steel tripod masts supporting cargo derricks for each hold.I believe the ships were 'tween deckers, at least forward. They had most of the crew accommodation forward above deck and unusual for cargo ships, a monkey's island above the wheelhouse, similar to that of the RCMP St.Roch.
Unlike most wooden vessels built on the St.Lawrence at the time, they were round bottomed and built to go to sea. 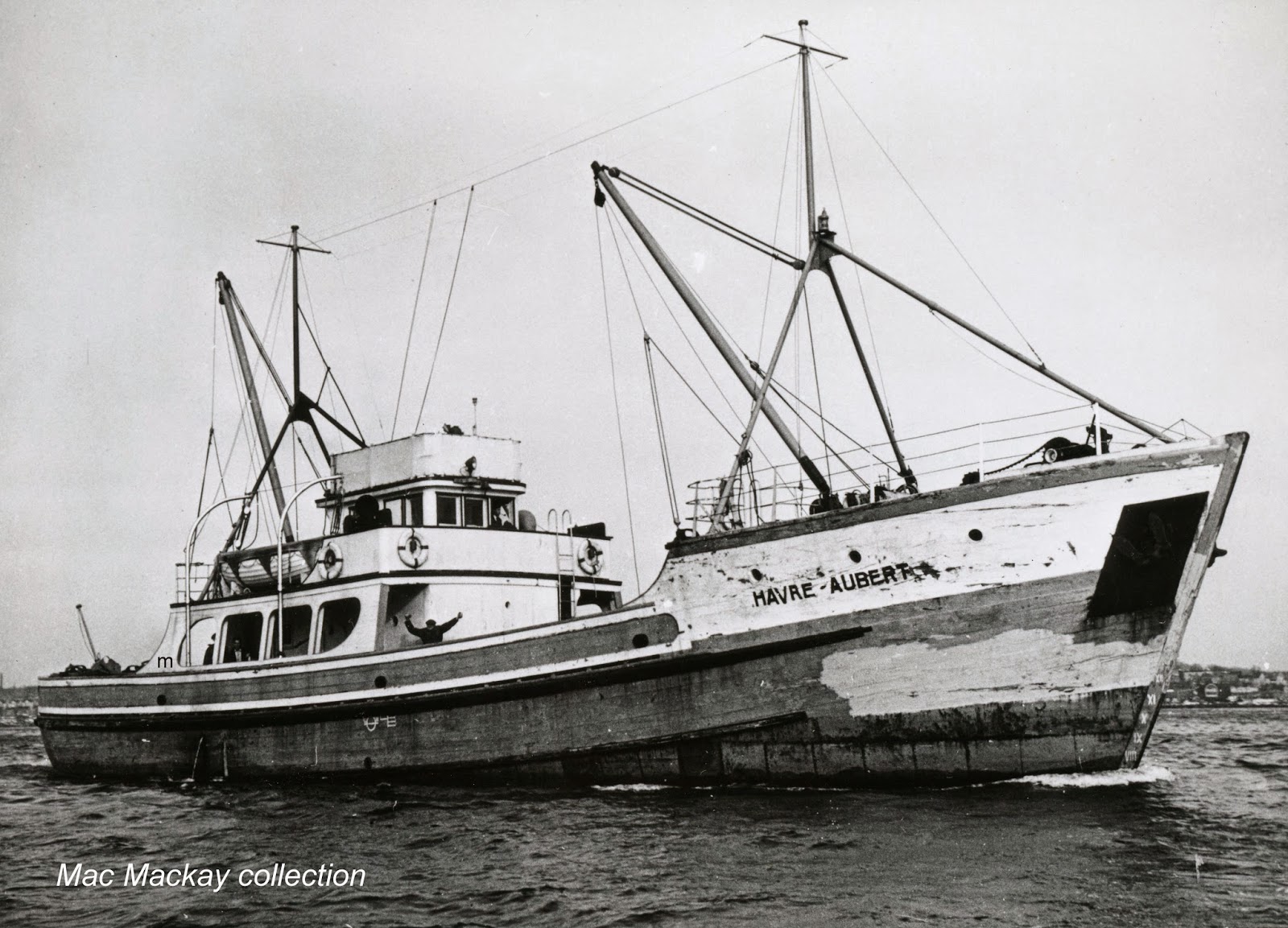 Pictured in Halifax in the 1950s, Havre Aubert is showing the effects of winter navigation.

Havre Aubert was reported drifting 20 mi North of Deadman's Island November 19, 1950  and was escorted into Grindstone by RCMP McBrien. In August 1956 it loaded prefab lumber camps in New Glasgow, NS for the Quebec North Shore Pulp and Paper Co at Godbout. It was then sold about 1959 to Navigation Chicoutimi-Montreal Inc.It burned out in Gaspé July 2, 1963 and was declared a constructive total loss. There is a report that it was converted to a restaurant in Chicoutimi.


Havre aux Maisons was sold to J.T.Swyers of Newfoundland in 1951. It suffered a broken prop shaft in May 2, 1953 somewhere off Newfoundland and was towed 68 miles to port. A court dismissed a salvage claim of $15,000 by the vessel Curling since the incident occurred in calm seas, and amounted to no more that a tow to port.
The ship foundered 26 mi WSW of Cape Anguille July 20, 1959.

The hard driven little wooden ships were then replaced with steel vessels. The first one acquired was Brion, built in 1946 by St.Lawrence Metal+Marine Works of Quebec City as Ottawa Maystar. It was one of a large class of "China coasters" intended for far east service, but completed after the end of hostilities. Measuring 521 grt, 535 dwt, it was 151ft 1 in loa and had an 8 cyl Enterprise engine and was a 'tween decker.

It was turned over to the War Assets Disposal Corp and sold to Maystar Shipping of  Montreal. Renamed May Star it operated under Honduran flag until 1954,  then the Dutch flag as Pia Geerto until 1954, May to 1955, Westerhorn to 1957, and Triad to 1959 (always for the same Dutch owner, who apparently liked to change the nae of his ship.) It was restricted to trading in the Baltic, Mediterranean, European coasting including Great Britain and Ireland, but was only allowed to trade north of 60 degrees North latitude in summer.
C.T.M.A. bought the ship in 1959, renamed it Brion and replaced its two derricks with a midships mounted crane. The ship had some limited refrigerated cargo space. 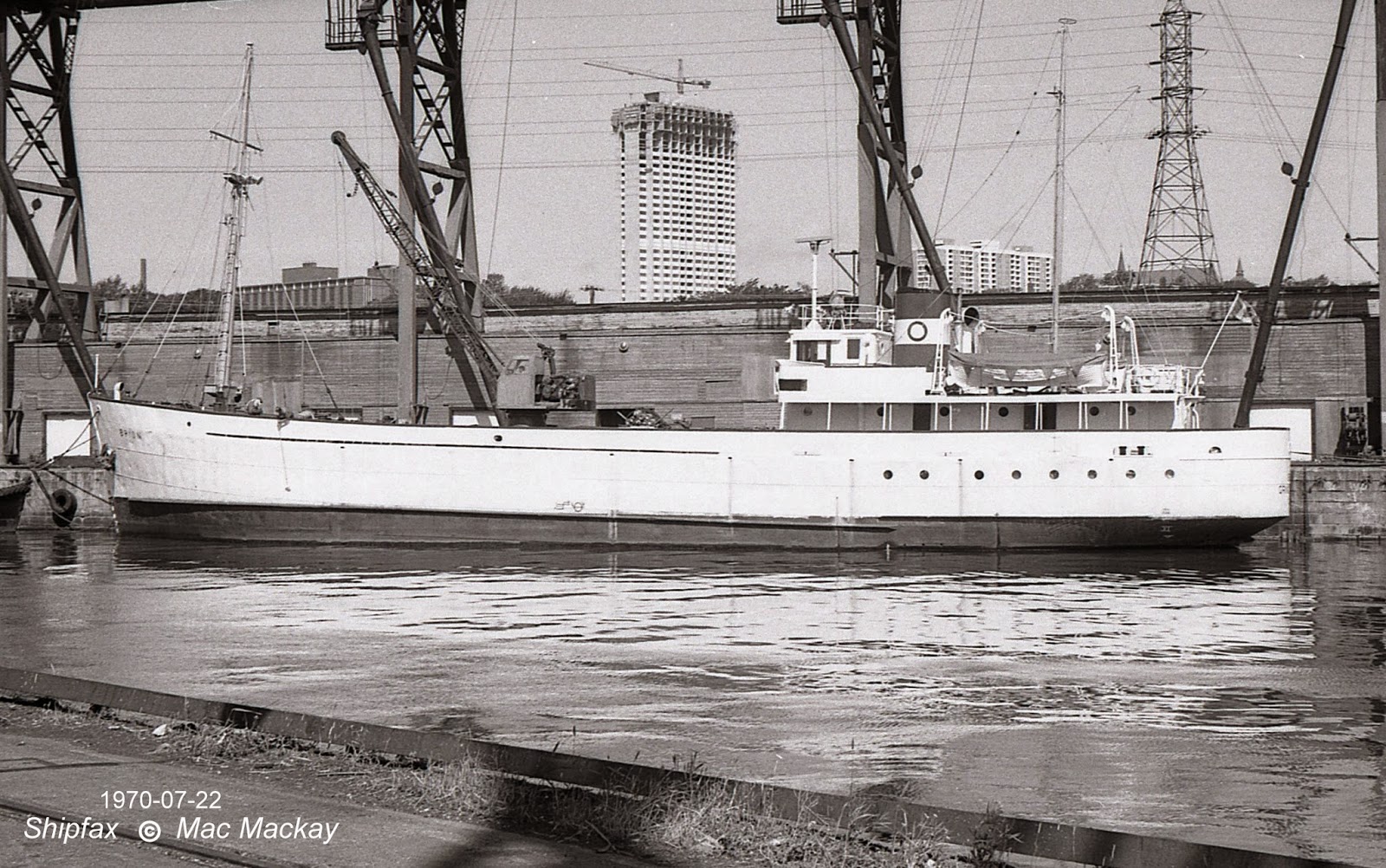 It ran on the St.Lawrence in summer and wintered in Halifax, but following the loss of the of Maid of Clare began operating from Halifax in 1969 from April to October. It did not trade in winter and avoided ice.
In 1976 it was sold to Donald Thibualt of Baie-Trinté, QC, but on August 4 of that year ran aground at Kegashka and was a total loss.

In 1962 C.T.M.A bought another ship, and renamed it Madeleine (i). It had been built in 1950 by Canadian Vickers Ltd in Montreal as the last of five cargo ships with limited reefer capacity, built for a feeder service on the Orinoco River. The Trujillo measured 539 grt, 682 dwt and was 183ft 6 in loa. It had a 6 cyl Nordberg engine and a speed of 11 knots. The ship arrived in Quebec City and was in Bassin Louise on Labour Day weekend 1962, with a sister vessel Ste-Foy ex Aragua ex Bolivar.
(A third sister, Carabobo returned to Canada as O.K.Service XI, also in 1962.)
The ship was a 'tweendecker, with a midships mast working 1-15 ton and 4-5 ton derricks. It had a 1240 cu.ft. refrigerated cargo space in a deck house forward.

It entered service in 1963 as Madeleine running from Montreal and Quebec City or PEI and Nova Scotia to Cap-aux-Meules (which was known as Grindstone in those days) and laying up in Pictou for the winter. 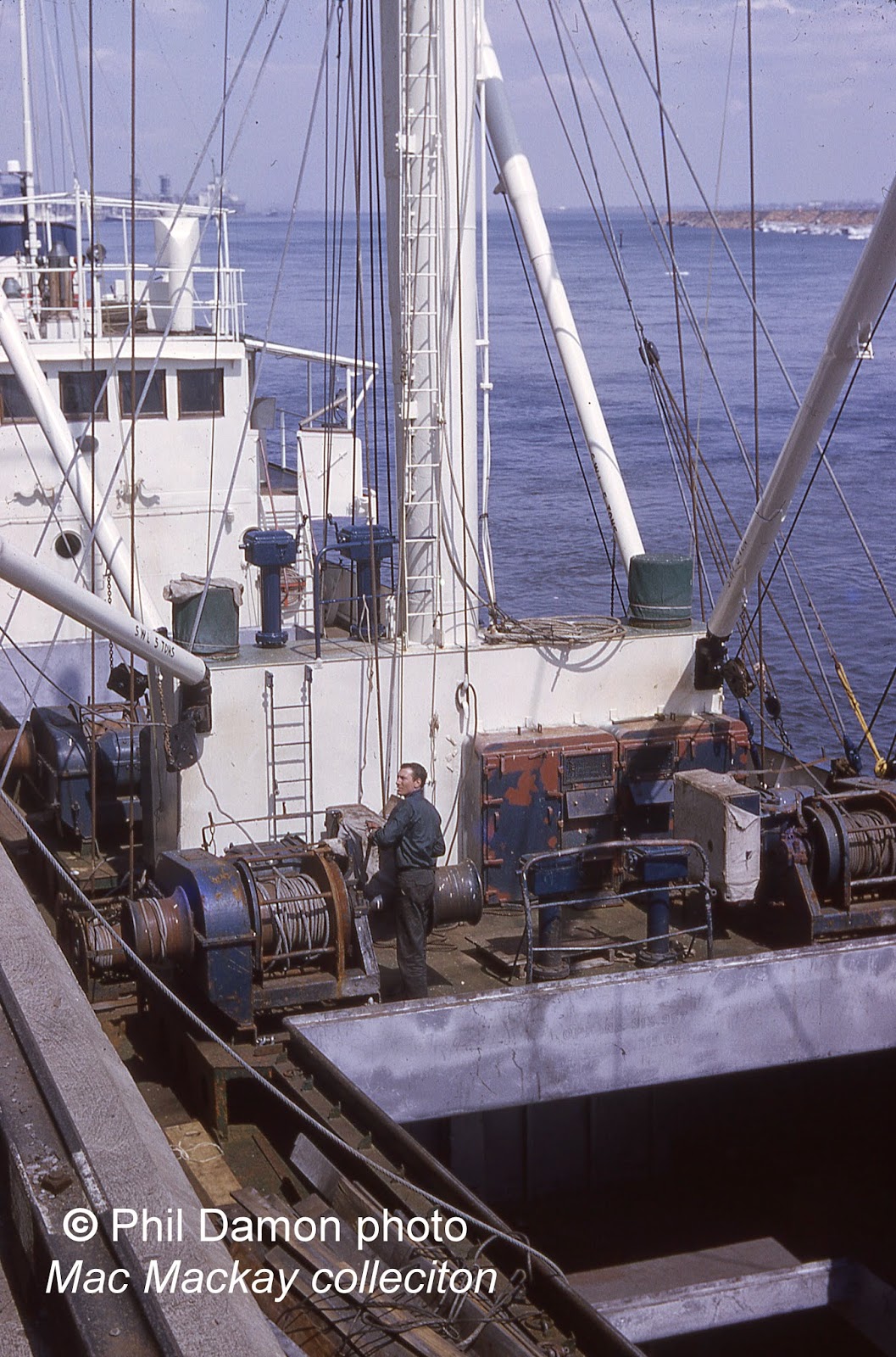 It also did some charter work, recording a Chimo-Clarke northern supply trip in 1970.

Lloyds reported her laid up with surveys overdue in April 1971. A newspaper photo shows her on the cradle at Pictou in February 1972, so it is possible that she operated that year but in March 1973 a scrapper bought the ship and broke it up at Pictou.
A wooden lifeboat from the ship has survived however, and graces the main foyer of the Maritime Museum of the Atlantic in Halifax.

C.T.M.A.'s next acquisition was from abroad. The short sea trader Koldinghus was built in 1959 by Aarhus Flydedok og Maskinkompagni A/S  in Aarhus, Denmark. The 760 grt, 1015 dwt ship was 253 ft 9 in loa and powered by a 6 cyl 1890 bhp Helsingor for a speed of 13.5 kn. It carried two 3 tonne electric cranes serving its two holds. It was a 'tween decker with some refrigerated cargo space. It also carried deck cargo such as cars and containers and also had passenger accommodation for twelve persons.
Purchased in 1969 from  Det Forenede Dampskibs-Selskab A/S, it went to work at first as C.T.M.A.
It was not until 1974, when the previous ship of the name was sold, that it was renamed Madeleine.Under Canadian flag its grt was altered to 730.

The smart looking ship served the St.Lawrence route exclusively, and although it was a Baltic ship, it did not have a Lloyd's ice class, but may have run in winter.

It was laid up at Cap-aux-Meules in 1987 and its Canadian register closed February 2, 1988.
Renamed St. Marc it was seen in the Miami River under arrest. From photos it appears that its cranes had been relocated from midships to forward and aft of the hatches.[addendum: Since posting this I have learned that the cranes were in fact mobile, and moved on platforms to serve the hatches.]
Then in 1992 it was renamed Recovery for Cayman Islands Transport Ltd, flagged in Belize. As with so many ships in the Caribbean it seems to have vanished from view and Lloyds eventually gave up on it, deleting it January 6, 2012 with the note "existence in doubt".


After this era C.T.M.A., which had built up a large tricking business, needed RoRo capability to carry general freight and refrigerated goods, and so got out of the general cargo ship business, and concentrated on multi-purpose ships that could carry trucks, cars and passengers.