There have been many ships with Halifax in their names - not all of them named for Halifax, Nova Scotia, but that still leaves a large number that have commemorated the city and the port in this way.

This will be an occasional feature on ships named Halifax. It was inspired by a posting on the Boatnerd web site about the limits for trading of lakers. Due to their great length lakers were confined to the Great Lakes before the construction of the St.Lawrence Seaway in 1959. Once the Seaway opened, these ships were able to reach the Gulf of St.Lawrence and the open ocean.  The major domestic inbound cargo through the Seaway to the Lakes was iron ore, and the chief loading ports for that commodity were Port Cartier and Sept-Iles, and thus the eastern limit set for lakers was 66 degrees West  longitude.
Due to their shallow draft and general construction, most lakers were not structurally sound enough to go to sea. Some received extra reinforcement to allow then to travel farther down the north shore of the Gulf to Havre-St-Pierre, QC to load ore, and to Sydney , NS to load coal.

However there was one traditional laker that was rebuilt to extend its range to Atlantic coastal waters, including Halifax.
Built as the Frankcliffe Hall for Hall Corporation of Canada, it was delivered in 1963 by Davie Shipbuilding in Lauzon, QC. The maximum dimensions permitted by the St. Lawrence Seaway at the time was nominally 730'-0" long and 75'-0" wide. At 730'-2" loa Frankcliffe Hall claimed the title as  longest ship in the laker flotilla. Its gross tonnage was 17,350.
It had the traditional laker appearance with its wheelhouse and officer accommodation forward, and engines and crew accommodation aft. It was powered by two John Inglis Pametrada system steam turbines of 9,000 bhp geared to a single shaft with controllable pitch prop for a speed of 17 knots.

In 1980 the ship went to the Port Arthur Shipbuilding Co where it was converted to a self-unloader and its deck was built up to increase freeboard.  With other changes, including some ice strengthening, the ship was then certified to travel into the Atlantic, with seasonal restrictions, as far south as Saint John, NB and Penobscot Bay, Maine and Canada Bay, NL via the Strait of Belle Isle. This included Halifax where it brought in corn and loaded gypsum as a return cargo. 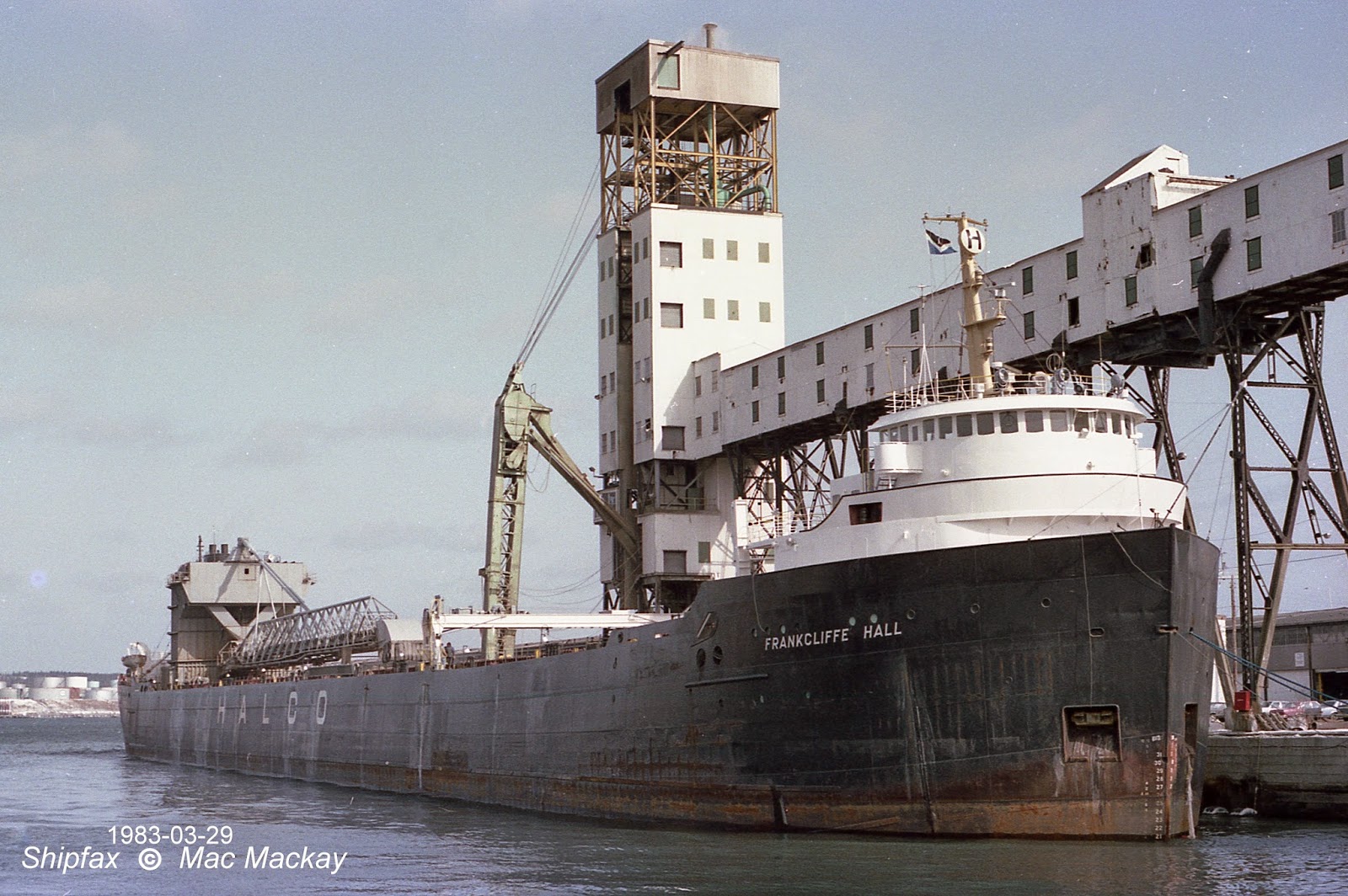 Despite being a self-unloader, at first the ship had to be unloaded using Halifax's grain leg, until a hopper could be built to allow the ship to use its own system. 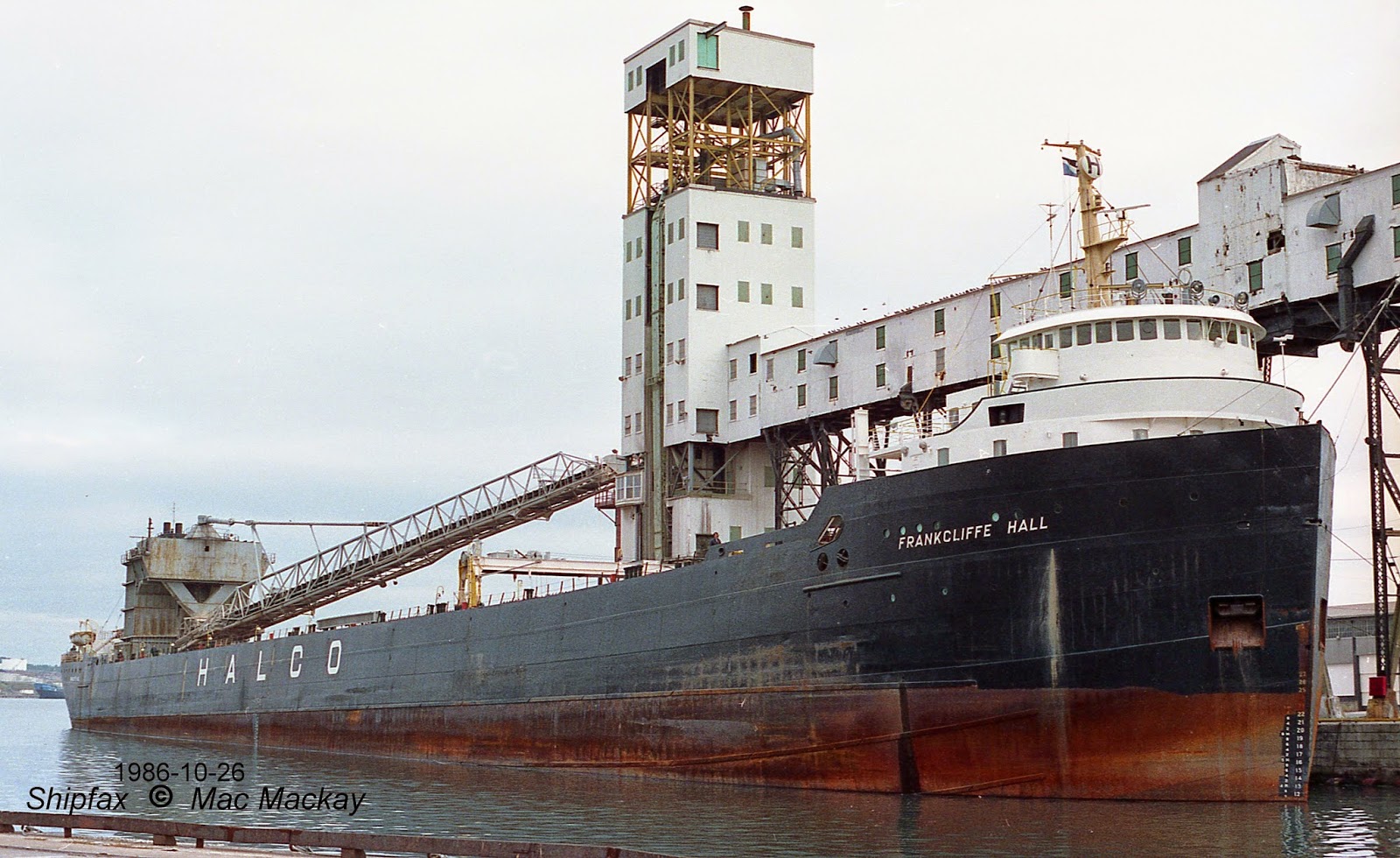 Unloading went much faster when the ship could use its own conveyor system and boom.


In 1987 Canada Steamship Lines chartered the ship for a year and at the end of the shipping season  purchased it when Hall sold off its fleet. CSL renamed the ship Halifax and continued to fulfill a contract to deliver corn to Halifax. The ship became a familiar sight here, wintering over in 1990-91. During the winter of 1991-1992 it had extensive bottom replacement work done at Portship, Thunder Bay, ON to extend its life.

As Halifax,the ship makes its way past George's Island heading to National Gypsum to load its back haul cargo the the Great Lakes. CSL self-unloaders were traditionally painted black because they often carried dirty cargoes such as coal. 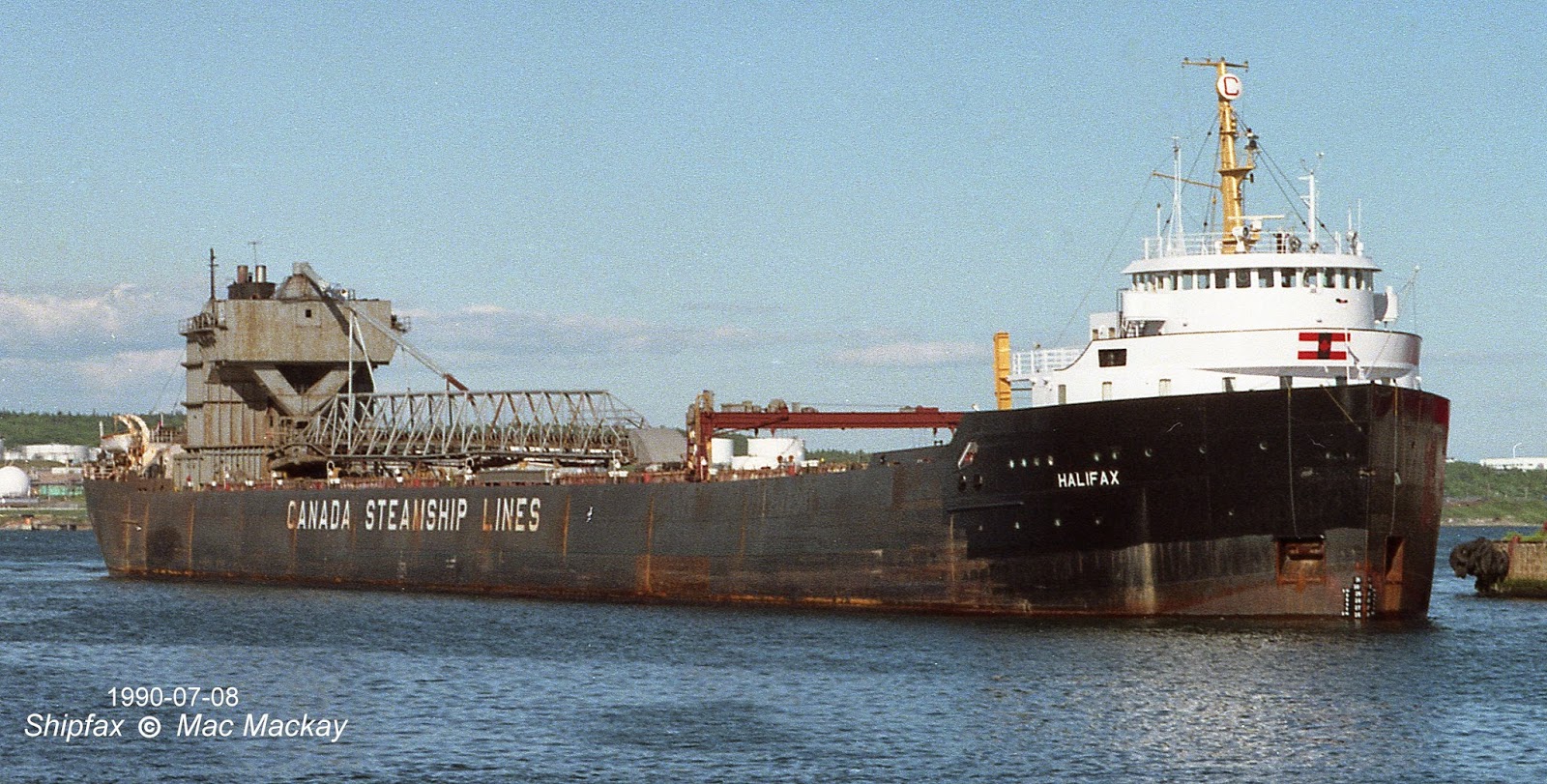 Using its bow thruster the ship makes its way in to pier 26. The crew has been busty painting, and have prime painted the "iron deck hand" the traveling gantry that lifts the ship's hatches.

Even so the ship only ventured out in to the Atlantic in good weather, and often had to lay over in Sydney or the Strait of Canso to await favorable conditions for the run down the coast to Halifax or to Saint John with salt. It may also have visited Belfast or Rockland, Maine with salt. In 1993 it made 7 trips to Halifax but in 1994 it made only one trip, May 8-10 and that was its last visit. After that it was restricted to service no farther east than Belledune, NB.

In its later years the ship was repainted red, the usual colours of CSL ships. In this view the ship's modified funnel  shows. It was extended to clear the unloading tower after the conversion.

In December 2008 the ship laid up in Montreal for the last time, but it was three years later that it was sold to breakers. It left Montreal May 25, 2011 in tow of the tug Sirocco and arrived in Aliaga, Turkey June 22, 2011.