In this day and age a ship that lasts thirty years can claim a significant achievement. On February 8 CCGS Earl Grey will have reached its twenty-ninth birthday, leading into an eventful thirtieth year. 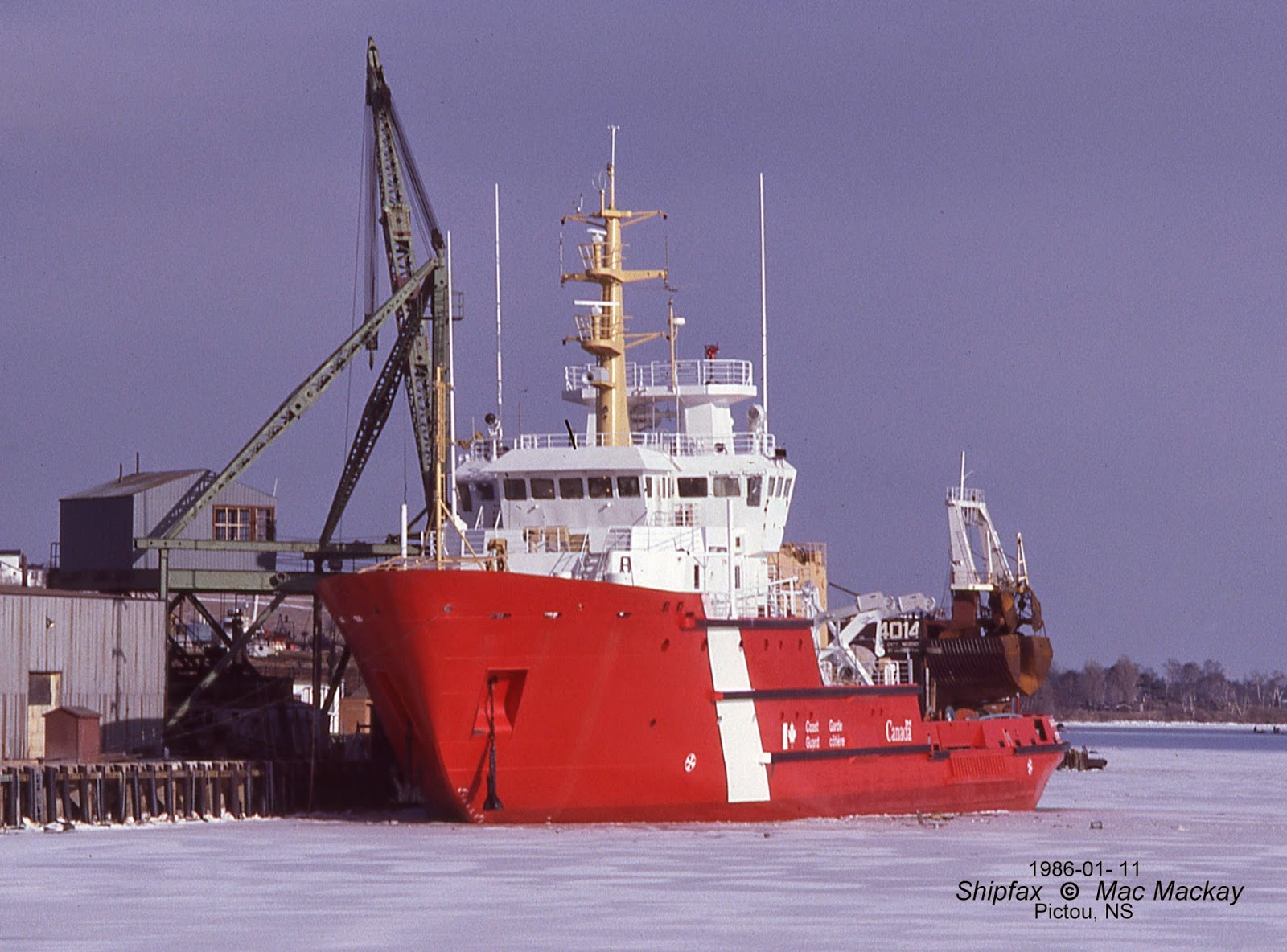 In January 1986, appropriately surrounded by ice, Earl Grey was fitting out at the Pictou Industries shipyard.

It was on February 8, 1986 at Pictou, NS that the ship was christened by Mrs Laura MacKay, mother of the then MP for Pictou, Elmer MacKay, and grandmother of future MP for the same riding, Pictou-Antigonish-Guysborough, Peter MacKay (current Minister of Justice and Attorney General). The ship was built by Pictou Industries Ltd, successors to Ferguson Industries Ltd, and the ceremony took place after the ship was in the water and well on its way to being completed. 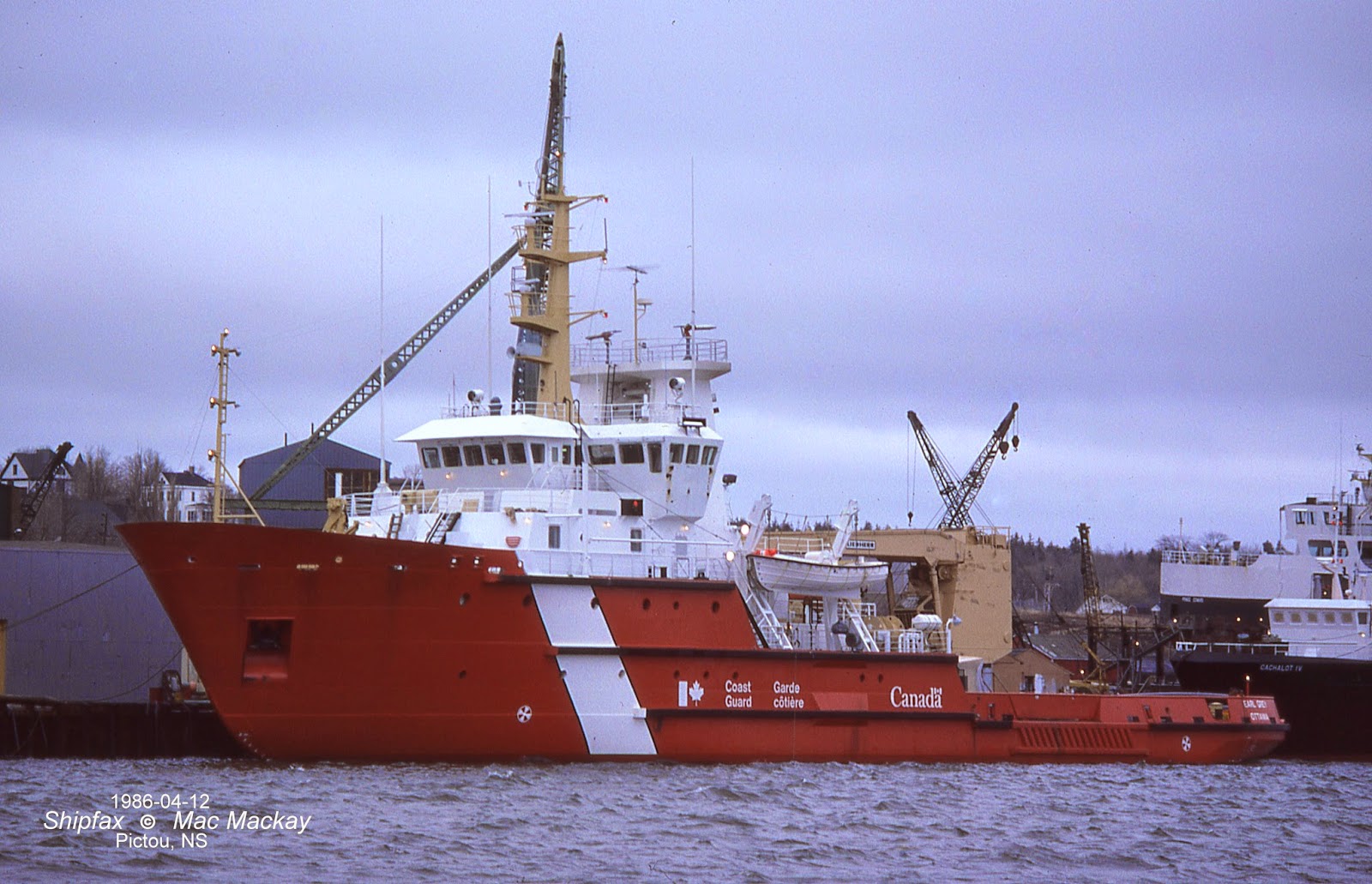 By March, with the ice out of the harbour, the ship was nearly complete.

Instead of engines aft and a well deck forward with a derrick for handling buoys, the ship was built on supply boat lines, with engine nearly amidships, and a large crane mounted on its starboard quarter. 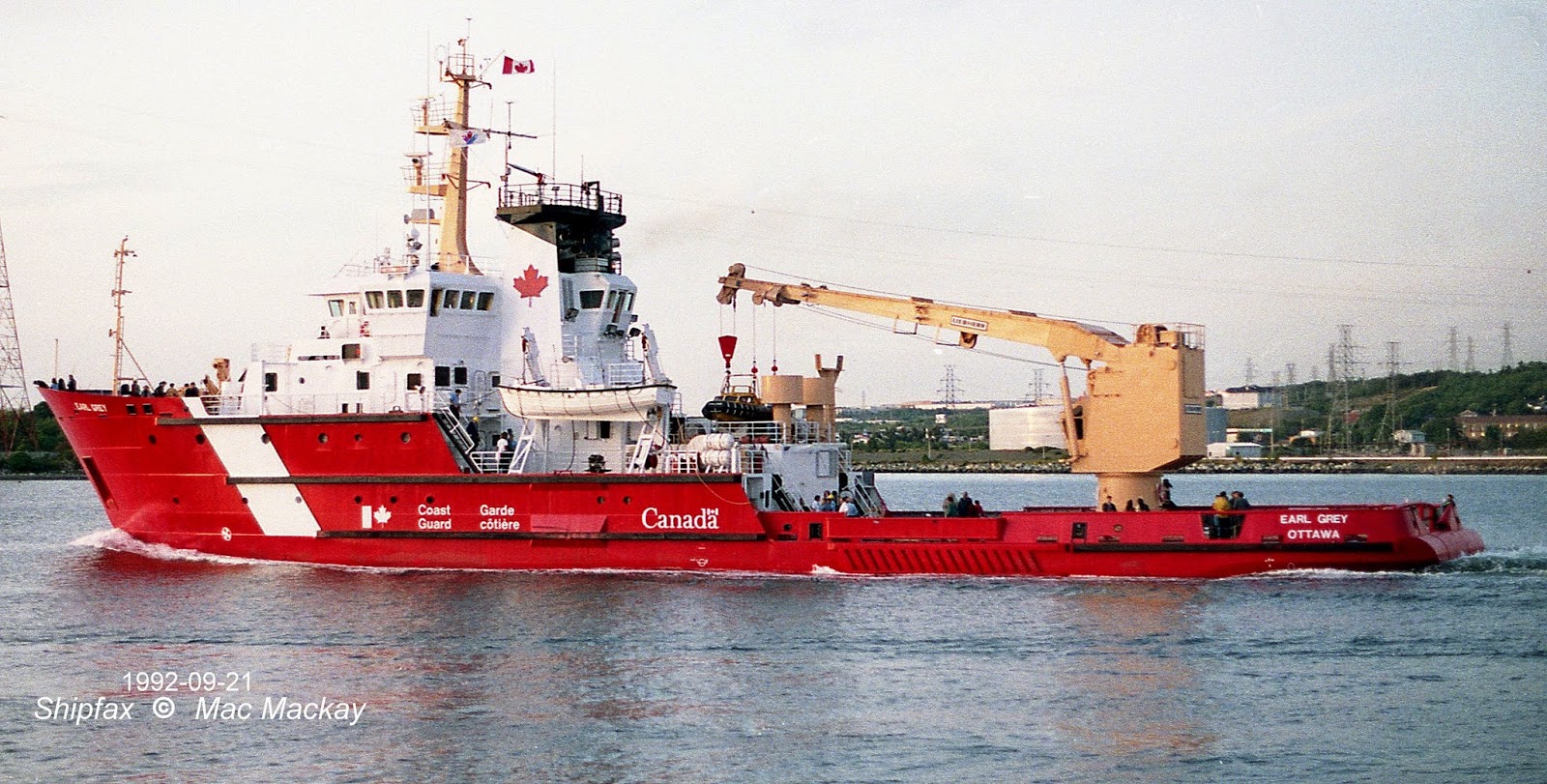 In supply boat fashion, the ship has an aft facing control bridge,clear deck and low freeboard.

Earl Grey and sister Samuel Risley were designated Type 1050 Medium Navaids Tenders-Light Icebreakers. It has 8,713 bhp from four Deutz diesels. [ Risley has 8,840 bhp from four Wartsilas.It was built by the Vito shipyard in Delta, BC, in 1985 and is based on the Great Lakes.] 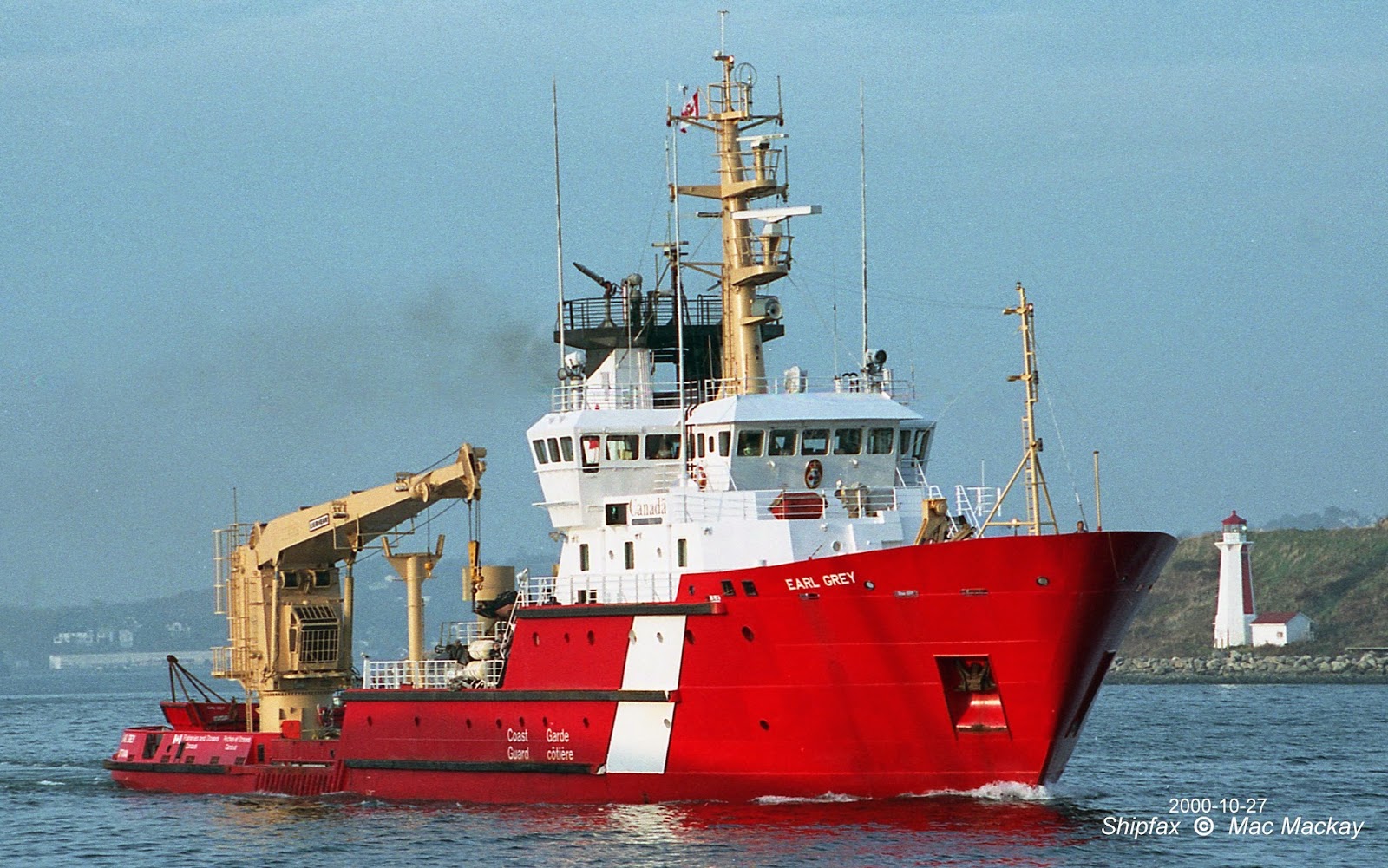 An attractive looking ship, despite the large crane, Earl Grey sails out of Halifax on one of its many trips. It is carrying a small landing craft athwartships on its stern.

Based seasonally in Charlottetown and home based in Halifax, Earl Grey travels widely in the region. 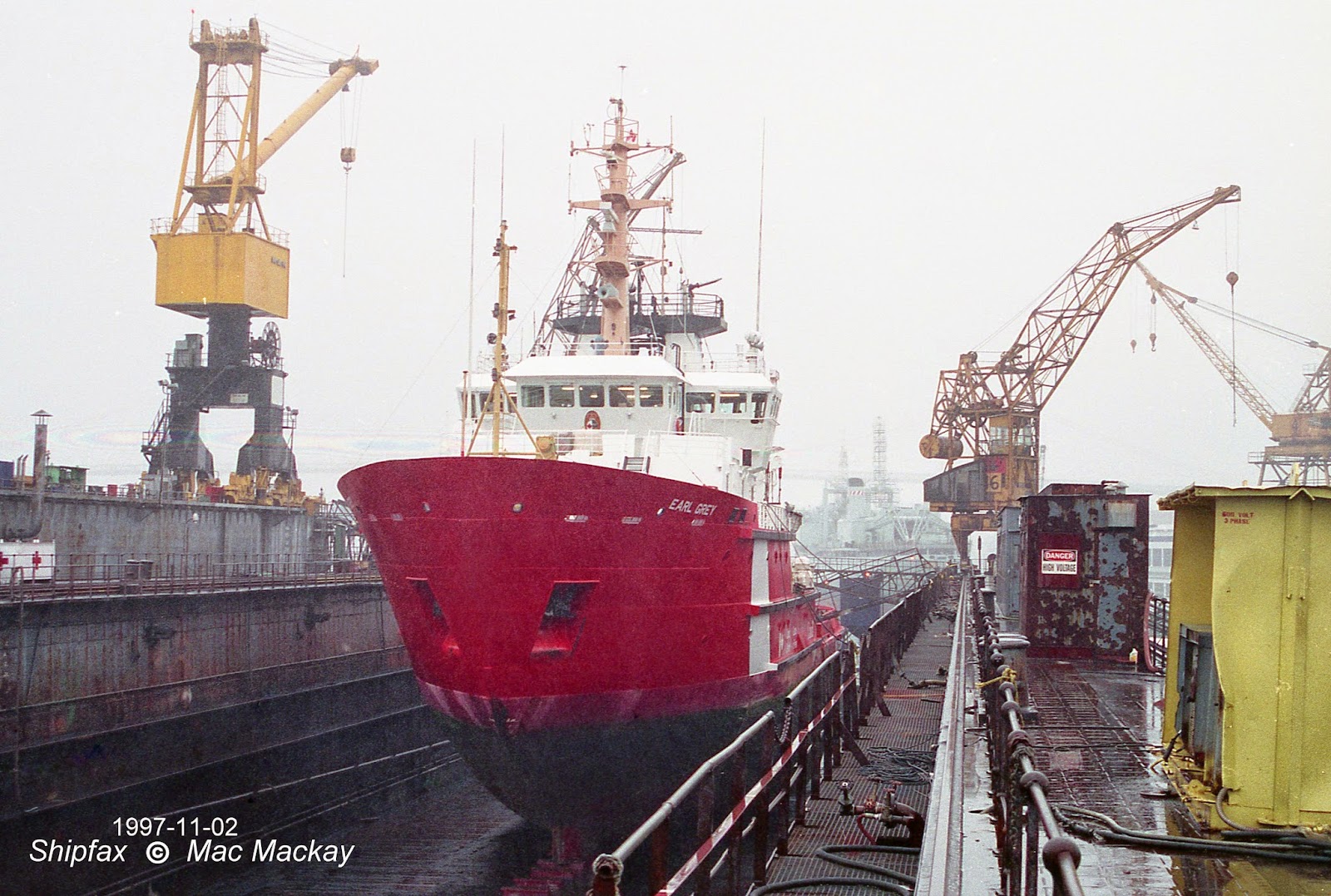 It is only when the ship is out of water that its icebreaking hull can be appreciated. It is seen here in the old Scotiadock at Halifax Shipyard.


Far from being ready for retirement the ship will enter a Vessel Life Extension refit in March to be completed by January 2016. Government documents indicate a maximum cost of $11,850,000. Work will include replacing its four Deutz main engine blocks with new Wartsila Deutz SBV9M682 blocks and numerous other upgrades to systems and accommodations throughout the ship. 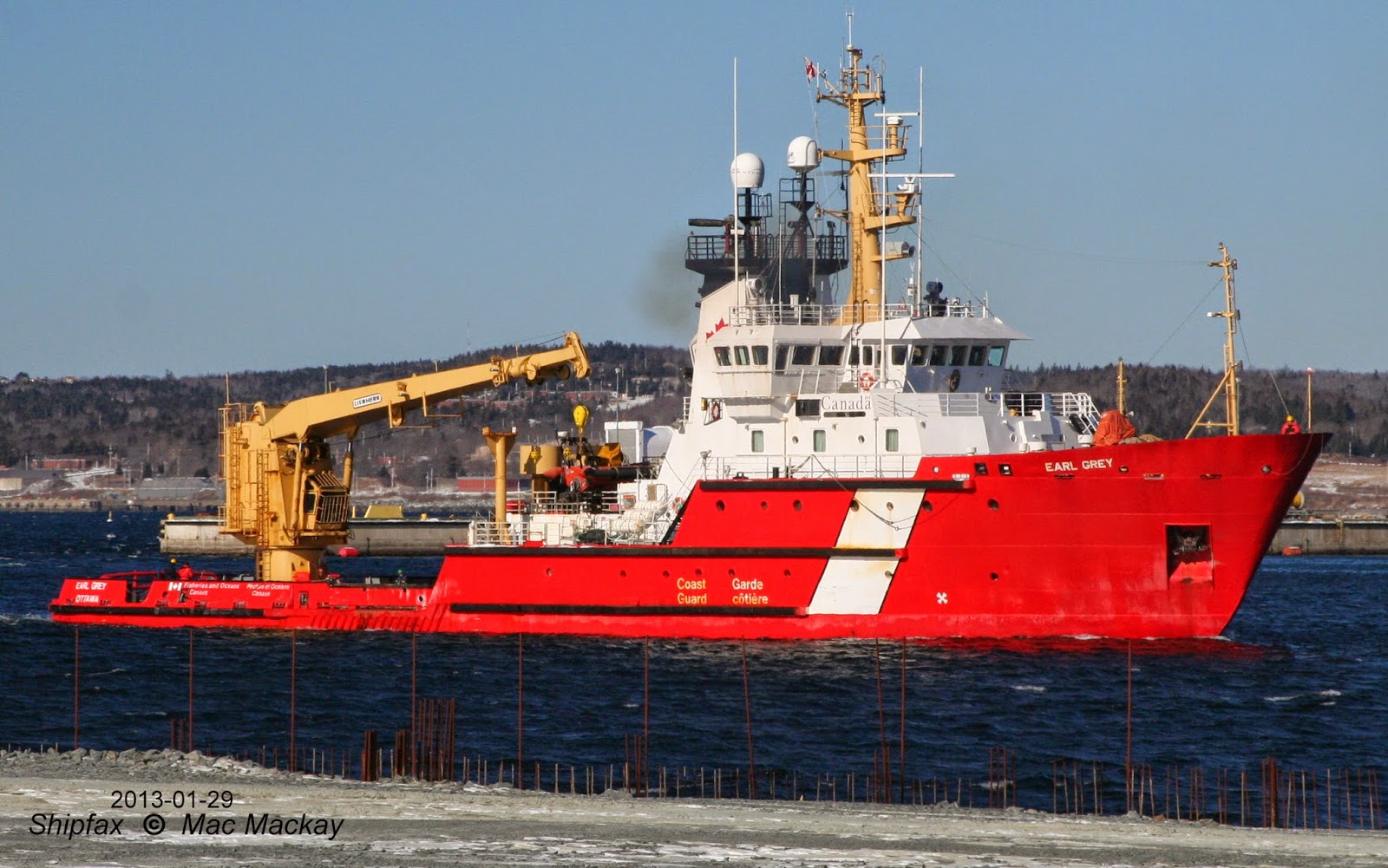 Some additions have been made to the ship over the years, but it remains largely unchanged in appearance.

The ship has had a number of distinctions in its career. Among them assisting in fighting the fire on the container ship Kitano in Halifax harbour (see the fire monitors on the funnel top platform), assisting the Swiss Air recovery efforts and in raising the Irving Whale.

Next year, in time to celebrate its thirtieth birthday, the ship will be almost like new, and possibly able to make it to fifty.