Heavy ice north of Prince Edward Island has reduced ferry service from Souris, PE to Cap-aux-Meules, Magdalen Islands to three times a week. The ferry C.T.M.A Vacancier will now travel only in daylight and will stay over night in Souris rather than returning the same day. Also the heavy icebreaker CCGS Henry Larsen has been brought in to escort the ship on its 50 mile crossing. A minor stack fire on February 5 also disrupted the schedule, when the ship was reduced to using one engine for one round trip, and was out of service for repairs until February 10.


The sandy archipelago in the middle of the Gulf of St.Lawrence is a part of the Province of Quebec, but is closest to Prince Edward Island by sea. Orginally a fishing outpost, it has since grown into a tourist destination, has an active salt mine and continues to be a centre for fishing. The Co-opérative de Transport Maritime et Aérien has provided transport services to the Magdalen Islands since May 28, 1944. Starting with a fleet of small wooden freighters, C.T.M.A. has built up over the years to the poijt of  providing three services are  provided for passengers and trucks, served by three ships.

All three ships are aging and C.T.M.A. is mulling over replacement possibilities. As it stands now the fleet consists of:

Madeleine
Operating between Souris, PE and Cap-aux-Meules, in season, Madeleine began life on the Irish Sea, sailing between Liverpool and Dublin as Leinster. Built in 1981 by Verolme Cork Dockyards Ltd in Cobh, the 9700 grt ferry has a capacity of 326 cars, 39 trailers and was fitted with 536 berths and was licensed for 963 deck passengers (later reduced to 958). The 20.5 kn ship and her sister Connacht (built in 1979) were operated by B+I Line. Although launched November 7, 1980 her builders financial woes delayed completion until July 3, 1981. Modifications in 1986 saw many passenger berths removed and replaced by lounges. There were still 15 deluxe berths on the boat deck, leaving a total of 242 berths. In 1988 she shifted to run from Holyhead to Dublin. In 1992 B+I was sold to the Irish Continental Group and the ship was moved to the Rosslare-Pembroke route and renamed Isle of Inishmore. In 1995 ownership passed to Irish Ferries.
The ship was slated to come to Canada in 1996, but government grants for terminal modifications fell through. Meanwhile the ship was renamed Isle of Inishturk on November 3, 1996 to free the name for a new ship. 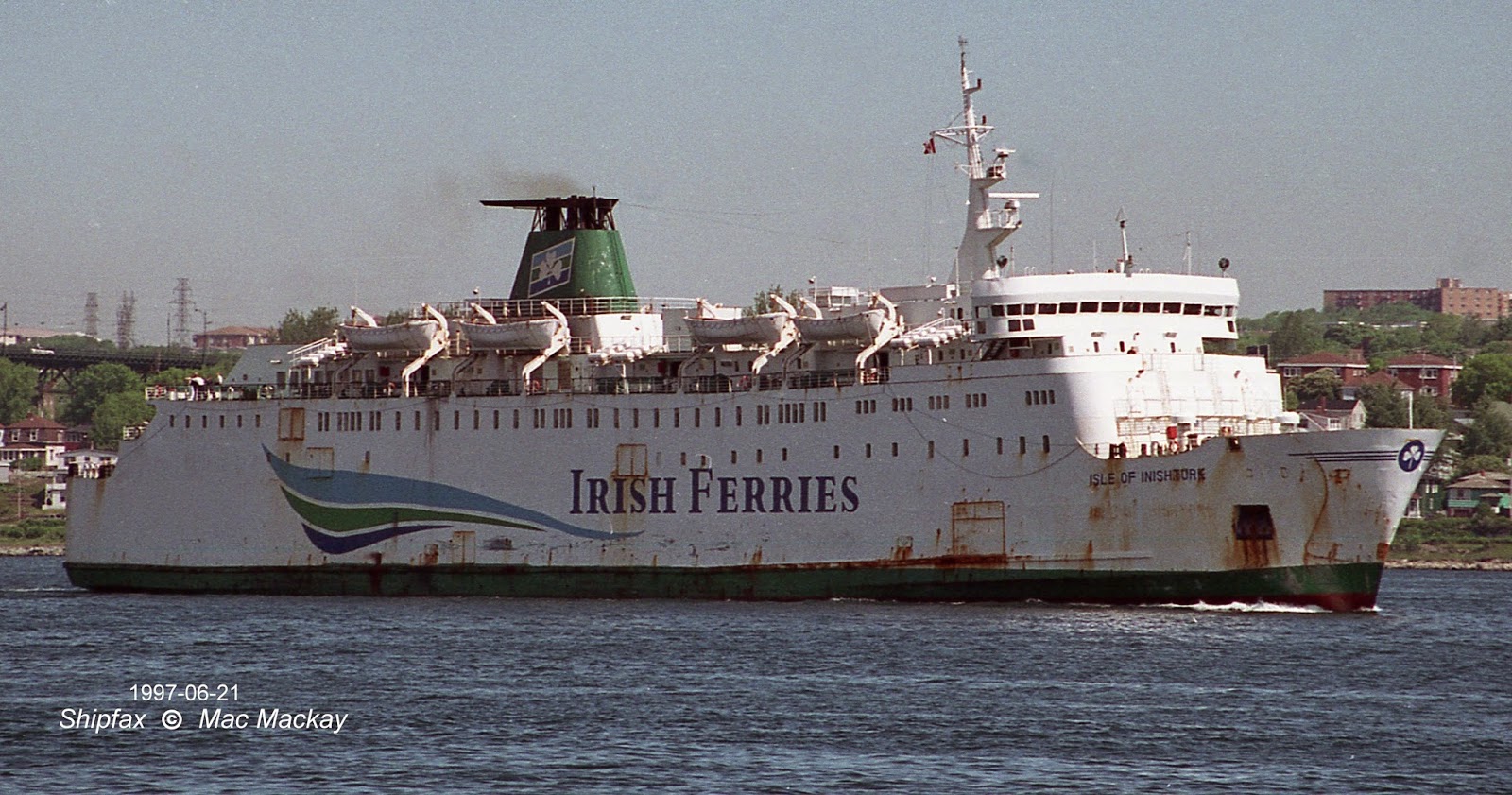 Isle of Inishturk arrived in Halifax June 14, 1997 under a provisional Canadian registration. After a week at Halifax Shipyard for additional compliance work, the ship sailed for Souris, PE on June 21. 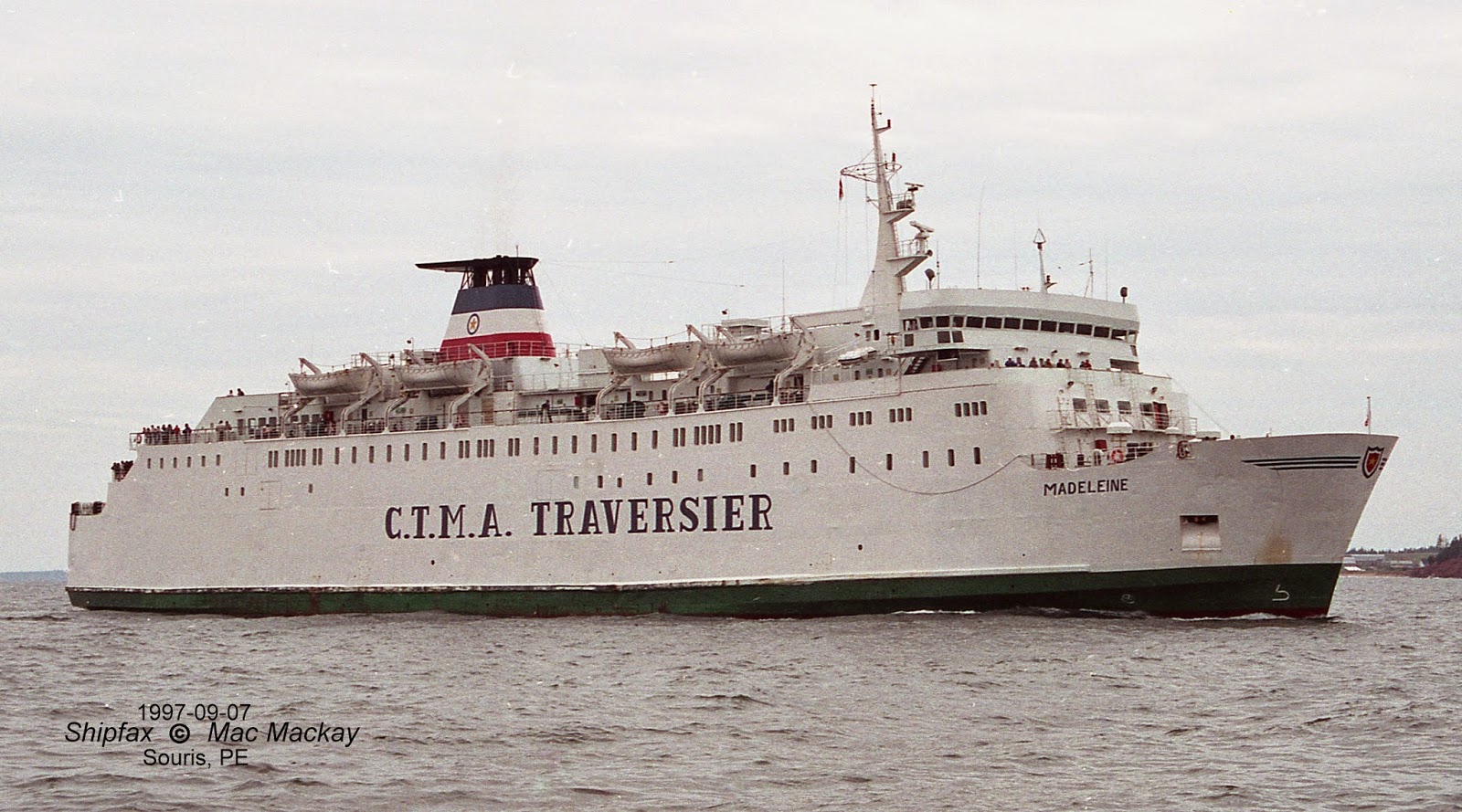 It had not yet been repainted or renamed. That did not occur until 1997 and it has sailed as Madeleine ever since. Built only to Ice Class 3, the ship lays up for the winter and is replaced on the Souris run by C.T.M.A Vacancier.
A refit in 2006 saw sponsons added to here stern for additional stability, and since the photo above red and blue stripes have been added to the paint scheme, similar to its fleet mates.

C.T.M.A. Voyageur
This RoRo ship was built in 1972 by Brevik Trosvik Verkstad A/S for Stena Line, but was sold during construction and delivered as the UK flag Andereida for Carpass (Shipping) Co Ltd. It was chartered to British Rail and served on the Channel and Irish Sea until 1980. In 1981 it became Truck Trader under the Greek flag for Covenant Shipping Inc,  managed by Manta Line. I assume she worked in the Mediterranean.
In 1984 the ships became Sealink for Marlborough Sealink Inc initially under the Cyprus flag. It then went to New Zealand where it operated between Picton and Wellington on charter to South Pacific Navigation Co under the New Zealand flag.It was laid up in Wellington in October 1985 and in the fall of the next year was renamed Mirela and returned to Piraeus October 31. It sailed December 4 and arrived in Cap-aux-Meules December 21, 1986  where it was renamed C.T.M.A. Voyageur. 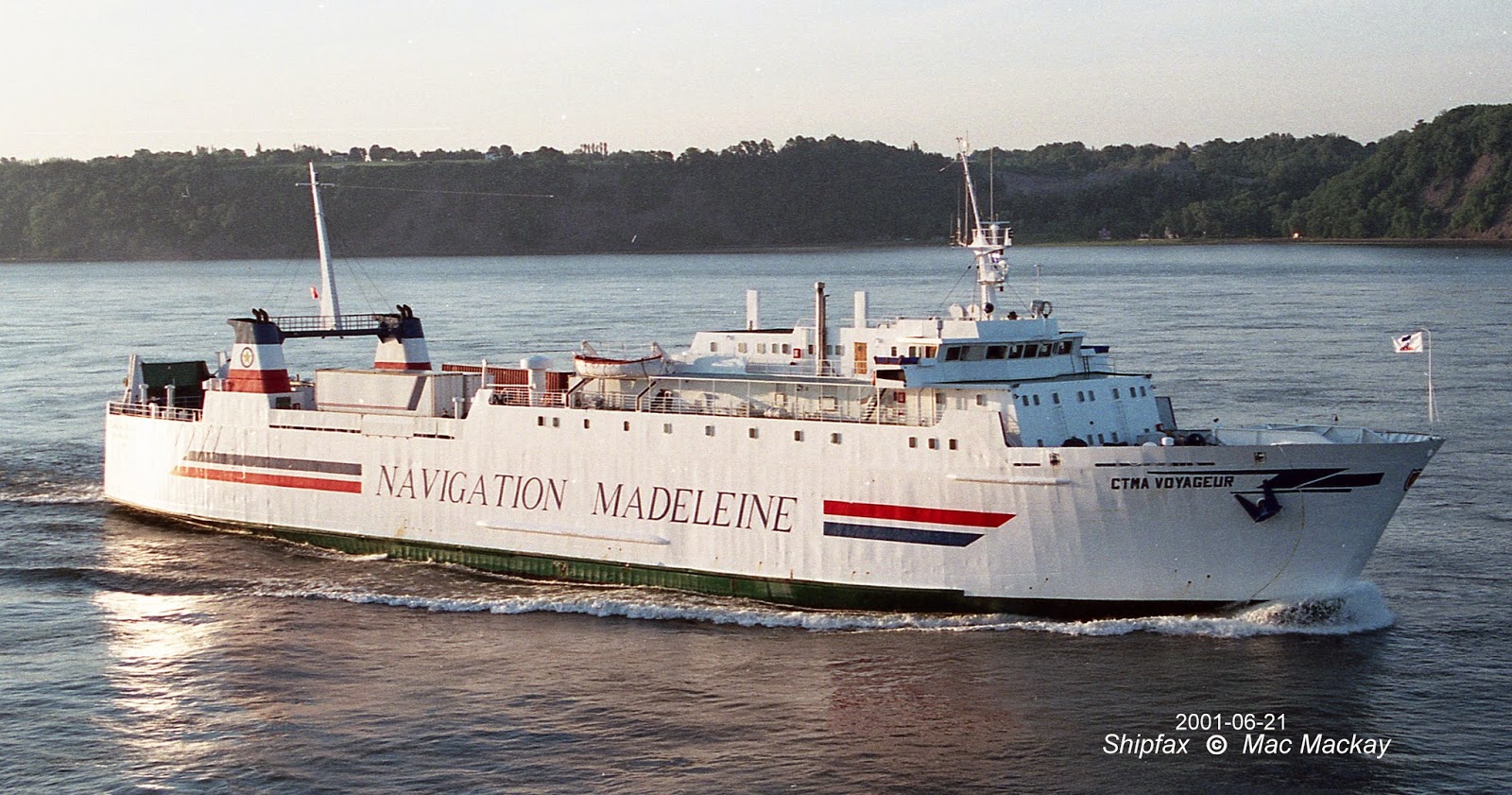 It went into service for C.T.M.A, in the spring of 1987, arriving in Montreal on its first trip May 9 replacing Madeleine on a weekly run with stops in Matane. In the winter of 1988-89 it began a shorter route, between Matane and the Magdalen Islands, but has filled in on the Souris - Cap-aux-Meules route. 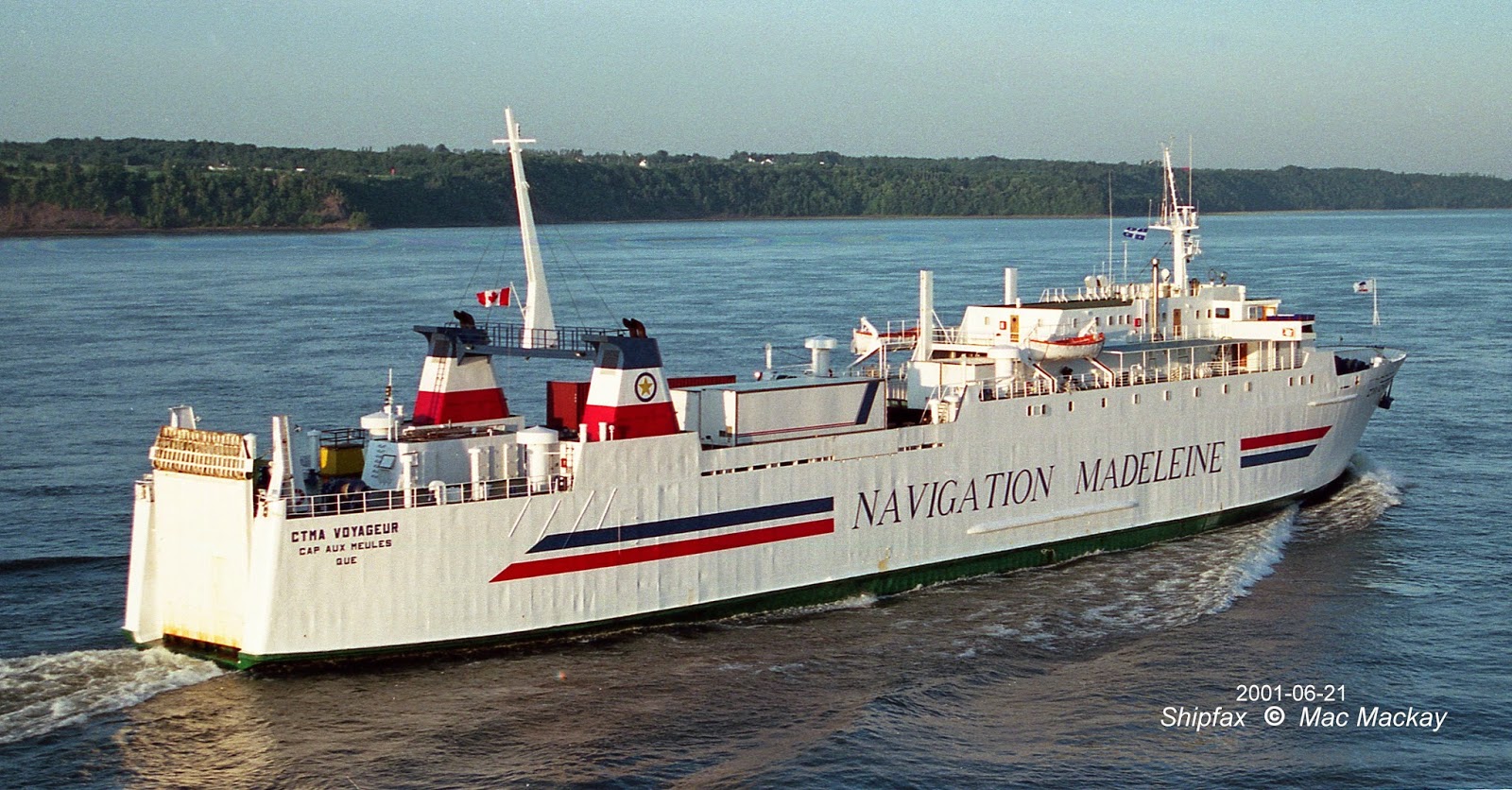 When built its tonnage was listed as 1579 grt, as its car deck was considered to be a weather deck. Under Canadian registry this was altered to 4528.61 grt. It also has 16 berths and could carry 20 deck passengers. It was later permitted to carry 60 deck passengers. Its cargo capacity was 2 trucks, 20 cars, and 10 trailers. It also had a listed TEU capacity of 30. It was equipped with bow and stern doors and ramps and also had side doors.

C.T.MA. Vacançier
Flagship of the C.T.M.A fleet  is the C.T.M.A. Vacançier dating from 1973 and the famed J.J.Sietas shipyard in Hamburg. As Aurella it operated in the Baltic Aland Islands until 1981.It was then acquired by Irish Ferries, renamed Saint Patrick II and worked as a summer supplement on the Ireland-France service. In winter it was chartered out to most of the Irish Sea operators over a period of years. In the winters 1992-1995 it operated for Tallink of Estonia, back in the Baltic.
It was chartered out again in 1997, this time to Hellenic Mediterranean Lines as Egnatia II running Brindisi-Patras. Then in 2000 it entered another charter, this time to Balear Express of Spain as Ville de Sète. When that operation went bankrupt it was laid up in September 2000. In March of 2000 it was chartered to Swansea-Cork Ferries as City of Cork.  On completion of that work it was idled until March 2002 when it was sold to the Canadian government and became C.T.M.A. Vacançier. 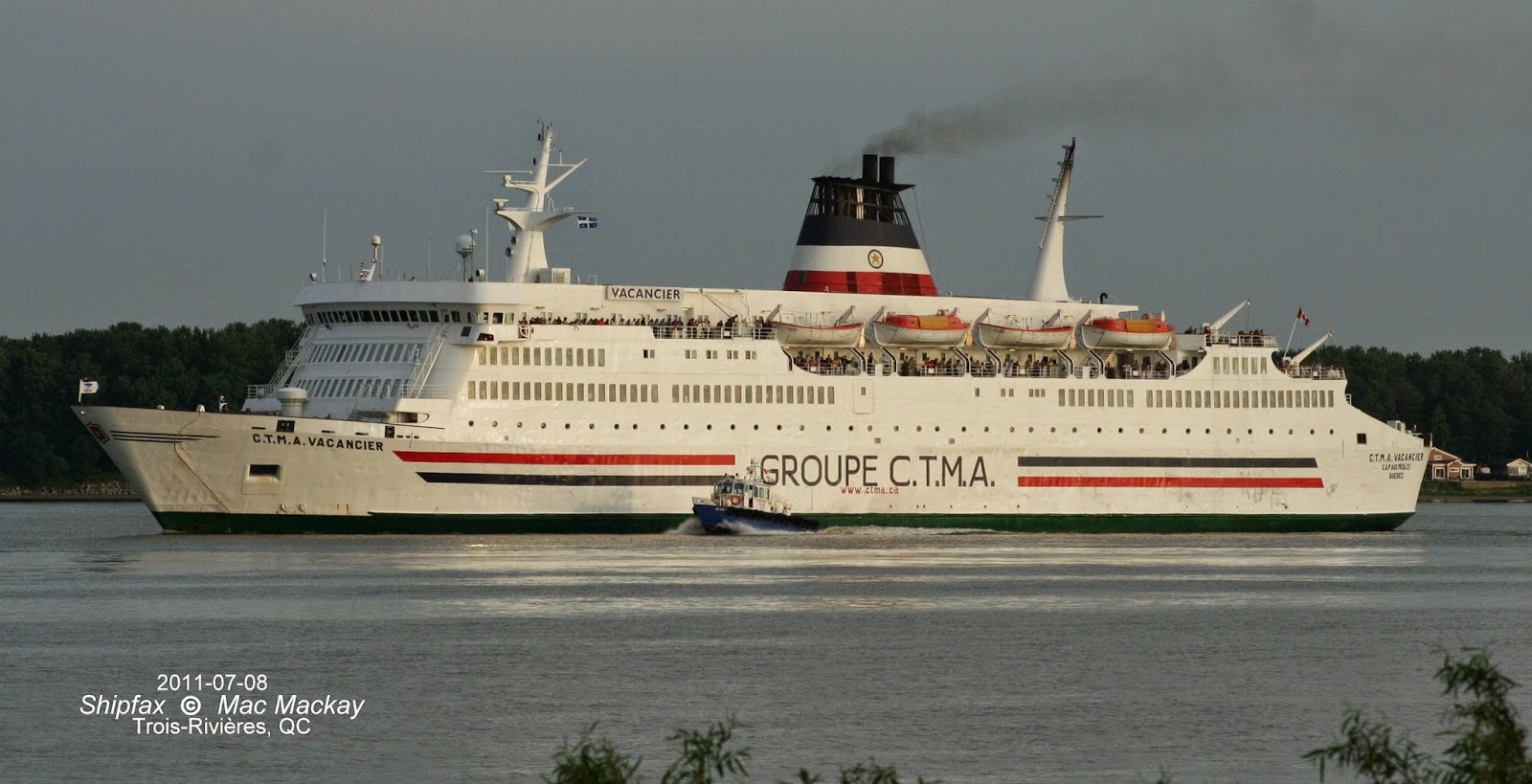 C.T.M.A. Vacançier changes pilots at Trois-Rivières Ouest. (The ship is a notorious smoker.)

It entered into a weekly return trip cruise/ferry/freight service (in season) running from Montreal (Friday) to Chandler, QC (Saturday) to Cap-aux-Meules.(Sunday) returning on Tuesday to Chandler (Wednesday), Quebec City (Thursday) and Montreal (Friday). 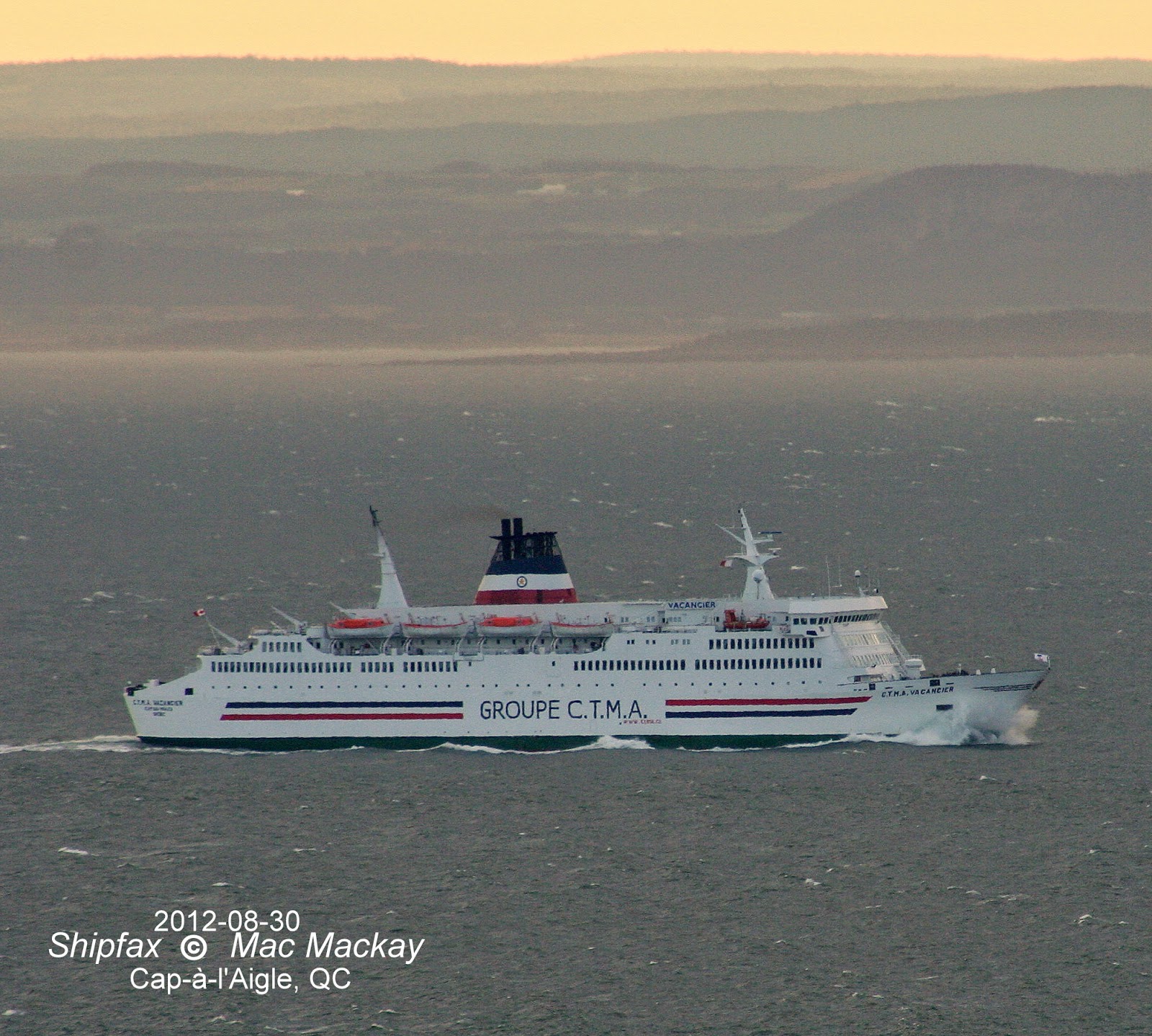 Shoredwellers set their clocks on Thursday mornings as the Vacançier works upriver toward Quebec City- rain or shine.The comforting thump of its twin V-16 Stork-Werkspoor engines announces the ship's passing well in advance. Their 18,900 bhp give the ship 21 knots..

In the fall it usually lays over in Montreal for six weeks or so for refit, then takes over the Souris ferry service in February through the worst of the winter. It is a Baltic Ice Class 1, 1A ship, so was built to work in the ice. However it needs icebreaker escort in the thick ice.
It was built with a capacity of 175 cabins (792 berths), 708 deck passengers, 200 cars, and 15 trucks, loading through bow and stern doors.

C.T.M.A has an extensive web site with schedules and tourist information:


Recently C.T.M.A. suggested that two new high ice class cruise ferries could be built at the Davie yard in Lévis and would be able to maintain two services year round. One ship would operate the summer cruise service from Montreal, switching to Matane for the winter and the other would operate the Souris service. Certainly the current fleet is in need of replacement, and should be able to operate without intense icebreaker assistance. However there are large dollars involved, and a very strong business case would have to made.

The Davie yard, now on an upswing after many lean years and several bankruptcies, would be a logical place to built the ships. In fact as the only major shipyard in Canada not tied up in the NSPS program of building naval and government vessels, it is the only sensible domestic choice for the work.

British Columbia Ferries has apparently done well with buying new ferries from Germany, but another Quebec company, Transport Desgagnés has had a tale of woe with its new Bella Desgagnés. Delivered only last year (and years late due the failure of its original Croatian builders) it had major teething problems early in its first season, and has now been withdrawn for the winter for undisclosed problems. No warranty exists with its failed builders.

Turkish built tankers have had their share of problems once delivered to Canada.

Oceanex also had problems with its German built Oceanex Connaigra, and although these were likely repaired under warranty, it meant that the ship was out of service for months at a time and had to go to the United States and finally to Ireland for repairs.

Davie is presently contracted to built two pioneering LNG powered ferries for the Société des Traversiers de Québec, and would certainly be a logical choice for new C.T.M.A. ships.