Continuing the story of ferries named Halifax and Dartmouth a fourth set of ferries bearing the names entered service in 1979. Although they looked vaguely similar to their predecessors, they were radically different in many ways.
Both boats were built by Ferguson Industries in Pictou , NS. Dartmouth III arrived from the builders May 3, 1979 and Halifax III in July. They spend several months on trials and in crew training due their unique characteristics. 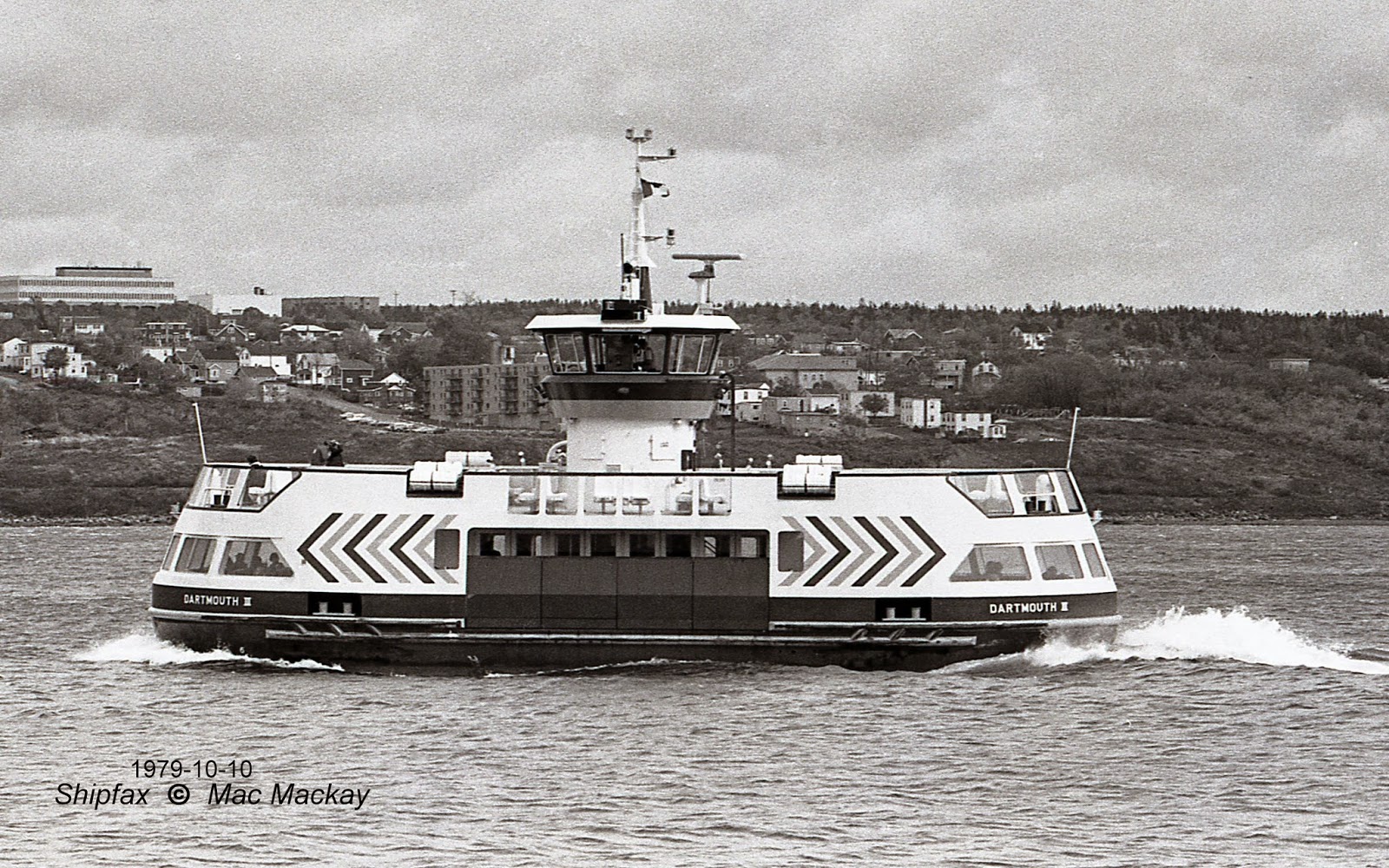 On Day 1 of the service, Dartmouth III heads for Dartmouth. The passenger loading side has ramps that fold up flush with the hull. (Shipfax made a one way trip on each boat on Day 1) 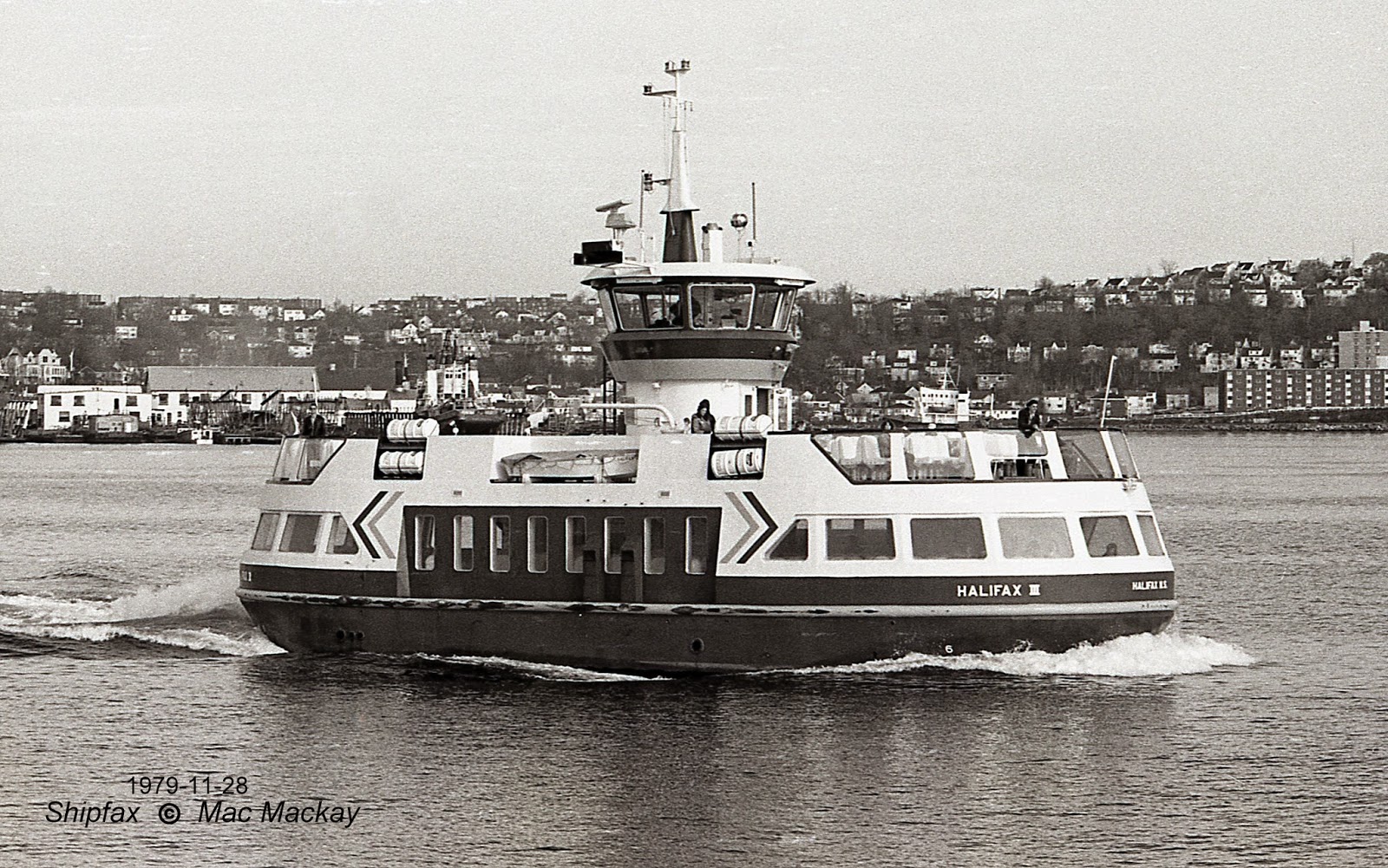 Halifax III approaches Halifax. The off-side of the boats has more windows, and engine exhaust vents just above deck level.

The hull was still short and wide with rounded ends, and the wheelhouse was perched amidships (but offset to one side), but the similarity ended there. The most obvious new feature was that they were side loading. Passengers embarked and disembarked on new floating landing stages, and remained under cover and out of the weather all the way through the new ferry terminals, that were built as part of the ferry replacement program.
Gone also were the ladies and gents cabins, although that segregation had ended many years before. Passengers were accommodated in one full width cabin, with molded plastic seats, instead of slatted pew like benches and for the diehard outdoors types, there was an open deck with similar plastic seats. 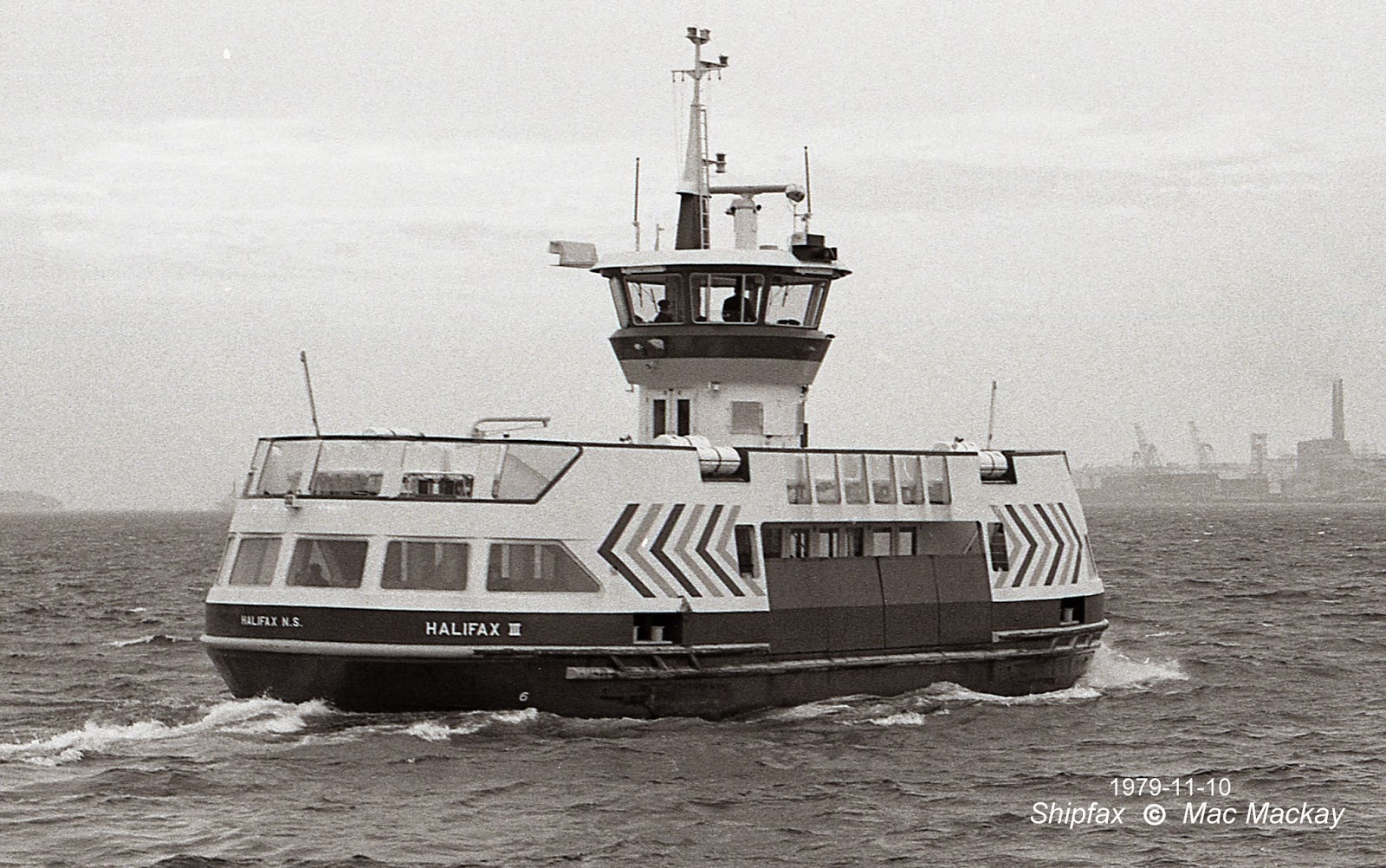 The most novel aspect of the new boats however was not visible. These were the Voith-Schneider propulsion drives, located bow and stern. Consisting of variable pitch vertical blades, rotating on a turntable, they allowed the boats to move sideways with ease. Direction and speed were controlled by blade pitch, permitting constant engine speed and better fuel efficiency. The boats could travel equally wqell ahead or astern.. This propulsion system had been in use on tugs for many years (including navy tugs in Halifax, built at about the same time) and on two Northumberland Strait summer ferries. It was a relatively costly system and was unusual in smaller vessels such as these.

A joint christening ceremony was held September 9, 1979 with Lorraine Morris, the wife of Halifax Mayor Edmund Morris sponsoring Halifax III and Genevieve Brownlow the wife of Halifax mayor Daniel Brownlow performing the honors for Dartmouth III.
The boats entered service on September 10, 1979 and have been running ever since. 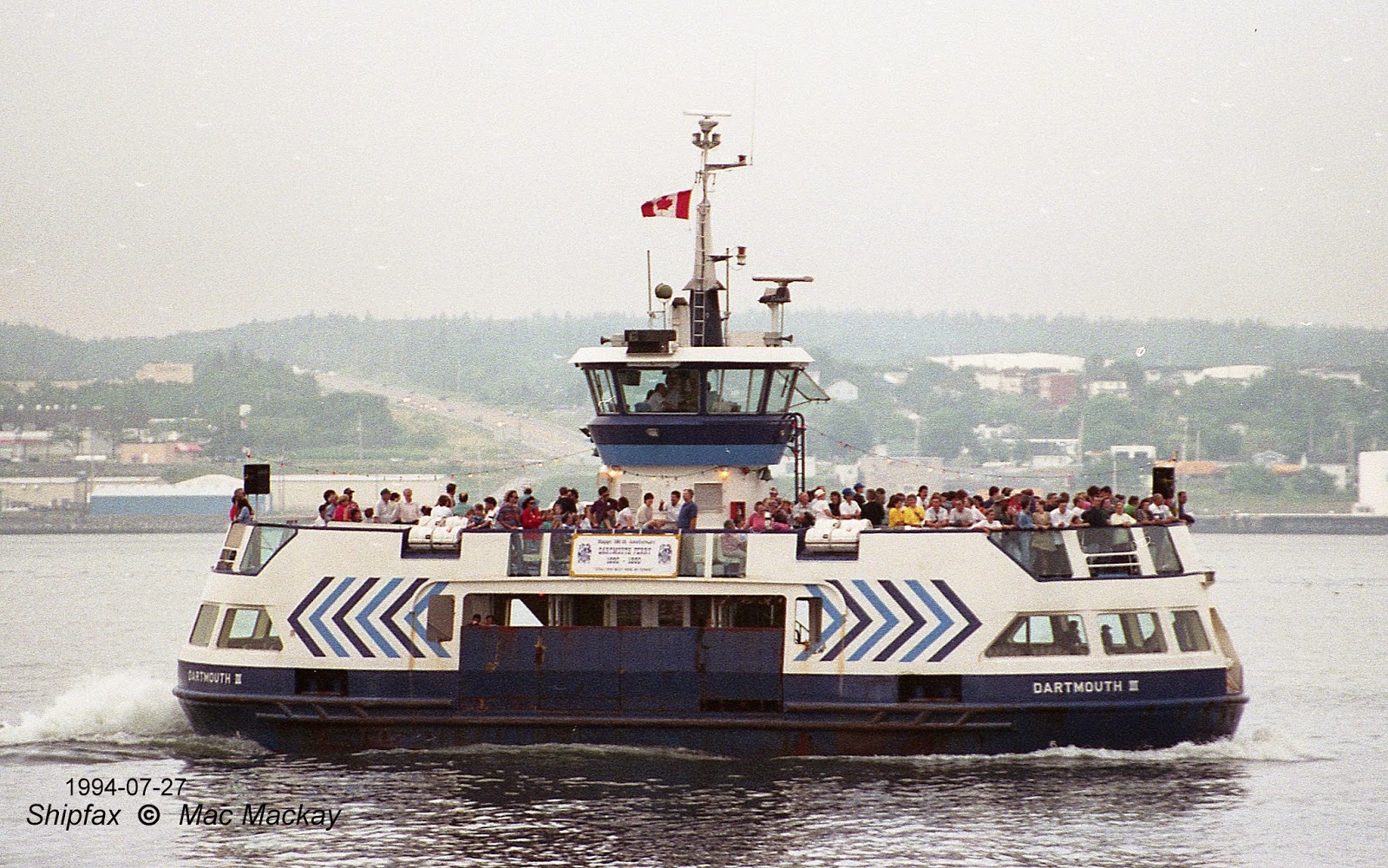 The original colour scheme featured alternating dark and light blue chevrons and a light blue stripe on the wheelhouse.
Management of the boats has changed over the years, and with it their various paint schemes.Original owners were the City of Dartmouth. In 1981 Halifax and Dartmouth merged their bus systems, forming Metro Transit, and in 1994 it was entrusted with the operation of the ferries. Fare structures are integrated, and bus stops are located at the ferry termini. 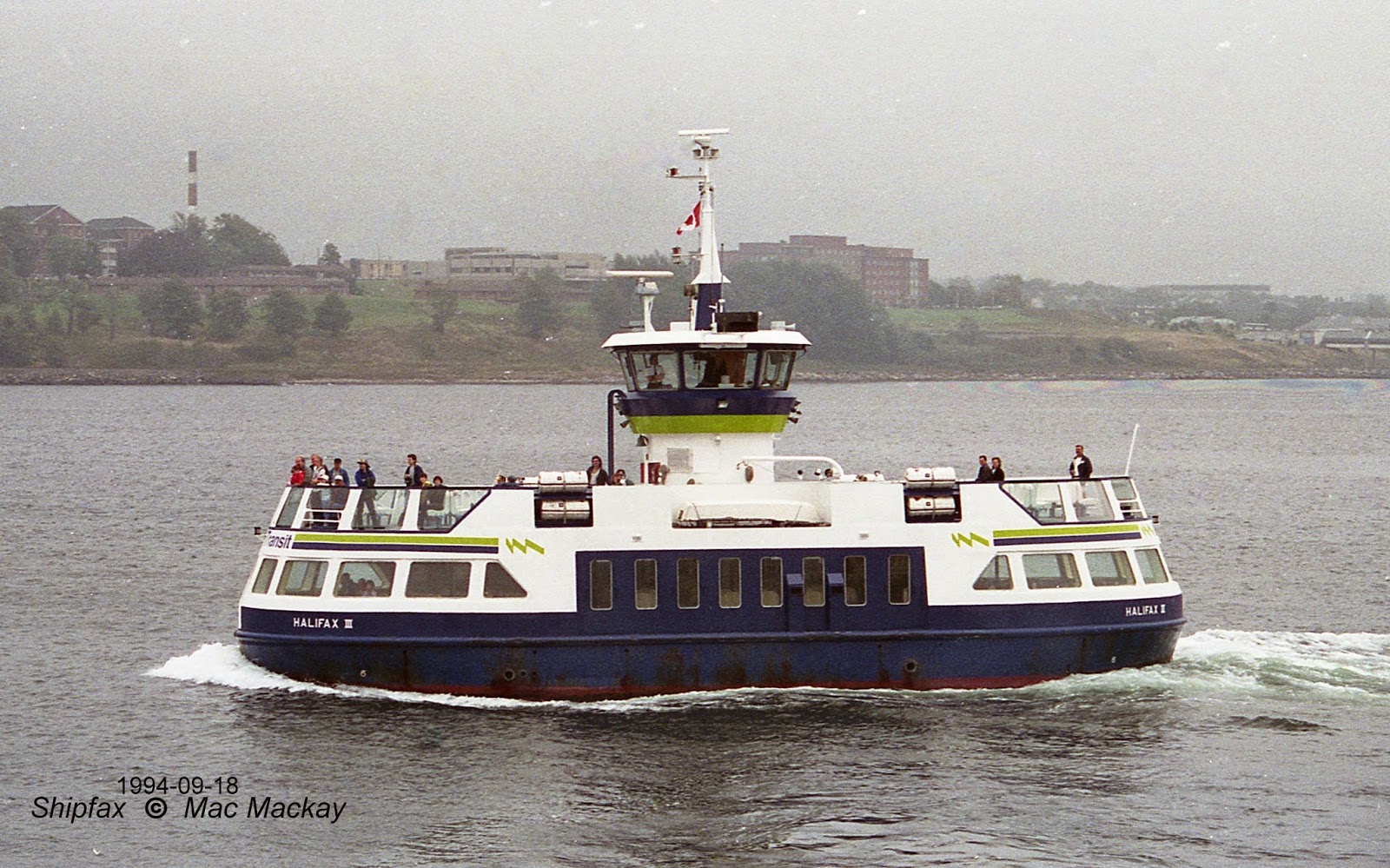 In Metro Transit colours, the light blue became green, and chevrons were removed, a stylized "M" appeared with a green blue band. 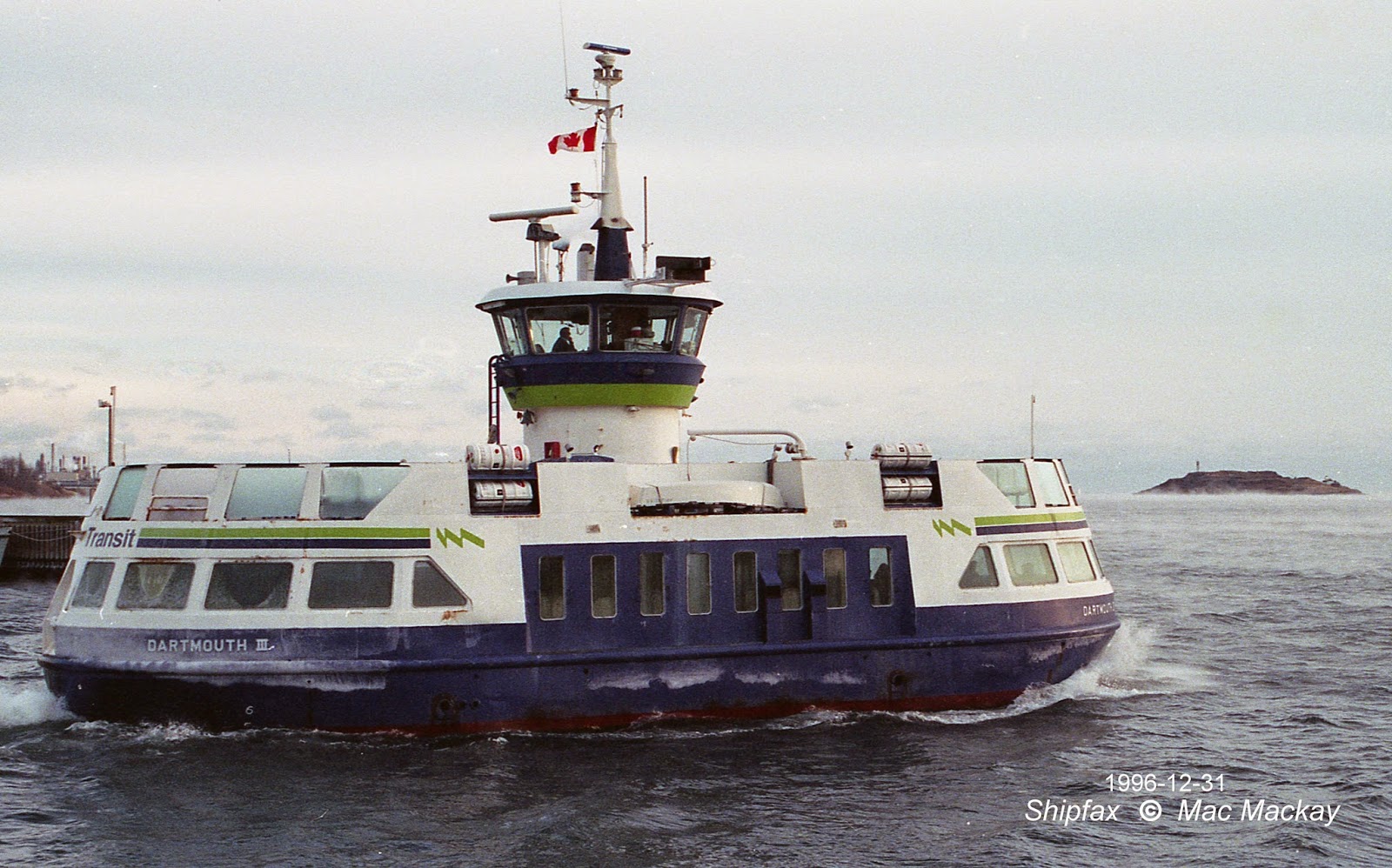 The words Metro Transit also appeared bow and stern. in line with the stripe. 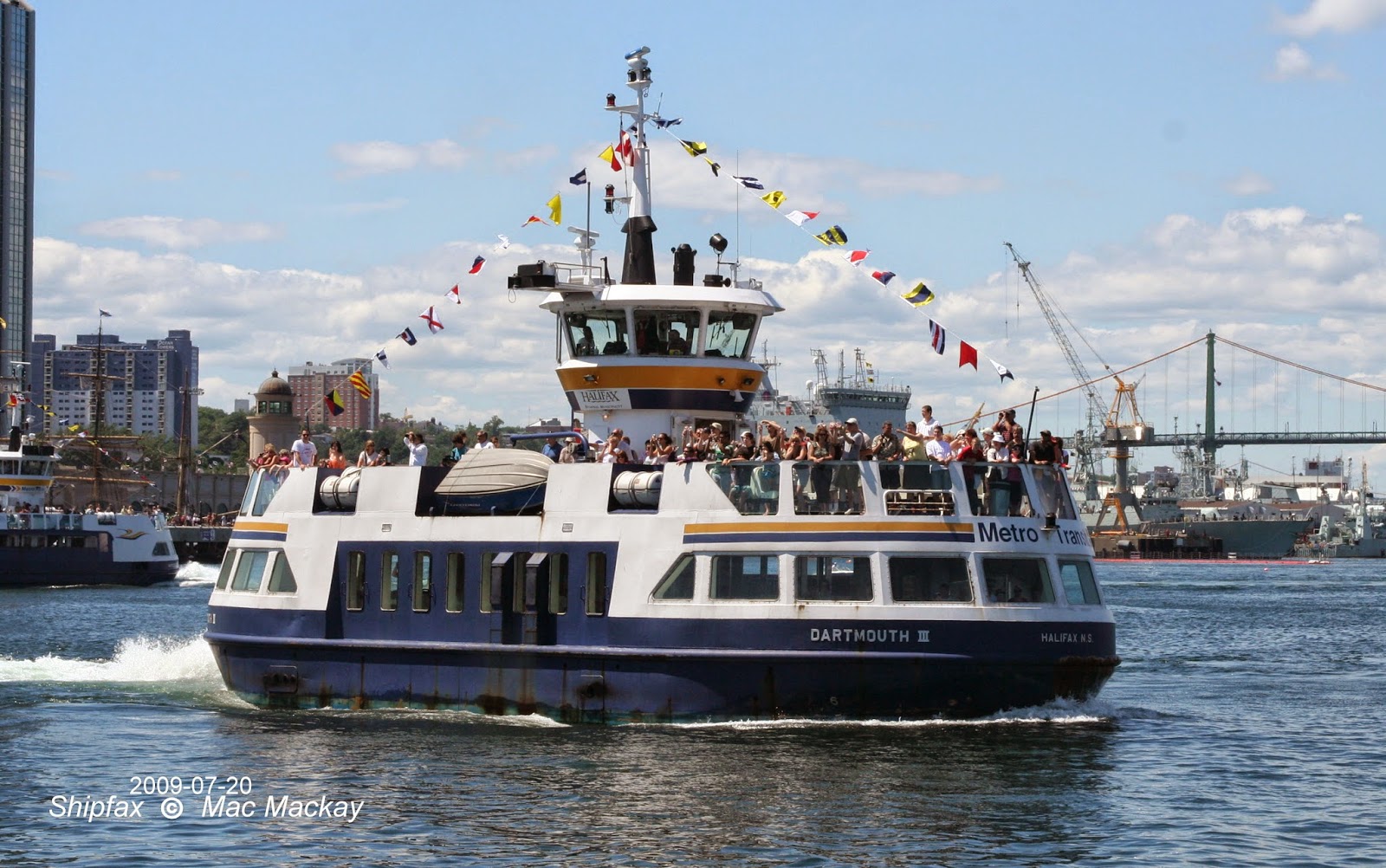 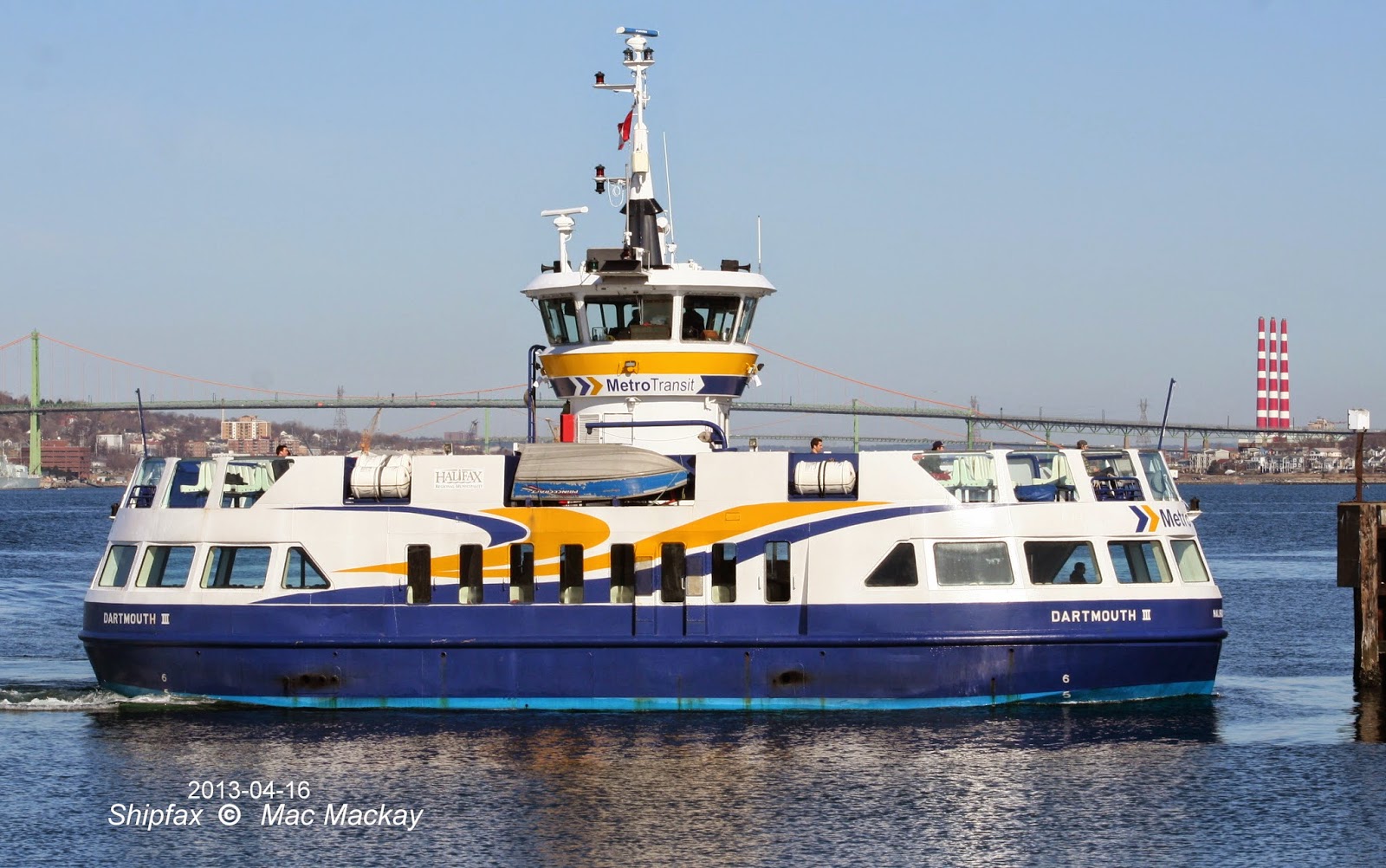 Another graphic change features a dramatic swoop of blue of yellow. Note also that the mast has been extended and another radar scanner mounted on the top. 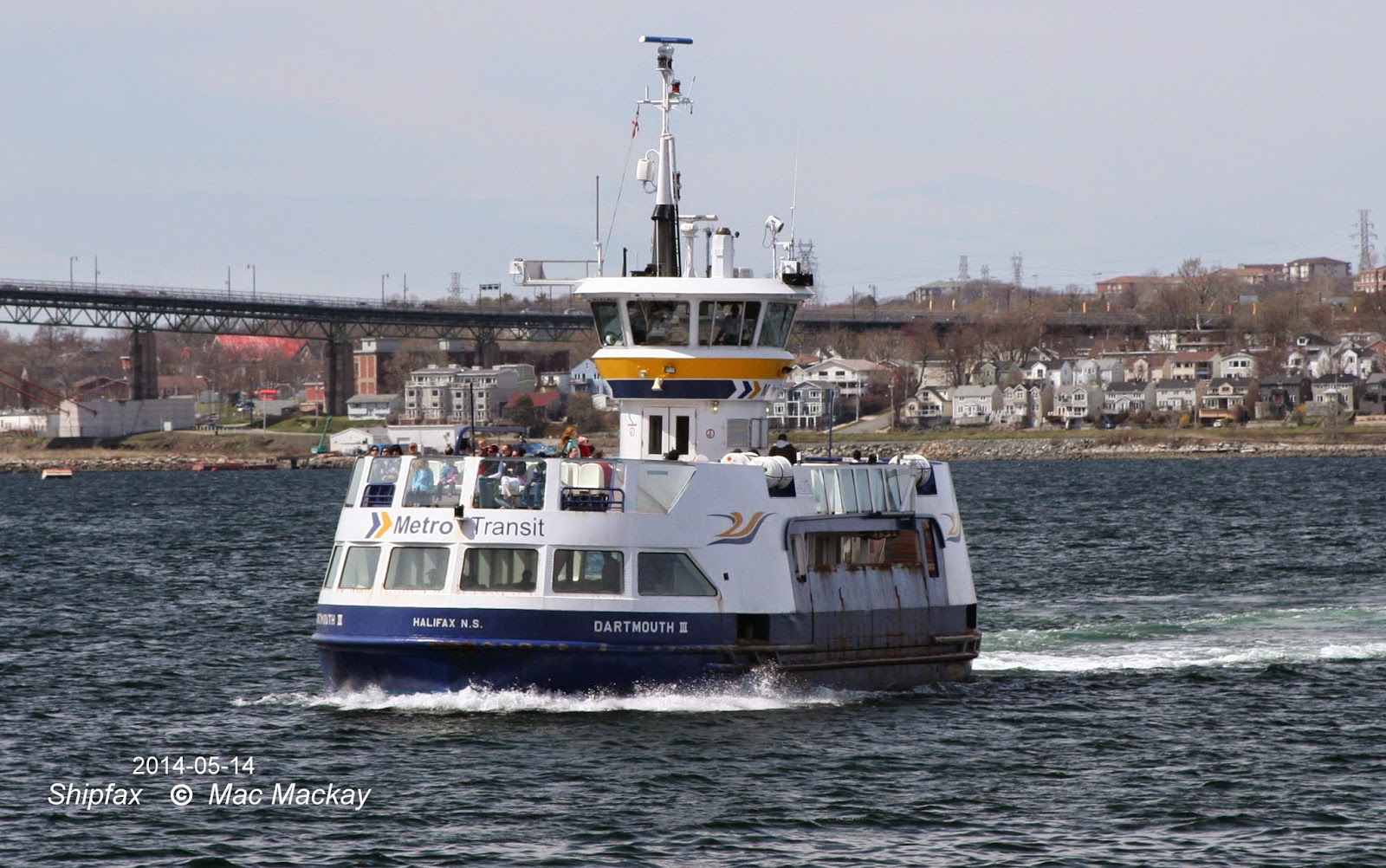 The boarding side is less dramatic, but the chevrons have returned beside the words Metro Transit.

In July 2014, Metro transit was renamed Halifax Transit, as part of a rebranding of the HRM to simply Halifax which had started in April. Since then they have changed their graphic design once more, with the cross bar free HALIFAX. This was too late for the newest ferry, so another repainting is expected in 2015.
(Urban Legend has it that a graphic designer who had been staring at his Samsung monitor too long, decided to drop the cross bars on the letter A in Halifax and declared "what a good boy am I")

Halifax III and Dartmouth III were joined in 1986 by Woodside I a virtually exact sister, when a new route was inaugurated between Woodside and Halifax. Any of the tree boats might be found on any run, to allow for maintenance work or training..

In 2014 A.F.Thériault + Son of Meteghan River, NS, delivered Christopher Stannix, an upgrade of the same basic design. A fourth boat, to be named Craig Blake will be delivered by the same yard in 2015 and is slated to replace one of the original pair, and a third new boat will join in 2016.
However due to a two year long redecking of the Angus L.Macdonald bridge, ferry traffic is expected to increase, at least for a time, and so it is likely that the displaced boat (s) will be kept on for backup and standby.

Perhaps there will be a return to excursions, which used to happen from time to time, as family day for the ship's crews, or for open house days on George's Island.. 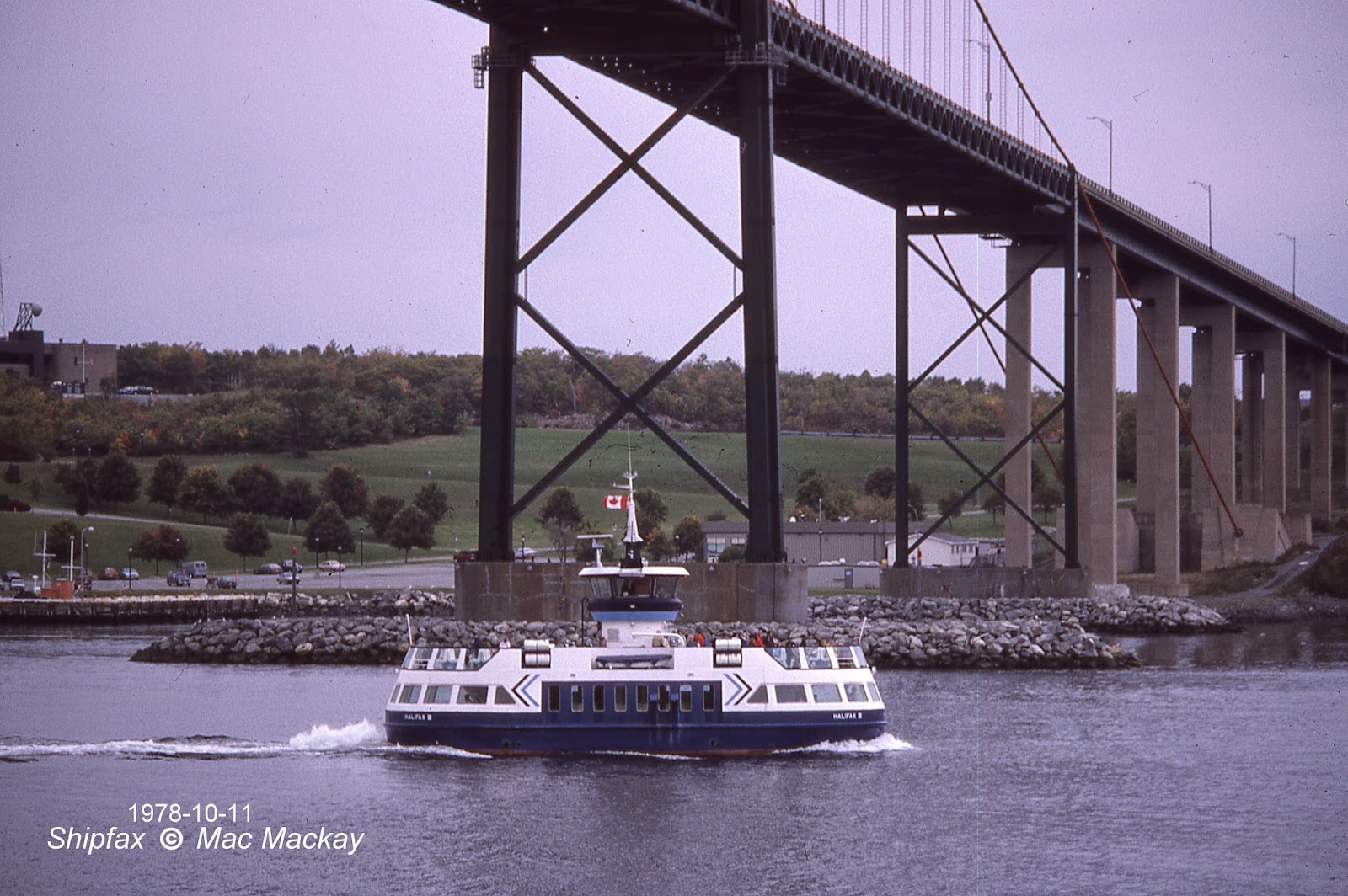 Halifax III returns from a rare trip to Bedford Basin, passing beneath the A. Murray MacKay bridge. The excursion was part of family day for the ferry crews. A ferry service to Bedford has been an on and off topic for years, but has been quiet lately.

Another interesting aspect of the boats is that they identifiable bows and sterns. The bow is identified by the centre line anchor mounting. 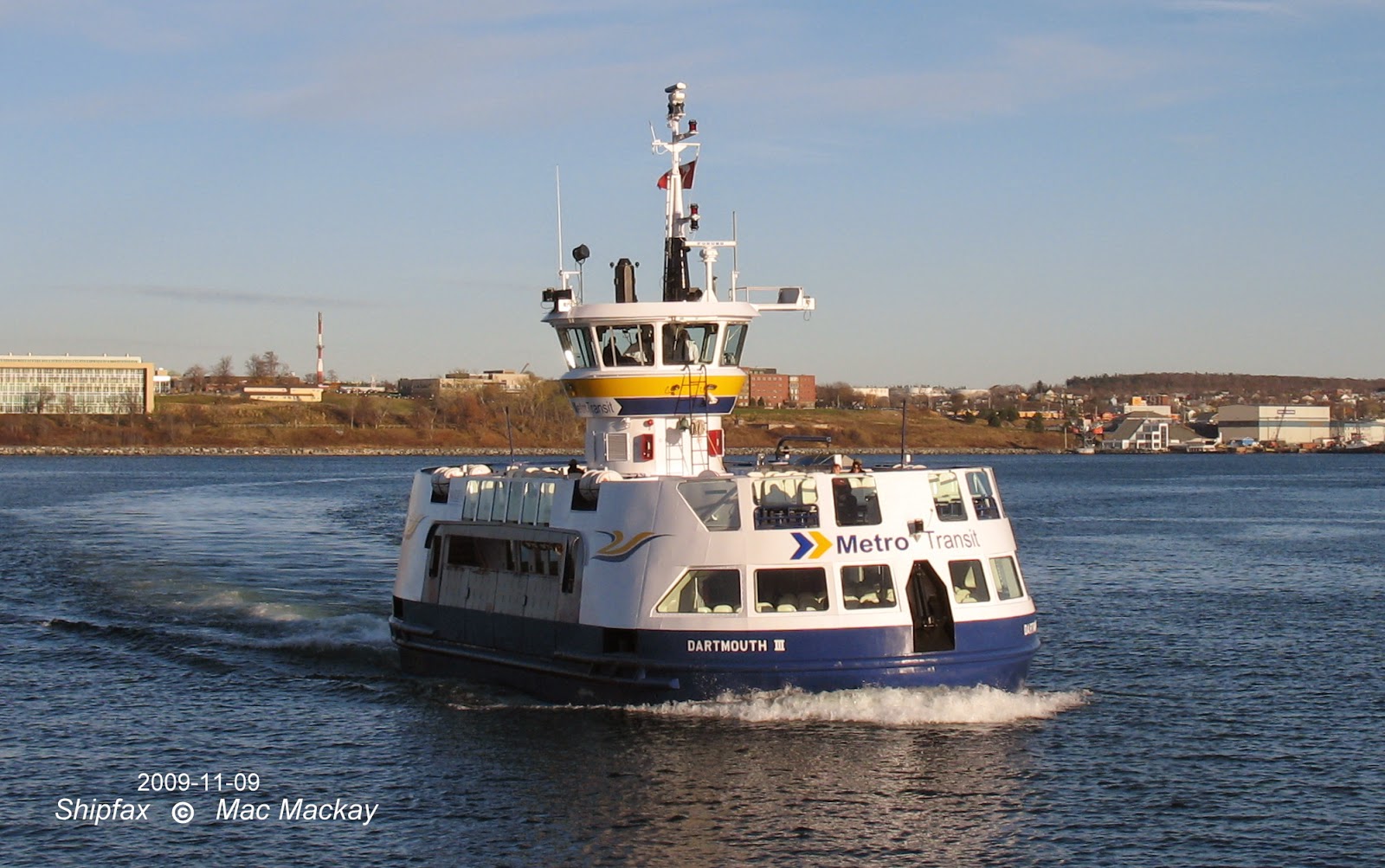 Thus passengers board via the starboard side, and the wheelhouse is offset to starboard. The stern is flush without an anchor, and carries the port of registration 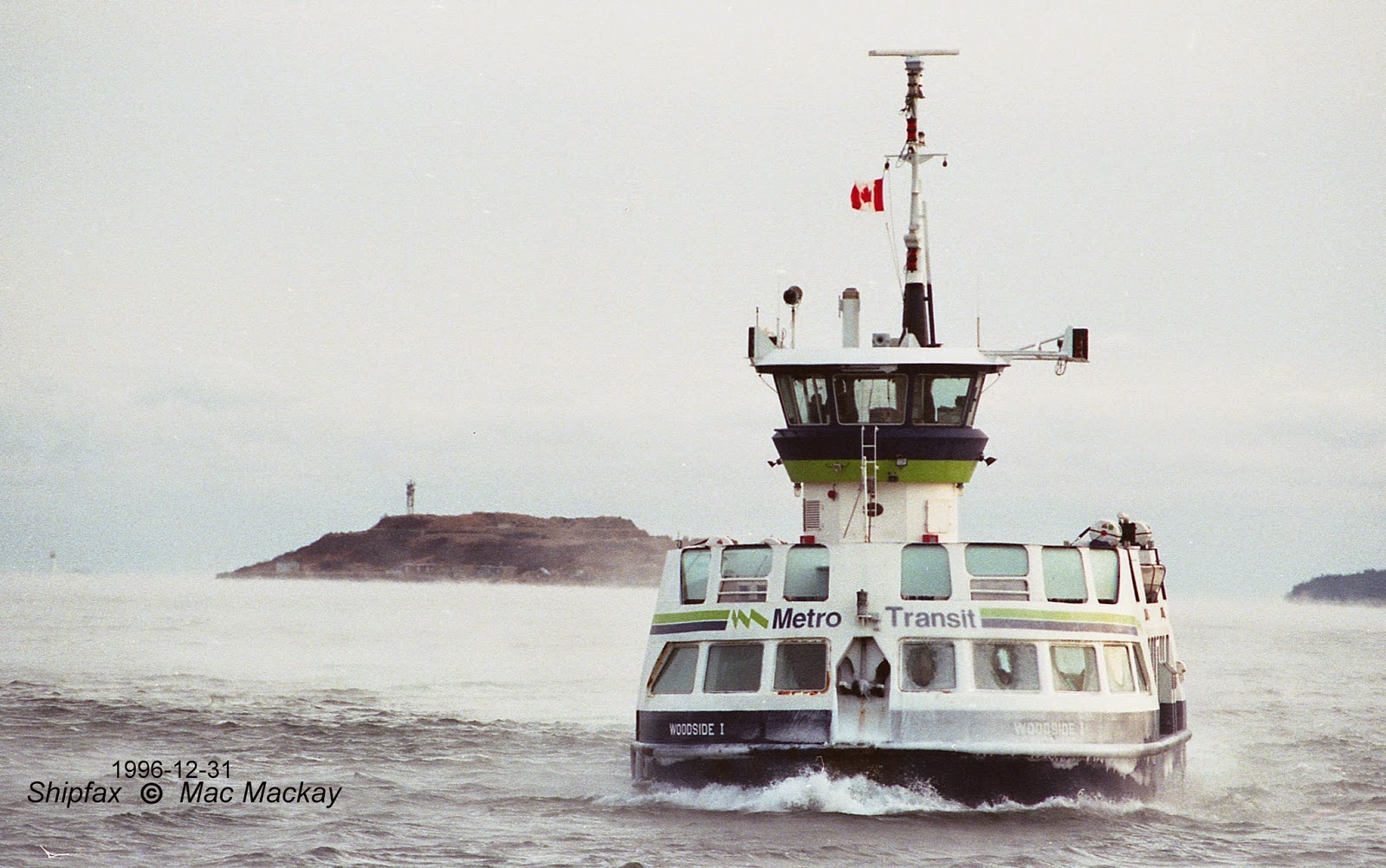 Woodside I leaves Dartmouth, working stern first toward Halifax. All lights are duplicated. so the boat can work in either direction at night. The offset wheelhouse shows up in this photo. 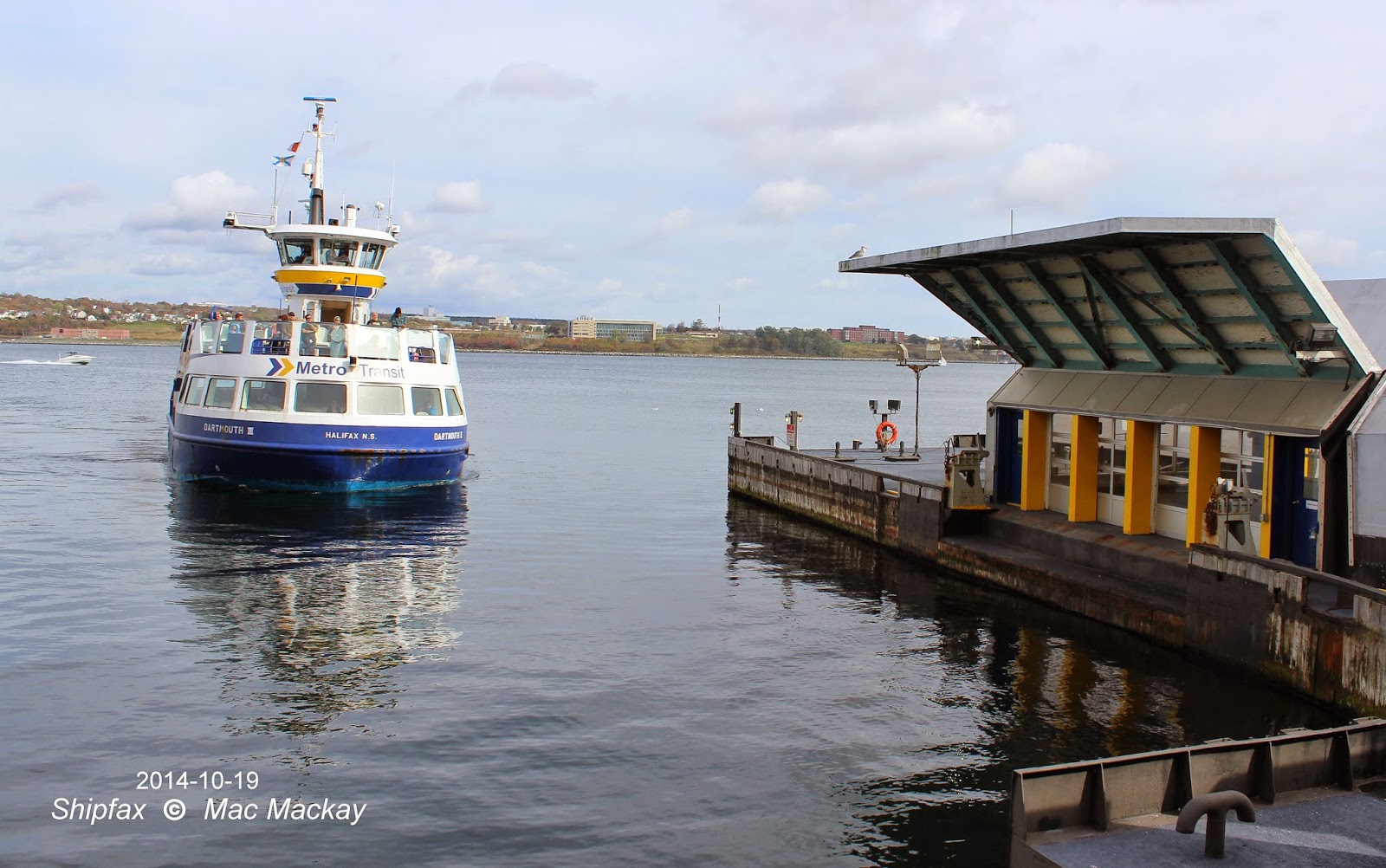 Dartmouth III approaches Halifax stern first. The boat's port of registration is shown as "Halifax, NS."
The eyebrow over the loading gates has since been removed, because in certain conditions the wheelhouse could strike the structure. The wheelhouse offset allows the operator to see the landing area.