Several small work boats ply the waters of Halifax Harbour on a daily basis.One operator of these boats is the Port itself. Since 1999 the operating organization has been called the Halifax Port Authority, a federal crown corporation. From 1984 to 1999, it was the Halifax Port Corporation and before that, from 1936, the National Harbours Board. Also a crown corporation the N.H.B. operated eighteen Canadian ports reporting to parliament through the Minister of Transport. (It ceded control of shipping in Halifax to the Royal Canadian Navy from 1939 to November 7, 1945.)
Transport Canada still oversees the Canada Ports Corporation (a.k.a. Ports Canada) which deals with overall transportation objectives, but leaves day to day responsibility for the individual ports to the local Authorities.

From 1963 the National Harbours Board in Halifax operated the workboat N.H.B. Patrol No.3. It was built in Hackett's Cove, NS, in nearby St.Margret's Bay and arrived in Halifax in tow of N.H.B. Patrol No. 2  (built in 1952 in Dayspring, NS) on November 21. Perhaps surprisingly its arrival was front page news in the Halifax Mail Star on November 22, finding space along side coverage of the assassination of John F. Kennedy. 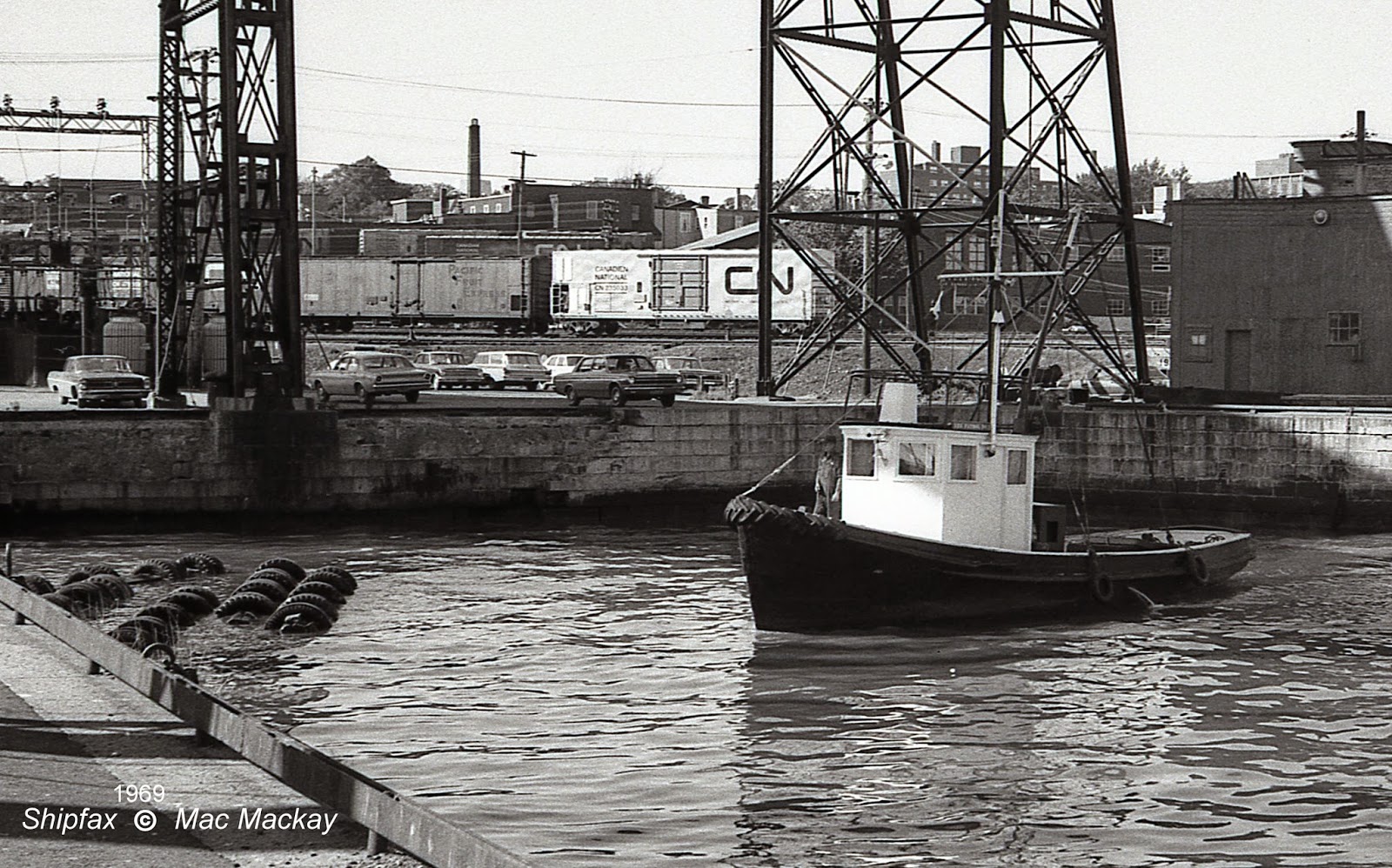 The boat was launched on November 20 and hoisted out at pier 3 in Halifax for installation of a 65 bhp engine. The boat's duties included handling the N.H.B's 80 ton floating crane. That crane was removed from service in the mid-1960s. 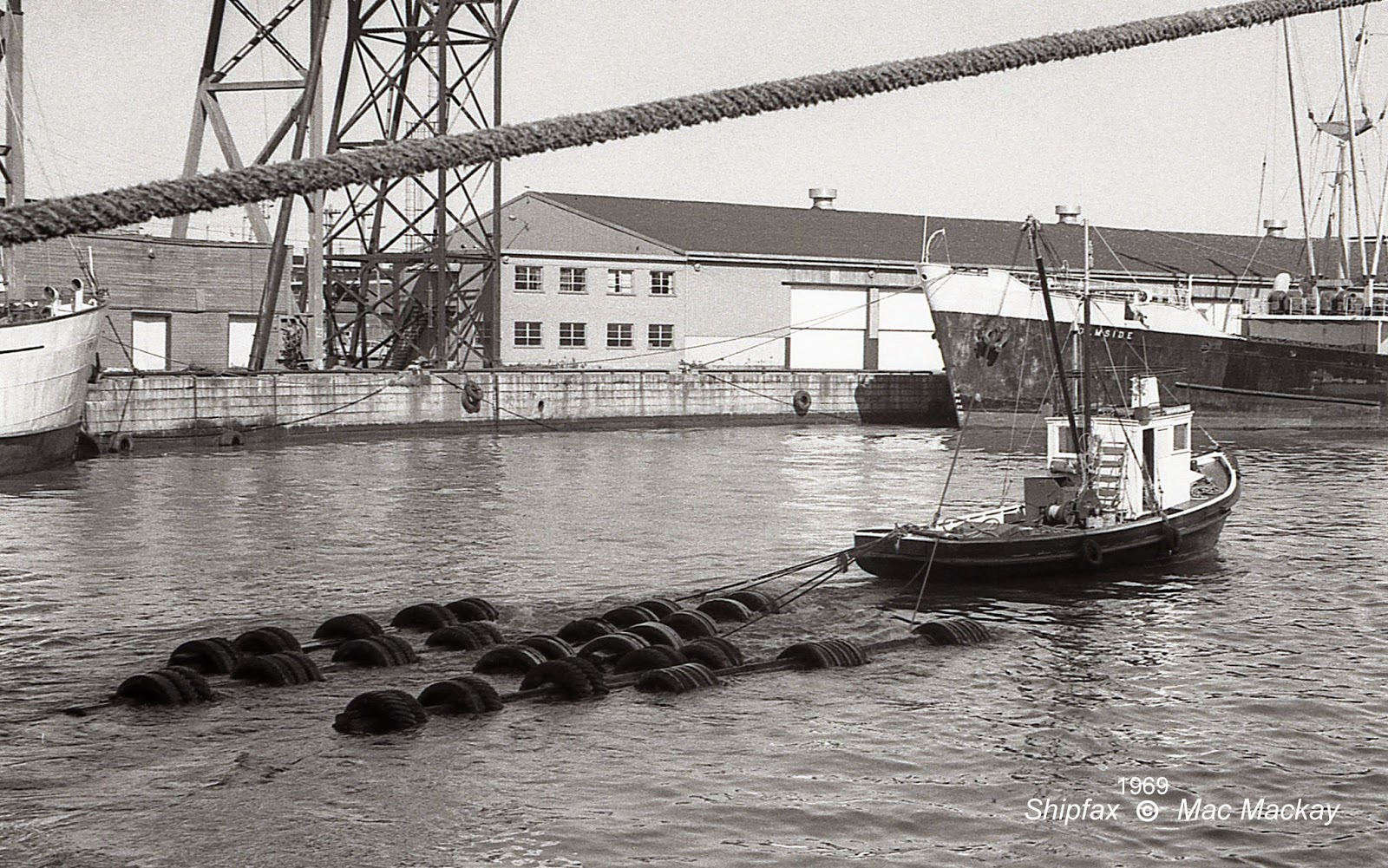 Fenders in tow, the boat sets out to install them at a pier.

Its main duty was work on pier fenders, which in those days were built of timber, and reinforced with heavy truck tires. The fenders were built by port staff at pier 25 and towed to their positions. They were constantly in need of maintenance and replacement, as were their securing chains. Another chore was to pick up deadheads, snags and debris in the harbour, and to remove washed up objects from the shorelines. 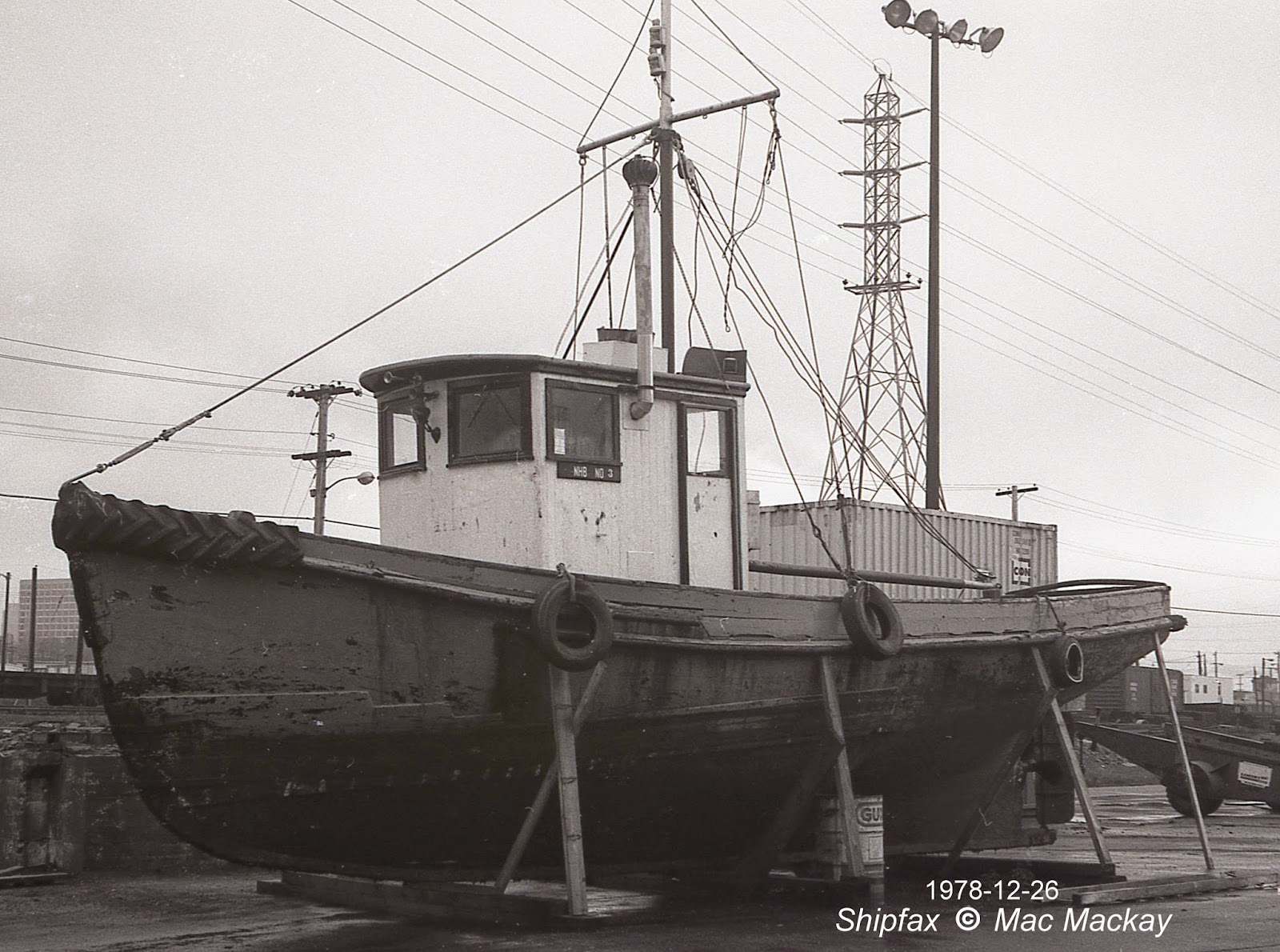 After sinking, the boat was moved to pier 24 where it was taken out of the water.

During the night of December 2-3, 1978 the boat sank at her berth at pier 7. After refloating it was taken to pier 24 and lifted up for clean-up. A replacement boat was due in two weeks anyway. The report at the time was that it was to be renamed Workboat No.101, but this was never done, and I believe it was scrapped.

PORT AUTHORITY
The replacement was called Port Authority. (A strange name, since the Halifax Port Authority was not formed until 1999). It was built in 1978 in DeBaies Cove, on the eastern shore, on the lines of a Cape Island type fishing boat, but was equipped with a derrick for handling the fenders and other work. 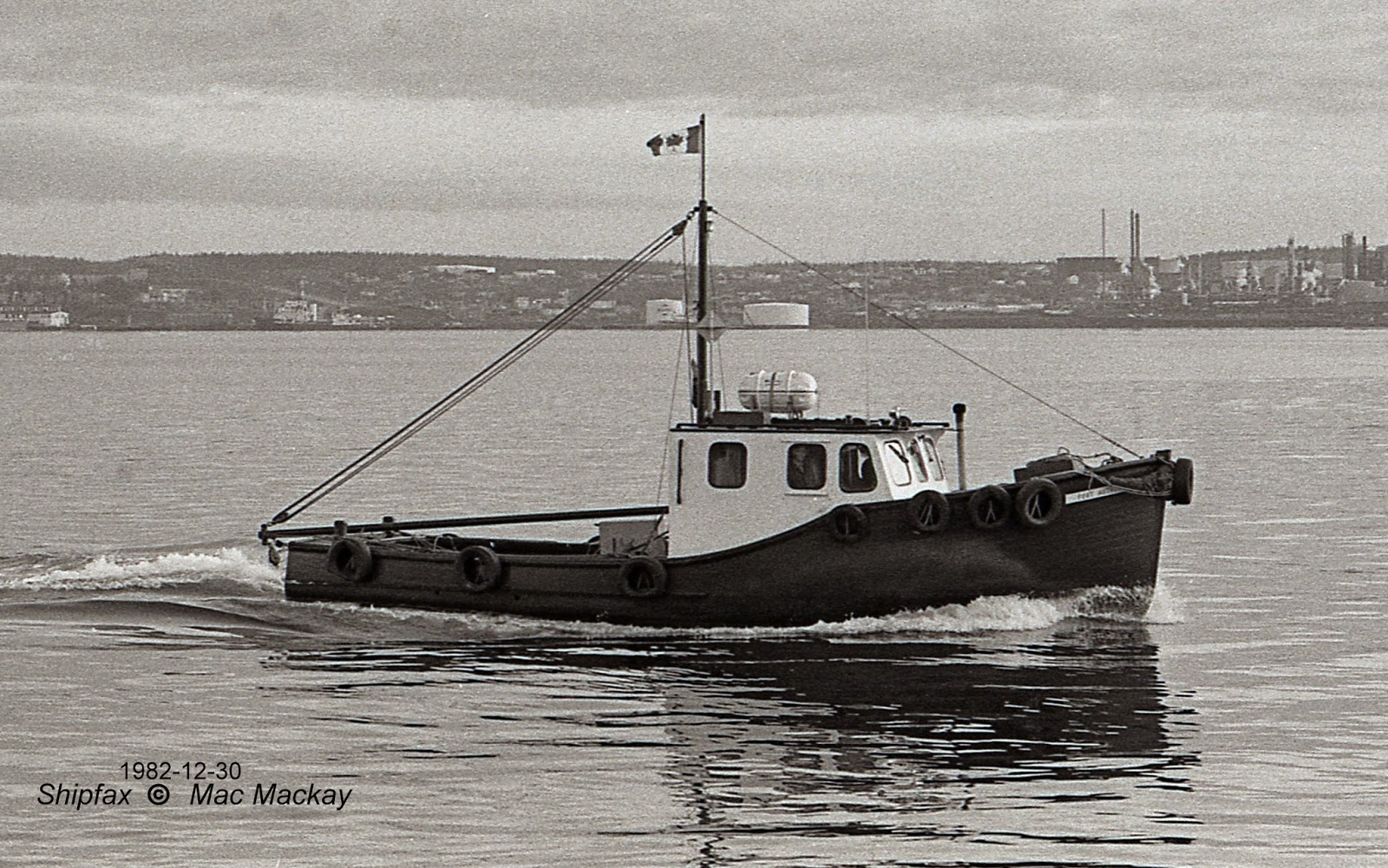 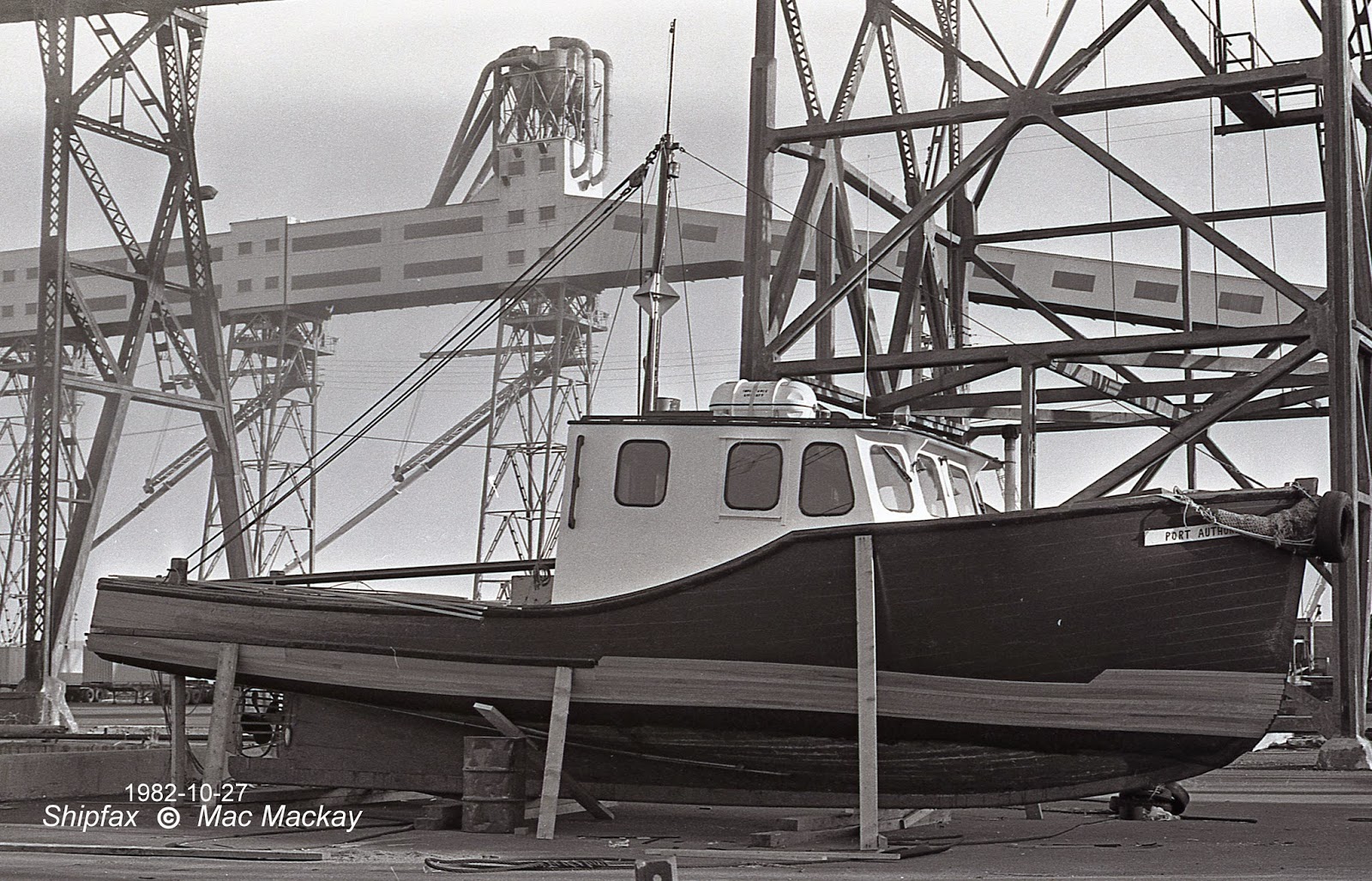 Out of the water for annual refit at pier 24, the boat gets new hull sheathing, not so much to protect it from ice, but also from contact with many of the floating objects it would sometimes have to recover. 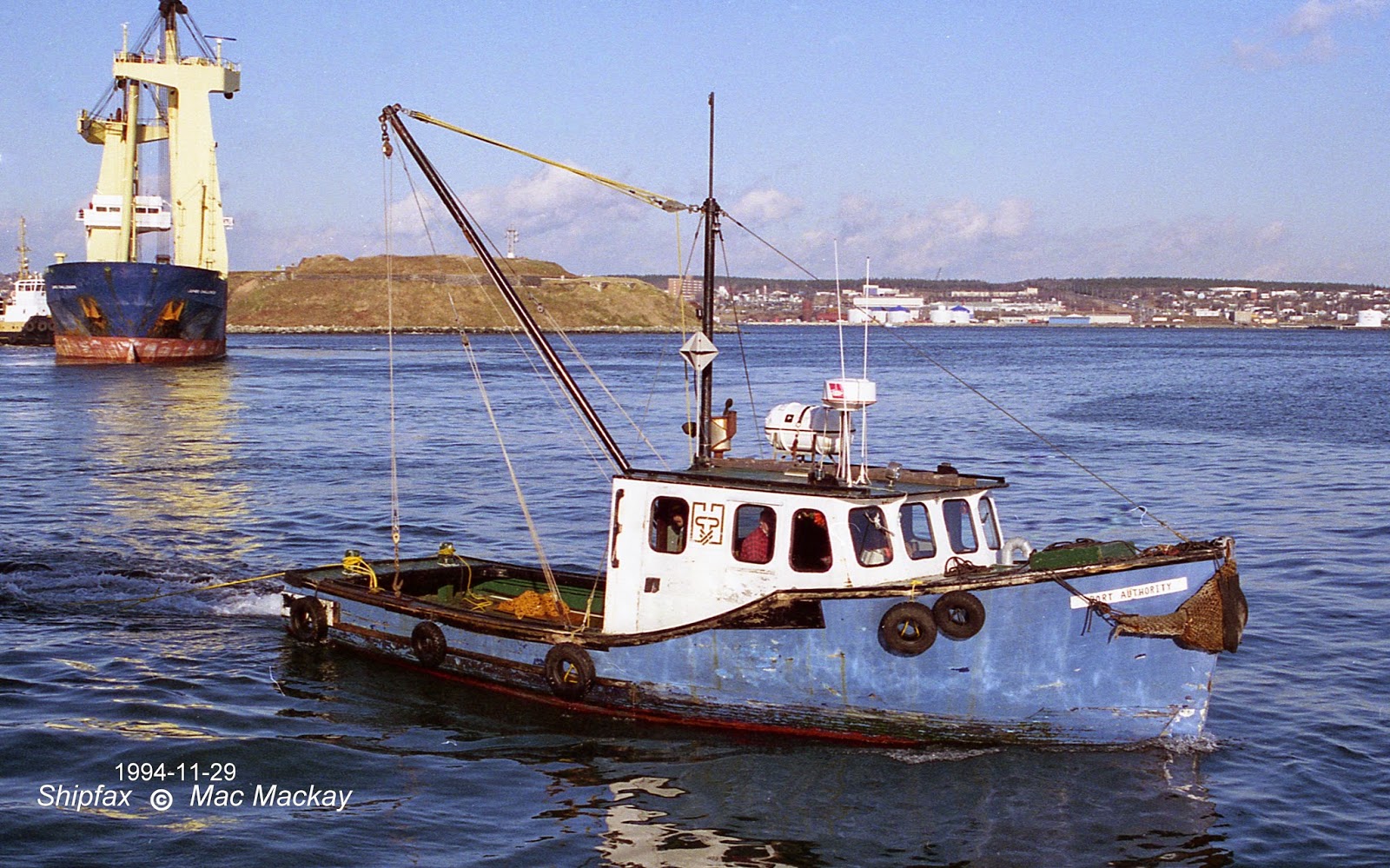 Port Authority's derrick is no match for the two 500 tonne derricks of Jumbo Challenger in the background, but quite sufficient for the work in the harbour.

To my knowledge, it suffered no mishaps during its career, and worked streadily until its replacement arrived in 1995.

MAINTAINER I
The first steel hulled workboat for the port, Maintainer I was built by A.F.Theriault + Sons Ltd of Meteghan River, NS, in 1992. 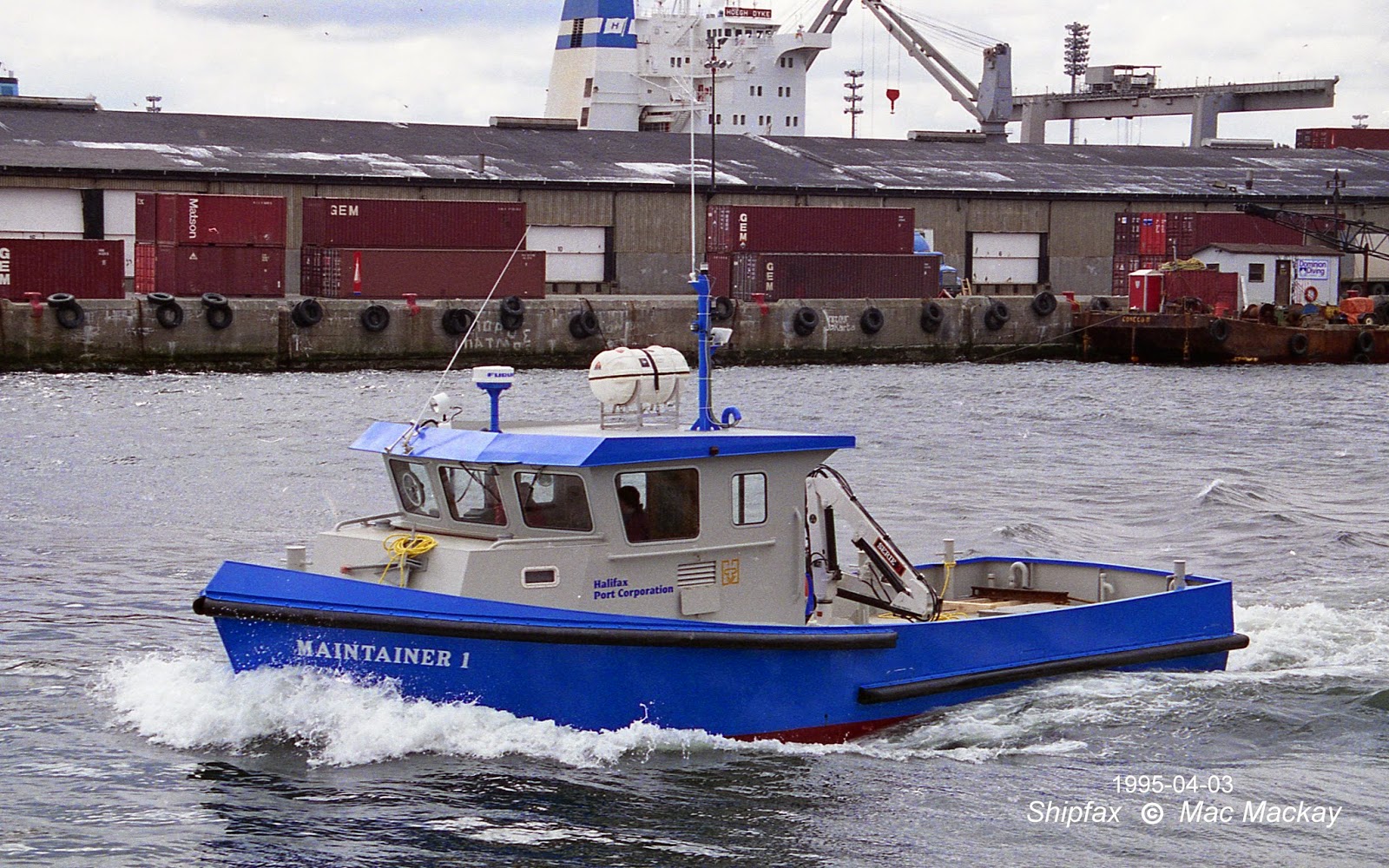 Maintainer I heads for the harbour from the camber of pier 30. Instead of a derrick, the boat carries a hydraulic knuckle boom crane. 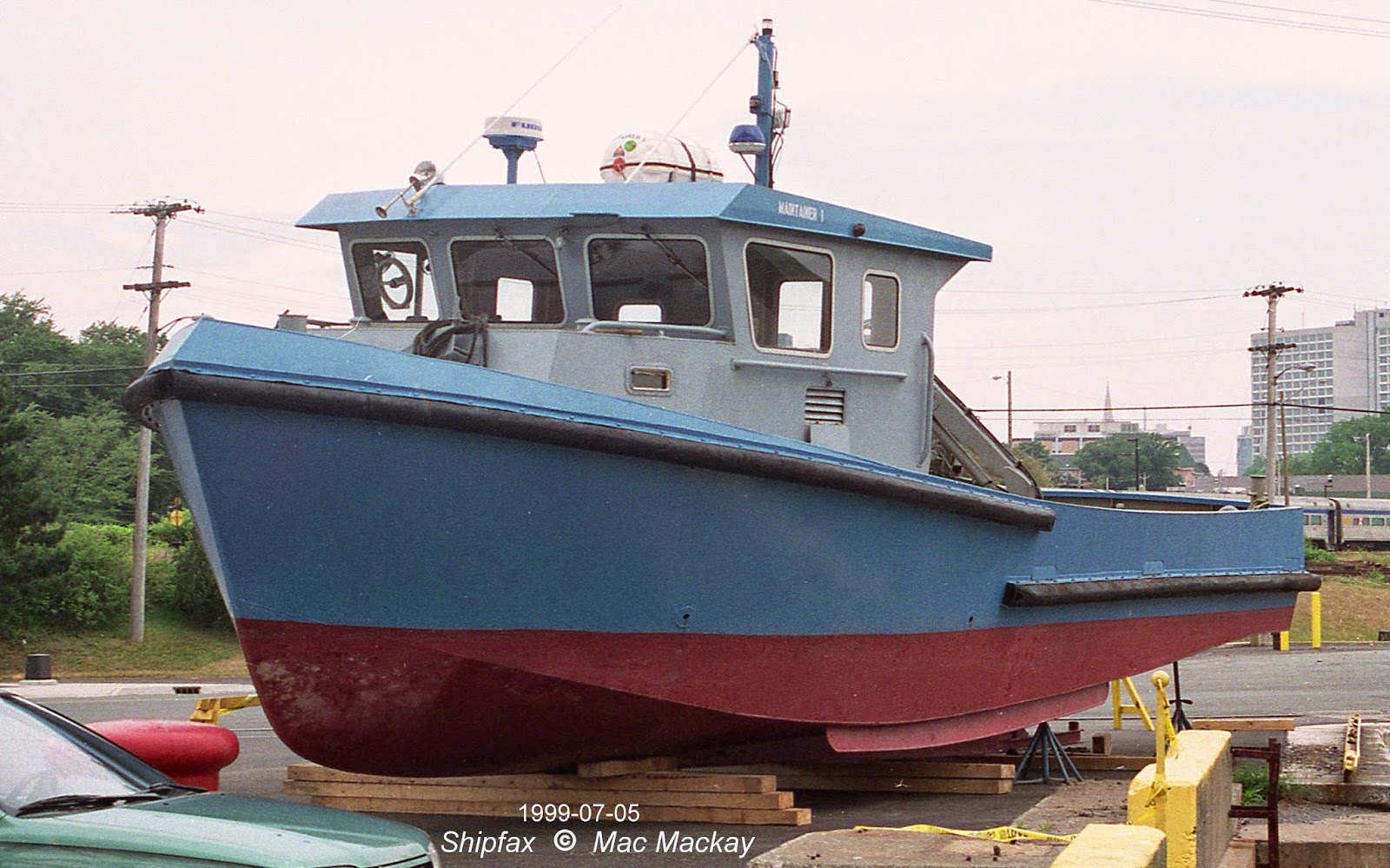 The boat is almost flat bottomed, and has bilge keels to minimize rolling. 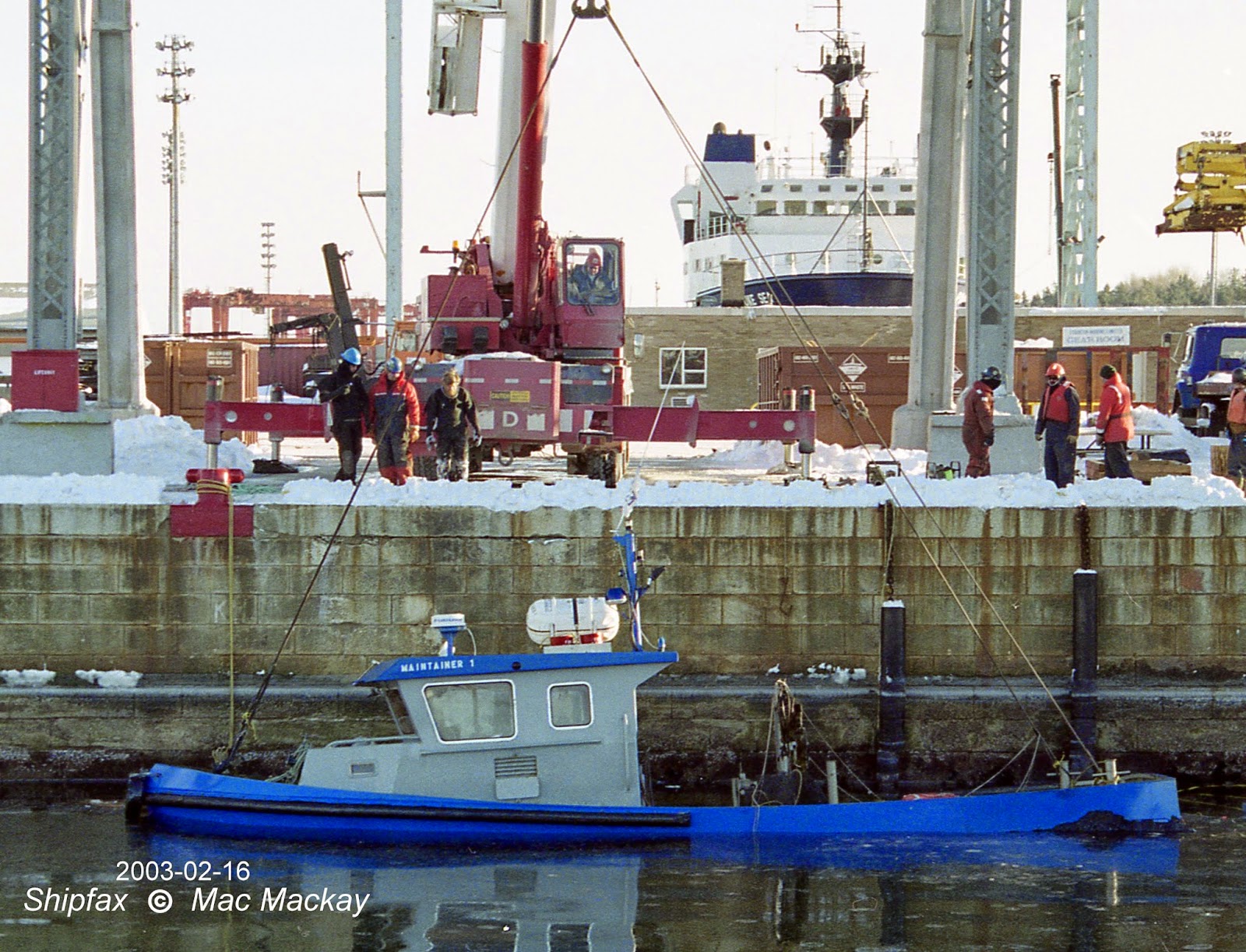 Embarassing moment, after which the boat is drylanded for repair.

On February 16, 2003 the boat sank suddenly at its berth at pier 25. Cold weather resulted in a frozen pipe, which burst and flooded the hull. The boat was lifted out by crane and sent to the Brenton Gray boatyard in Sambro, NS where it was repaired and modified. One of the changes was to relocate the waterline exhaust system to a conventional vertical stack. 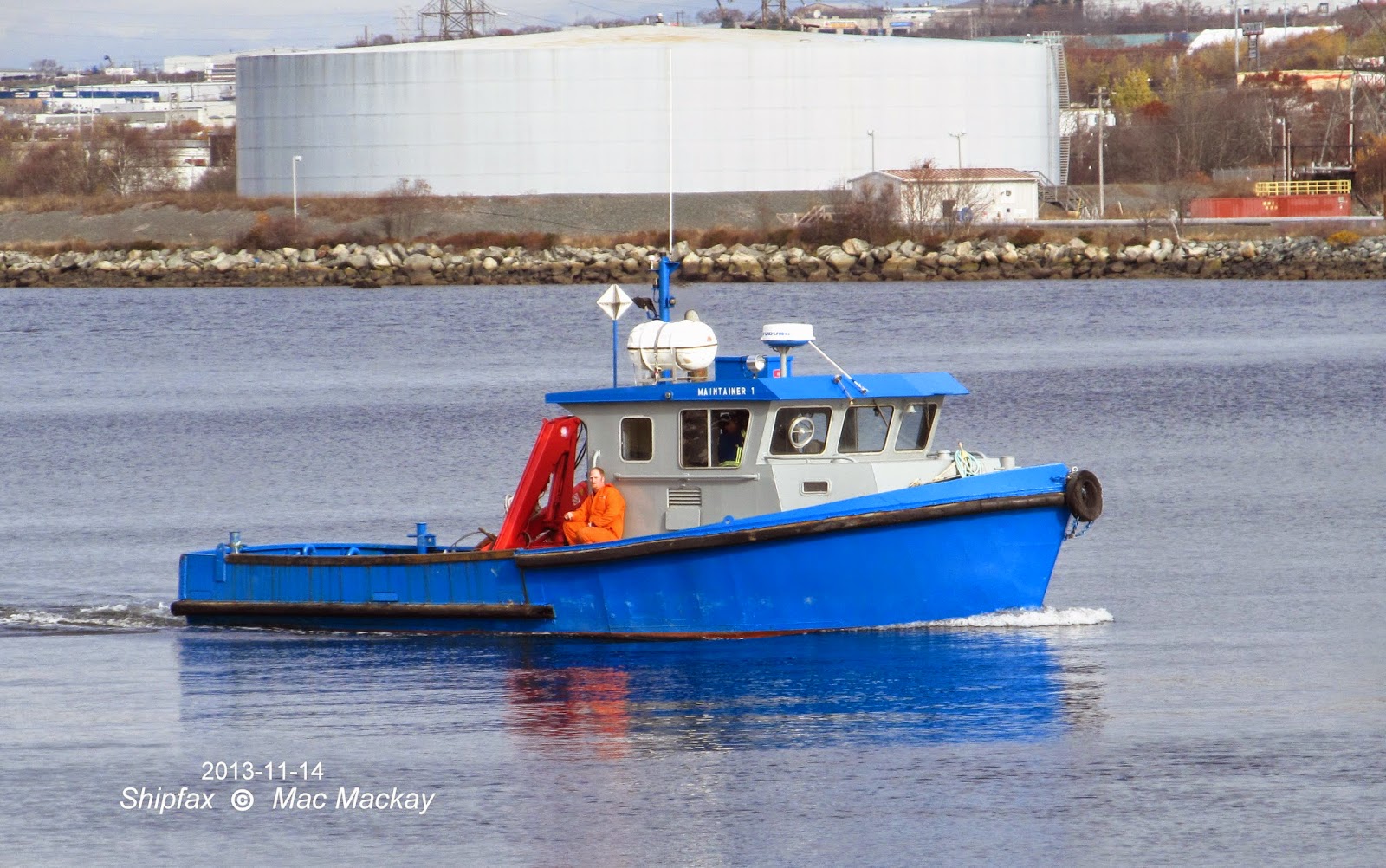 This is the boat that is still in service today.