The most enduring ship to carry the name Halifax will almost certainly be the current HMCS Halifax, lead ship of the Royal Canadian Navy's Canadian Patrol Frigates. It is not the first naval ship to carry the name however.
The first pre-dates Canada's confederation, and was HMS Halifax, a schooner built in 1768. It commemorated Halifax, which was founded in 1749 by Edward Cornwallis, as a naval base and a town. Its strategic importance as Warden of the North was certainly worthy as the namesake of a naval vessel. [Incidentally Halifax was named for George Montagu-Dunk, 2nd Earl of Halifax, president of the British Board  of Trade at the time of the founding. We are forever grateful that the city was named for the peer's Werst Yorkshire territory, not his family name.]

See an excellent history of the first HMS Halifax
http://en.wikipedia.org/wiki/HMS_Halifax_%281768%29
and a great video of the Maritime Museum of the Atlantic's model:
https://www.youtube.com/watch?v=wpSDgGOTtgg

Four subsequent RN ships carried the name Halifax, between 1775 and 1814. Among them the forner USS Ranger , an 18 gun sloop captured in 1780 and sold in 1781 and another 18 gun sloop built in Halifax in 1806 and broken up in 1814. The rest were purchased schooners that only operated a year or two.


During World War II the Royal Canadian Navy was built up from an insignificant blip on the world  naval stage to a major armada, most of which was built in Canada since the other allies were busy building up their own navies.
The problem of naming these ships, so as not to cause confusion with ships of other nations was generally resolved by selecting Canadian cities as namesakes. Some slight variations were needed, such as Norsyd (for North Sydney) and Thorlock (for Thorold  and the Welland Canal's flight  locks) but generally the city's name was used, and as a byproduct created good will in those communities, even if far removed from the sea.

The most prolific ship in the Canadian Navy was the corvette, and after exhausting Flower names, as the RN had used, the ranks of Canadian towns and cities were added to the list. That the name of Halifax should be used alongside some very small and militarily unimportant towns may have been deliberate. A lot of time was taken to try to conceal Halifax's naval importance, often not naming it in news reports. Instead the reference was usually "an eastern Canadian port" - a title it shared with Sydney, NS and even Saint John, NB and Shelburne, NS which had important naval and convoy roles.

Therefore the first HMCS Halifax was a lowly corvette, built by Collingwood Shipyards in 1941 and paid off in 1945.It was a member of the Revised Flower class and was the first ship delivered with the extended forecastle, which improved seakeeping and increased accommodation space. Halifax worked as a convoy escort in the Caribbean and the Atlantic.Her pennant number was K327 and there are several images of her online.

Although she paid off in Sorel, July 12, 1945, her fate was not the scrappers torch. Instead she was laid up in Sydney, NS. There is a report that she was the first ship sold by War Assets Corp following the end of hostilities. It has also been reported that she was converted to a salvage vessel. This did not happen.
Instead she went to Thompson Bros Machinery Co Ltd in Liverpool, NS (owned by K.C.Irving) where she was hastily converted to a cargo vessel. Retaining her steam plant, she received cargo holds fore and aft and a crew deckhouse on her after deck.Relatively fast ships were needed in the Caribbean for short hauls of nearly ripe produce, where sophisticated refrigeration was not needed. Banana Shipping Service Ltd of Houston, TX placed the ship under the Honduran flag, but in 1950 sold it to Transportes Maritimos y Refrigerado SA of Villa Hermosa, Mexico. The ship flew the Mexican flag for the next five years and continued working in the Gulf of Mexico. The last reliable report of her was in 1955. After that the story gets murky, and her name was finally dropped from Lloyd's in 1963.

There was then a long gap before the navy selected Halifax as a namesake again. That came in the  1980s as the RCN entered another building program. Halifax was chosen as the name of the new class of multi-purpose ships, to be called Canadian Patrol Frigates. Accordingly the lead ship was laid down  at Saint John Dry Dock and Shipbuilding March 19, 1987, launched April 30, 1988 and handed over to the RCN June 28, 1991.

The future HMCS Halifax conducted builder's trials in Halifax in October and November 1990, but returned to Saint John for handover.


On June 29, 1992 it was formally commissioned into the RCN as HMCS Halifax.By the autumn of 1993 it was prepared for duty and in April 1994 sailed to the Adriatic Sea for NATO. Since then it has conducted the usual sovereignty patrols and participated in NATO and other exercises.
It also relieved HMCS Preserver as command and control centre during Operation Persistence, the recovery of Swissair flight 111 in St.Margaret's Bay (1998) and Operaton Hestia- the relief operations following the Haiti earthquake in 2010, where it, among other duties, was the aviation control centre for flights in and out of the Jacmel area.

On September 4, 2010 it began its mid-life refit at Halifax Shipyard under the Frigate Life Extension program. It returned to HMC Dockyard June 16, 2012 and made its first sea trial November 21, 2013. 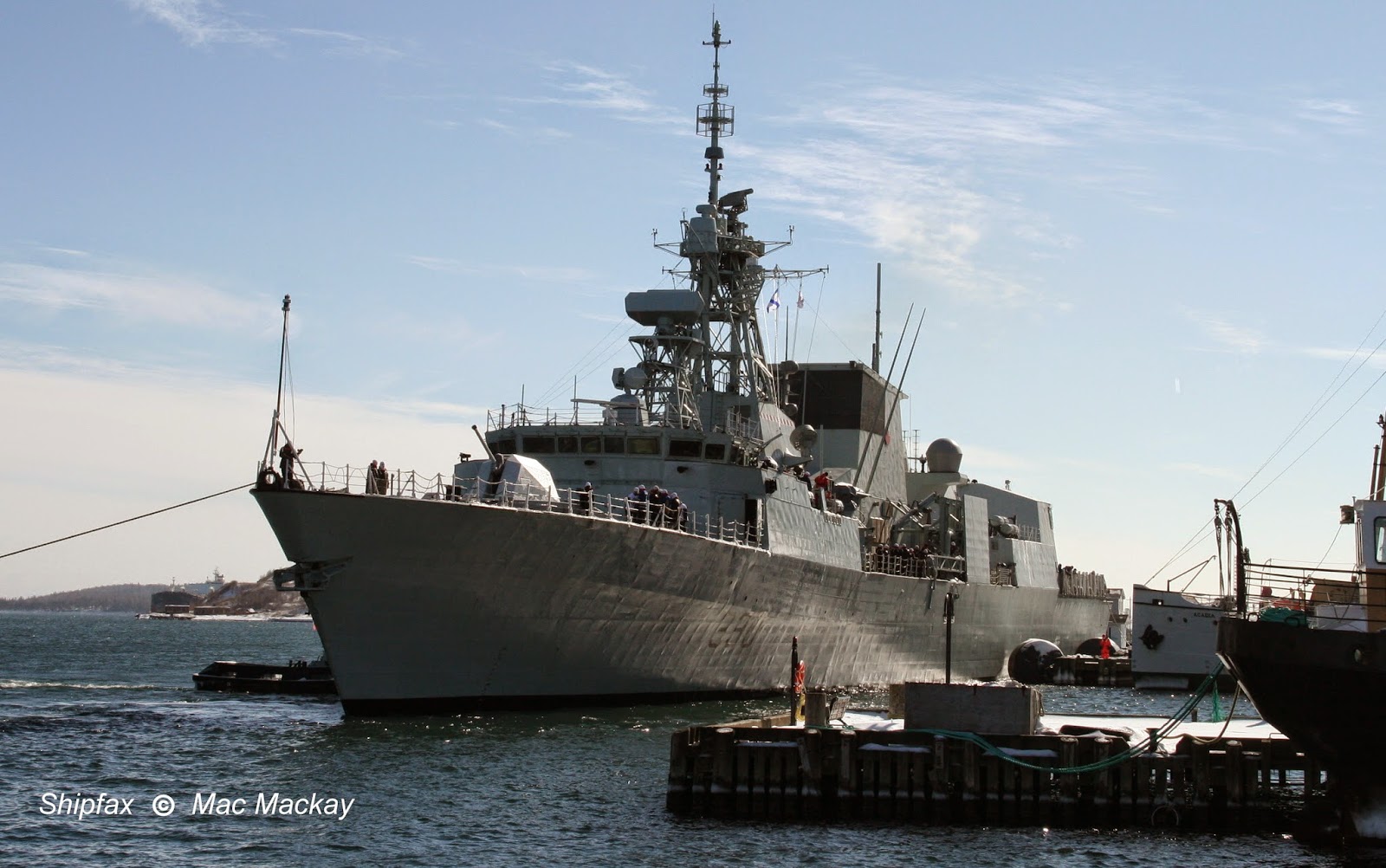 The post-FELEX Halifax went alongside at the Maritime Museum of the Atlantic this morning, but later moved back out into the harbour. While at anchor one of the new helicopters landed on its afterdeck.

Now what happens (he asked).

The Canadian Patrol Frigates were originally designed for a 30 year hull life and a 15 year equipment life. The latter has been dealt with, and the former seemed inevitably to lead to a year 2022 decommissioning for HMCS Halifax.

The Canadian government's National Ship Procurement Strategy had indicated that a Single Class Surface Combatant Project (SCSCP) would replace the Halifax class frigates and the Iroquois class destroyers  between 2018 and 2033. However the destroyers will be withdrawn from service well before the first of those ships sees the light of day. Upgrading the Halifax ships to destroyer status seems unlikely, since they are too small to start with, but there may be a stopgap temporary solution coming.

It seems that another upgrade may be on the horizon. Starting in 2017 or 2018, and extending beyond 2030, it will see at least some of the Halifax class, or possibly only the last six ships in the series (also known as the Montreal class) getting another life extension, consisting only of systems upgrades (such as new under water detection, unmanned aircraft, defensive missiles, etc.,)
These improvements would extend the frigates lives from 2017 to perhaps 2030 or beyond..
This would seem to me that some of the first of the new SCSCPs will be built as destroyers, with replacement frigates nearer the end of the program.This is purely speculation on my part, but as I have said before the RCN without supply ships and without destroyers is really only half a navy.

In any event there will still be Halifax class frigates for some time to come and HMCS Halifax will be with us for at least another ten to fifteen years.