There have been a few ships with the name Halifax (including two HMCS Halifaxes) but most ships have used Halifax in conjunction with their usual naming formula. Thus the City Line, County Line, Port Line and others each had a Halifax in their fleets.

At least three modern day lines have also used Halifax as part of ship's name, among them Melfi Lines. Trading to and from Cuba, Halifax has been a port of call since October 1992 (with a brief hiatus in 2009). The line has used chartered ships exclusively, many never changing their names for short term service with Melfi. However at one time they did have longer term charters and several ships adopted Melfi as the lead name, and two of them were named Melfi Halifax.

Melfi Marine Corp was founded in 1981, registered in Panama, but is controlled by the Cuban government. Melbridge Container Line, based in the Netherlands, is also controlled by Cuba and is operated independently. Another line, Coral Container Lines, also owned by Cuba, was absorbed into Melfi. It was the successor to the state owned Empresa de Navigacion Mambisa.

The first Melfi Halifax only carried the name for a year. Built as Arktis Mariner in 1996 by Aarhus Flyedok in Denmark, it took the name Melbridge Major from 1996 to 1997 before becoming Melfi Halifax It only made a few calls in Halifax before it reverted to Arktis Mariner in 1998. It has since carried the names 00: P+O Nedlloyd Belem, 00: CEC Mariner, 02: Seaboard Explorer II, 09: Clipper Mariner, 13: Shaya. It now flies the Panamanian flag for Okyanus Ege Denicilik Ticaret of Istanbul. It measured 6285 grt, 8972 dwt, carried 650 TEU and had two 70 tonne cranes. 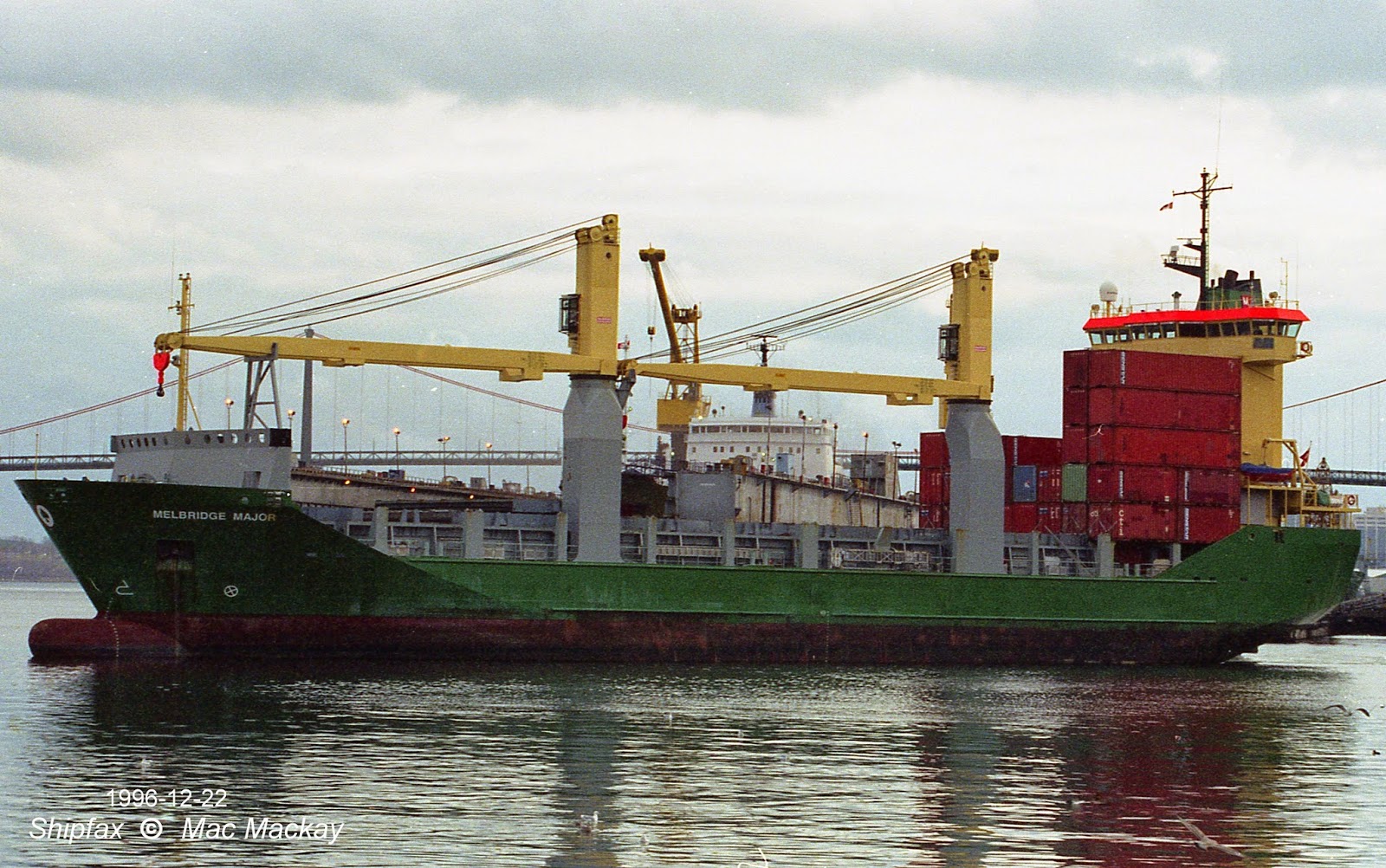 Melbridge Major exits the Scotiadock floating drydock after a one day pre-charter survey. One of three sister ships chartered by Melfi late in 1996, it was hurried into service before having its name changed to Melfi Halifax. Sister Melbridge Main was towed into Halifax with a damaged rudder and required drydocking and would be delayed, so Melbridge Major moved ahead in the roster. Melbridge Main became Melfi Azteca and Arktis Mayflower became Melfi Venezuela.

The second Melfi Halifax adopted the name in 2004. It was launched in 1999 by Stoc. Gdanska in Poland as Armin, but was delivered as Jork Vernture. In 2002 it became MSC Ireland. The ship measured 14,241 grt, 18, 425 dwt, had a capacity of 1129 TEU and had two 43 tonne cranes. When it completed it Melfi charter in 2008 it was renamed Stadt Schwerin and on January 1, 2015 it was renamed Kosova under Panamanian flag for Ak Gemi Tasimaciligi Samayi re Ticaret of Istanbul. 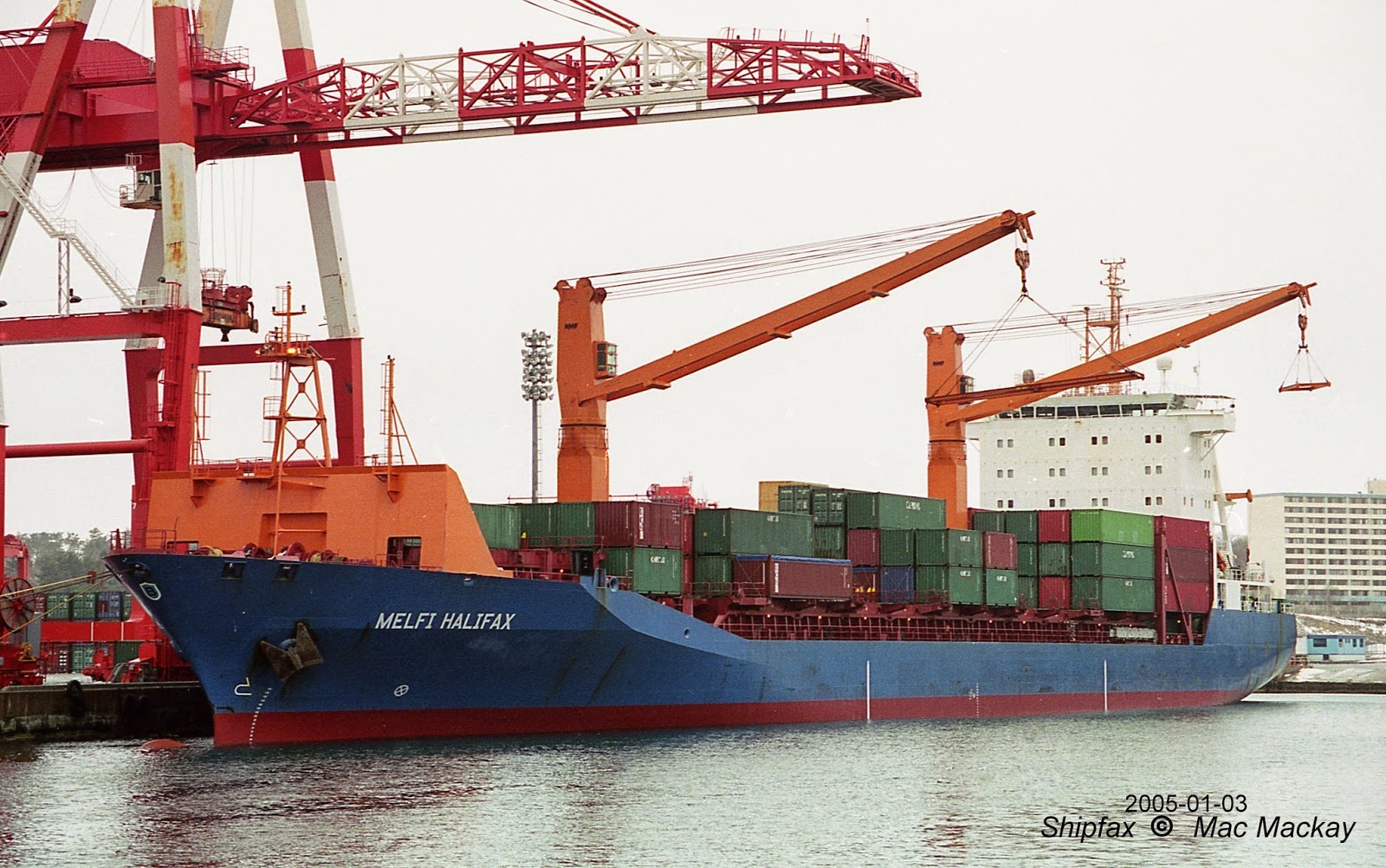 Melfi Halifax (ii) at pier 36. Its cranes are swung out to allow the shore crane to access the cargo.