In the days of wooden ships, Nova Scotia had a justifiable reputation for building fine big schooners. Best known are the two master fishing schooners, but there were also scores of trading schooners, often three masted (called terns) that carried freight up and down the east coast to the US and Caribbean. Many fishing schooners did double duty in this trade too when not fishing or were permanently converted to freighters - the original Bluenose was an example.

During prohibition Nova Scotia also built countless small fast motor freighters, also of wood, but these were not very efficient in terms of cargo capacity or economy of operation once prohibition ended, and so Nova Scotia builders turned to larger cargo carriers.
These large wooden freighter measured about 150 ft in length, and 400 grt or so. They had engines roughly amidships and had holds fore and aft. They carried every kind of freight, lumber, coal and salt, and many were fitted out for winter work in the Caribbean to carry fruit. Speed was important in that trade, so their hull forms owned much to their schooner predecessors.

A typical ship of this type was Lady Cecil, built by Smith+Rhuland in Lunenburg in 1947-48. However she did not have a typical career. Intended for the salt fish trade from Quebec to the Caribbean and return with bulk salt, she was built for the Quebec owner Raoul Castonguay of Matane. Her engine, an 8 cylinder Fairbanks Morse, was delivered six months late and so she missed her first season of trading from the St.Lawrence River before freeze up. Instead she was fitted out for sealing, and her hull was sheathed in greenheart to help withstand the ice.

She was chartered to St.Lawrence Sea Products Co and sailed for the seal hunt from Halifax, March 9, 1949 with Capt. Stanley Barbour as sealing captain. There were 32 Newfoundland sealers and 10 crew from Quebec, with Capt. Castonguay as master. She was soon trapped in ice off the Magdalen Islands and had to be freed by the government icebreaker CGS Saurel, without any damage. I don't know how she made out in the hunt, but her owner was soon forced to declare bankruptcy. In the hearing it was revealed that the ship's original cost was $149,300. $87,000 of which was for construction the balance for accessories. (presumably mostly engine). 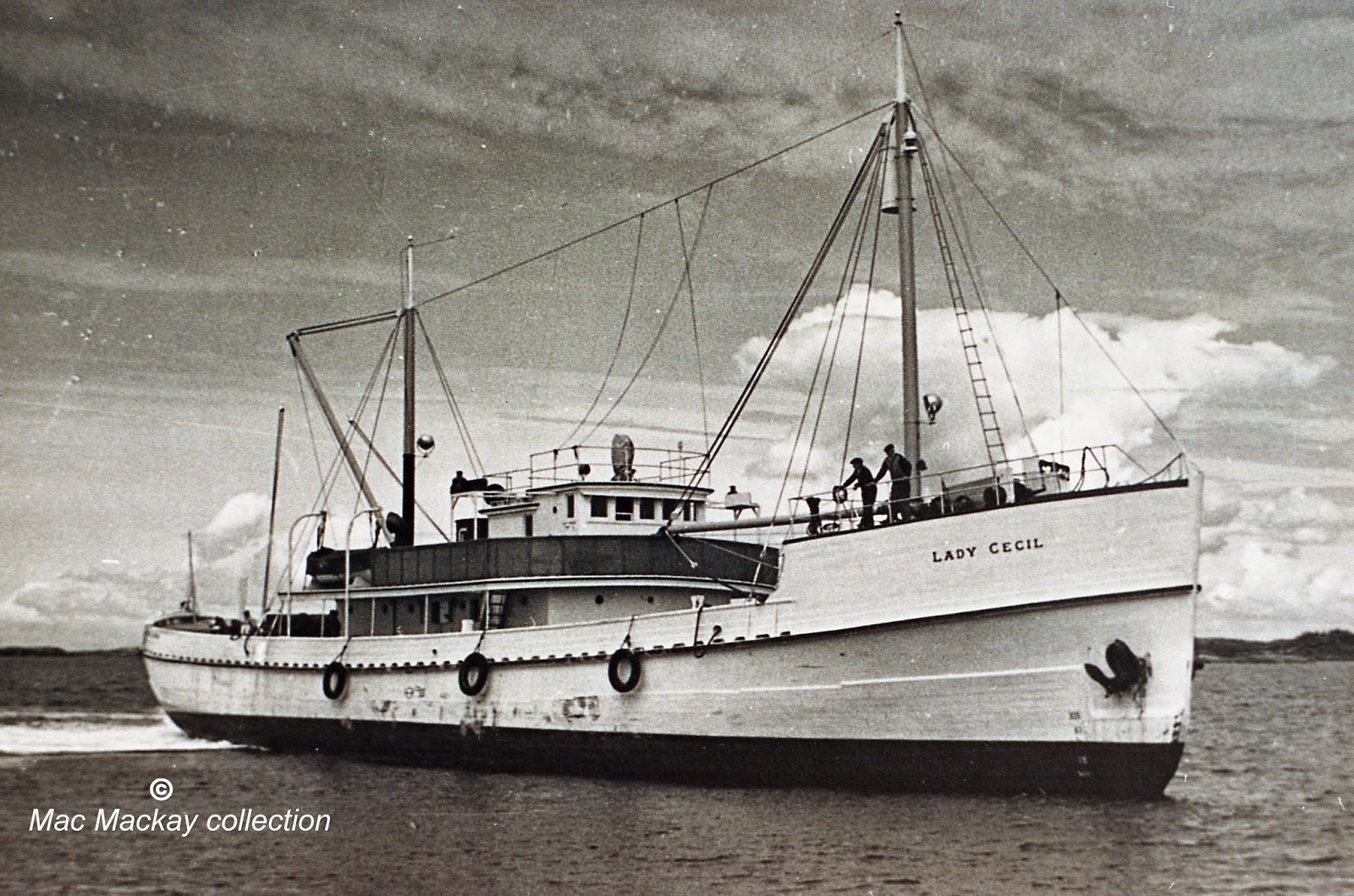 Lady Cecil was typical of the big wooden coastal freighters built in Nova Scotia.The greenheart sheathing on her hull is quite visible in this photo.


The receivers, Boulet et Boulet operated the ship for a time and sold it to St.Charles Transportation  of Quebec. In the mid 1950s it was bought  by the legendary Capt. Borromée Verreault of Méchins, QC, founder of Verreault Navigation and the current large shipyard in Méchins as well as the now defunct dredging operation. Renamed Claudette V. she traveled widely. In October 1956 on a trip to Fort Chimo with av.gas in barrels, she lost power and her anchors and was taken in tow by USS Fort Mandan off Point Amour, Labrador. She handed the tow over to CGS Labrador for the last 30 miles into Corner Brook .

In 1958 the ship made several trips from Montreal to Port Cartier, Sept-Iles and Newfoundland with creosoted timber.
In bad weather off Cape Ray in June 11, 1959 the captain was forced to jettison the deck cargo of creosoted timbers bound for St.Bride, NL and ordered the crew to abandon ship. The coaster Fauvette saved the crew and the trawler Zebroid took the ship in tow off St-Pierre.
The trawler's owners, Fisheries Products Ltd won a salvage award of $55,923 for the vessel and equipment ($42,500) and cargo ($13,432). The award was to be shared 50% by the company and 50% by the trawler crew.

Subsequent lawsuits and appeals lasted until 1971. The court's eventual finding was that there was an inherent weakness in the ship's construction that was worsened by a grounding at the beginning of the voyage. (Dominion Law Reports 1971 17 (3d) p.56).
The ship survived all this, but was laid up and finally broken up in Méchins in 1975.


Velvet Lady  was launched by Smith + Rhuland October 6, 1946. Sponsor was Miss Reba Onigman of Reba Fisheries in Boston.  She was the US representative of W.Laurence Sweeney, the owner and proprietor of Sweeney's Fisheries of Yarmouth, NS and a major shipowner. (He later owned a dragger called Miss Reba O.)
Sweeney had his own shipyard in Yarmouth and had also built several big coasters there during World War II when ship were in short supply.
The ship measured 369 grt and was about 150 ft long. Lunenburg Foundry installed the 400 bhp Atlas engine. 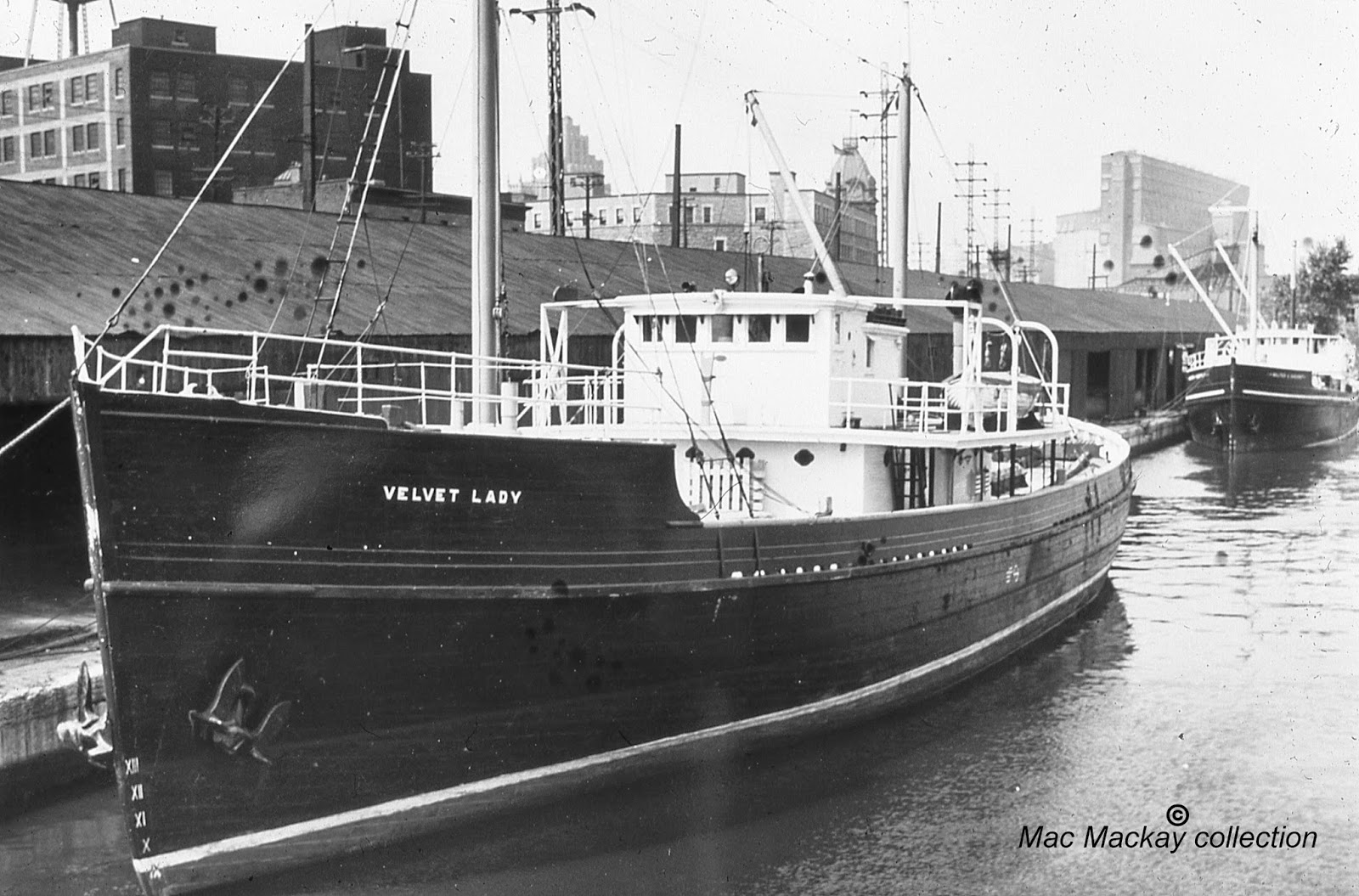 Velvet Lady's fine lines are apparent in this photo take in Montreal.

It entered the Caribbean trade and on March 1, 1949 it was towed into Yarmouth by the Fisheries Products Ltd freighter Zebrula after drifting for four days off Seal Island. It was carrying 490 tons of salt from Inagua on a return trip from Venezuela.
The ship was sold later to Gulf Maritime Shipping Ltd of Matane and after a grounding the Gulf of St.Lawrence was declared a total loss.

There were about thirty ships of this general type built in Nova Scotia from the late 1930s until about 1949. Some were built for the Hudson Bay Company, some for the military but most were for local shipping companies.  There was also one 'outlier' built at the vbvery end of the wooden shipbuilding era. More on that in part 2.
Posted by Mac at 10:39 PM