Gypsum - Part 2 - no rebound for Hantsport

The expansion of the National Gypsum quarry in Milford, NS (see Part 1) solidifies the future of gypsum shipments from the company's facilities in Halifax. A recovery of the US economy, and a low Canadian dollar are largely responsible for this turn of events, but that does not seem to have had any effect on their competitor United States Gypsum, or USG Corp as it is now called.

That company shut down its mines near Windsor, NS and storage and shiploader in Hantsport, NS permanently in 2011 and although much of the infrastructure remains, there is little hope that it will reopen. The short line Windsor + Hantsport railroad that carried the gypsum from the mines to the pier has also been mothballed.

The fascinating little port of Hantsport, governed by extreme tides, was one of the most interesting operations in Nova Scotia. Ships were limited to only a three hour window for loading at high tide, and had to beat a hasty retreat from the Minas Basin to the Bay of Fundy while there was still water enough to float the ship.

Winter operations were also awkward due to caked ice on the bottom at the pier, and heavy broken flows in the approaches. Some winters the port was closed to shipping, and through some form of cooperation between the competitors, the ships came to Halifax to load at National Gypsum. Through subsidiary Canada Gypsum (CGC) the company also operates a gypsum and anhydrite quarry at Little Narrows in Cape Breton. It is a seasonal operation from roughly May to December, when the port facility is free of ice. Ships that called in Little Narrows in summer moved to Hantsport in winter - conditions permitting.

Also early adopters of the self-unloader systems, the ships of the Gypsum Packet Co (later Gypsum Transportation Co) were built uniquely to serve Hantsport and the plant facilities of US Gypsum in the United States. They were built with the wheelhouse well forward to keep a clear deck space over the cargo hold for the slewing loader arm at Hansport. They did have a general cargo hold forward, which was used to carry plant equipment or other supplies for the company.

There were four generations of ships owned by the company following World War II.
The first generation were built in Kearney, NJ by the Federal Shipbuilding + Dry Dock Co and measured 7969 grt. 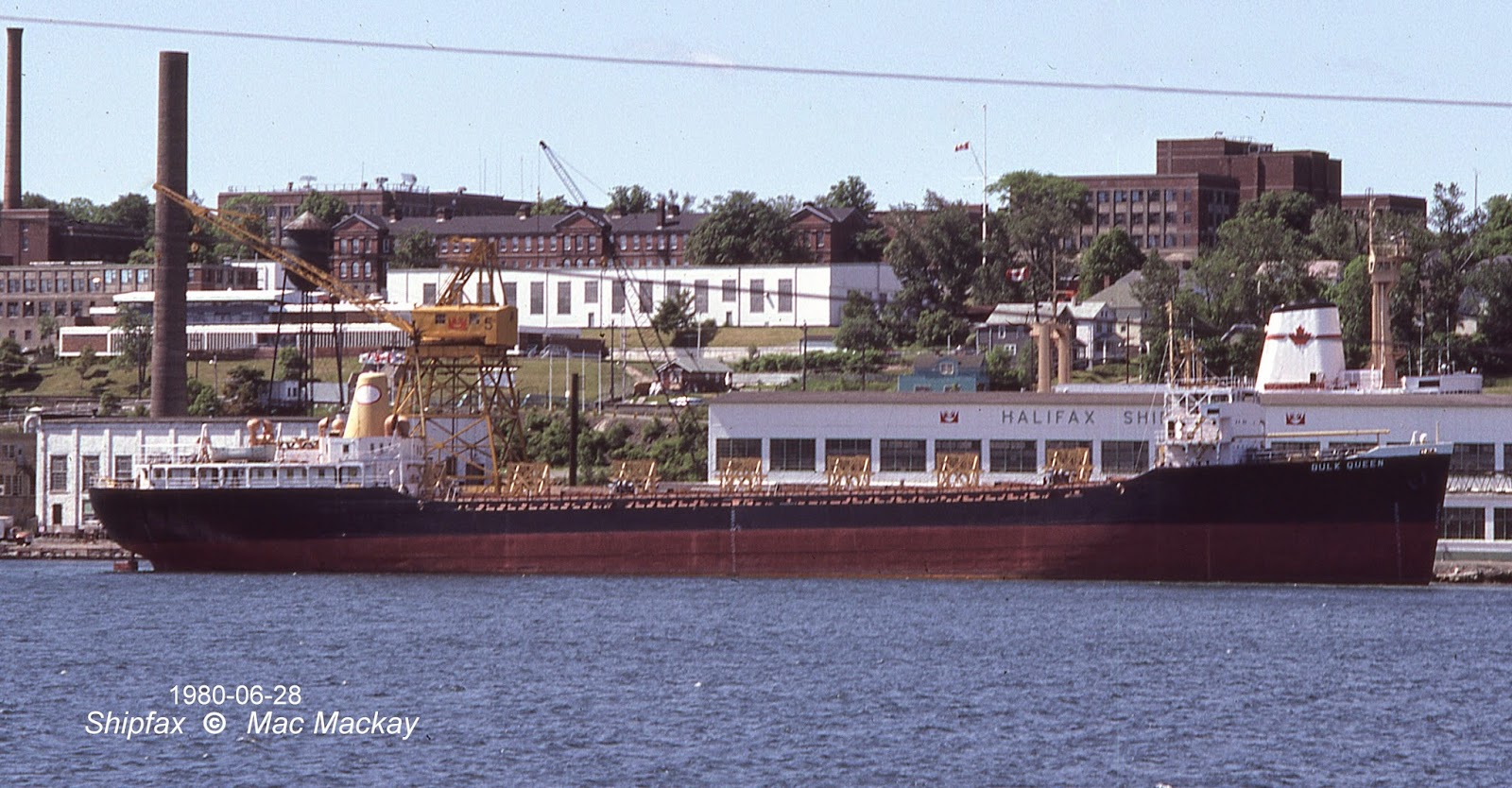 Bulk Queen at Halifax Shipyard in 1980.

Gypsum Queen was built in 1947 and sold in 1975, renamed Bulk Queen in 1978 and was used on and off until it went into a long layup in Bath, ME and was eventually towed out for scrap in the Caribbean in April 1987.

The second generation, and by far the most stylish were the European built series. Their self-unloading gear was completely concealed, with twin conveyors running up each side of the hull through the engine room to a transverse conveyor near the stern. Doors on each side closed off that "shuttle" conveyor space when at sea.The ship's steam turbine machinery allowed for placement of boilers fairly high in the engine space, and the turbine low, allowing the conveyors room to work.

Gypsum Duchess makes a winter arrival in Halifax to load from its competitor's dock.

Gypsum Duchess and sister Gypsum Emporess were built in 1956 by Deutsche Werft, Hamburg, measuring 8240 grt, 10,677 dwt Gypsum Duchess was sold in 1986 and renamed Duchess I, but was broken up in Brazil in 1987.

Gypsum Empress was sold directly to scrappers in Tuxpan, MX and arrived there in early 1984. 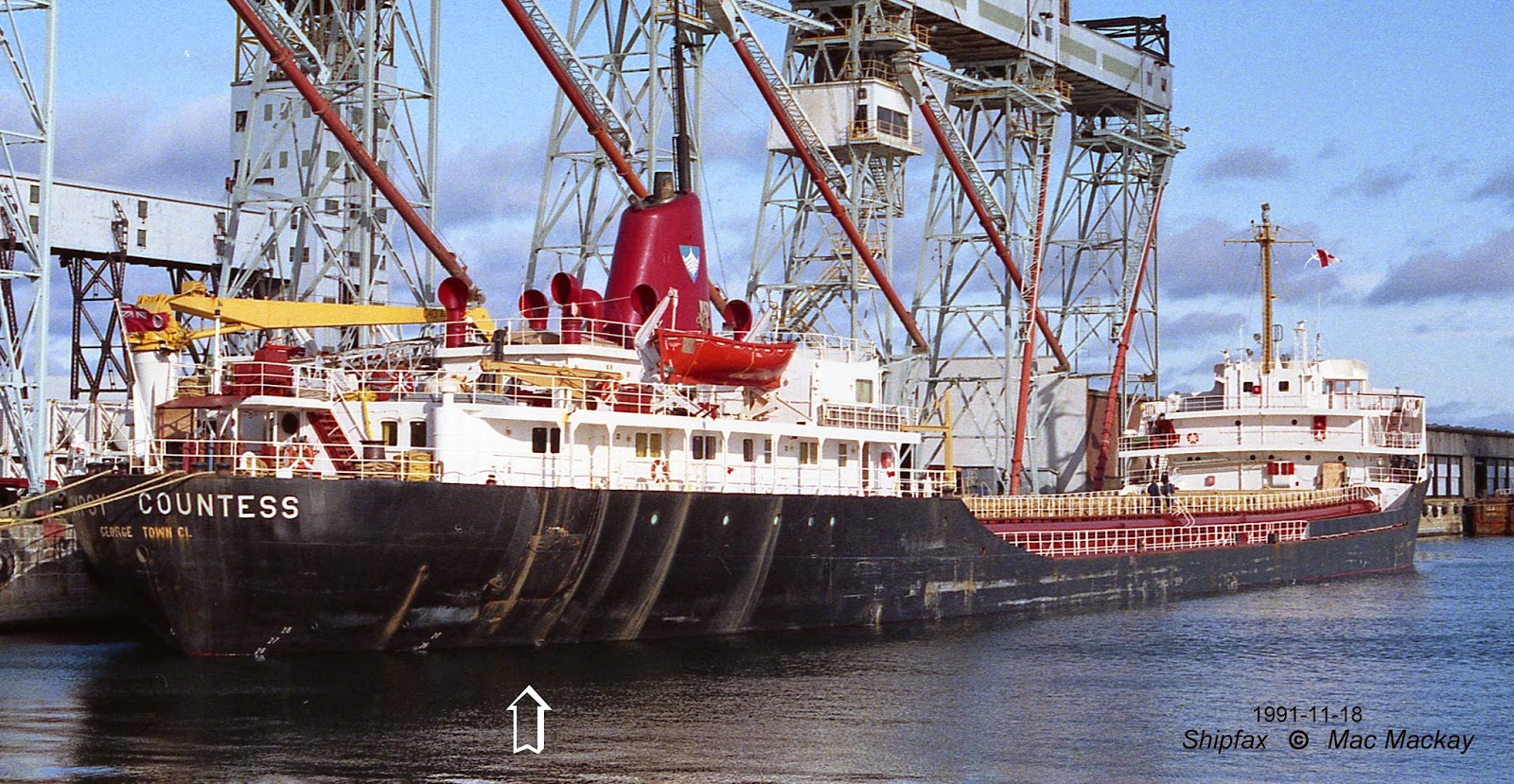 Gypsy Countess from the stern. The arrow points to the conveyor door.

Gypsum Countess, came from Atelier et Chantier de la Seine-Maritime, Le Trait in 1960, and also measured 8240 grt, 10,720 dwt. Equally elegant, it had the same raised forecastle and streamlined forward house. It was sold in 1989 becoming Gypsy Countess. It arrived in Halifax in tow of Point Halifax November 17, 1991 after losing power. It was repaired and in 1994 became Josiff I . It was broken up in 1998 - reportedly in Canada, but I have my doubts.

The third generation were Canadian  built by Collingwood Shipyard, and were among the last steamships built in this country. The layout of that machinery allowed for the self-unloading gear to pass through the engine room, which it would not be able to do with a bulky diesel engine. 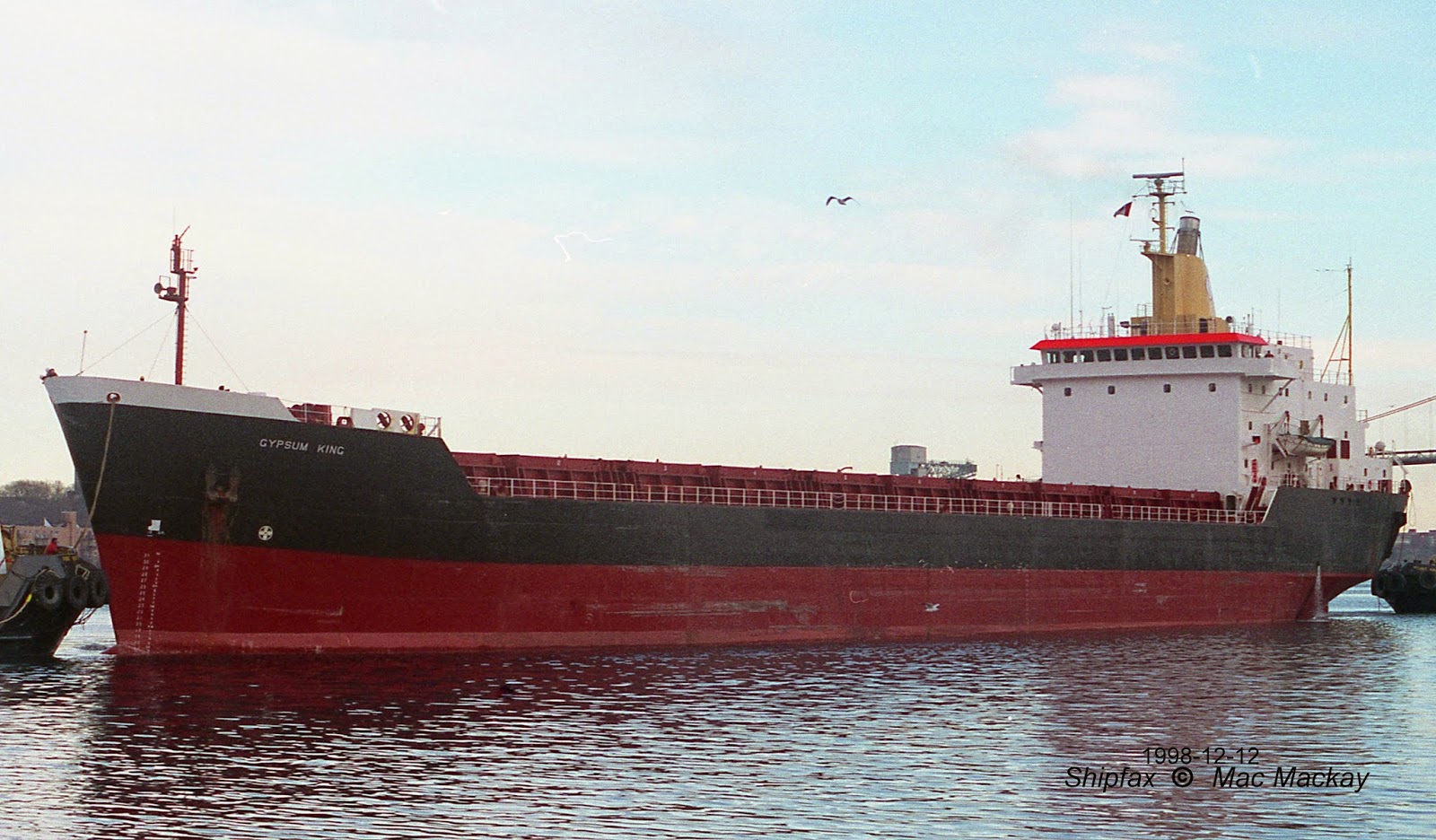 Gypsum King fresh from drydock in Halifax in 1998 sported the traditional Fundy Gypsum colour scheme of white over black with rusty red deck and boot topping. The conveyor door is just above the stern tug's bow.

Gypsum Baron shows the new blue hull colour in 2002. The conveyor door is visible just forward of the rudder, below the weather deck.

Gypsum Baron (1976) and Gypsum King (1975) measured 12,272 grt and unloaded at a rate of 1800 tonnes per hour. This was quite slow by modern standards, but suited USG's needs. Gypsum King was sold in 2003, renamed G.King and arrived in Alang for scrap May 20, 2003. Gyspum Baron was renamed Baron in 2007 and arrived in Alang August 23, 2007 for scrap. Both ships called in Halifax for drydockings, bunkers and occasional winter loads of gypsum.

A.V. Kastner sails from Hantsport at high tide with hatches still open. The ship had to leave on tide time, whether fully loaded or not.

The final generation, built after the company increased its load out rate at Hantsport with twin arms and extended the dock to deeper water, had a short lived career at Hantsport.

They are still operating however, but now in Africa as previously reported:
http://shipfax.blogspot.ca/2014/11/gypsum-centennial-from-where-are-they.html

As an update to that post, when the ship returned to Africa after its refit, it took much needed supplies for the fight against ebola.

There was also a post when USG closed the facilities permanently in November 2011:
http://shipfax.blogspot.ca/2011/11/usg-pulls-plug.html

USCG was not the only gypsum producer in Nova Scotia to close down. Georgia-Pacific in Cape Breton, with quarries at Sugar Camp (River Denys) and Melford, and ship loading facilities at Point Tupper announced its closing in December 2011. There has been no indication that they might resume operations any time soon either.