One of the longstanding harbour operators was Walter Partridge a justifiably famous salvor. From his headquarters at the Western Union Cable wharf, his company Atlantic Salvage Ltd was on standby to assist ships in distress, raise wrecks and refloat grounded vessels. Over the years he responded to scores of casualties. He also operated Partridge Motor Boat Service Ltd, a company started by his father in the late 1800s.

The company ran a number of small boats in the harbour providing line handling at Irving Oil, ferry service to ships at anchor for agents and crew, but also for pilots if the pilot boat was out of the harbour. They also took stores out to ships and did all sorts of boatmen jobs when needed.

I have covered some of their vessels before, such as S.S.Shatford here on Shipfax and the tug Tussle on Tugfax. Others that do not appear in this post, will likely be covered in more detail at a later date.

Partridge used mostly retired navy workboats.Built in the late years of the war, they were very basic wooden craft, with a crew cuddy forward with a stove, a wheelhouse and a cabin to cover the engine and provide some additional crew space. Some had a cargo hatch aft, others an extended cabin for passengers. They worked all over eastern Canada wherever the RCN had bases and there were probably a dozen or more of them built in all. 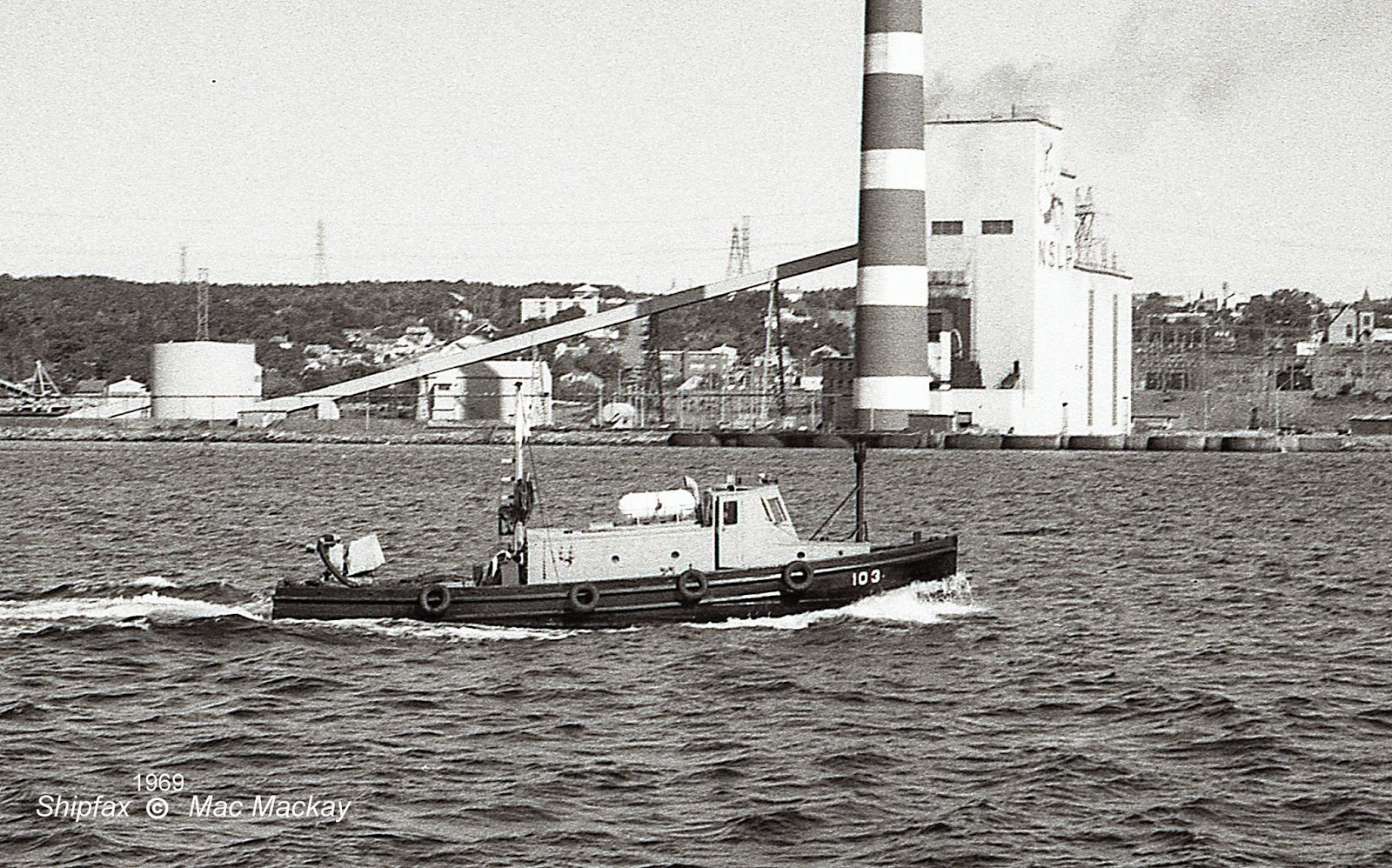 In naval service the boats were given numbers, such as 103 running the Narrows, back when the Nova Scotia Power plant had only one stack.

Most were built in 1944 in Weymouth, NS, likely by LeBlanc Shipbuilding. That company had been established during World War I and built minesweepers, tugs and other naval craft. They probably had enough scraps of material left over from those projects to built these homely craft. As naval craft they were never registered with the Department of Transport, and were not always registered under Patridge ownership. Therefore details are not always possible in these descriptions.

The first one I recall seeing was called Towadon  In about 1970 it was renamed Atsal IV when Partridge began to acquire other ships for the Atlantic Salvage fleet. It was the most basic of the boats, and certainly until the late 1970s it did not carry radar, but did have radar reflector. It was built in 1944 at Weymouth. 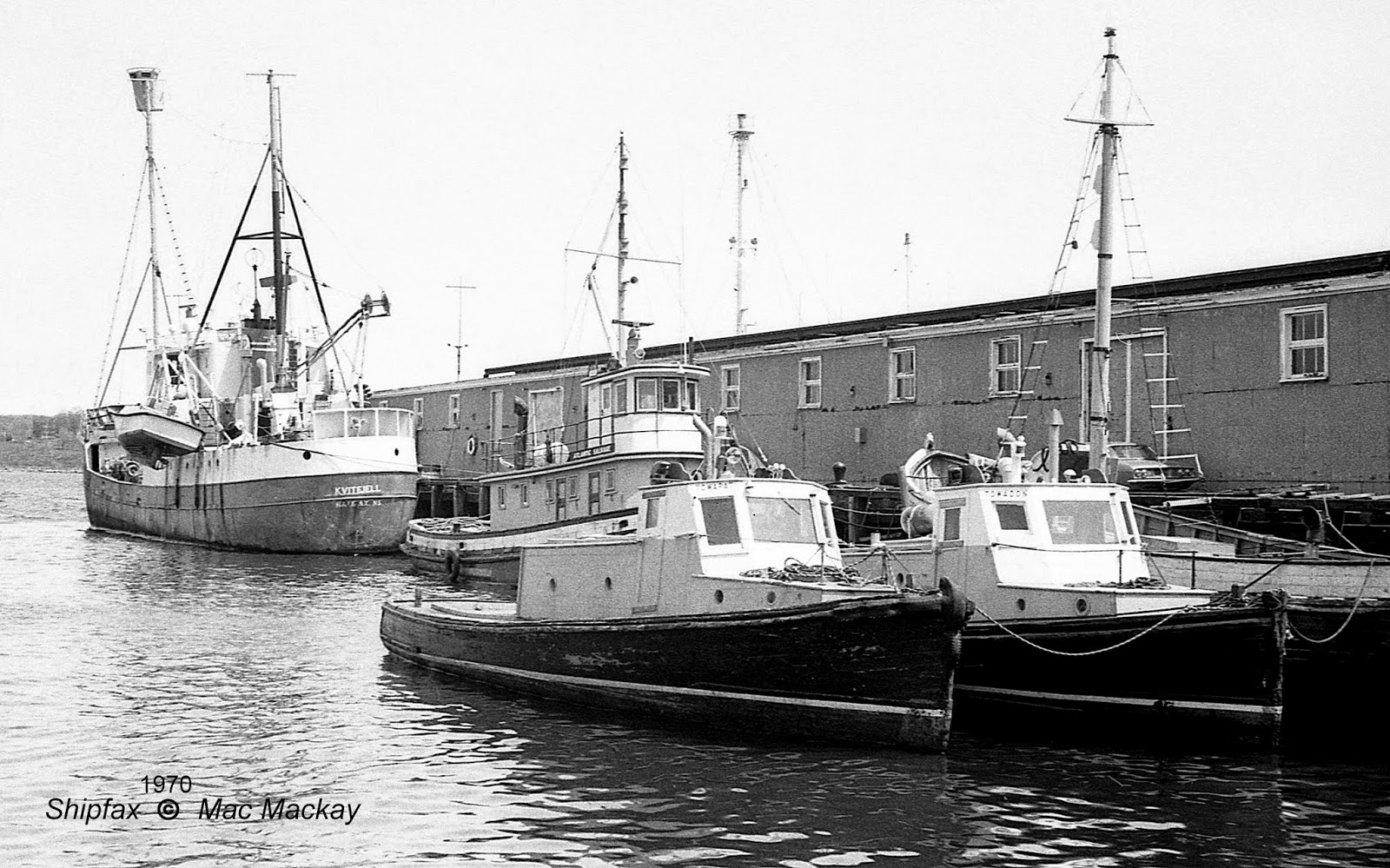 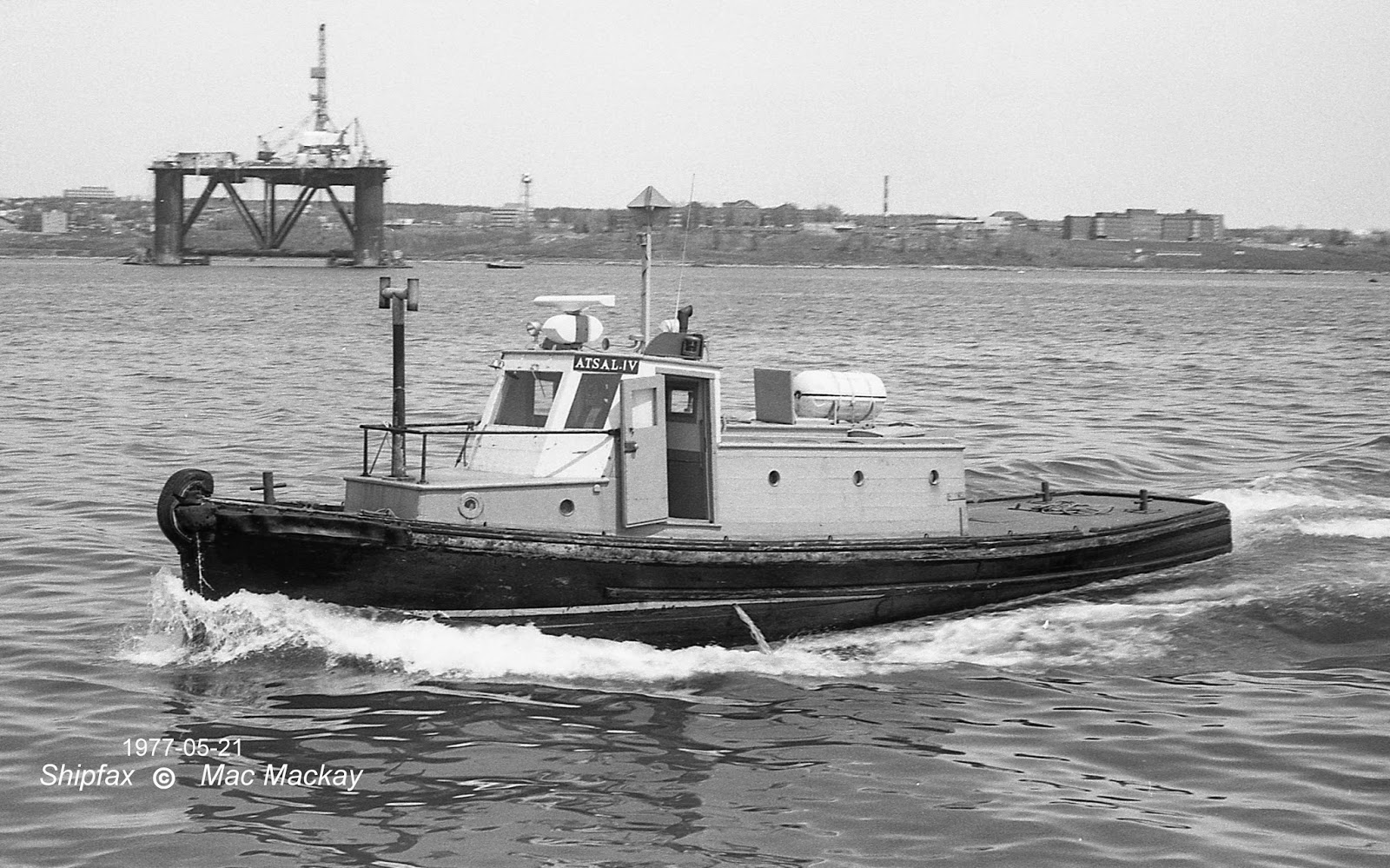 Atsal IV at speed returns to base. 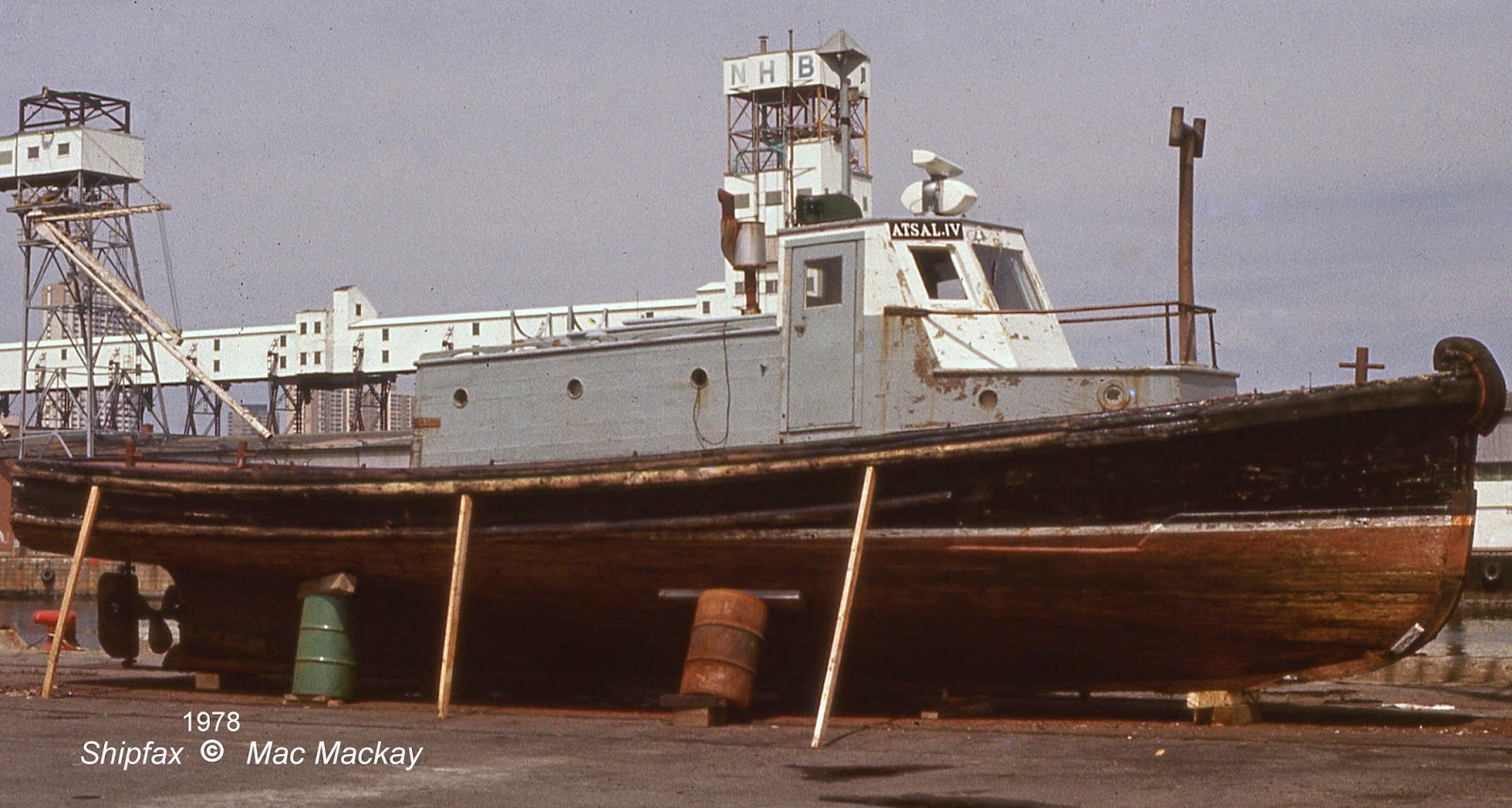 Hauled out on pier 30, Atsal IV gets some badly needed maintenance
Next along was Towapat II. it was also built in 1944, but in Summerside PE, and was registered to Partridge Motor Boat Service. 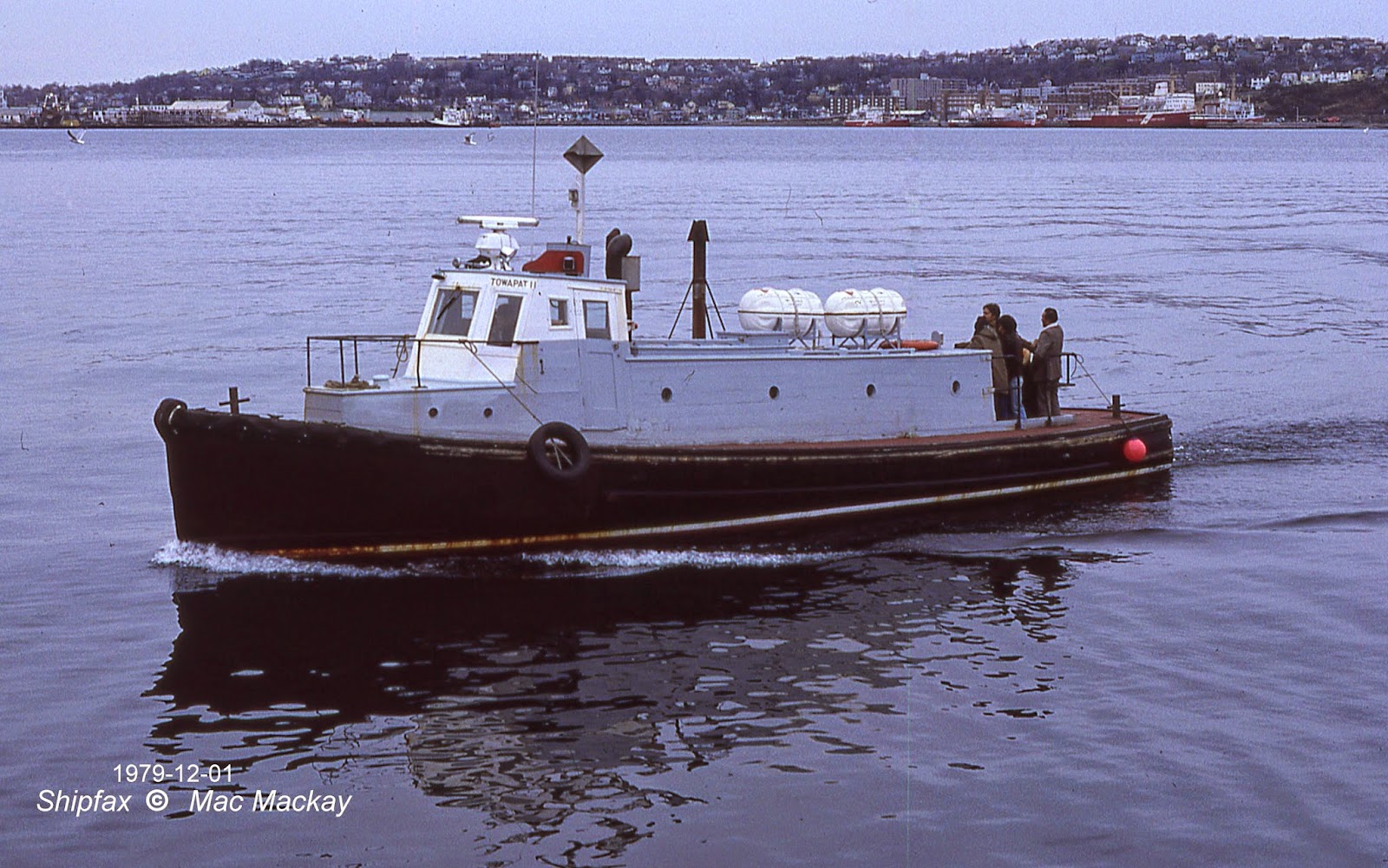 Towapat II had an extended cabin to accommodate passengers. These crewmen going on shore leave preferred the open air of the fantail. 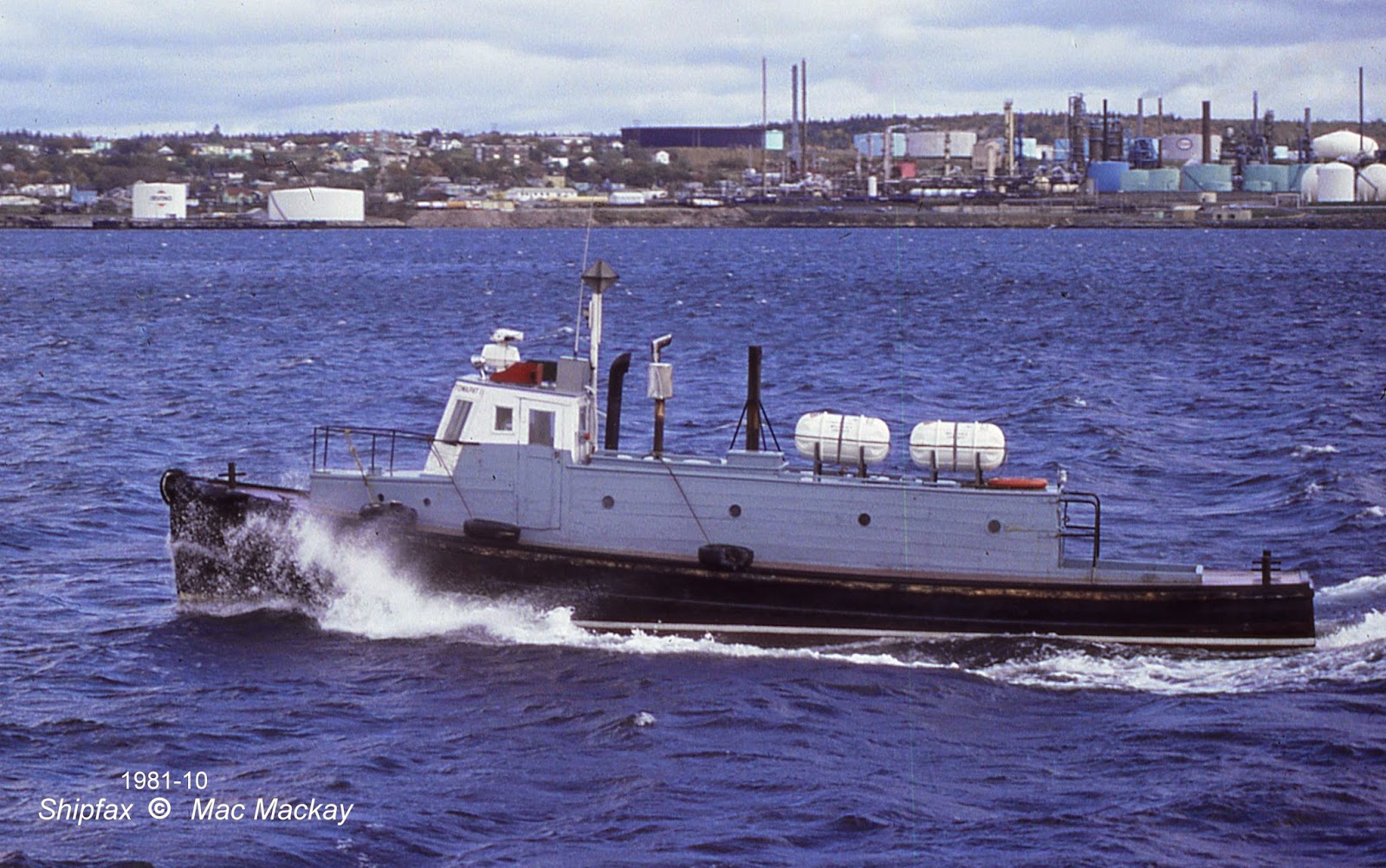 Towapat II storms along. As a passenger carrying vessel it has two capsule life rafts. It was also  equipped with radar. 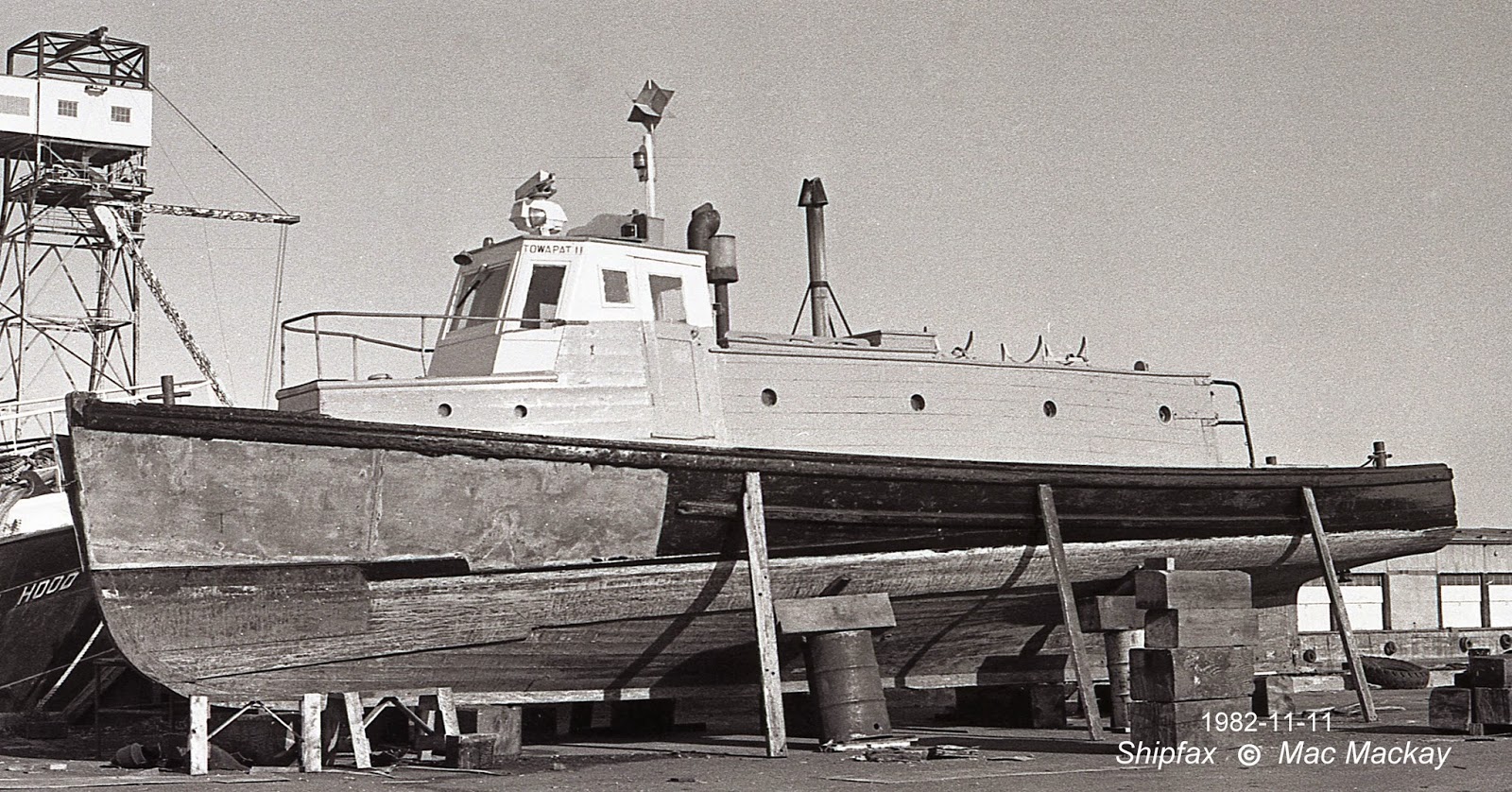 
Another was R.Partridge., likely named for Roy Partridge, father of Walter, and founder of the business. 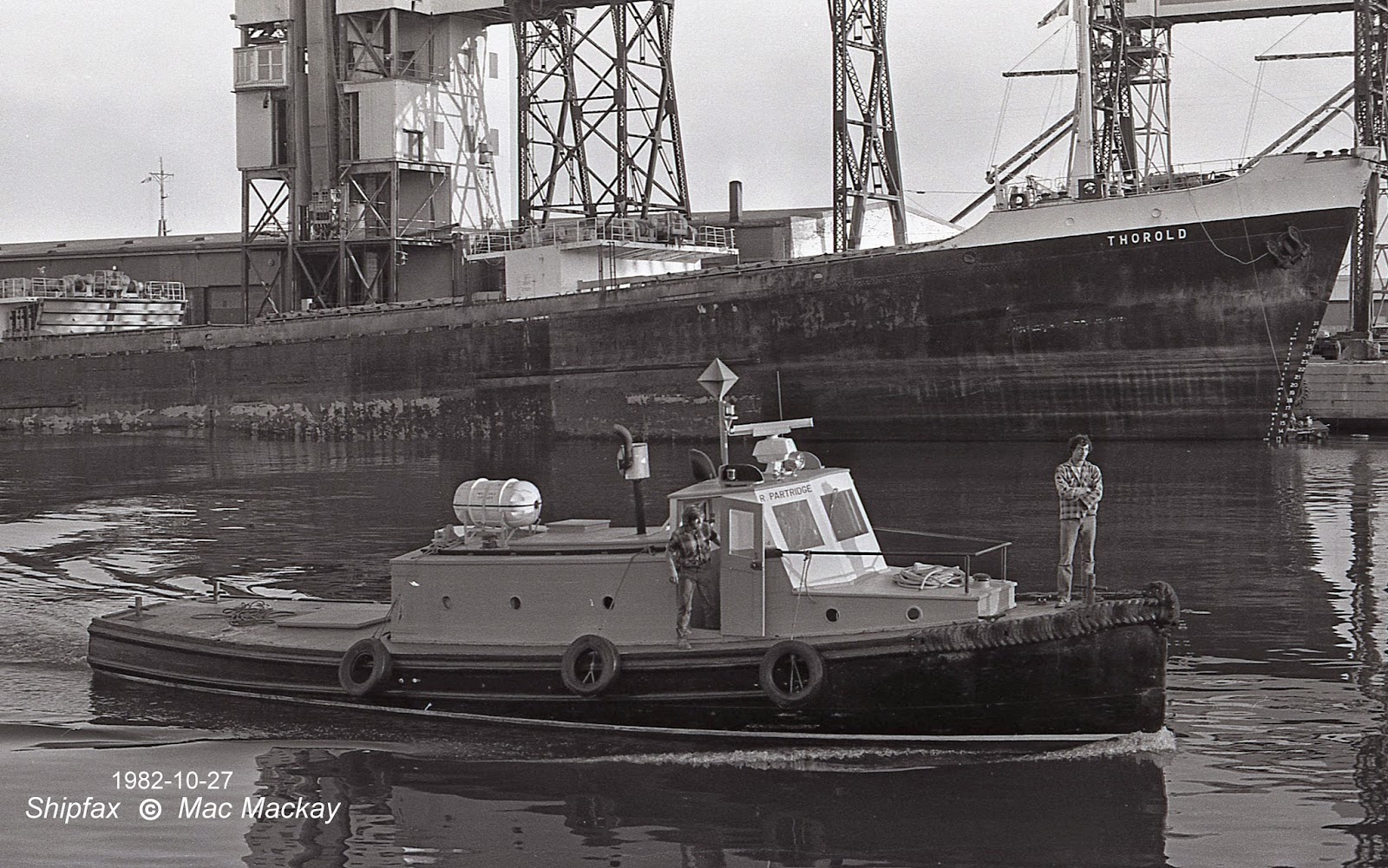 R. Partridge slides in past Thorold preparing to unload grain at pier 26. 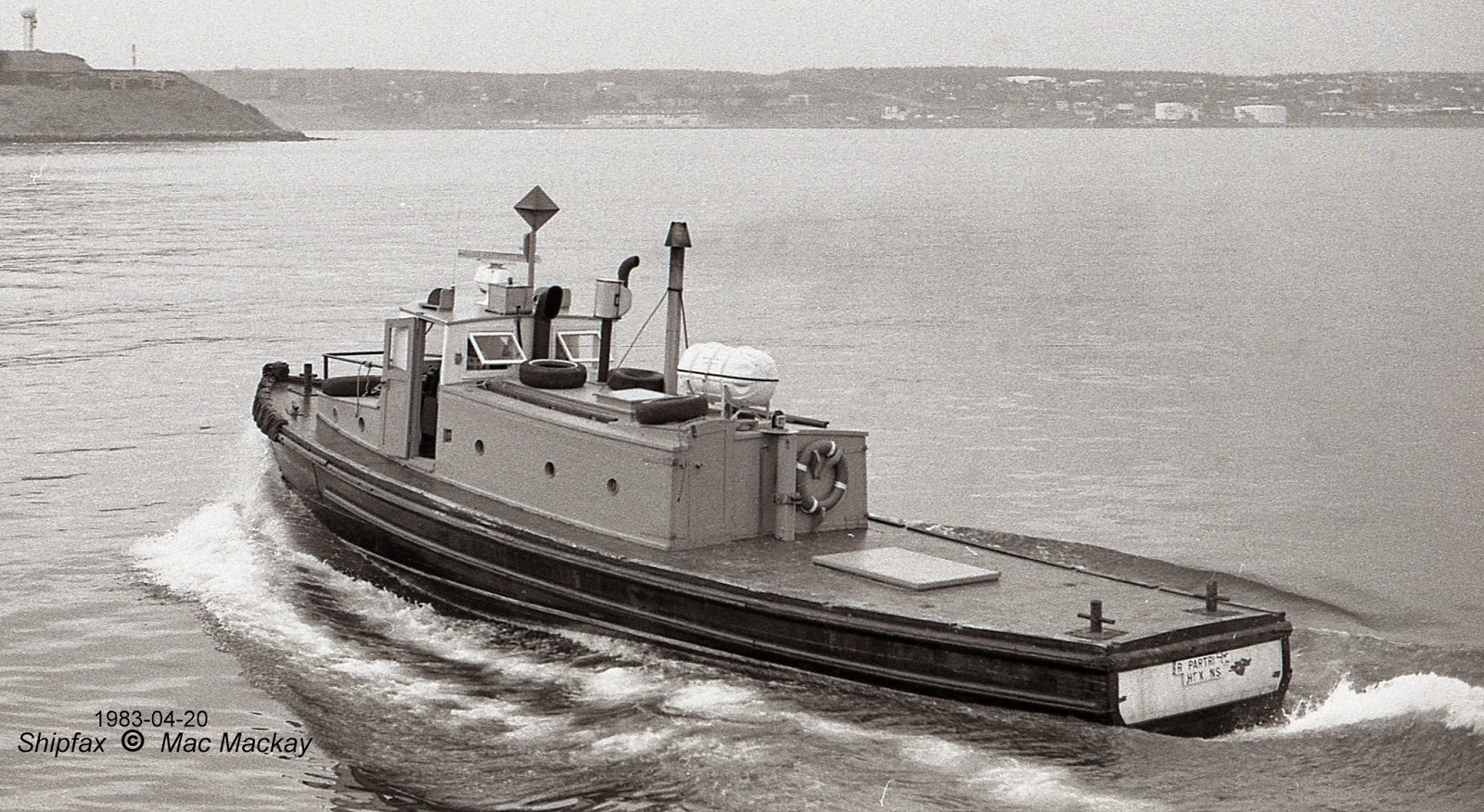 R.Partridge had a shorter deck house and only one life raft.

One of its duties was shepherding the S.S.Shatford which had become a 1/2 TEU non-powered lighter.

When these boats finally wore out the company took the step of commissioning a custom built vessel from A.F.Theriault + Sons Ltd of Meteghan River in 1972. Named Tugger the boat measured 15 grt and had a 125 bhp engine. It performed many of the same duties as its fleet mates, but provided superior accommodation for passengers. 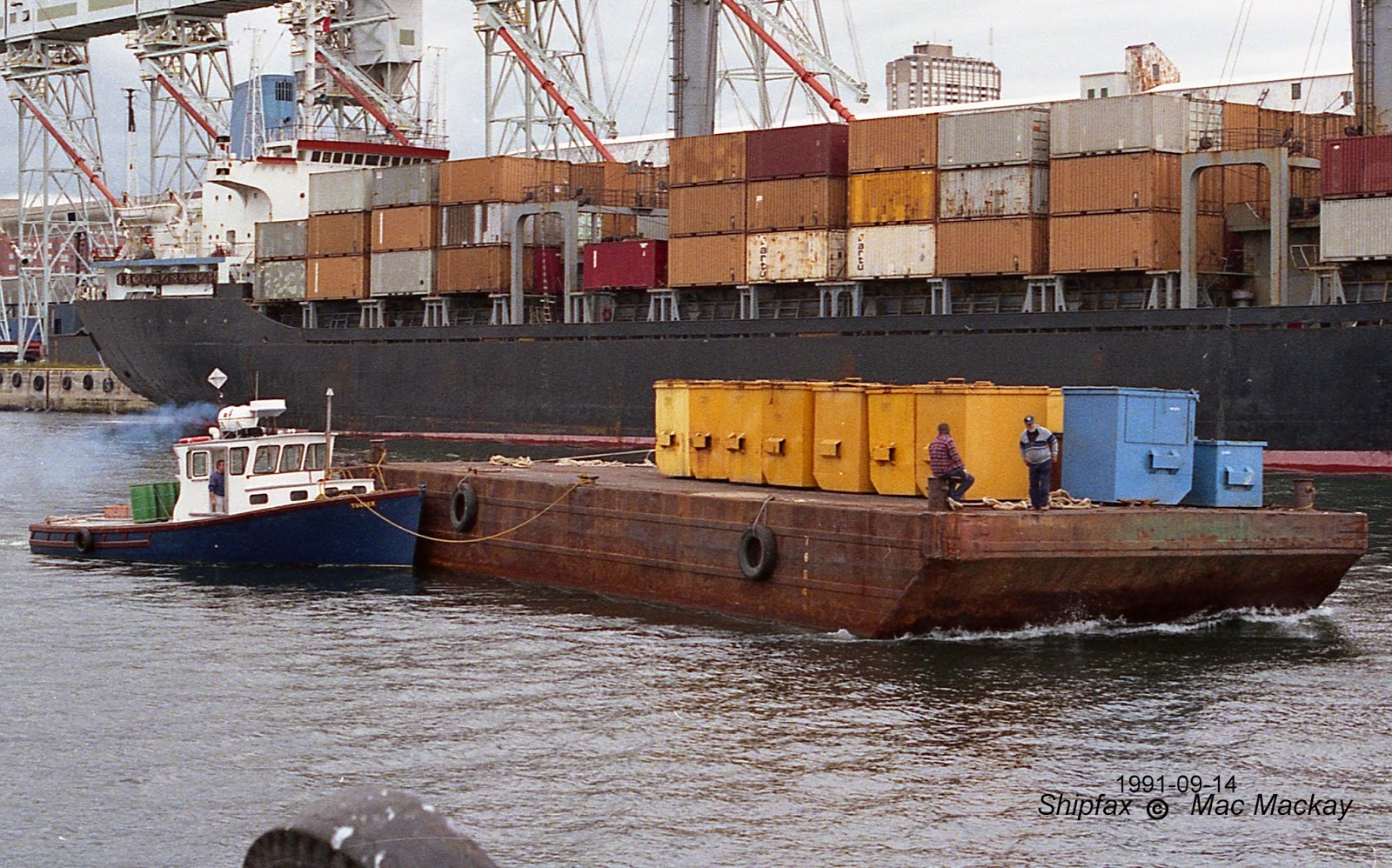 Tugger revs up to move a scow carrying garbage skips from a cruise ship. This unglamorous work was bread and butter for the company. 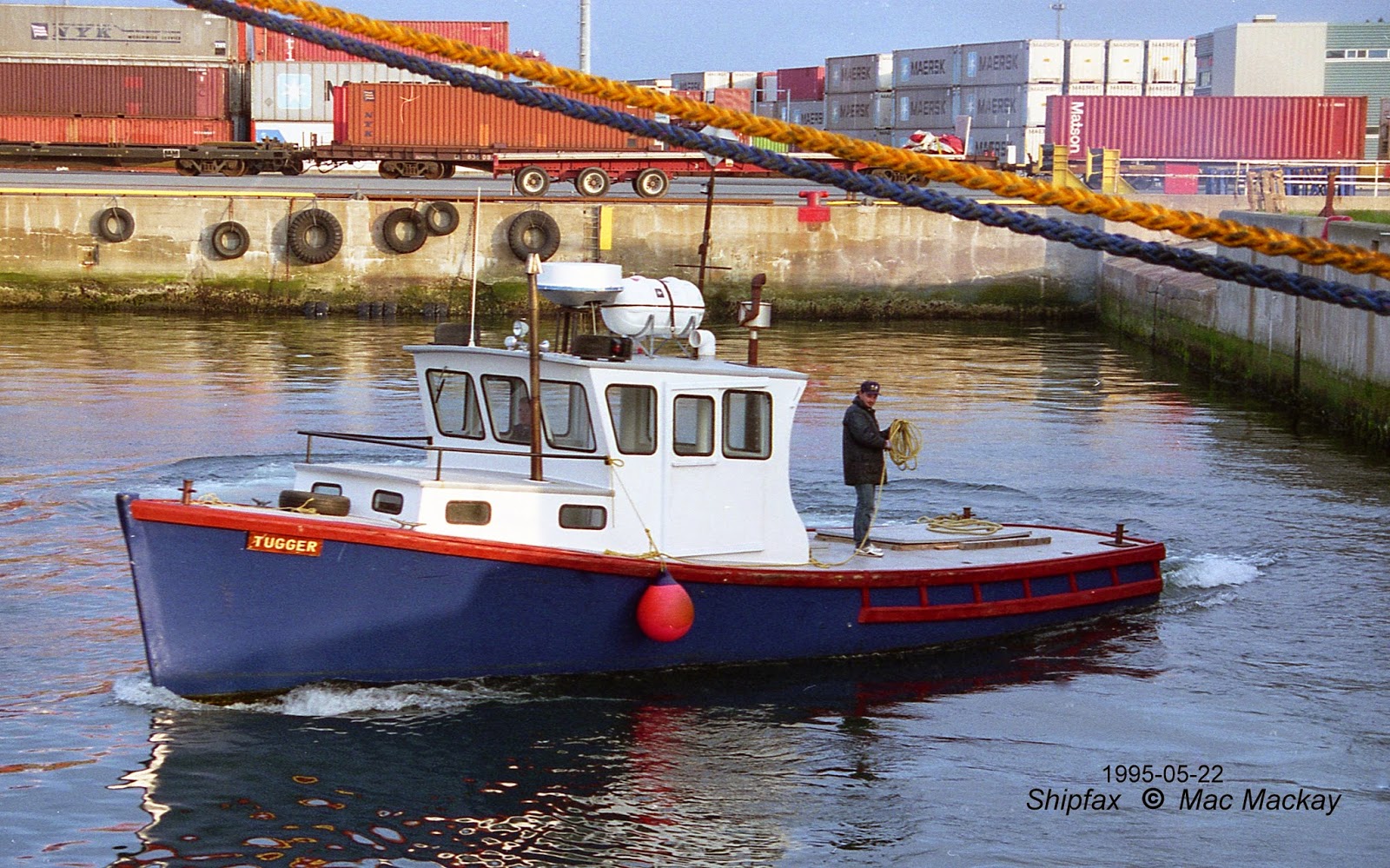 Partridge Motor Boats were a fixture on the harbour for more than a century. The business was finally closed down in 2003. Tugger was sold and is now a derelict in Sambro. (No photo posted, out of respect.)