As mentioned in the last post W.L.Sweeney of Yarmouth was a major owner of these large coasters. In fact he may have been the individual owner of the most ships in Nova Scotia history-but that will have to be a story for another day.

Due to the shortage of steel for non-strategic purposes during World War II, there was a spike in the construction of wooden ships. Smith+Rhuland of Lunenburg was particularly busy and in 1942 they delivered Laurence K. Sweeney to Walter L.K. Sweeney. The 160 footer measured 379 grt and it was powered by a 540 bhp engine.

At some point, about 1945, the ship was acquired by the federal government, renamed Eskimo and put to work by the RCAF to supply northern emergency caches. The cargo consisted largely of fuel in drums, but there were also other emergency supplies. It was also reported in Iceland on one occasion. One trip in particular was noted when it departed Halifax August 21, 1946 on a 5,300 mi round trip to Baker Lake, NWT. The same week Beaver,  a similar ship, was lost in James Bay. It was a 1943 product of Smith+Rhuland.
Sailing in these uncharted arctic waters with wooden ships was certainly risky business, and it must be assumed that the ship were considered more or less expendable.


The Hudson Bay Company bought the ship for $65,000 in 1947 but only operated it for two years. (During that time their Nascopie was lost and the new Ruperstland was delivered. They also had several other wooden ships of similar type operating in the north.) 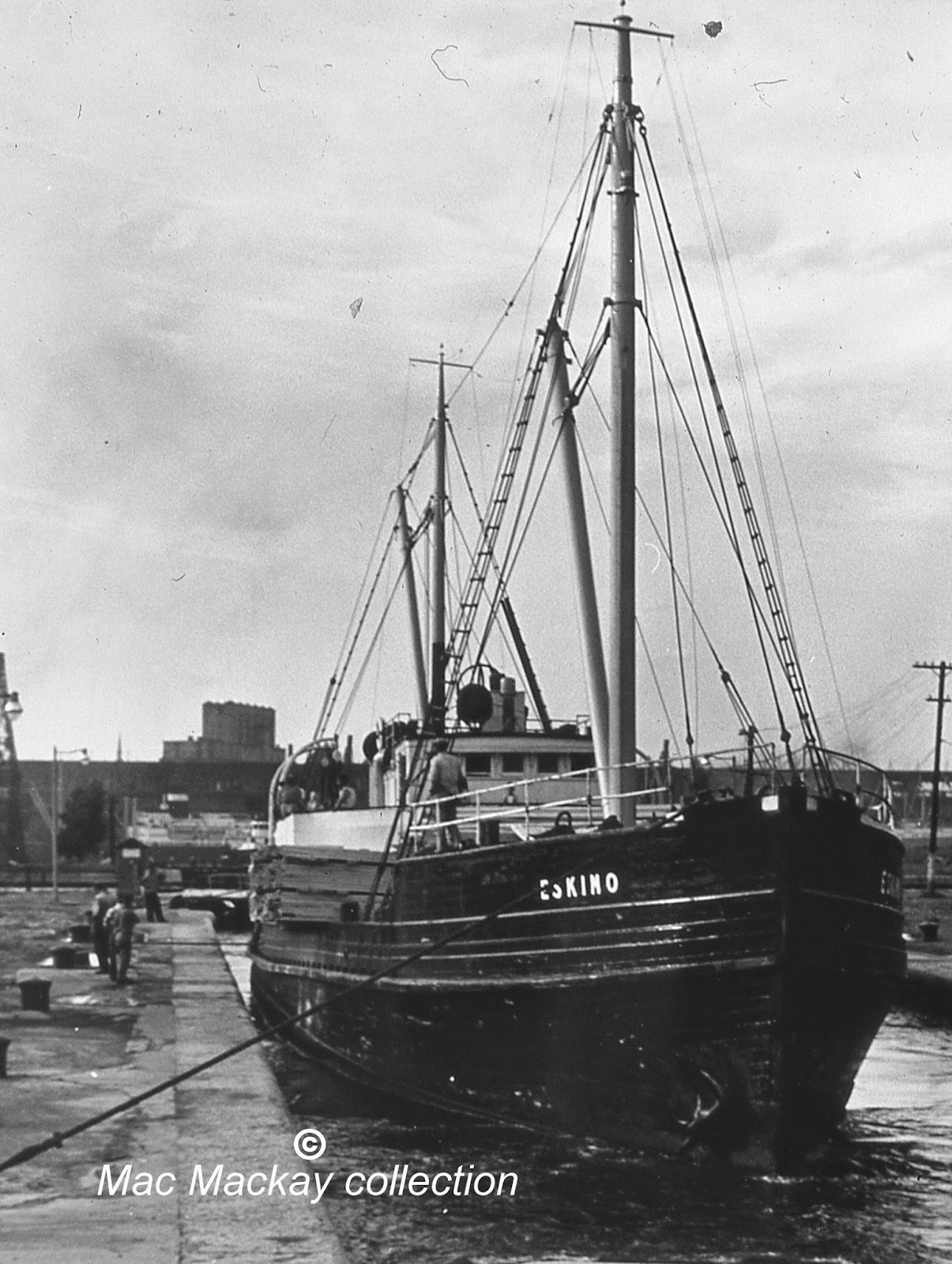 Eskimo in Montreal with a deck load of lumber.

The Prince Edward Island Industrial Corp bought the ship in 1949 for $75,000 (a good return on investment for the Bay) to operate a service on the Northumberland Strait and to Newfoundland carrying cattle.That service was provided jointly with Blue Peter Steamships of Newfoundland, but Blue Peter provided a more suitable ship for 1952  and the ship was sold again. The new owner was Alphonse Beauchemin of Matane, QC, who paid $65,000. It sailed from Halifax April 1, 1952 for its new home port.

The tremendous growth on the North Shore of Quebec meant that Matane was a jumping off point, since it was at the end of the rail line. The small Quebec wooden coasters of 100 grt or so could not handle some of the large loads and steel hulled ship were not available in the immediate post war years. These big coasters filled a gap for a time.The ship worked on the St.Lawrence, Newfoundland and made other trips, including northern supply runs.
On March 11, 1958 it was apparently wrecked at Moosonee, ON. Due to the time of year of the incident, the ship must have wintered over in that James Bay port, but since no official report was filed, the circumstances surrounding the incident remain a blank.


Another Smith+Rhuland product was built as the J.E.Kinney for the owner of the same name, also from Yarmouth, a former mayor of the town. It was launched Ocotber 7, 1941 and moved to the government wharf to be fitted with a 540 bhp Fairbanks Morse, then slipped for shaft and prop installation. The 388 grt ship measured 166' in length, 30.5' in breadth and 10' depth.
Before the end of the year however, it was taken over by the Canadian government's Army Service Corps and renamed General Schmidlin. It was sent to Newfoundland for target towing and supply work In 1946 it was transferred to the west coast and transferred to the Royal Canadian Navy in 1948. Renamed Cedarwood it was given the pennant number AKS 530 and operated as a naval auxiliary vessel with a civilian crew. It was tasked with arctic supply and survey work. 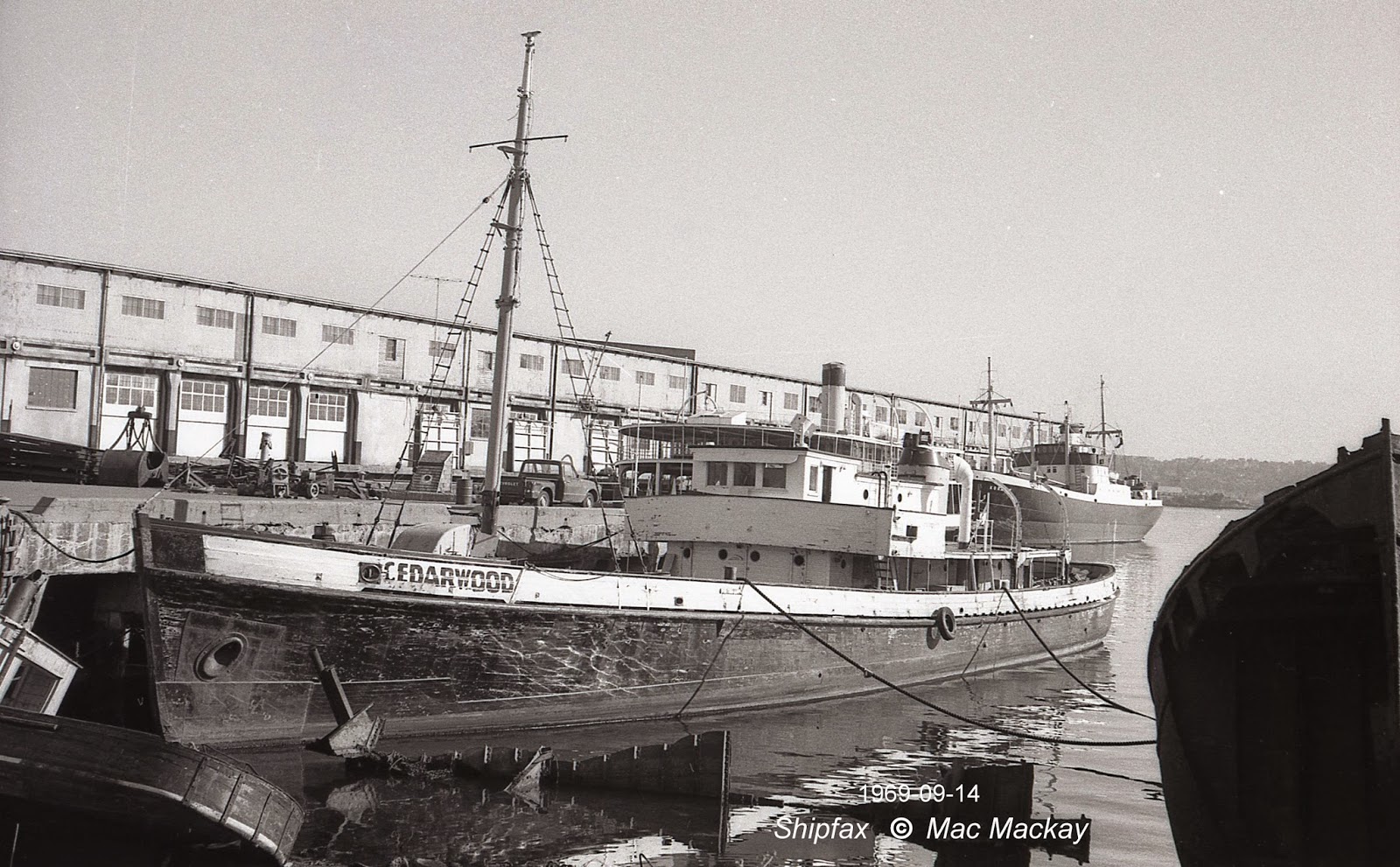 Cedarwood was flush decked, and had a schooner bow.There was crew accommodation below deck forward in a forecastle. Its hull was sheathed for working in ice.

On December 3, 1954 it was overwhelmed by heavy seas and 80 mph winds in the Hecate Straits but its crew of Lt.Cmdr J.E.Wolfenden, four officers, 30 men and five scientists survived. The ship was heavily damaged, but apparently repaired. It was paid off October 18, 1956.

In May 1958 for the centennial of British Columbia it was temporarily converted to resemble
Commodore, the first steamer to bring miners to British Columbia in the gold rush of 1858.
In 1959 Crown Assets sold the ship for $8,700 to Coast Cargo Services of Vancouver. In 1965 it was transferred to Barbados flag by Berven Enterprises Ltd and McCartney Enterprises Ltd of Vancouver. It wound up in Halifax about 1969 in a fairly derelict condition and partially dismantled. It was eventually beached and abandoned somewhere in the Halifax vicinity, perhaps Prospect.