With a number of interesting ships and first time callers in Halifax over the past few days, it has been frustrating that weather conditions (particularly on land) have been so desperate as to preclude driving. From heavy snow through rain and back to snow, then temperatures yo-yoing from sub freezing to a balmy +4 then back to the deep freeze tonight, your intrepid blogger took life in his hands today to make a quick tour of the waterfront.

Harbour business has been proceeding undiminished, but slowed sometimes by weather. A swell is still running in the harbour, but the pilot boat can still work safely. 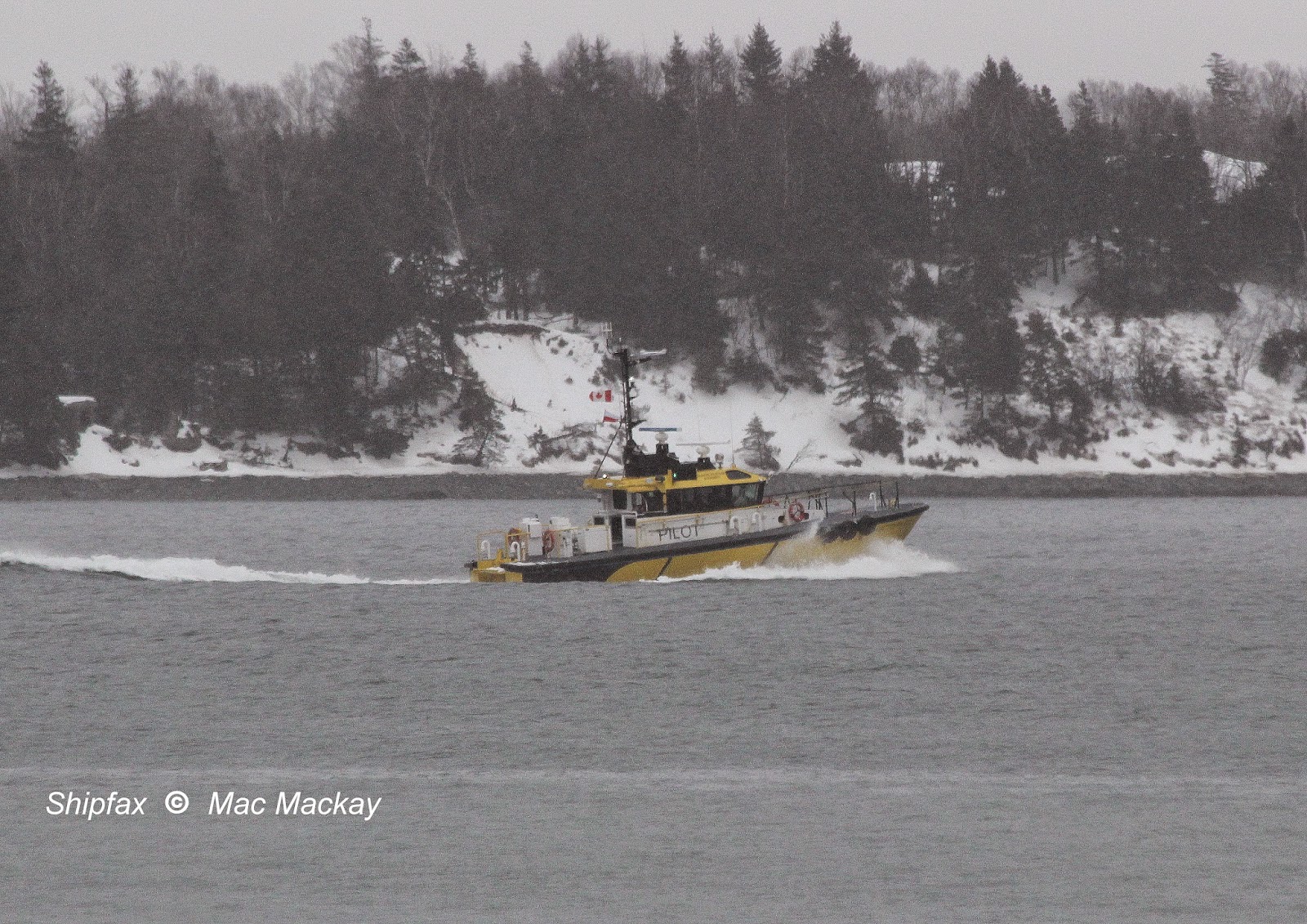 Chebucto Pilot rides a small swell in the harbour.

Snow and ice removal on the shore-side proceeds at full tilt so that ships may be unloaded or loaded.

Autoport must have been a major mess of snow and ice, and Wilhelmsen's Aniara was delayed in moving over to the Halifax side to work some project cargo. It was finally able to sail this afternoon for New York. 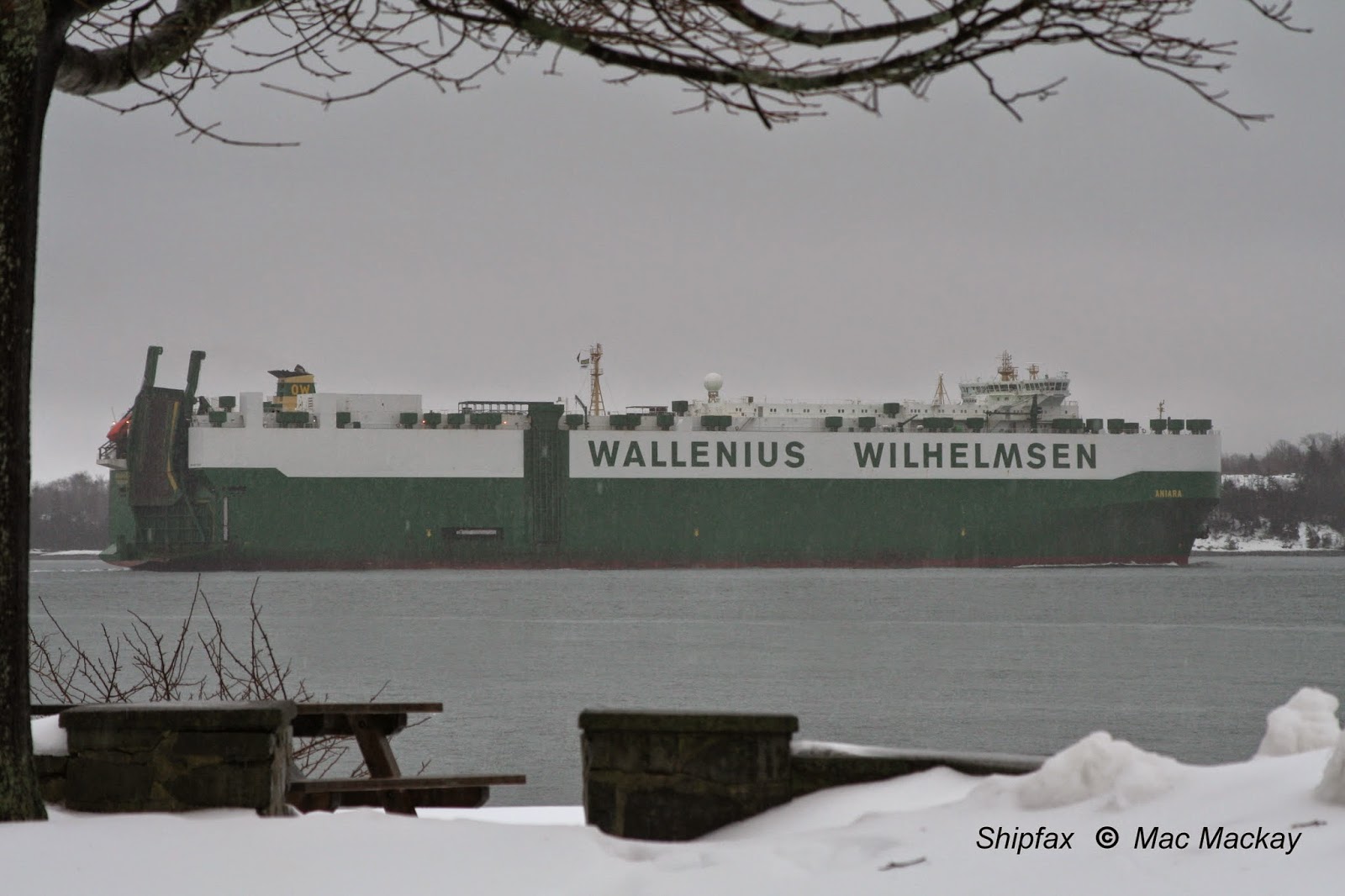 There were no picnic bench users to see the departure of Aniara for New York.

Aniara was built in 2008 by Daewoo Shipbuilding and Heavy Engineering in Okpo, South Korea, and counts among the larger ship in the Wallenius Lines fleet at 71,672 grt and a capacity of 7,600 cars.


At the adjacent pier 27 Onego Trader was unloading another load of rails for CN. The 6301 grt, 8930 dwt ship has a pair of 40 tonne cranes to work cargo from its two holds.The holds are box shaped, the ship is double skinned and its pontoon type hatches are the full width of the holds.
It was built by Bowdewes Volharding in Foxhol, Netherlands  as Devi Laksmi in 2001. It became Harns in 2008 for current owner SO Harns CV. It took its present name in 2010 when it began its charter to Onego, and still flies the Dutch flag.. 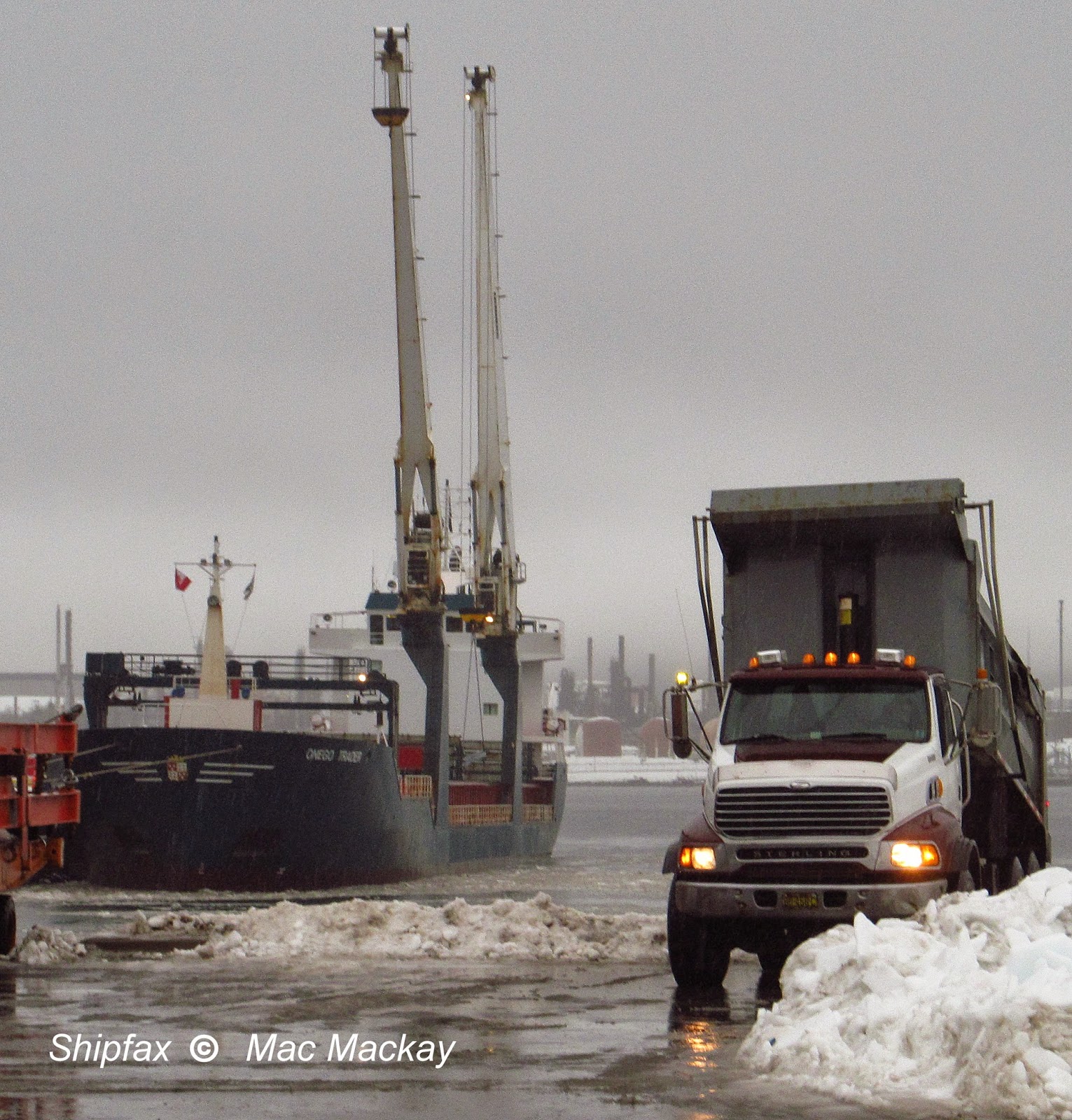 A dump truck adds to the salinity of Halifax harbour as Onego Trader takes a lunch break from unloading at pier 27.

It is not the first Onego Trader to call in Halifax. A previous ships of the same name was built in 2003 by the same shipbuilders, but in Hoogezand (on a hull built in Russia). It unloaded rails here in 2005 and 2007. 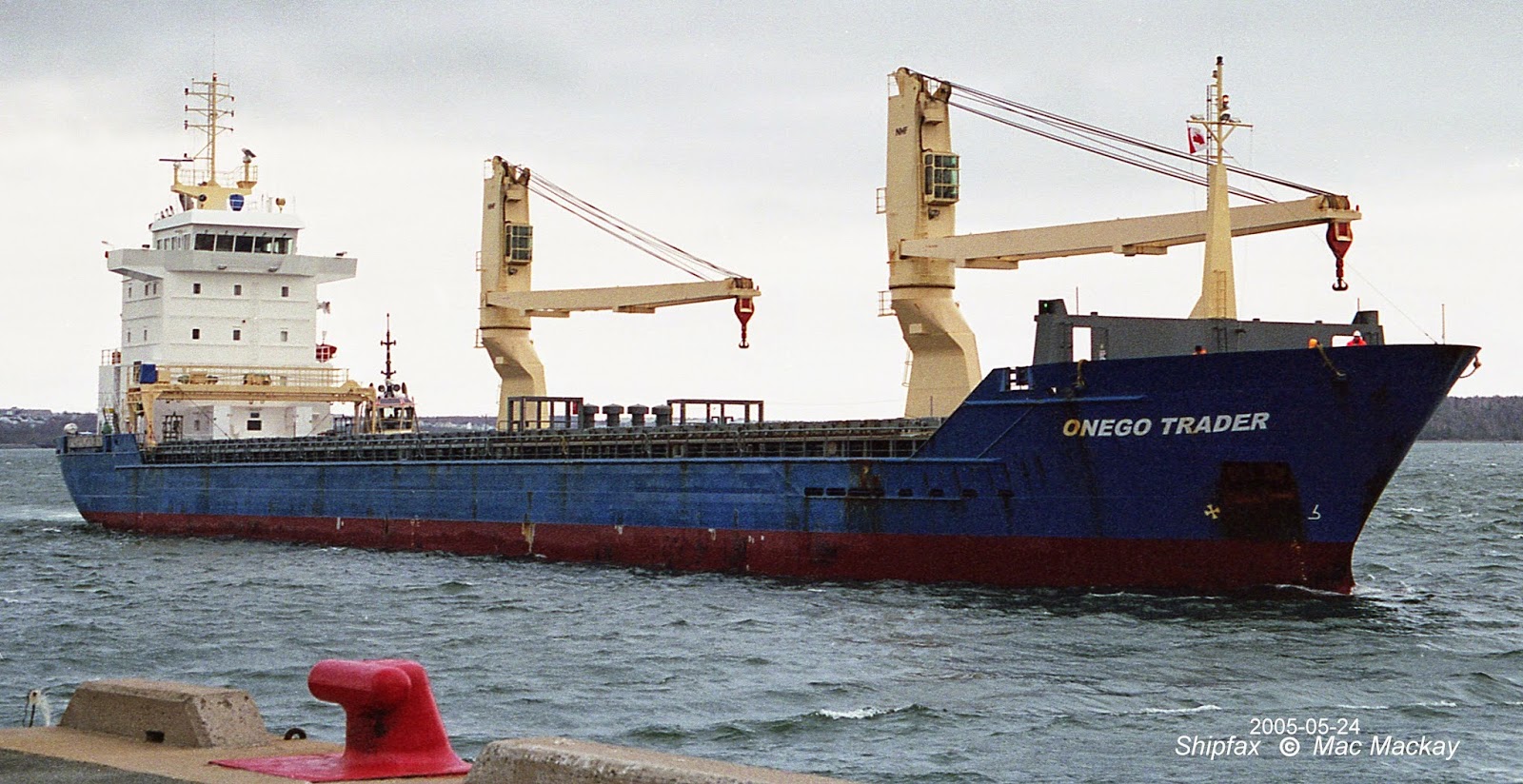 At the farthest end of the harbour a very different ship was loading gypsum. CSL Thames is operated by CSL Norway AS of Bergen, and is not usually seen on this side of the pond. In 2011 CSL formed CSL Europe and acquired the eleven ship strong self-unloader business of Kristian Jebsens Rederi A/S. Jebsens were European pioneers in using belted self-unloaders, and had a fleet of smaller ships that could access smaller ports. Although they were seen from time to time in Canada their business was usually in North Europe and the Mediterranean.

Like most Jebsens ships, CSL Thames has its self-unloading gear mounted well forward in the narrowest part of the hull where it takes up less cargo space.

Trones joined the CSL Europe fleet in 2011 and now sails as CSL Shannon.
.

Earlier in the day (while it was dark) another CSL pool ship stopped in Halifax for bunkers. Honourable Henry Jackman seldom calls in Halifax, due to its size, but it is a regular visitor to the Strait of Canso. Built in 1981 by Mitsui Engineering and Shipbuilding in Chiba, Japan as the single hull tanker Berge Charlotte it was delivered as Lagoven Caripe, became 96: Caripe, 96: Patrolokos. Algoma Shipping bought the ship in 2007 and rebuilt it as a self-unloading bulker of 46,191 grt, 75,598 dwt. Chengxi Shipyard in China built and installed a new forebody which also contained the self-unloading apparatus, which is mounted aft (unlike the Jebsens types).

Not being able to take a photo, I will instead refer to CSL Pool's spec sheet:
http://cslships.com/files/csl/csl_henryjackman.pdf