Eimskip, the Icelandic shipping company that celebrated its 100th anniversary January 14, 2014, has combined its previous Red Line and Green Line into one service, called the Green Line. Ships will now sail between Europe and North America, via Iceland, but without transshipping cargo as was the case with the two line system.
The Green Line previously operated with two ships, Skogaoss and Reykjafoss (foss means waterfall) and now adds Selfoss to the rotation. This will result in five* more sailings per year for the line.
Halifax is an east bound port of call for Eimskip, and Selfoss arrived today for the inauguration of the new Green Line. 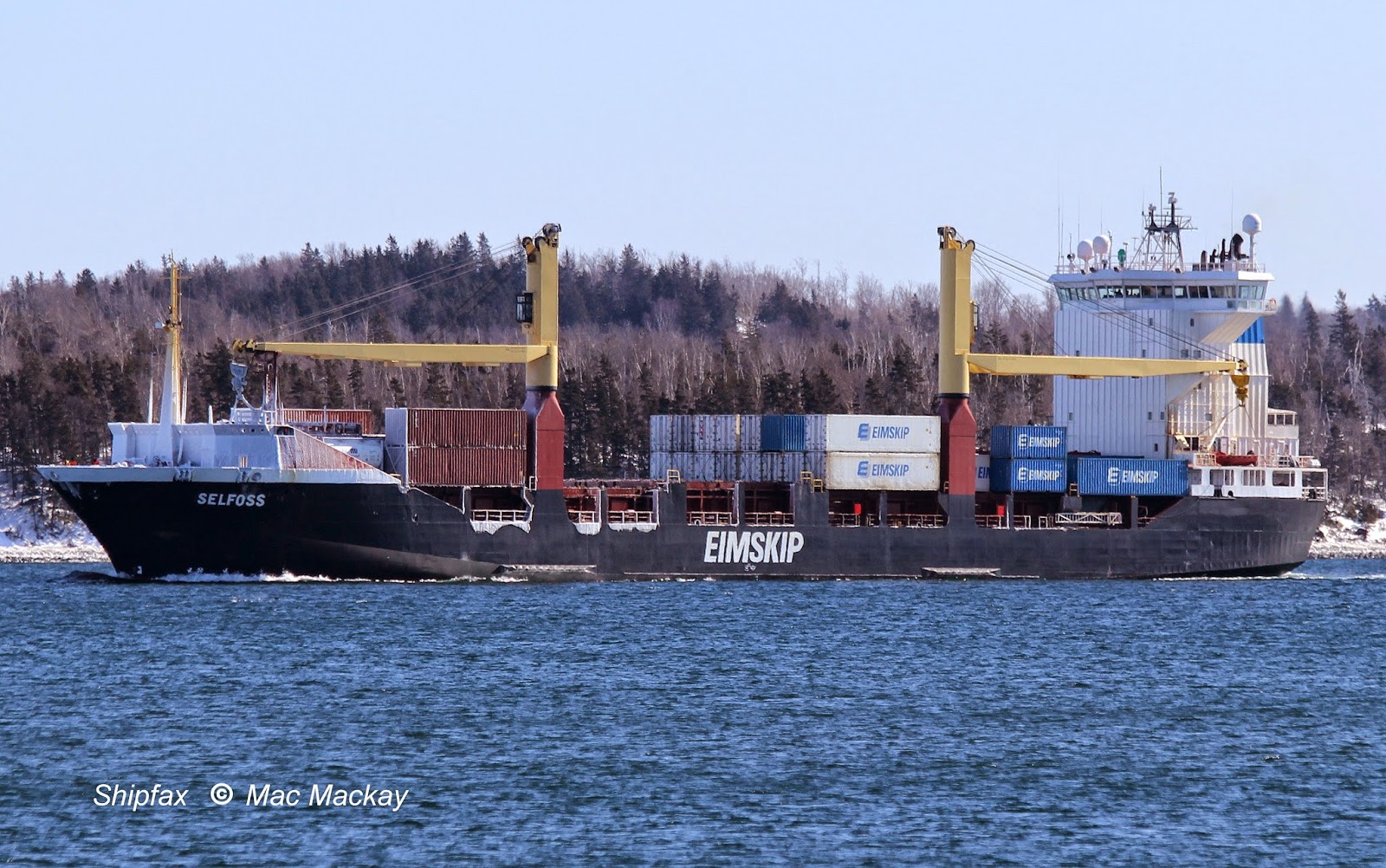 The ship was built in 1991 by Orskov Christensens in Frederikhavn, Denmark as Hanne Sif, but began trading as Maersk Tertio. It returned to is original name in 1994 and was renamed Elizabeth Delmas in 1995, Venti Di Ponente in 1996 for a time and was again renamed Hanne Sif until 1999. It has carried the name Selfoss ever since. Of 7676 grt, it has a container capacity of 724 TEU and has two 40 tonne cranes.

The port rotation for the new Green Line is a lengthy one. After leaving Halifax the ship will call in Portland, ME, Argentia, NL, St. Anthony, NL (subject to ice and cargo), Reykjavik, Isafjordur, Akureyri, Rotterdam, (some ships will call in Immingham, UK and Sortland, Norway), Reykjavik, Argentia, Halifax.

Eimskip is also a large operator of freezer warehouses in various parts of the word, and most of the cargo it handles in Halifax is refrigerated goods.

With every container berth in the harbour occupied this morning, the ship will anchor until a spot is available.

Update: The number of sailings will increase, but it now appears that it mat be much more than by 5. Another source says it will increase from 13 per year to 31. This would imply that the ships will call in Halifax both eastbound and westbound. Effectively they would thus be creating a feeder service between Halifax and Portland. The lengthy list of failed stand alone feeder services from Halifax to New England would discourage many shipping lines, but since Eimskip's ships are on the run anyway, perhaps they could make a go of it.