The Halifax-Dartmouth ferry service must be one of the most reliable means of transportation in the Halifax area. It seems to operate no matter the weather. However for the first time in many moons it was shut down Sunday, February 15, 2015 during an intense rain and ice storm. People were asked to stay home and off the roads, due to the hazardous conditions. The ferries probably could have run, but for the safety of crews and to discourage travel they were out of service for the day.

Having featured ships named Halifax in several posts, the series would not be complete without mention of the several harbour ferries that have carried the name Halifax. Since the ferries were operated for many years by the Dartmouth Ferry Commission (to 1958), the Town of Dartmouth (to 1961) and the City of Dartmouth, the ferries usually operated in pairs, with a running mate named Dartmouth.

The Halifax - Dartmouth ferry service pre-dates the steamboat era, and was initially started with a paddle vessel, powered by horses on a treadmill. It was well into the steam age, and several boats later, before ferries were named for the two towns facing each other across the harbour.

HALIFAX (i) and DARTMOUTH  (i)

The first Halifax (i) ferry, a side paddle wheeler, dated from 1878 when it was built by William H.Baldwin of New Baltimore, NY with the patriotic name of States Rights. It was renamed Annex 2 in 1888 and was operating between Brooklyn, NY and Jersey City, NJ in 1890 when the Dartmouth Ferry Commission bought the ship. It sailed on its own via Yarmouth and arrived in Dartmouth June 26, 1890. On December 9, 1909 an arsonist set fire to the ship and it was so badly damaged that it was sold for scrap to Charles Brister.

Its running mate Dartmouth (i) came from the Burrell - Johnson Iron Co in Yarmouth, NS in 1888. It was a side wheel paddle steamer and operated for 47 years. Renamed Old Veteran in 1934 when a new Dartmouth (ii) was built, it was sold for scrap the same year and broken up in 1935.

HALIFAX (ii) and DARTMOUTH (ii)
The next Halifax also lasted for a long time, logging 45 years in harbour service. Built in 1911 by Napier + Miller of Old Kilpatrick, Scotland it was a typical double ender, with rudders and props fore and aft, and corresponding wheelhouses. It had passenger cabins on each side of the hull with carriageways each side of the centre line funnel casing. Its delivery trip from started from Clydebank August 8, 1911, but was interrupted by storm damage, when the ferry put in to Lough Swilly three days later. What followed was a harrowing trip, with the boat continually swamped and pumped out only to be swamped again. A temporary bow, or breakwater, built at one end of the deck was smashed and the master was severely injured in a fall. However the boat arrived in Halifax towards the end of August but it took several months to get it in shape to operate. 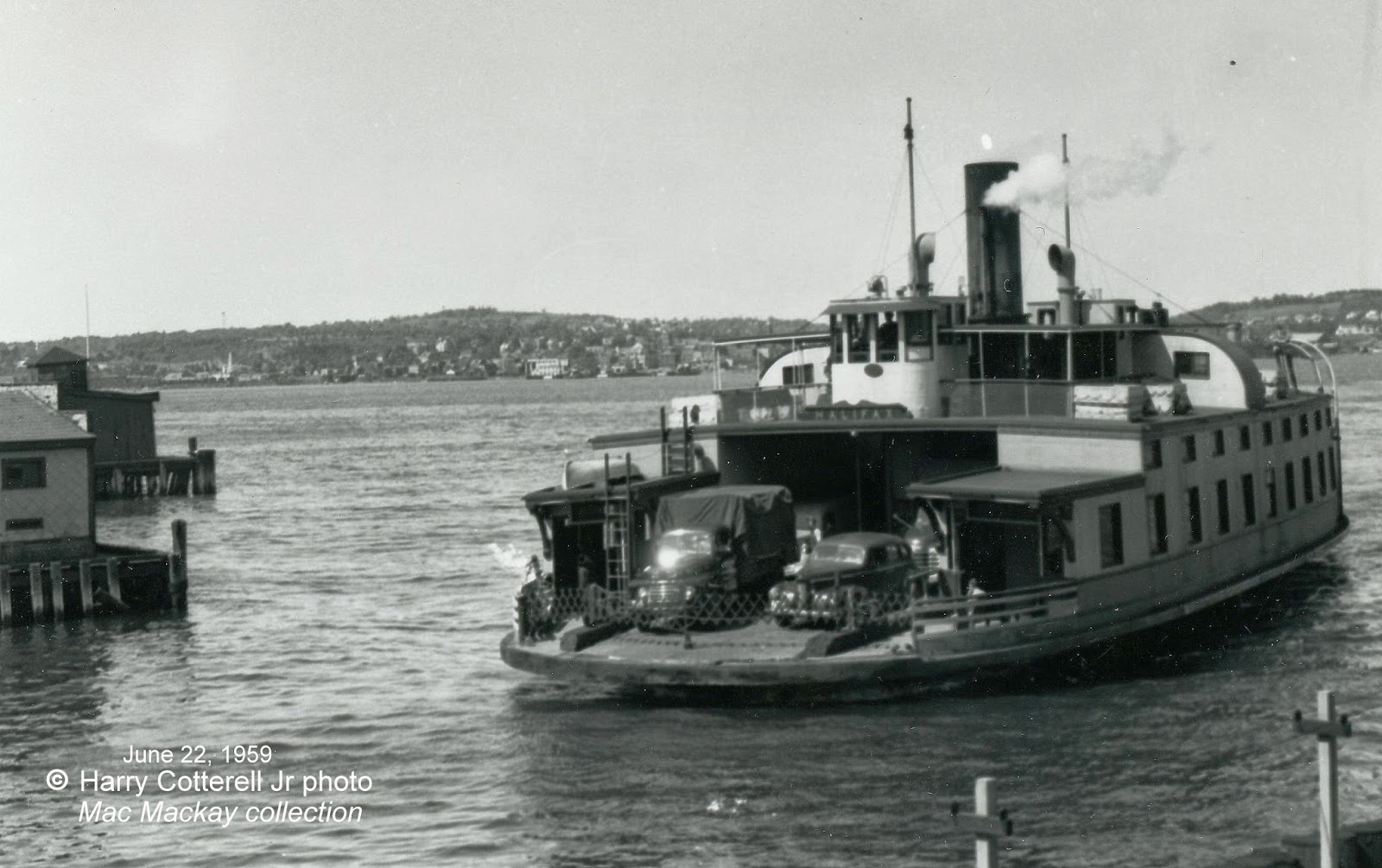 
After 45 years of service, the boat was sold for scrap in October 1956. However it was only reduced to a hulk and the hull was used as an equipment float by Construction Equipment Ltd (a division of Foundation Maritime.) but was undocumented, since it was no longer used for transportation purposes.


Its fleet mate Dartmouth (ii) came from DavieShipbuilding+Repair in Lauzon, QC in 1934. It followed the proven double ender design with fore and aft screws and rudders and two wheelhouses. 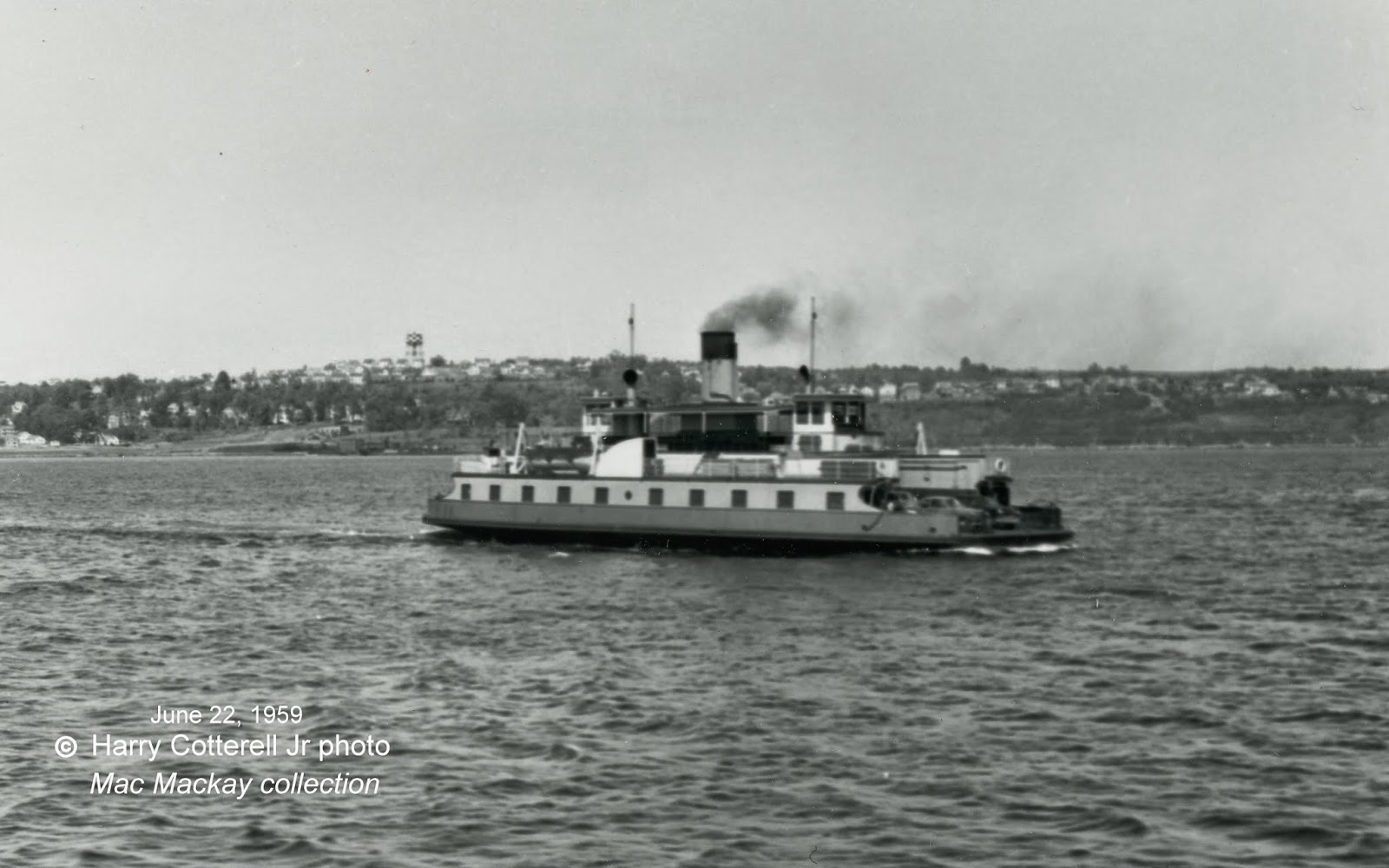 It was licensed for 550 passengers and could carry 18-20 vehicles. It lasted until 1957 when it was broken up at pier 9 in Halifax. Some of its components survived however. One of its wheelhouses was used in rebuilding the former Lurcher lightship as the coaster St-Yves. 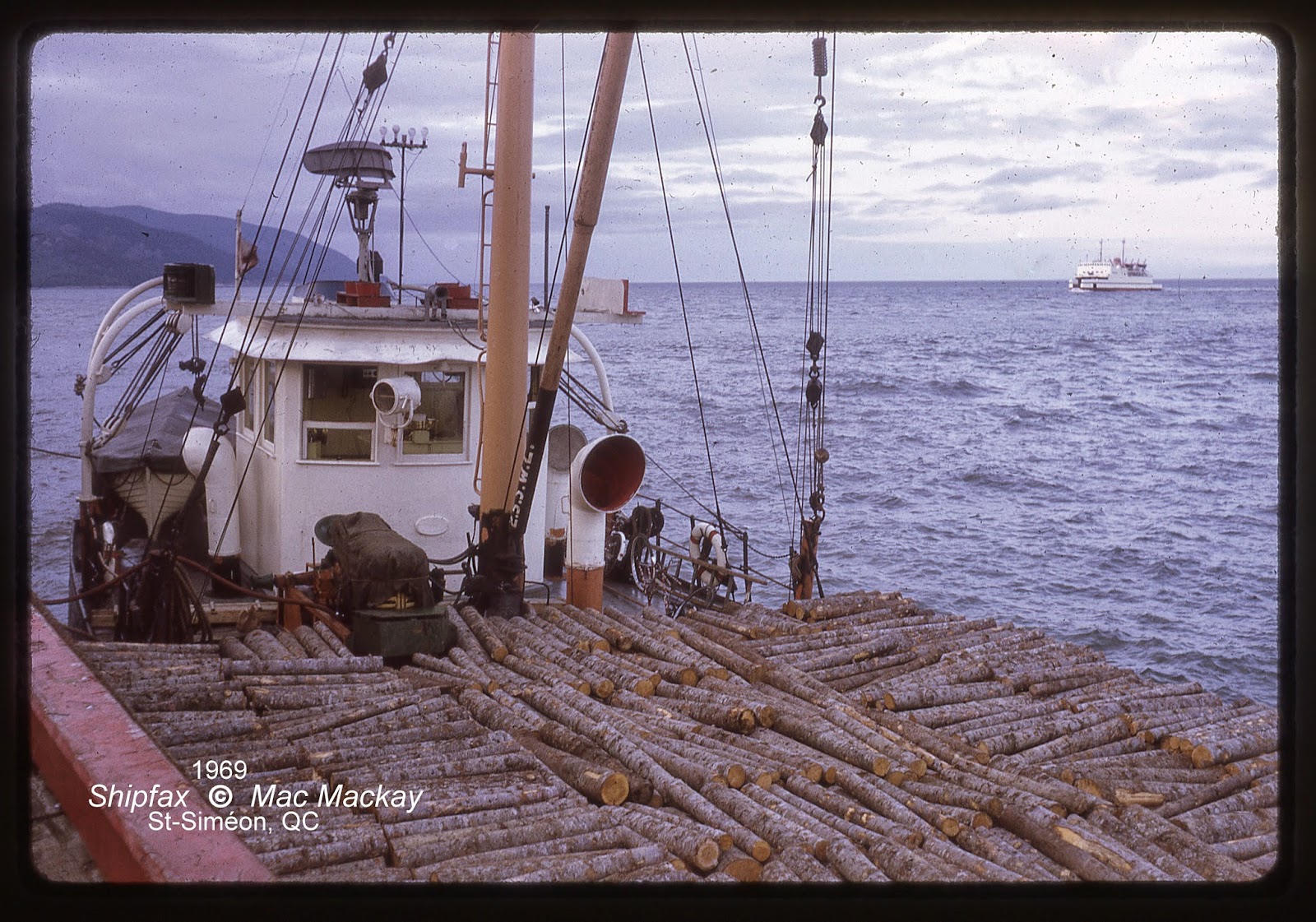 The lightship was converted in 1956-57 by Lunenburg Foundry, and in Halifax, and the coaster (and its recycled wheelhouse) worked on the St.Lawrence River until at least 1983 when the boat was finally lost or scrapped (accounts vary).


HALIFAX II  and DARTMOUTH II
With the opening of the  Angus L. Macdonald Bridge in 1956 the Dartmouth Ferry Commission realized that car and truck ferries were no longer needed, and ordered a pair of small pedestrian-only ferries.  They were originally intended to be steel vessels, but the tendered prices exceeded the budget. The ferry commission engaged W.J.Roue to redraw the plans for wood construction and Smith + Rhuland built the two boats in Lunenburg. 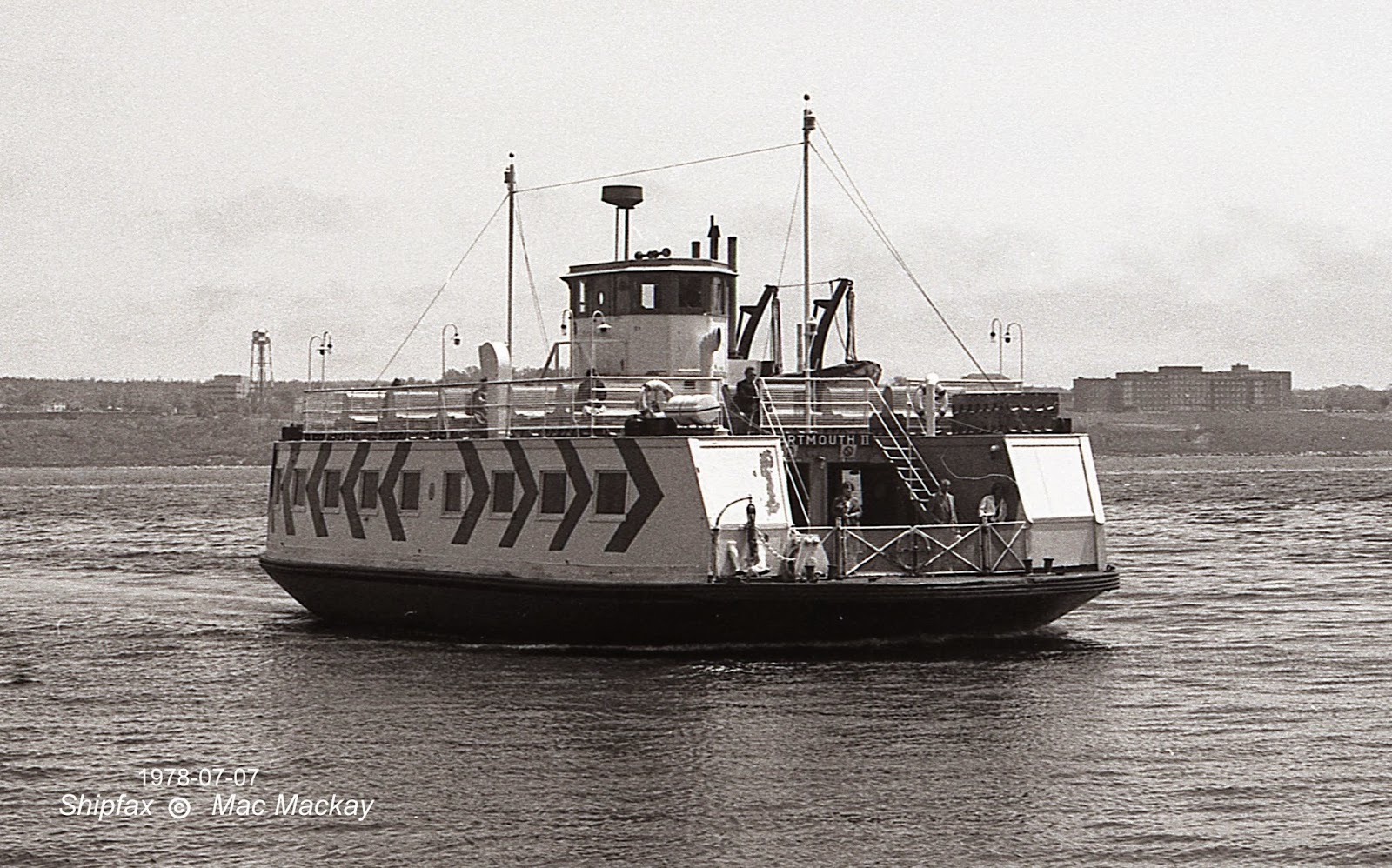 Halifax II was christened by Mrs. Dalton Randall (Capt. Randall was superintendent of the ferry operation) and launched July 27, 1956. Sister ferry Dartmouth II had been launched July 24, 1956 with Mrs. I.W. Akerley as sponsor (Mr. Akerley was the newly elected mayor of Dartmouth and chairman of the Ferry Commission).
The 171 grt boats were about 75 ft loa x 34.9 ft beam and were also double enders, with screws and rudders fore and aft, and two independently operated 260 bhp Cummins diesel engines. However the boats were operated from a single midships mounted wheelhouse. There were two cabins, port and starboard, originally designated for ladies and gentlemen, as were the previous generations of ferries, but they were soon integrated. 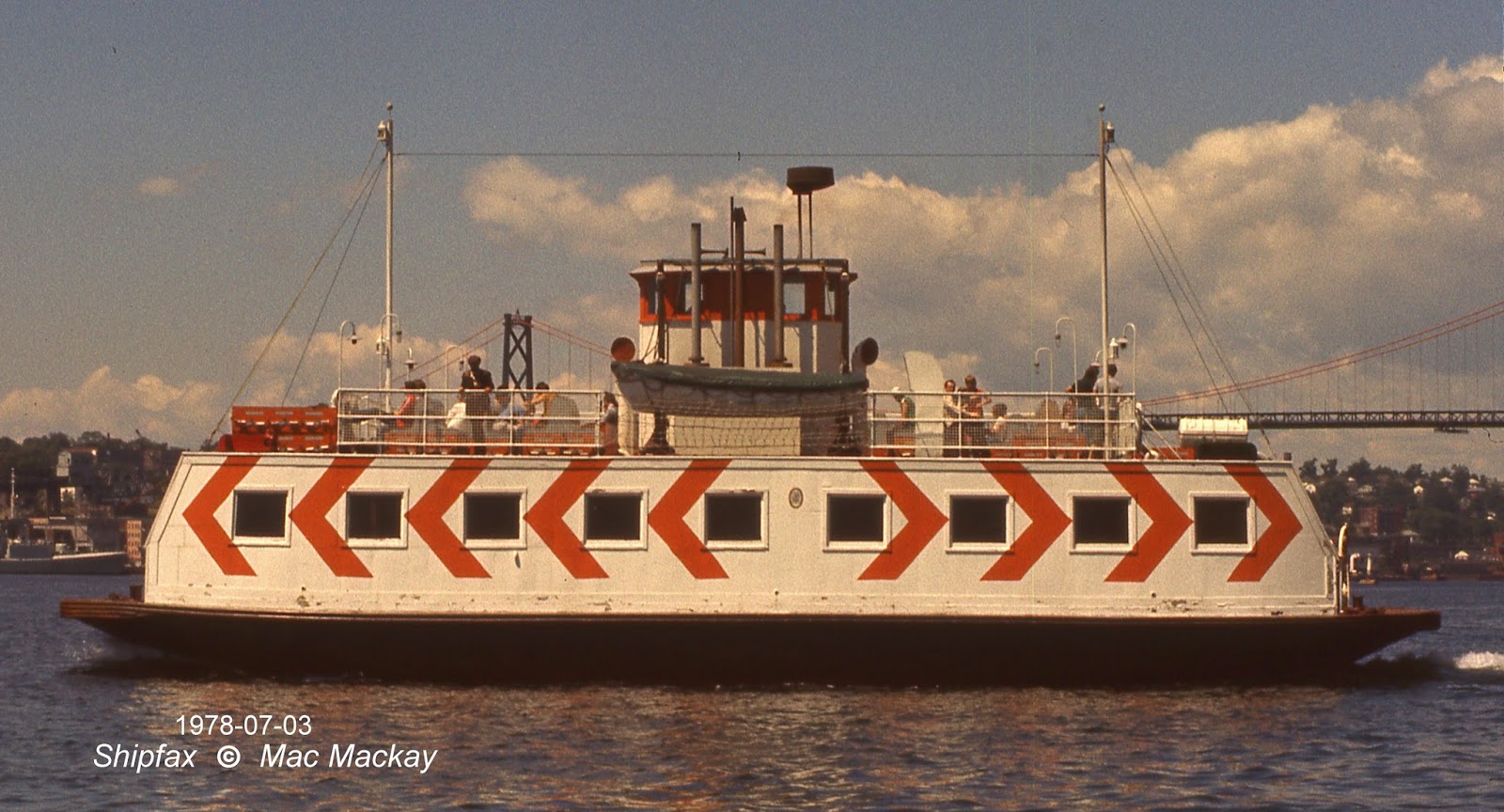 Orange chevrons were added in 1969 in an attempt to dress up the ferries' dowdy image, and were described as "mod". By the 1970s many passengers refused to use the cabins, which were described in the lingo of the day as "grotty", and remained out on deck in all weathers.

As the only boats in the fleet, they ran in tandem, without backups, between Halifax and Dartmouth until 1979. There were many incidents, and a few accidents over the years.

On December 23, 1963 Halifax II collided with the cable ship Lord Kelvin and then with sister Dartmouth II and sustained damage above the water line.

On July 26, 1979 Dartmouth II collided with he tug Point Viking acquiring a gaping hole 15 ft  x 7 ft above the waterline. Repairs were made with plywood, blanking out two windows on one side, to get the boat through to September when it was retired.

The most spectacular accident occurred January 29, 1977 when Dartmouth II parted her lines in a gale, went adrift and ran aground on the Dartmouth shore. It was towed off at high tide without damage by the tug Point Valiant. 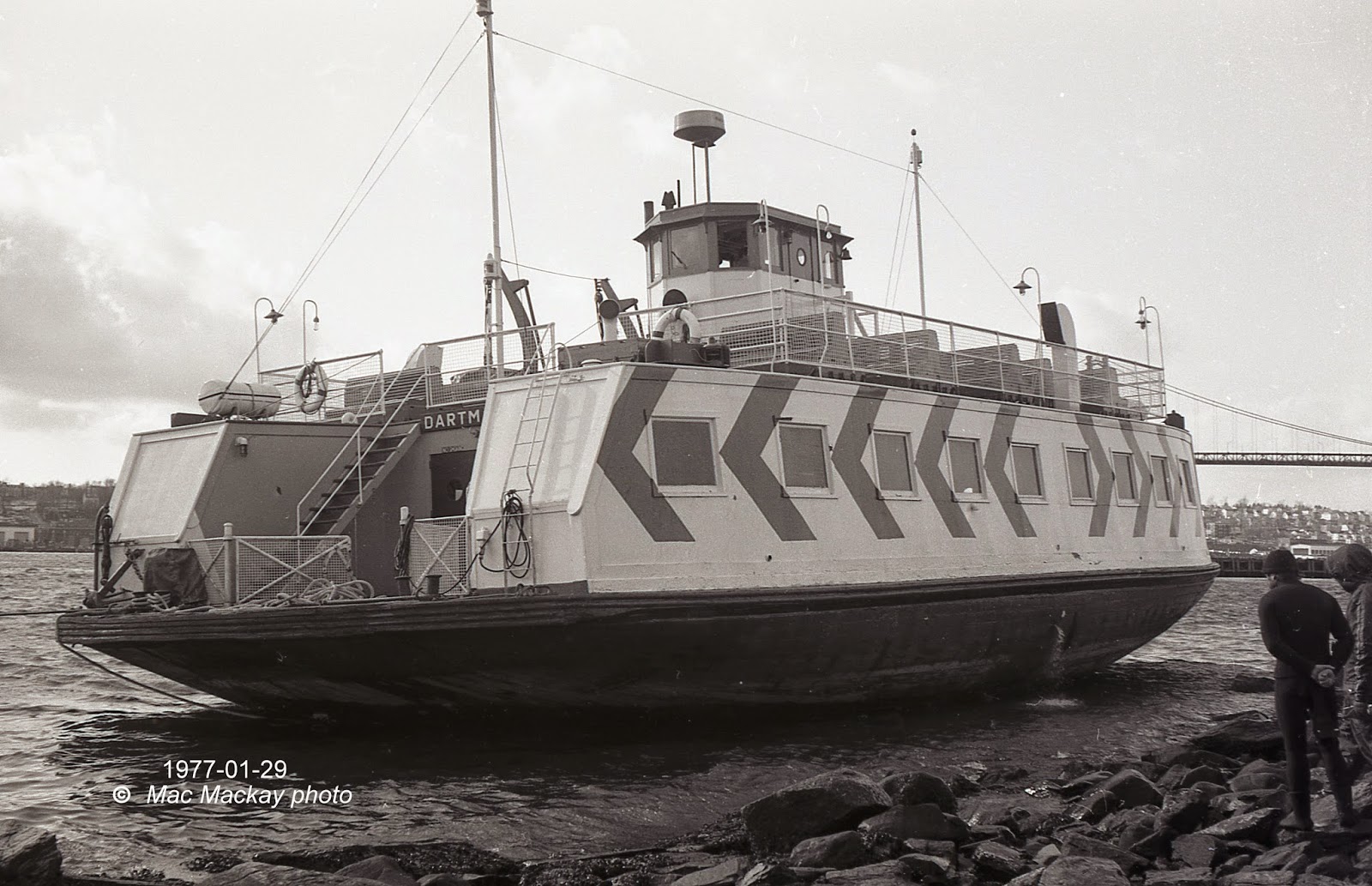 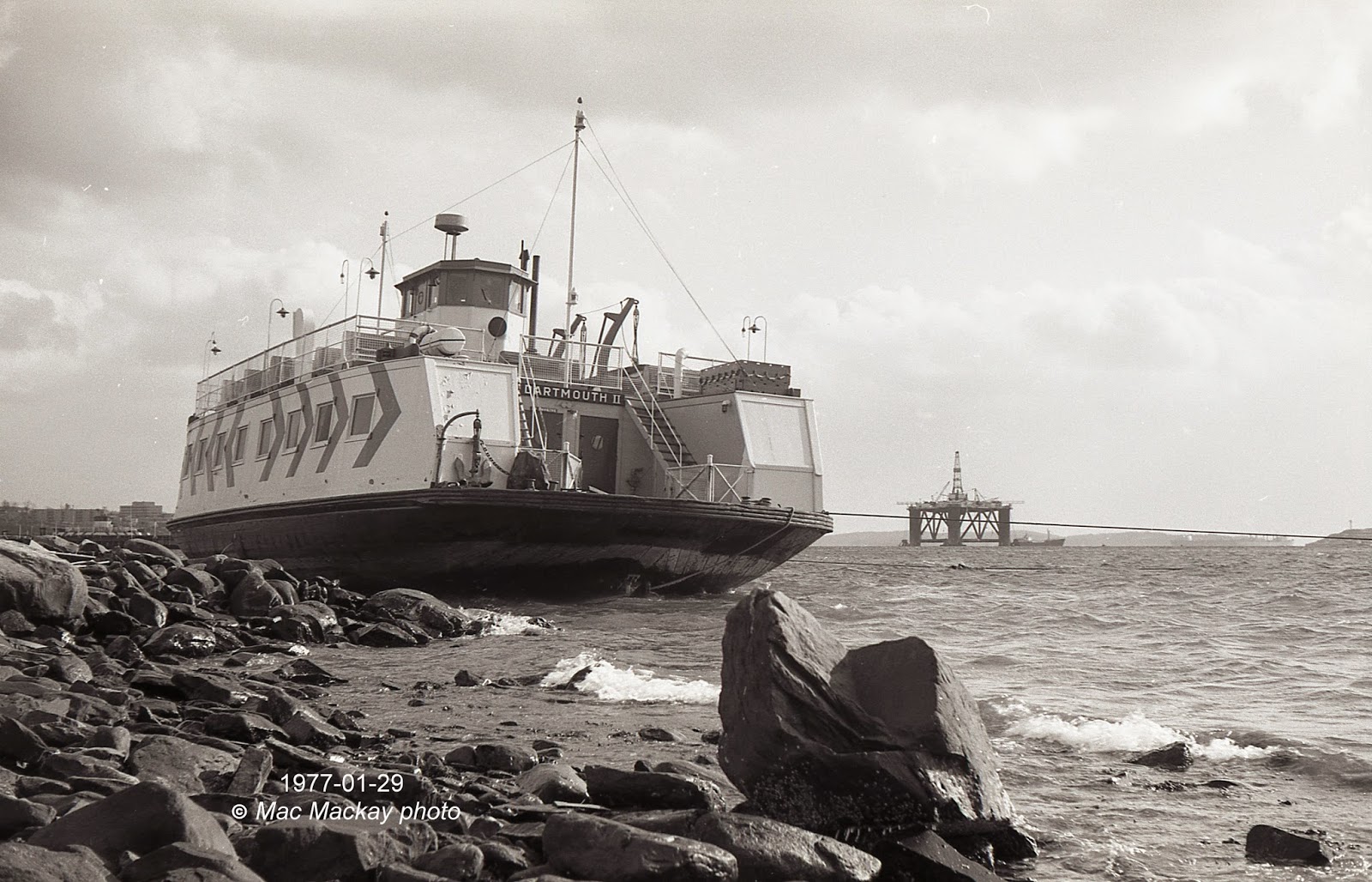 The boats' egg shaped hulls were quite durable and heavily fendered.

The boats were exceptionally sturdy and survived numerous bumps and scrapes when docking in Halifax and Dartmouth.

The pair served until September 9, 1979 when a new pair of ferries went into service. Although they only served for 23 years, they are well remembered as reliable - if funky.

The boats looked pretty drab by the time they were laid up, complete with plywood patches, and no attempt to repaint the chevrons.

Post ferry work, Dartmouth II ended up in LaHave, NS where it was advertised for sheriff's sale in April 1983, then again for sale in the Autotrader in June of the same year and still with its engines. By 1986 it was back in Halifax where it was converted to the non-propelled floating restaurant Lobsters Ahoy. 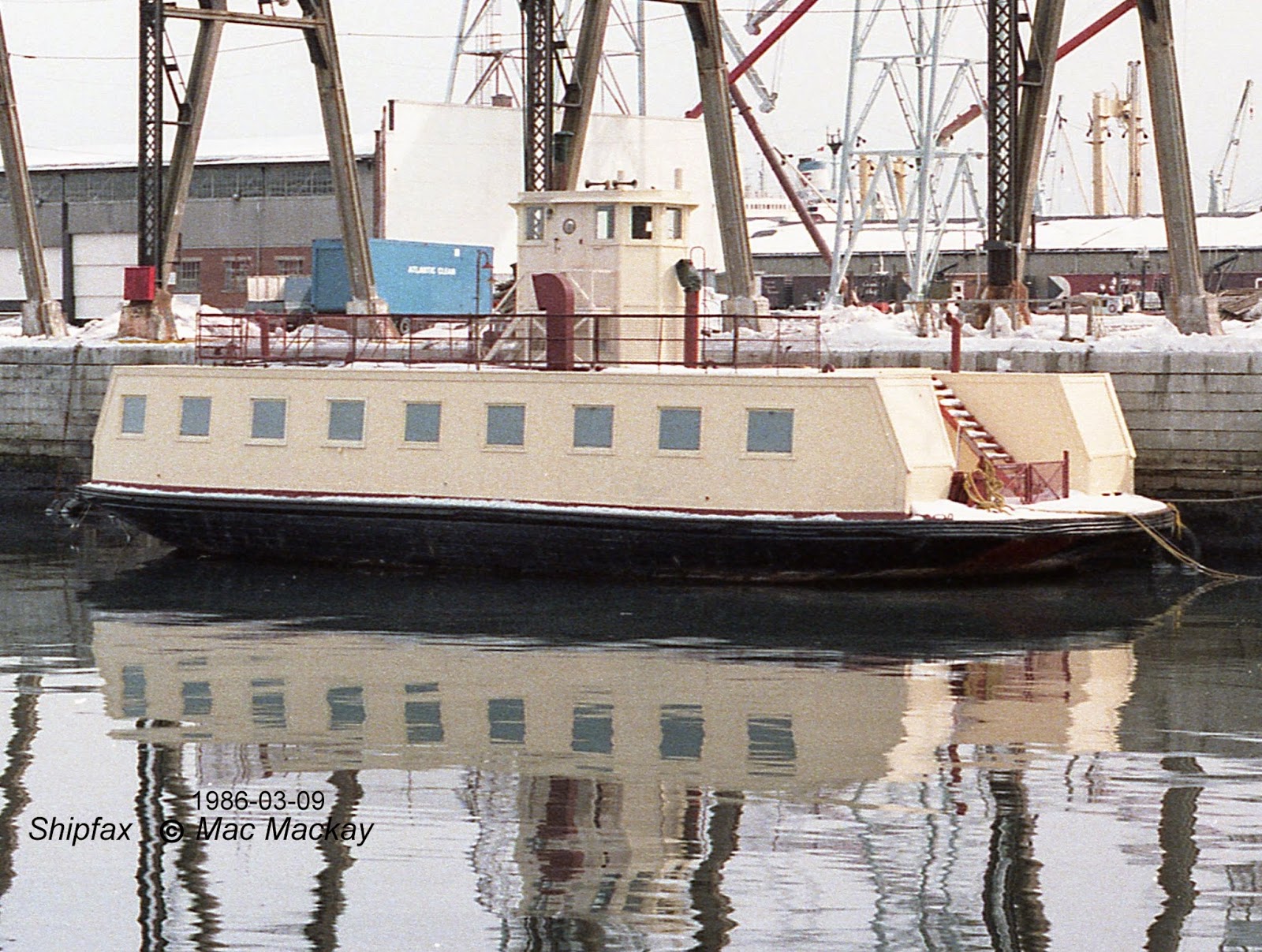 Dartmouth II at pier 25 undergoing conversion to a restaurant.

It berthed at the old ferry slip, where it sank October 18, 1992 when a bilge pump burned out. 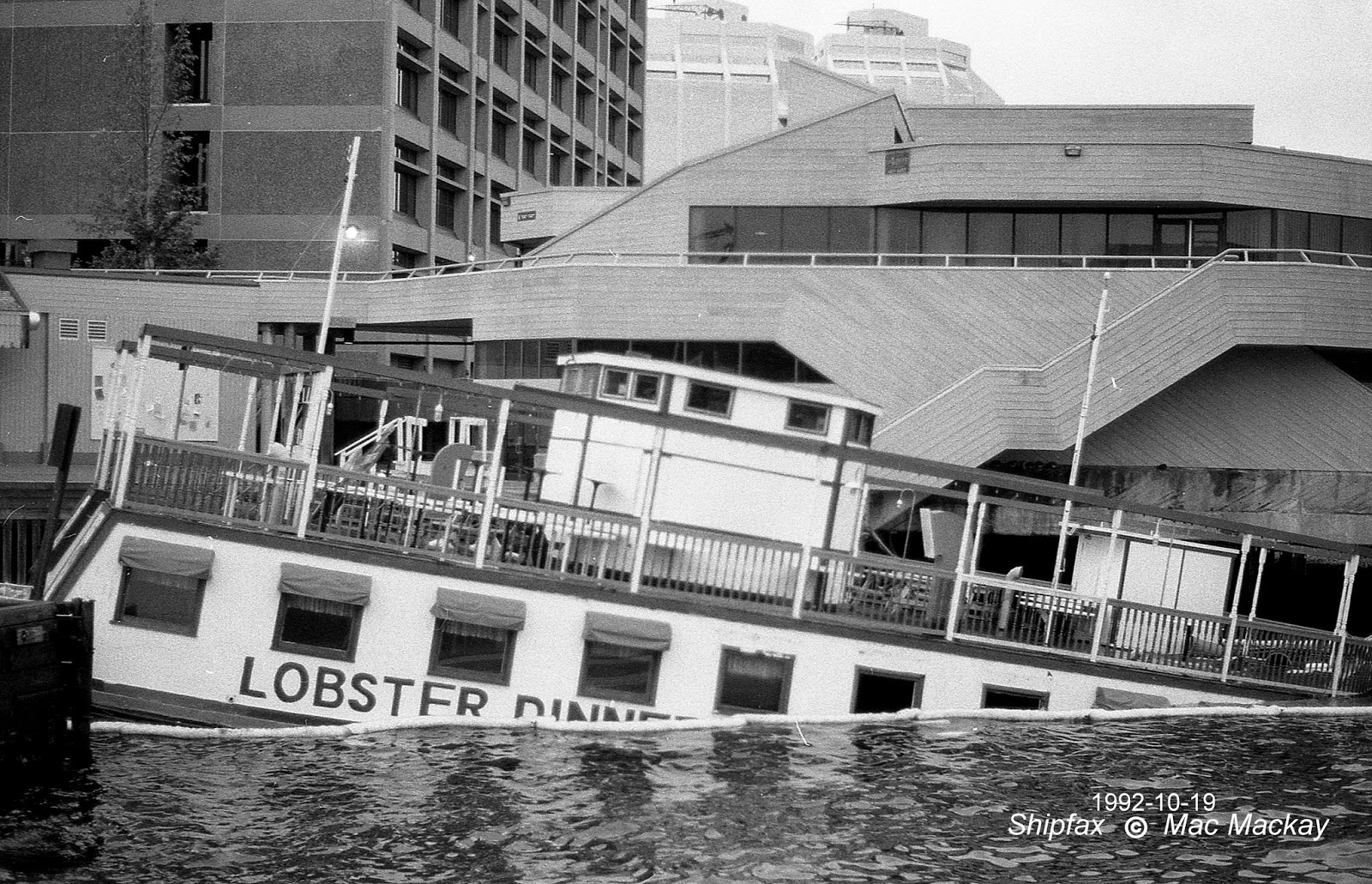 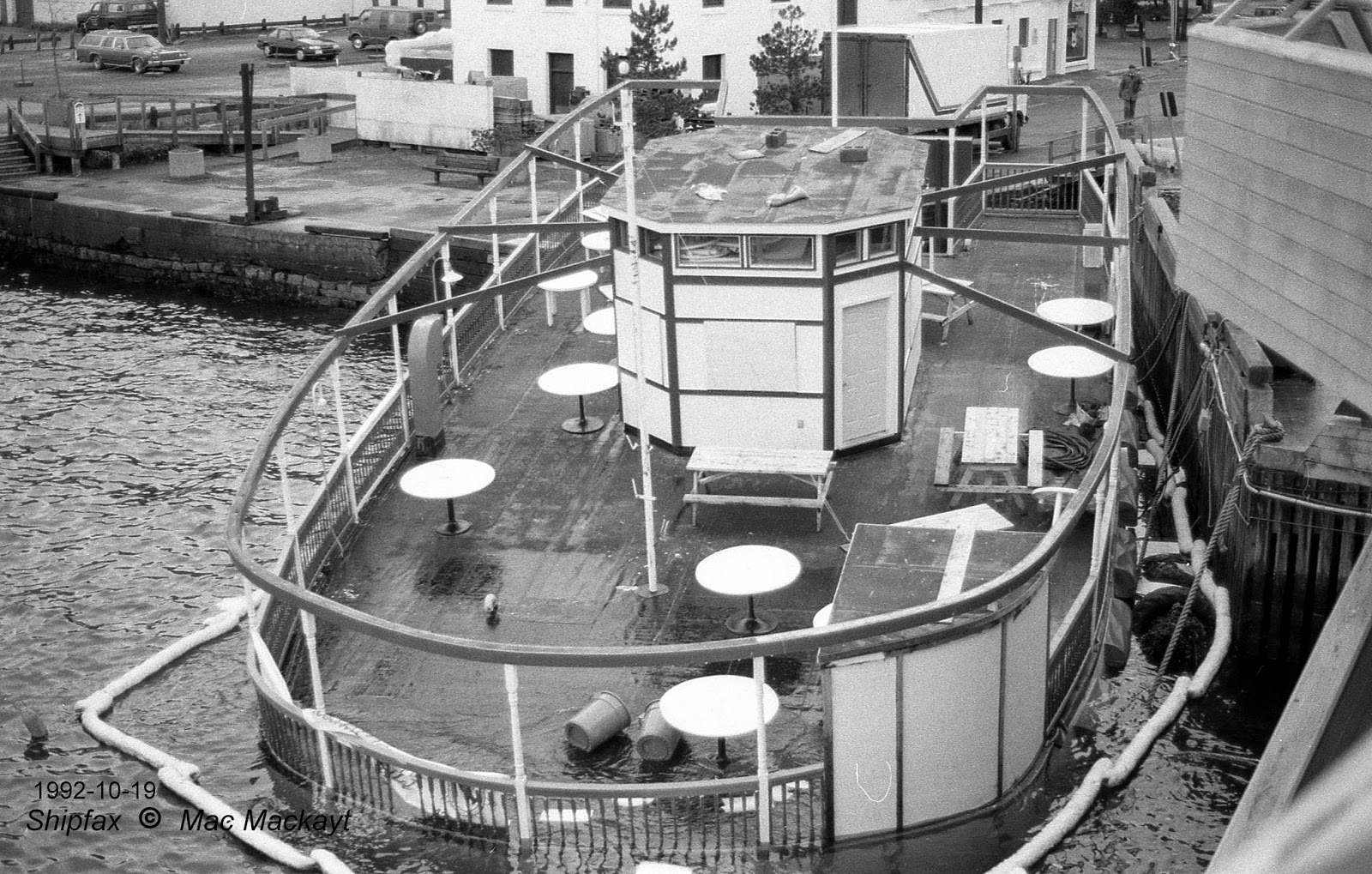 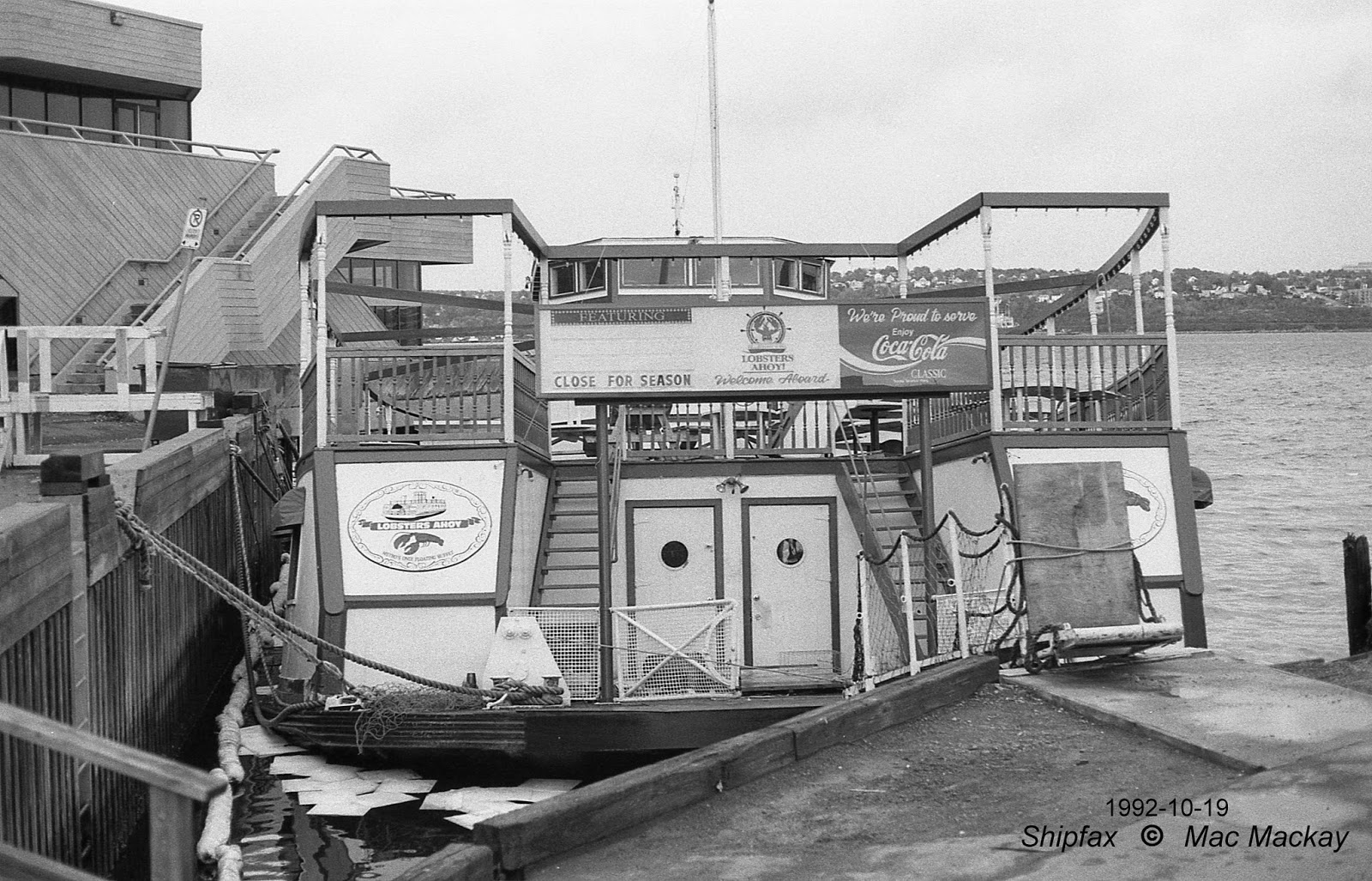 The boat was raised and was next sighted in Liverpool. NS in 1996, where it was being dismantled. 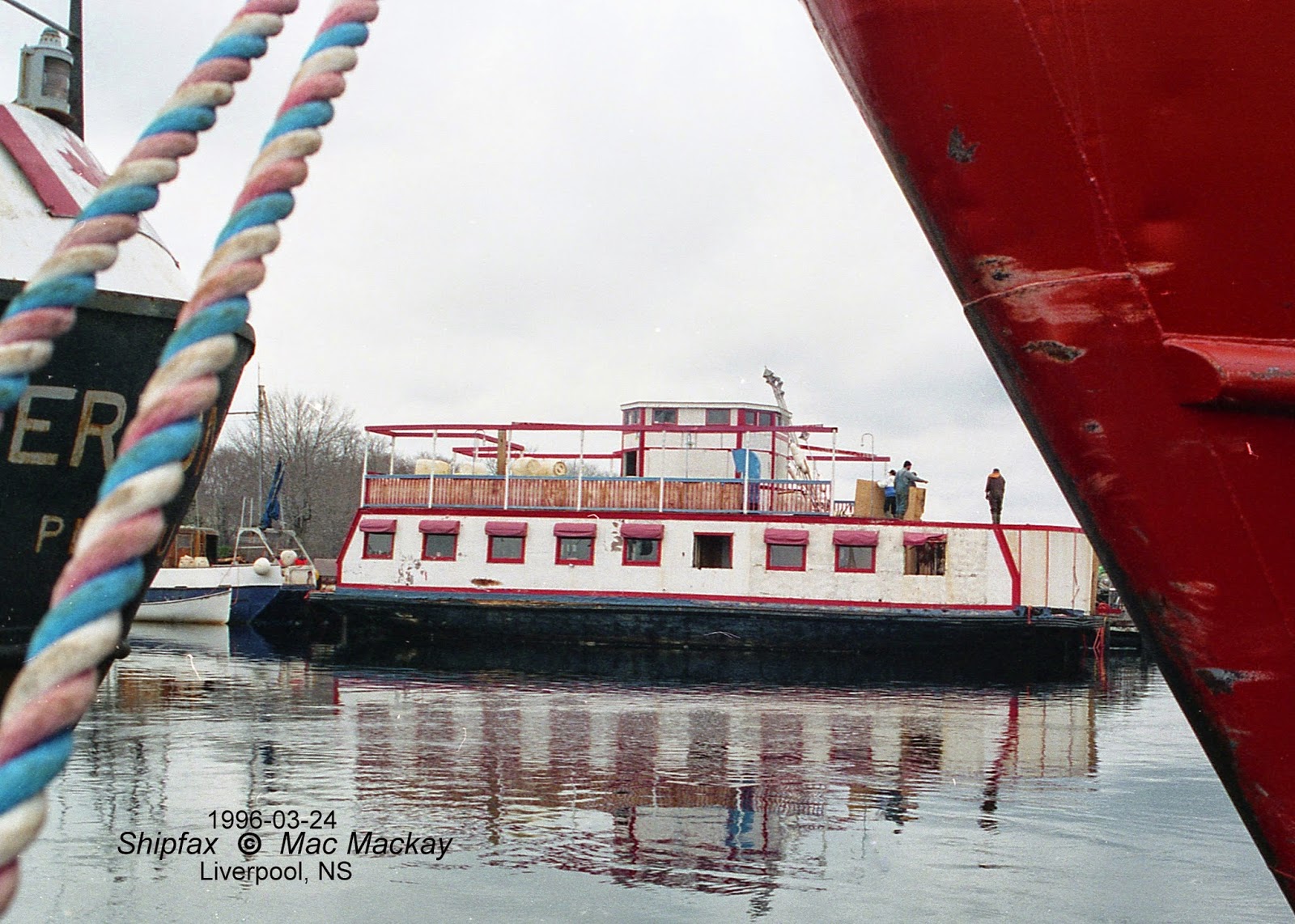 Although Dartmouth II was raised, it was never repaired. Considerably worse for the wear, it was being dismantled in Liverpool in 1996.

It is likely that the hull was used for fish farming for a time, but I lost track of it after that. Its registration was finally closed April 2, 2000.

Halifax II seems to have traveled extensively after its ferry days.It was purchased by H.B.Nickerson + Sons Ltd of North Sydney, NS and reduced to a barge and renamed Labrador II . Its wheelhouse became the gatehouse at Sydney Engineering and Drydock Co (which Nickersons owned) , and its hull was spotted in Canso in 1992 and in Jeddore in 1993, apparently working its way back to Halifax! It looked like it was being used as a work float for dismantling some old trawlers, and probably did not survive long after that work was done. 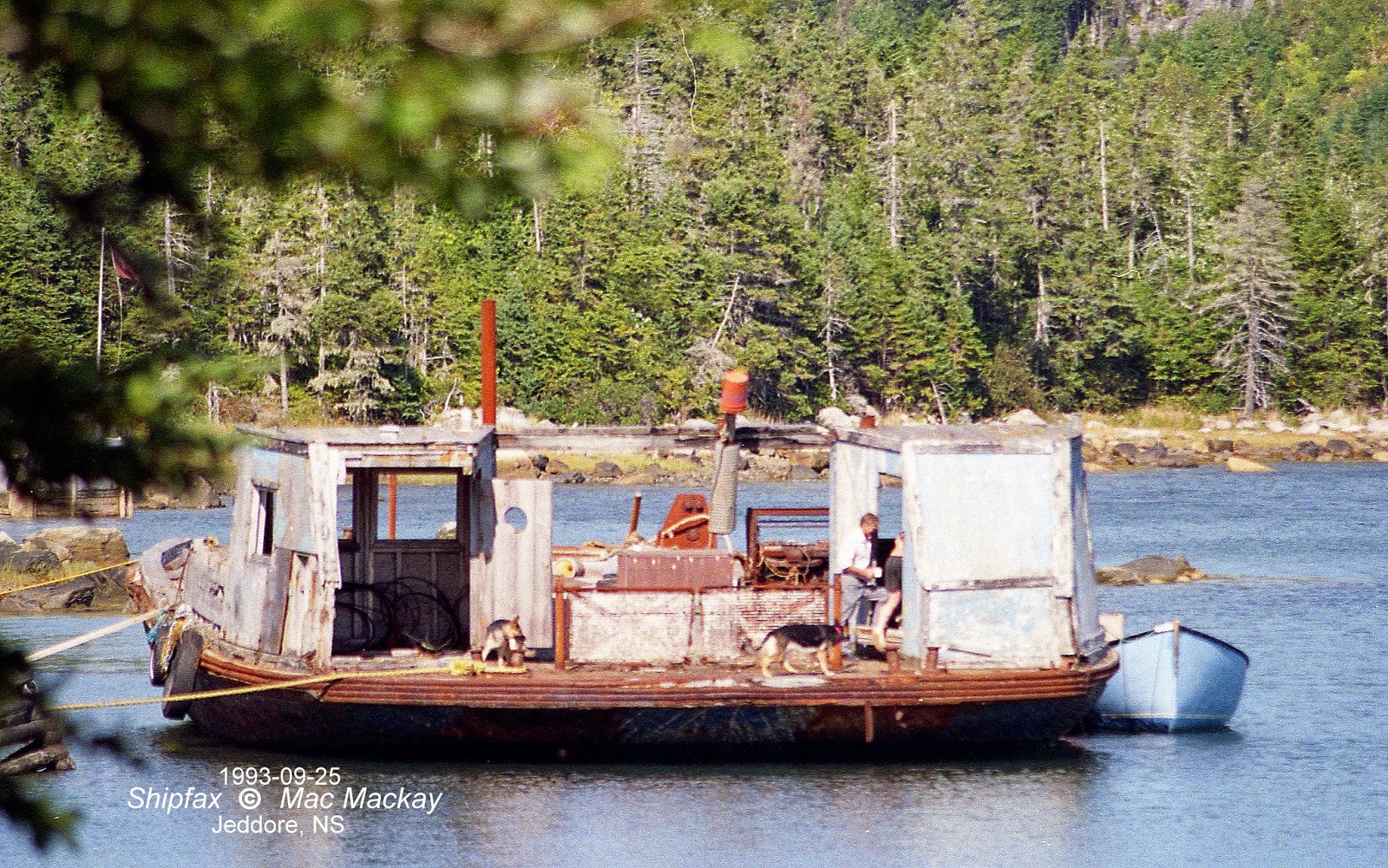 Required Reading: For those interested in the history of the Dartmouth ferry service, the definitive story is contained in a book entitled Like a Weaver's Shuttle by Joan and Lewis Payzant. It was written in 1979 but can still be found on line and in used book shops.

To be continued for HALIFAX III and DARTMOUTH III
Posted by Mac at 7:23 PM